The NHL Players’ Association and the NHL’s Board of Governors voted overwhelmingly on Friday to ratify a sweeping agreement that includes a six-year Collective Bargaining Agreement and a Return to Play Plan that brings hockey back after a historic, 142-day pause.

According to sources, the NHLPA’s full membership voted 502 to 135 with 78.8 per cent in favour, while the league’s vote was unanimous, as expected. Both only required simple majorities to pass.

NHL commissioner Gary Bettman lauded the stakeholders involved “for coming together under extraordinary circumstances for the good of our game.”

“This agreement is a meaningful step forward for the players and owners, and for our game, in a difficult and uncertain time,” NHLPA executive director Don Fehr said in a statement.

Yes, the road back to the rink is one paved in peril, but the lure of hockey’s holy grail and more than a 100 years of history is on the other side.

The NHL and NHLPA must safely navigate the arrival of 744 players and hundreds of staffers in two secure ‘bubbles’ in Toronto and Edmonton and avoid a mass-outbreak of COVID-19 in order to drop the puck in three weeks from Saturday on Aug. 1.

Once settled inside, the NHL is confident its strict protocol will minimize the risk of an outbreak in an effort to award the Stanley Cup by Oct. 4 in Edmonton. Every player and every person – from team staff to hotel housekeepers – who has a chance of coming in contact with a player will be tested daily. Any positive test will require isolation and contact tracing. The NHL says it can manage individual or multiple isolated positive tests, but it has not defined what it would take to put play on pause again or put a pin in the bubble, either due to health risks or the integrity of the game.

“While we have all worked very hard to try to address the risks of COVID-19, we know that health and safety are and will continue to be our priorities,” Bettman said Friday.

Cautiously make it through training camp. Then into the bubble without many flare-ups.

What awaits is March Madness on steroids. The blood-and-guts intensity of the Stanley Cup playoffs, for 14 hours a day, for nine days straight. And then the first round begins.

To start, it will be games from 12 noon well past midnight in the East – or longer with the delirious joy of playoff overtimes. 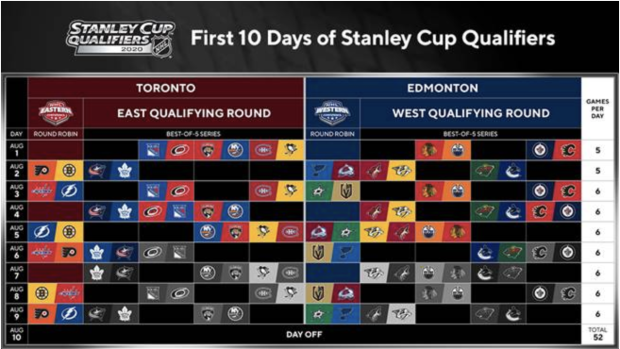 The NHL’s top eight teams will battle each other in round-robin games for seeding, while the other 16 teams will fight in a best-of-five to see who survives to the first round of the Stanley Cup playoffs. Then a traditional, 16-team playoff with four rounds decided by best-of-seven, will take over as planned.

Everyone, even the losing teams, have something to look forward to in the qualifying round.

Every player in the hubs will have the day off on Aug. 10, when the Draft Lottery is scheduled to take centre stage. The eight teams that fail to qualify for the playoffs will go home with an equal 12.5 per cent chance at the No. 1 overall pick and Alexis Lafreniere.

With Oct. 4 scheduled as the last possible day of the Stanley Cup Final, the 2020 NHL Draft is tentatively slated for Oct. 9-10 and will likely be held virtually.

Until then, with the only travel scheduled for when the Toronto hub victors shift to Edmonton by Sept. 8 to begin the Conference Finals, the NHL plans to zoom through each round as quickly as possible in order to minimize time spent in the bubble. 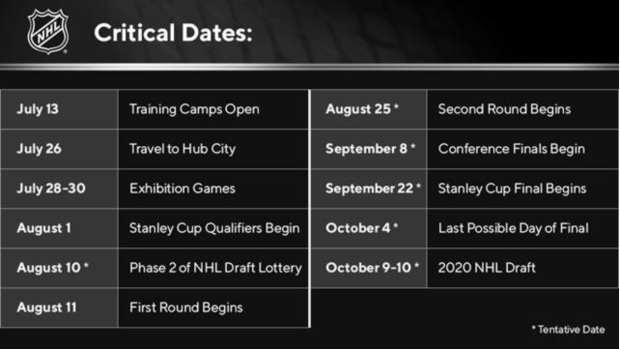 There will be sacrifice for all involved. Players advancing will go a minimum of five weeks away from their families before they are permitted to enter the bubble during the Conference Finals. The hundreds of staffers and officials will not have the same opportunity.

The motivation to complete the 2019-20 season in the face of a pandemic is undoubtedly driven by business. More than $400 million USD is at stake in a two-month tournament, plus the priceless tradition of carrying on the Stanley Cup.

The NHL and its players have faced the grim financial reality that remains. The new six-year CBA, which guarantees labour peace through at least 2025-26, is not a rosy one for the players. It’s akin to an adjustable rate mortgage – with the players paying back the owners a nine-figure promissory note – with the resulting escrow cap serving as the interest rate.

During that time, the players’ house won’t appreciate much in value because there is little room for growth with a relatively frozen salary cap for much of the next four or five seasons. Only the NHL’s best and brightest stars won’t feel the cap crunch coming.

The trouble for the players – and really the hawk owners who wanted the entire amount owing from players to be paid back now on the spot – was that there wasn’t much of a viable alternative.

That meant Friday, even with more than a fifth of the NHL’s players expressing their dissatisfaction, was the next in a series of critical (if not plodding) steps forward to get the game going again.

Some 368 days after the season started, Lord Stanley’s chalice awaits now – if COVID can cooperate.

What you need to know about the coronavirus right now