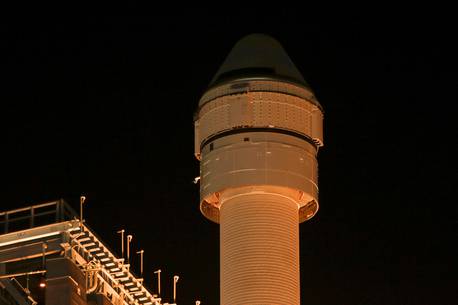 WASHINGTON (Reuters) – Boeing Co’s Starliner astronaut spacecraft made a “bull’s-eye” landing in the New Mexico desert on Sunday, a successful ending to a crewless test mission that two days earlier failed to reach the orbit needed to dock with the International Space Station.

The 7:58 a.m. ET (1258 GMT) landing at the White Sands desert capped a turbulent 48 hours for Boeing’s botched milestone test of an astronaut capsule that is designed to help NASA regain its human spaceflight capabilities.

A software problem on Friday caused the capsule to fail to attain the orbit needed to rendezvous with the space station, another unwelcome engineering black eye for Boeing in a year that has seen corporate crisis over the grounding of its 737 MAX jetliner following two fatal crashes of the aircraft.

Officials from the aerospace company and NASA breathed sighs of relief following the landing, a highly challenging feat.

“Today it couldn’t really have gone any better,” Boeing space chief executive Jim Chilton told reporters on Sunday, adding that experts would need weeks to analyze the data from this mission before determining if Boeing could move forward with its plan to send a crewed mission on the craft in 2020.

The landing, which tested the capsule’s difficult reentry into the atmosphere and parachute deployment, will yield the mission’s most valuable test data after it failed to meet one of its core objectives of docking to the space station.

“We’re going to get I think a lot more data than we would have gotten if the test had gone according to plan,” NASA Administrator Jim Bridenstine said.

After Starliner’s touchdown, teams of engineers in trucks raced to inspect the vehicle, whose six airbags cushioned its impact on the desert surface as planned, a live video feed showed.

The spacecraft was in good condition after landing, Chilton said, with little charring and stable air pressure and temperature in the cabin.

The CST-100 Starliner’s debut launch to orbit was a milestone test for Boeing. The company is vying with SpaceX, the privately held rocket company of billionaire high-tech entrepreneur Elon Musk, to revive NASA’s human spaceflight capabilities. SpaceX carried out a successful unmanned flight of its Crew Dragon capsule to the space station in March.

After the Starliner capsule was launched from Florida on Friday, an automated timer error prevented it from attaining the right orbit to meet and dock with the space station.

Starliner’s three main parachutes deployed just over one mile (1,600 meters) from the Earth’s surface on Sunday after enduring intense heat from the violent reentry through the atmosphere, plummeting at 25 times the speed of sound.

The parachute deployment, one of the most challenging procedures under the program to develop a commercial manned space capsule, earned Boeing a win after a previous mishap where one parachute failed to deploy during a November test of Starliner’s abort thrusters.

That test tossed the capsule miles into the sky to demonstrate its ability to land a crew safely back on the ground in the event of a launch failure.

For the current mission, Boeing and NASA officials said they still do not understand why software caused the craft to miss the orbit required.

All past U.S. capsules, including SpaceX’s Crew Dragon, splashed down in the ocean. Russia’s Soyuz capsules and China’s past crew capsules made land landings.

The now-retired Space Shuttle used to glide in like a massive plane. (Graphic: https://tmsnrt.rs/2Q8mzCR)

Starliner Spacecraft's Landing on Sunday a Critical Moment for Boeing and NASA – Space.com

HELSINKI —
Norwegian experts say an unusually large meteor was visible over large parts of southern Scandinavia and illuminated southeast Norway with a powerful flash of light for a few seconds as many observers were reported to also hear a roaring sound afterwards.

“The meteor appeared at 1:08 a.m. on the night of July 25 and was visible for approximately for 5 seconds,” said the network said, which had posted a video on the phenomenon on its Twitter site.

Sightings of meteors, space rocks that burn brightly after entering the Earth’s atmosphere at high speed, aren’t uncommon over Norway and the Norwegian Meteor Network has a number of cameras continuously monitoring the sky.

A meteor that survives passage to the ground is known as a meteorite.

Preliminary data suggested a meteorite may have hit Earth in a large forested area, Finnemarka, not far from Oslo, the Norwegian Meteor Network said.

At least one in 10 young Black adults across Canada has reported contracting the coronavirus during the pandemic — a rate that is two and a half times that of the general population, a new survey has found.

Researchers from McGill University and the Black Community Resource Centre of Montreal commissioned the Léger polling firm to conduct a national survey in January of 346 Black-identifying Canadians between the ages of 18 and 35. Most of the respondents of the online survey came from Ontario, 43 per cent, followed by Quebec at 35 per cent.

The survey sought to assess family and peer support among young Black adults during the twin crises of the pandemic and the Black Lives Matter movement following the choking death of George Floyd by a police officer.

Richard Koestner, one of the authors of the study and the director of the McGill Human Motivation Lab, said the 10-per-cent figure among Black Canadians is likely an under-estimate. The preprint of the study is under review by the Journal of Black Psychology.

To date, testing has confirmed COVID-19 in 3.75 per cent of the Canadian population, according to the latest government figures. In Quebec, the rate is 4.38 per cent.

The findings of the study add to a body of research that the pandemic has disproportionately harmed racialized communities around the world. Koestner and his colleagues alluded to U.S. research that found that COVID-19 infection rates in Black communities have been twice as high and death rates three times as high as the general population.

“There is growing concern that racial and ethnic minority communities around the world are experiencing a disproportionate burden of morbidity and mortality from (COVID-19),” conclude the authors of a separate study that examined the impact of the pandemic on U.S. veterans.

And in a study released this month by the Public Health Agency of Canada, the authors renew calls for the collection of racial data not only to better study COVID-19 but to go “beyond the scope of the pandemic to identify disparities in health care and find solutions to minimize this gap.”

“Increased risk of COVID-19 infection has frequently been linked with socioeconomic factors such as poor housing and precarious employment,” the authors add. “The intersection of race, socioeconomic status and health is of particular importance to racialized persons, who consistently report higher rates of working poverty, below-standard housing and lower income.”

Seeta Ramdass, a longtime patient-rights advocate in Montreal, noted that unconscious bias often creeps into health care. She cited as an example the pulse oximeter placed on a patient’s finger to detect oxygen saturation in the blood. Such devices are considered less accurate when measuring black and brown skin.

“The refusal and failure to collect sociocultural data is systemic racism,” Ramdass said. “By failing to acknowledge and to document the inequitable experiences of racialized and marginalized people, how can you even begin to put the corrective measures in place that will make society more inclusive and responsive toevery person of every community?”

All our coronavirus-related news can always be found at montrealgazette.com/tag/coronavirus.

Sign up for our email newsletter dedicated to local COVID-19 coverage at montrealgazette.com/coronavirusnews.

Help support our local journalism by subscribing to the Montreal Gazette here.

Astronomers have discovered evidence of water vapor in the atmosphere of Jupiter’s moon Ganymede for the first time.

Ganymede, the largest moon in the solar system, is covered in an icy crust. Scientists believe Ganymede may have a liquid ocean 100 miles beneath its surface, and that such an ocean could host aquatic alien life.

On Monday NASA announced that, by looking through the last two decades of data from the Hubble Space Telescope, researchers had discovered evidence of water vapor in the Jupiter moon’s thin atmosphere. This water probably doesn’t come from the underground ocean, though. Instead, it’s likely ice vaporizing from the moon’s surface.

Even though it doesn’t say much about the moon’s potential for alien life, this water vapor adds to scientists’ understanding of Ganymede’s atmosphere. Previously, they only knew that it contained oxygen.

“So far only the molecular oxygen had been observed,” Lorenz Roth of the KTH Royal Institute of Technology in Stockholm, Sweden, who led the team who found the vapor, told NASA. “This is produced when charged particles erode the ice surface.”

The research and datasets were published in the journal Nature Astronomy.

This is a developing story. Please check back for updates.