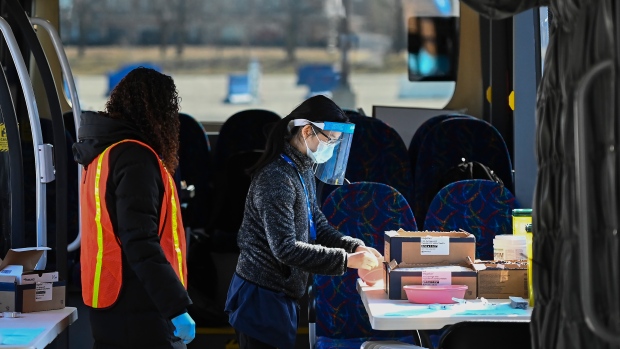 TORONTO —
Health officials in Ontario are reporting more than 2,300 new COVID-19 infections, marking the sixth consecutive day in which case numbers have remained above the 2,000 mark.

With 36,071 tests processed in the last 24 hours, the province says its COVID-19 positivity rate stands at 6.2 per cent, representing an increase of .1 per cent over the previous day.

Fourteen deaths related to the disease were recorded in the previous 24-hour period, according to data made available by the Ministry of Health.

Meanwhile, the province reported its highest number of COVID-19-related hospitalizations since early February.

Of those patients, 387 are being treated in the ICU and 249 are breathing with the assistance of a ventilator.

A new report from Ontario’s science advisory table released Monday showed that COVID-19 variants of concern now account for 67 per cent of all lab-confirmed cases in the province.

Moreover, the report revealed that those infections are starting to have a “substantial impact” on the healthcare system due to a higher likelihood of hospitalization and even death.

Toronto, Peel Region, and Hamilton are currently operating in the grey zone of the province’s colour-coded COVID-19 framework, which holds the strictest levels of public health measures short of a complete shutdown of all non-essential businesses.

Last week, the province adjusted its emergency brake system to allow for the immediate implementation of the restrictions found in the previously lifted province-wide shutdown if there is a “rapid acceleration” of COVID-19 transmission in any public health unit.

The updated protocol also allows the brake to be used if a public health unit’s health system is at risk of becoming overwhelmed.

“410 COVID ICU patients. 46 new patients since yesterday which is a one-day record. Claiming there are ICU beds which can’t be staffed won’t help us. @ongov has lost control over the pandemic. Please stay home if you can,” he said while citing data from a Critical Care Services Ontario report.

410 #COVID ICU patients
46 new patients since yesterday which is a one-day record.

Claiming there are ICU beds which can’t be staffed won’t help us. @ongov has lost control over the pandemic.

Please stay home if you can.

York Region, Durham Region, and Ottawa are currently placed in the red zone, which allows for such non-essential activities as indoor dining at restaurants and bars, with a limit of 50 per cent capacity or 50 people, whichever is less.

The province confirmed another 51 cases of the COVID-19 variant known as B.1.1.7 Tuesday, pushing the case total for the strain that was first found in the U.K. to 1,800.

Eight cases of P.1 (Brazilian variant) were also confirmed, which pushes the case total to 90.

Six more cases of the B.1.351 (South African variant) were also found, bringing the case total to 69.

More than 20,100 cases have screened positive for a mutation but have not yet been linked to a known variant of concern.

The province says 313,889 people have received both their first and second shots of a COVID-19 vaccine and are considered to be fully vaccinated.

More than 2.1 million needles have gone into arms since the province began inoculating residents in December with 70,645 shots administered yesterday.

The numbers used in this story are found in the Ontario Ministry of Health’s COVID-19 Daily Epidemiologic Summary. The number of cases for any city or region may differ slightly from what is reported by the province, because local units report figures at different times