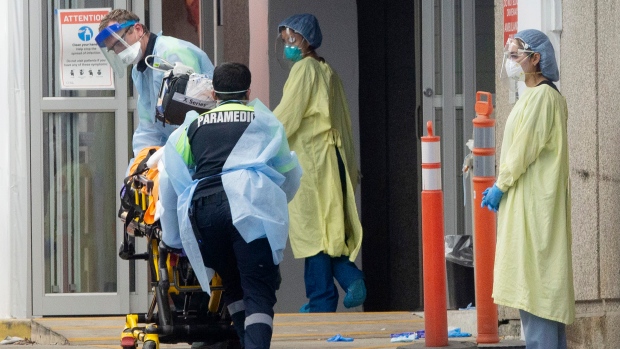 TORONTO —
Ontario is reporting more than 6,000 new COVID-19 cases over the past two days as the number of patients in intensive care hits a pandemic high.

Health officials reported 3,089 new COVID-19 on Friday and 3,009 on Saturday. The Ministry of Health did not report numbers yesterday due to the Good Friday holiday.

The last time cases reached this high in Ontario was back on Jan. 17 when 3,422 new infections were reported.

Health officials also reported that 39 more people have died in Ontario due to COVID-19 in the past two days.

In total, the province has seen 7,428 deaths related to the COVID-19 since the start of the pandemic.

The seven-day rolling average of new cases now stands at 2,552, compared to 1,944 seven days ago.

Officials reported on Saturday that 796 people are currently in hospital due to the disease. At least 451 of these patients are being treated in intensive care, which is a pandemic high. More than 260 of those 451 patients are breathing with the assistance of a ventilator.

The province also deemed 1,819 more cases of the disease to be resolved as of Saturday, bringing Ontario’s number of recovered patients up to 327,940.

Saturday’s report brings the total number of lab-confirmed cases in Ontario to 358,558 including deaths and recoveries.

Most of the new cases reported on Saturday are concentrated in hot spot regions in the Greater Toronto Area. Officials reported 954 new cases in Toronto, 434 in Peel Region and 348 in York Region.

There were 145 new infections reported in Middlesex-London.

Since the province began actively searching for COVID-19 variants of concern in Ontario, there have been 24,459 mutations discovered in lab-positive tests.

Of those mutations, officials found 938 in the last 24-hour period.

While the province has discovered thousands of variant mutations, only 2,214 have undergone genome testing in order to be officially categorized.

The province reports that 321,469 people in Ontario have received both doses of the COVID-19 vaccine and are now considered immunized against the disease.

In the last 24-hour period, officials said that 59,567 doses of the vaccine were administered to residents in the province.