Ontario reported another 1,468 cases of COVID-19 on Saturday as well as 11 new deaths.

With the exception of March 8, when a data issue caused the case count to be artificially inflated by about 300 cases, this morning’s number is the highest on a single day since Feb. 7.

The seven-day average of daily cases — which helps to clarify long-term trends in the data — rose to 1,337, marking eight straight days of increases in that figure.

Tam noted that there are currently upwards of 30,780 active cases nationwide, and while activity has been “levelling off… for a few weeks, average daily case counts remain high and we are now observing a recent increase.”

Fears of a third wave have been particularly loud in Ontario in the last week.

“It’s almost like a dystopian plot in a movie,” epidemiologist Dr. Tim Sly, a professor emeritus at Ryerson University in Toronto, told CBC News earlier in the week. “On the horizon ahead you’ve got the vaccine cavalry… and on the other horizon you’ve got the mutants, all lined up, a motley bunch.”

In her statement, Tam urged Canadians to remain vigilant.

“While vaccine programs begin to accelerate, it will be important to maintain a high degree of caution,” she said.

The additional cases reported today include 381 in Toronto, 226 in Peel Region and 168 in York Region, according to Minister of Health Christine Elliott.

Some family doctors in Toronto, Peel Region, Hamilton, Guelph, Peterborough and Simcoe-Muskoka have been shipped some 29,500 doses of the Oxford-AstraZeneca vaccine to administer to people aged 60 to 64 years old.

People are being asked not to call their doctor’s office as physicians will reach out to those who are eligible for the vaccine.

A separate pilot project involving pharmacies is also up and running. In that case, people born between 1957 and 1961 are eligible to receive the Oxford-AstraZeneca vaccine at select pharmacies province wide.

The National Advisory Committee on Immunization (NACI) has recommended against using the AstraZeneca vaccine for people older than 65. However, NACI head Dr. Caroline Quach-Thanh recently told CBC News that updated guidance on the use of the vaccine in older populations will be forthcoming in the “next few days.”

The City of Toronto, which recorded 381 new cases on Saturday, up slightly from 371 new cases on Friday, says it has now administered nearly 240,000 vaccine doses.

This coming Wednesday, the city will begin vaccinating seniors born in 1941 or earlier at three of its mass immunization clinics. There is one at the Metro Toronto Convention Centre, a second at the Toronto Congress Centre and a third at the Scarborough Town Centre. 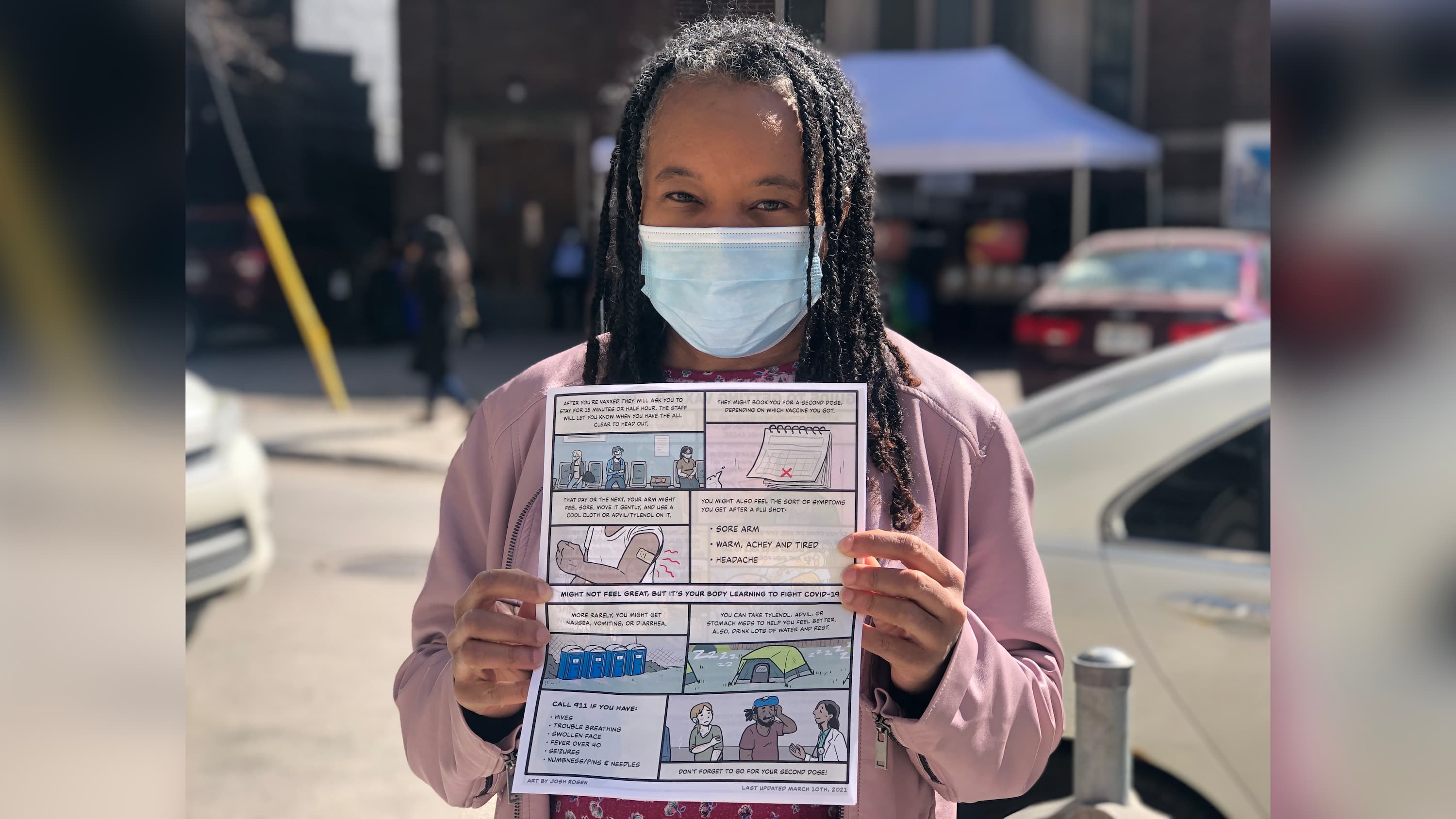 A new project is aiming to tackle vaccine hesitancy among people living with homelessness. Sanctuary Toronto partnered with the United Health Network (UHN) and some local artists to create a series of comics about how the vaccines work and how to get them. As Lorenda Reddekopp reports, the initiative hopes to change some people’s attitudes. 2:07

The city expects to have two more clinics, one at Malvern Community Recreation Centre and the other at Mitchell Field Community Centre, up and running on March 29. The city says it expects to have a third clinic operational at The Hangar on April 5.

Booking opened on Friday for those seniors in the city’s priority group. Approximately 133,000 vaccination appointments between March 17 and April 11 are available for online booking at clinics.

As of Saturday morning, the city says 7,878 people have booked appointments through www.toronto.ca/covid-19/. A spokesperson for the City of Toronto said they expect the number of people confirmed for appointments to grow over the weekend.

To “prevent a rapid shift in trajectory of the pandemic,” Dr. Tam urged Canadians to follow public health guidelines as they have for more than a year now.

She said that means limiting interactions to “the fewest number of people, for the shortest time, at the greatest distance possible, while wearing the best-fitting mask.”

Coronavirus: What's happening in Canada and around the world Sunday – CBC.ca