Young people in Ontario have the highest rates of COVID-19 infection among unvaccinated individuals, the province’s top doctor said Tuesday as he called again for all those eligible to get their shots.

Over the last three months, 96 per cent of people between the ages of 19 and 29 who were infected with COVID-19 weren’t vaccinated against the virus, Dr. Kieran Moore said.

Ninety-nine per cent of infected people between the ages of 12 and 17 were unvaccinated.

“That age group is coming down with a higher rate of disease than other age groups across Ontario,” Moore said.

“They’re a key metric, because they’re the ones that are going to be going to high schools, to colleges, to universities, to workplaces, and potentially, unbeknownst to them, if they’re carrying the virus without symptoms, spreading it in those environments.”

He added that young Ontarians will be a “key target” in the vaccination campaign going forward.

“We’ve been on calls with the local public health agencies and immunization partners around the province who are seeing this lack of uptake in the younger age groups and are looking at ways to encourage them to step forward,” he said.

The data on infections among unvaccinated people was presented one week after Moore commented on the relative lag in immunizations among younger Ontarians.

Overall, the province’s vaccine coverage is relatively high, with 79 per cent of adults vaccinated with at least one dose and 57 per cent fully immunized against COVID-19.

The progress of the vaccination campaign has set the province up to move ahead this week with rolling back more public health restrictions on businesses, gatherings and other activities even further.

The number of vaccinated teens is particularly important as the province prepares for the return to school in September. The province has said it will offer two vaccine doses to all eligible students and staff before classes resume, and vaccines aren’t fully effective until 14 days after the second dose.

Moore said he anticipates a rise in infections in the fall as people move activities indoors. With the highly transmissible Delta variant now dominant in the province, he said high vaccination coverage will be crucial to keeping infections low.

“The Delta strain will seek out unvaccinated individuals and so becoming immunized as soon as possible will ensure that you are not on that path of least resistance for the virus,” he said.

Ontario reported 146 new COVID-19 cases on Tuesday and seven deaths from the virus.

The two Ontario public health units that reported the highest new case counts on Tuesday “continue to struggle” with the Delta variant, said the province’s associated medical officer of health.

But Dr. Barbara Yaffe noted that Grey Bruce and Waterloo Region have shown “what can be achieved” in the fight against that variant by getting vaccinated and following public health orders.

“The people in both regions have made a remarkable effort to protect and care for each other by getting vaccinated and as a result, both regions are seeing their case rates drop,” Yaffe said.

Waterloo Region, which had delayed its reopening due to a surge in Delta variant cases, said Tuesday it would lift restrictions along with the rest of the province this week.

The changes taking effect at 12:01 a.m. on Friday will allow indoor dining and gyms to reopen, as well as expand crowd limits on social gatherings and other events.

Waterloo delayed entering the second step of the reopening plan, but the top doctor for the region said Tuesday that public health indicators have stabilized and vaccination rates have increased rapidly.

This report by The Canadian Press was first published July 13, 2021. 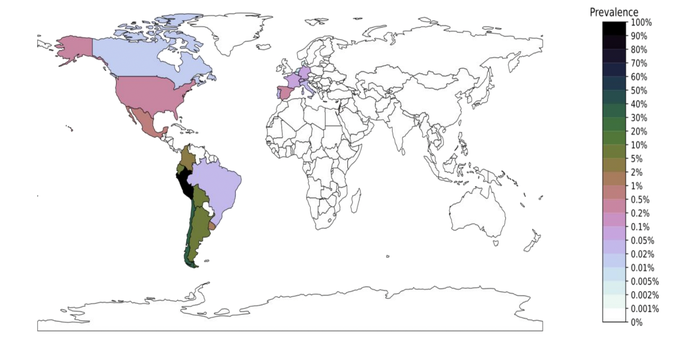 The coronavirus has mutated into several different variants, some more concerning than others.

Lambda is the latest coronavirus variant to garner attention. It was first identified in Peru last year, and has since spread to other countries in South America and around the world.

The World Health Organization declared Lambda a “variant of interest” on June 15, in part due to its unusual and potentially dangerous mutations. That means it’s suspected to be extra infectious or dangerous. (The Delta variant also started at that level, before being promoted to a “variant of concern.”)

The Lambda variant vs. antibodies

Three mutations in the spike protein of the virus may make the Lambda variant able to resist vaccine-induced antibodies, according to lab studies summarized in a recent preprint paper by Japanese researchers that has not yet been peer-reviewed.

In the paper, the researchers wrote that the Lambda variant could be a threat to human society. “Because the Lambda variant is relatively resistant to the vaccine-induced antisera (blood serum containing antibodies against specific antigens), it might be possible that this variant is feasible to cause breakthrough infection,” the authors wrote.

Two additional mutations make the variant highly infectious, according to the study.

However, Dr. Ricardo Soto Rifo, a researcher at the University of Chile, Santiago who is studying the Lambda variant, told the BBC’s Health Check podcast it is something to monitor, but not yet panic about.

Lambda is not uniformly dominating

“So we cannot say what’s going to happen in other countries,” Soto Rifo said.

As of August 4, there had been at least 1,053 instances of Lambda infection in the US, 12 of which were recorded within the past four weeks. However, the Lambda variant is not yet listed alongside other “notable” variants, such as Delta, on the US Centers for Disease Control and Prevention website.

Soto Rifo said South American countries need funding and resources to sequence and track variants. If Lambda is indeed highly transmissible, it could drive a spike in cases, as has been seen with the Delta variant that’s spreading worldwide. More cases also means more breakthrough infections.

But there’s not yet any evidence that Lambda will surpass Delta, the most transmissible variant to date.

“I don’t think there’s any more reason to be concerned than before we knew about this variant,” Nathaniel Landau, a microbiologist at the New York University Grossman School of Medicine, told the New York Times. “There’s no reason to think that this is now something worse than Delta.”

B.C. reports 342 new COVID cases, half of which are in Interior Health – Vernon Morning Star

The province is reporting 342 new cases of COVID-19 Wednesday (Aug. 4), a number not seen since May.

Of the new cases, 66 are in Fraser Health, 57 are in Vancouver Coastal Health, 171 are in Interior Health, 13 are in Northern Health, 32 are in Island Health and three new cases are in people who typically reside outside of Canada.

There are 1,764 active cases, of which 945 are in Interior Health. There are 55 people in hospital, 23 of whom are in intensive care or ICU.

Vaccination rates for people ages 12 and older have reached 81.5 per cent for first doses and 67.9 for second doses. There have been 6,931,815 doses of COVID vaccines administered so far.

B.C. reports 342 new cases of COVID-19 over past 24 hours, with half in Interior Health – Kamloops This Week

After days of reporting elevated case counts near 200 new per day, B.C. reported 342 new cases over the past 24 hours on Wednesday.

After a dramatic decline in cases from April to July, which the provincial government attributed to vaccinations taking hold in the province, cases have once again started spiking upwards, and the Interior Health region is leading the way.

On Wednesday, Interior Health accounted for 171 of the 342 new cases, continuing the trend of making up approximately half of all new cases in the province.

But daily case data from the BC Centre for Disease Control also shows other regions beginning to increase, including Vancouver Coastal Health and Fraser Health.

By the numbers, Fraser Health has 388 active cases, Vancouver Coastal Health has 258, Northern Health has 52, Island Health has 109, 12 are non-residents of Canada and Interior Health has 945.

Hospitalizations and deaths, however, remain low. No deaths were reported on Wednesday and only about a dozen deaths have been reported since the beginning of July.

As of Wednesday, B.C. had 55 people in hospital and 23 of those patients in ICUs.

With vaccinations continuing, B.C. has now put two doses in 67.9 per cent of everyone eligible to receive the vaccine in this province.

The province’s one-dose rate as of Wednesday is 81.5 per cent for everyone age 12 and older.

Look up! The Perseids, one of the year's best meteor showers, peaks next week. – Yahoo News Canada