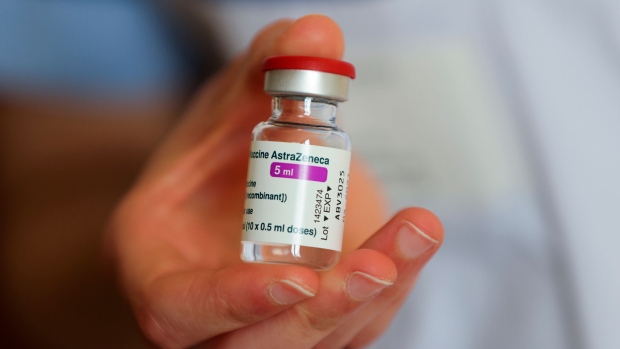 HALIFAX —
The province of Prince Edward Island has suspended use of the AstraZeneca COVID-19 vaccine for people under the age of 55.

Early Monday afternoon, a senior government source confirmed to CTV News that the NACI will recommend pausing administration of the AstraZeneca coronavirus vaccine to those under the age of 55.

In a live COVID-19 update later in the afternoon, P.E.I.’s chief public health officer, Dr. Heather Morrison announced the province would hault AstraZeneca doses for that age group as well.

“The term given to this presentation is called the VIPIT, vaccine induced pro thrombotic immune thrombocytopenia,” said Dr. Morrison. “Serious side effects from vaccines are very rare and VIPIT is a rare presentation occurring anywhere from one in every 125,000 to one in a million people. It’s important to note that no such blood clotting abnormalities or VIPIT have been reported in Canada.”

“This pause will allow the manufacturer to conduct a detailed assessment of the benefits and risk of the vaccine by age and gender in the Canadian context, its information along with further international evidence will be used to determine if additional regulatory actions are necessary,” Morrison added.

P.E.I. Premier Dennis King added assurance to those who have already received the AstraZeneca vaccine on the island.

“For those Islanders who have been vaccinated, to date using AstraZeneca, 1680 of them. I understand this news would be a little bit disturbing to hear this,” said King. “But, I do want to reiterate and Dr. Morrison will further reiterate that the risk of developing a serious problem after being immunized is very very low. To date there have been no reported cases of any of these issues in P.E.I., or Canada.”

King says all islanders will still be able to receive at least one dose of COVID-19 vaccine by the end of June.

The new federal recommendation is expected to be made official later Monday.

Several provinces have already announced plans in line with this expected recommendation, P.E.I. being the first.

Manitoba and Quebec announced later in the day that they were halting vaccinations using AstraZeneca doses for anyone under the age of 55.

Earlier Monday, P.E.I. spokesperson Samantha Hughes sent the following information to CTV News in an email, indicating they would hault AstraZeneca shots for those 18-29:

“Appointments at pharmacies for AstraZeneca vaccine for those 18-29 are on hold pending anticipated further information from Health Canada and NACI. We expect more information on this later today.”

Last Tuesday, Health Canada said the AstraZeneca COVID-19 vaccine is safe and will continue to be recommended for use despite criticism from U.S. health officials of the drugmaker’s analysis of the shot’s efficacy, health officials said.

“The message is that the efficacy and the safety of the vaccine have been shown,” senior Health Canada official Marc Berthiaume told reporters on March 23. “It continues to be beneficial for Canadians to prevent COVID-19.”

Also on Tuesday, Dr. Heather Morrison, P.E.I.’s chief medical officer said most of the 2,000 doses of the AstraZeneca vaccine received on the island had been administered to people 18-29 working in the service industry, and reaffirmed Health Canada’s stance on the Astrazeneca vaccine, saying it is safe and effective, and encouraging any islanders who are offered it, to take it.

“I ask employers and business owners in these areas to encourage their staff age 18-29 to be immunized,” said Morrison on March 23. “And, if possible, please offer to assist with transportation and eliminating any other barriers that may be preventing staff from being vaccinated.”

This is a developing story. It will be updated throughout the day.

Energy Prices are expected to inch up in 2022 after surging more than 80% in 2021, fueling significant near-term risks to global inflation in many developing countries, the World Bank said in its latest Commodity Markets Outlook on Thursday.

The multilateral development bank said energy prices should start to decline in the second half of 2022 as supply constraints ease, with non-energy prices such as agriculture and metals also expected to ease after strong gains in 2021.

“The surge in energy prices poses significant near-term risks to global inflation and, if sustained, could also weigh on growth in energy-importing countries,” said Ayhan Kose, chief economist and director of the World Bank’s Prospects Group, which produces the Outlook report.

“The sharp rebound in commodity prices is turning out to be more pronounced than previously projected. Recent volatility in prices may complicate policy choices as countries recover from last year’s global recession.”

The International Monetary Fund, in a separate blog https://blogs.imf.org/2021/10/21/surging-energy-prices-may-not-ease-until-next-year, said it expected energy prices to revert to “more normal levels” early next year when heating demand ebbs and supplies adjust. But it warned that uncertainty remained high and small demand shocks could trigger fresh price spikes.

The World Bank noted that some commodity prices rose to or exceeded levels in 2021 not seen since a spike a decade earlier.

Natural gas and coal prices, for instance, reached record highs amid supply constraints and rebounding demand for electricity, although they are expected to decline in 2022 as demand eases and supply improves, the bank said.

It warned that further price spikes could occur in the near-term given current low inventories and persistent supply bottlenecks. Other risk factors included extreme weather events, the uneven COVID-19 recovery and the threat of more outbreaks, along with supply-chain disruptions and environmental policies.

The use of crude oil as a substitute for natural gas presented a major upside risk to the demand outlook, although higher energy prices may start to weigh on global growth.

The bank forecast a 5% drop in metals prices in 2022 after a 48% increase in 2021. It said agricultural prices were expected to decline modestly next year after jumping 22% this year.

It warned that changing weather patterns due to climate change also posed a growing risk to energy markets, potentially affecting both demand and supply.

It said countries could benefit by accelerating installation of renewable energy sources and by cutting their dependency on fossil fuels.