WINNIPEG —
A group of Winnipeggers who believed they had been given a Moderna COVID-19 vaccine are now finding out they might have been immunized with an AstraZeneca dose by mistake.

For her first shot, Terry Rogowsky had received a Pfizer dose but opted to get a Moderna dose for her second shot due to the limited number of Pfizer doses available.

That is what brought Rogowsky, her husband, her son and a few of her co-workers to the pop-up clinic at the Weston Memorial Community Centre run by NorWest Co-op Community Health on June 24 – to roll up their sleeves and get a shot of what they were told was the Moderna vaccine.

A day after receiving their vaccines, however, Rogowsky said her husband, her son and two of her co-workers got a letter from NorWest.

The letter said of the 95 doses of vaccine that were available at the clinic, 11 mistakenly contained the AstraZeneca vaccine instead of Moderna. The letter went on to say the clinic is not able to confirm if they had been immunized with AstraZeneca or Moderna.

“We are sorry for any worry you might feel when hearing this news. We apologize for this error and have taken appropriate steps to ensure this will not occur again,” the letter reads.

The letter goes on to say if those who received the letter experience any “rare but serious signs or symptoms” within 42 days, they should go to the nearest emergency department or health centre for immediate assessment.

A provincial spokesperson confirmed the slip-up.

“Our clinical team was notified by NorWest immediately after NorWest realized the error. The clinical team reviewed the safety and effectiveness implications of the situation,” a spokesperson for the province told CTV News in a statement.

“While a very rare occurrence, there have been previous instances where a person received a vaccine which was not (what) they had anticipated.”

Kristin Bergen, the director of primary care for NorWest, told CTV News a small amount of AstraZeneca doses had been administered at the pop-up. Upon realizing the mistake, Bergen said Norwest contacted the provincial vaccine clinical team, and wrote letters to the patients explaining the error.

“We apologized for any worry this may have caused them hearing this news and have taken appropriate steps to ensure this will not occur again,” she said in an email to CTV News.

“It’s important to note that the outcome for the client remains the same – protection against COVID-19. All vaccines administered in Manitoba/Canada have been approved by Health Canada.”

Still the mistake has left Rogowsky and her family frustrated and concerned.

“I’m watching my son and my husband like a hawk, making sure nobody’s feeling any odd symptoms. I’m panicked for them,” Rogowsky told CTV News.

“My husband now doesn’t know what he should be getting for his second dosage, because he doesn’t actually know what he got for his first dosage.”

The letter from NorWest recommended her husband receive a mRNA vaccine (Pfizer or Moderna) for his second dose.

Despite the letter, Rogowsky said she has more questions and not many answers.

“I need to know that this isn’t going to happen to anybody else. I don’t want anybody to be afraid to get the vaccine,” she said.

“You shouldn’t have that fear that you may be getting the wrong vaccine. That’s not right.” 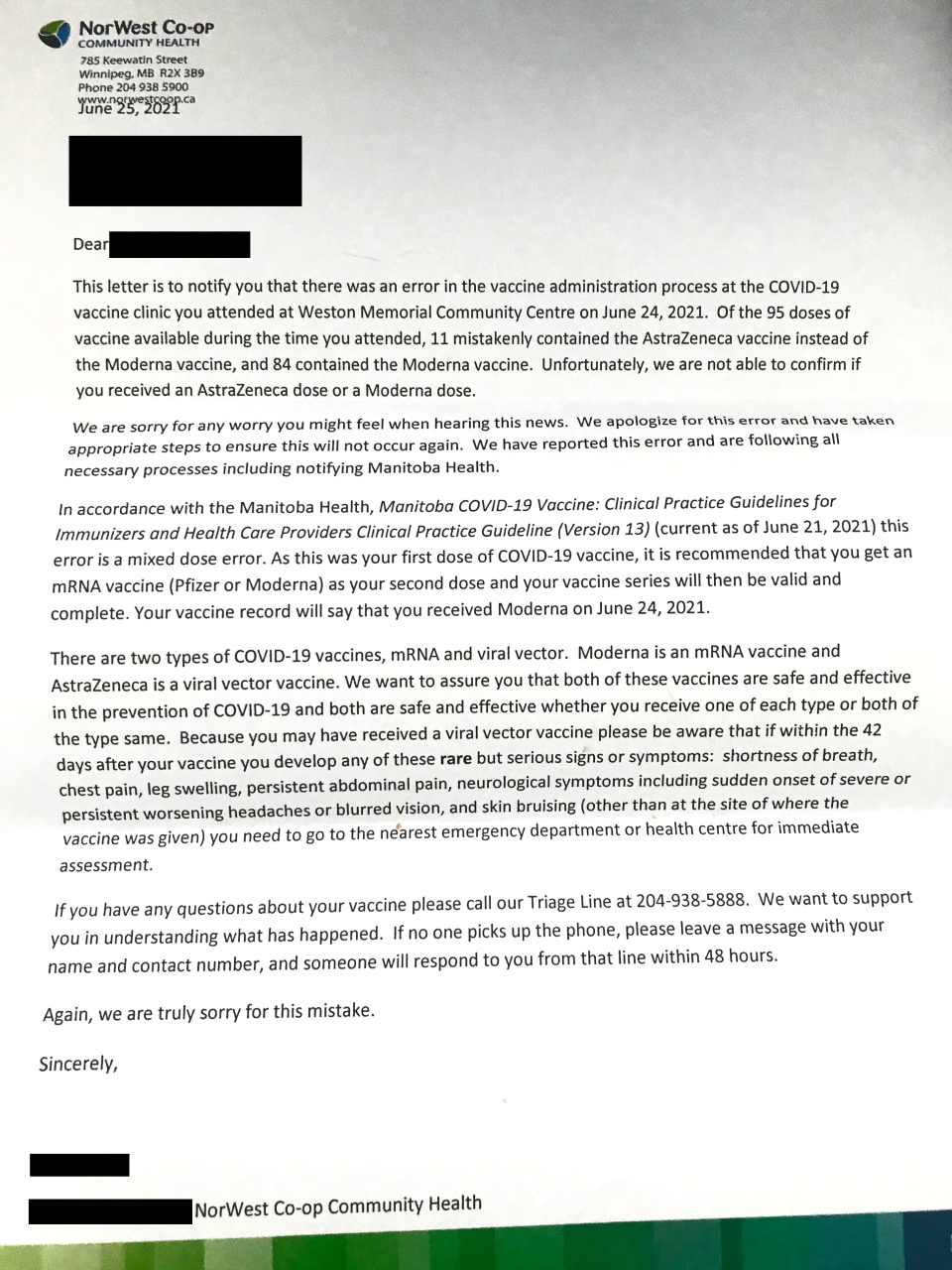 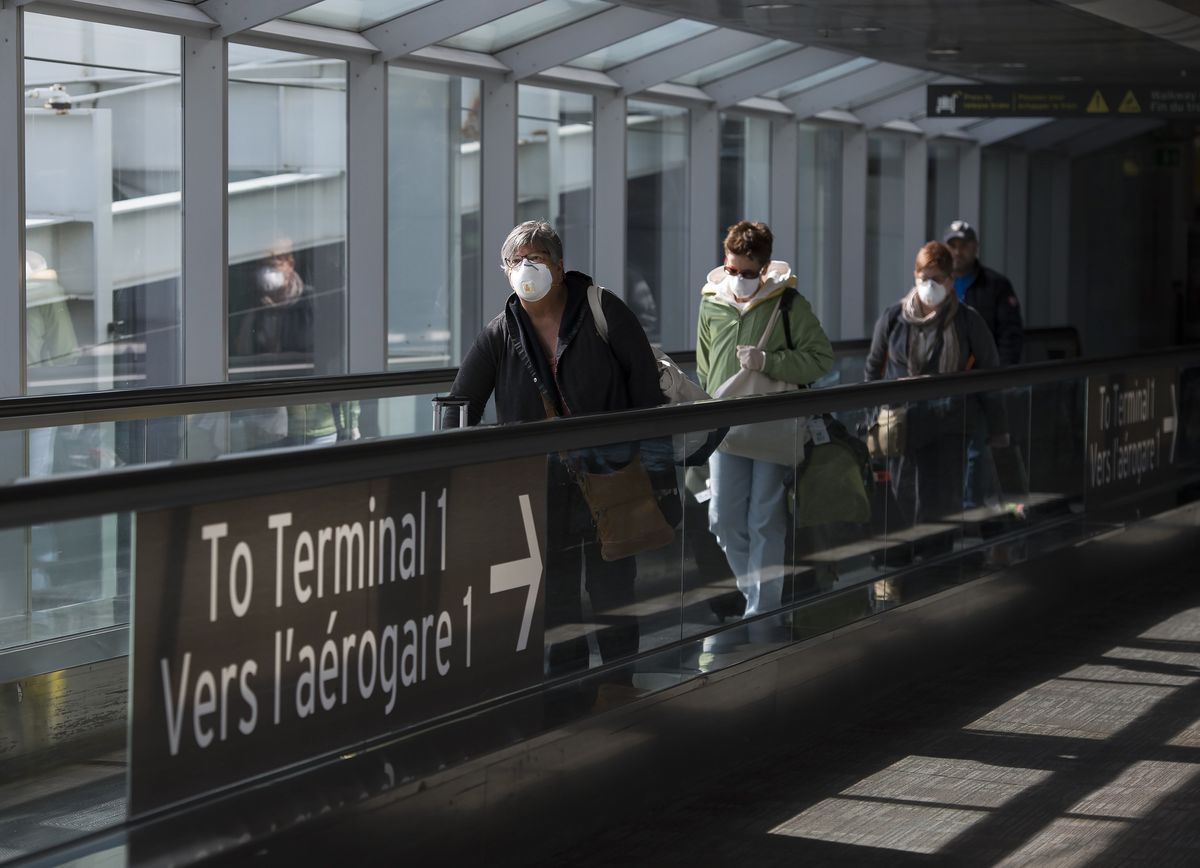 International travellers arriving at Canada’s largest airport may now be funnelled into different customs lines based on their vaccination status.

Toronto’s Pearson International Airport says it may be splitting passengers coming from the U.S. or other international destinations into vaccinated and partially or non-vaccinated queues.

A spokeswoman for the Greater Toronto Airports Authority says it’s a measure to help streamline the border clearance process since there are different requirements for both sets of travellers.

The Vancouver International Airport has instituted a similar policy.

As of Aug. 9, fully vaccinated U.S. citizens and permanent residents will be allowed into Canada, followed by the rest of the world on Sept 7.

There were 132 patients in intensive care with critical COVID-related illness and 86 on ventilators.

More than 124,000 doses of vaccines were administered in the previous day, for a total of more than 18.8 million. 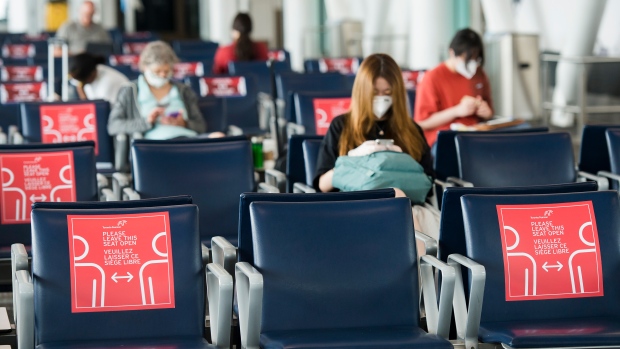 International passengers arriving at Toronto Pearson Airport will now be separated by vaccination status before heading through customs, the airport confirmed Saturday.

“Passengers entering Canada from the U.S. or another international destination may be split into vaccinated and non/partially-vaccinated queues prior to reaching Canada Customs,” Beverly MacDonald, Senior Advisor of Communications at Toronto Pearson told CTV News Toronto Saturday,

The airport said the decision was made to help streamline border clearance, as there are different entry requirements for vaccinated and non- or partially-vaccinated travellers.

Come Aug. 9, fully vaccinated U.S. citizens will be exempt from quarantine and testing requirements, much like their Canadian counterparts.

“We know that the arrivals experience is different for passengers than it was in pre-pandemic times, and we appreciate passengers’ patience,” MacDonald said.

However, the Ontario COVID-19 Science Advisory Table issued a 21-page briefing on the potential of a provincial vaccine certification program Wednesday, claiming that one “could be useful in reopening higher-risk settings … sooner.”

OTTAWA —
The number of active COVID-19 cases in Ottawa is back above 40 for the first time in two weeks, as the city’s vaccine administration pace slows down.

There are still no COVID-19 patients in hospital in the city, which has been the case for nine days now.

The city administered an average of about 5,500 second shots on Wednesday and Thursday, down from more than 13,000 second doses per day last week.

Eighty-three per cent of eligible residents have received at least one shot. Sixty-nine per cent are now fully vaccinated.

Earlier this week, the city closed several vaccination clinics due to decreasing demand.

There are 41 active cases of COVID-19 in Ottawa on Friday, up from 24 on Wednesday. It’s the most active cases in the city in nearly two weeks.

For the second straight day, no more people have recovered after testing positive for COVID-19. The total number of resolved cases of coronavirus in Ottawa is 27,134.

There are no patients in the intensive care unit.

*Total doses received does not include doses shipped to pharmacies and primary care clinics, but statistics on Ottawa residents with one or two doses includes anyone with an Ottawa postal code who was vaccinated anywhere in Ontario.