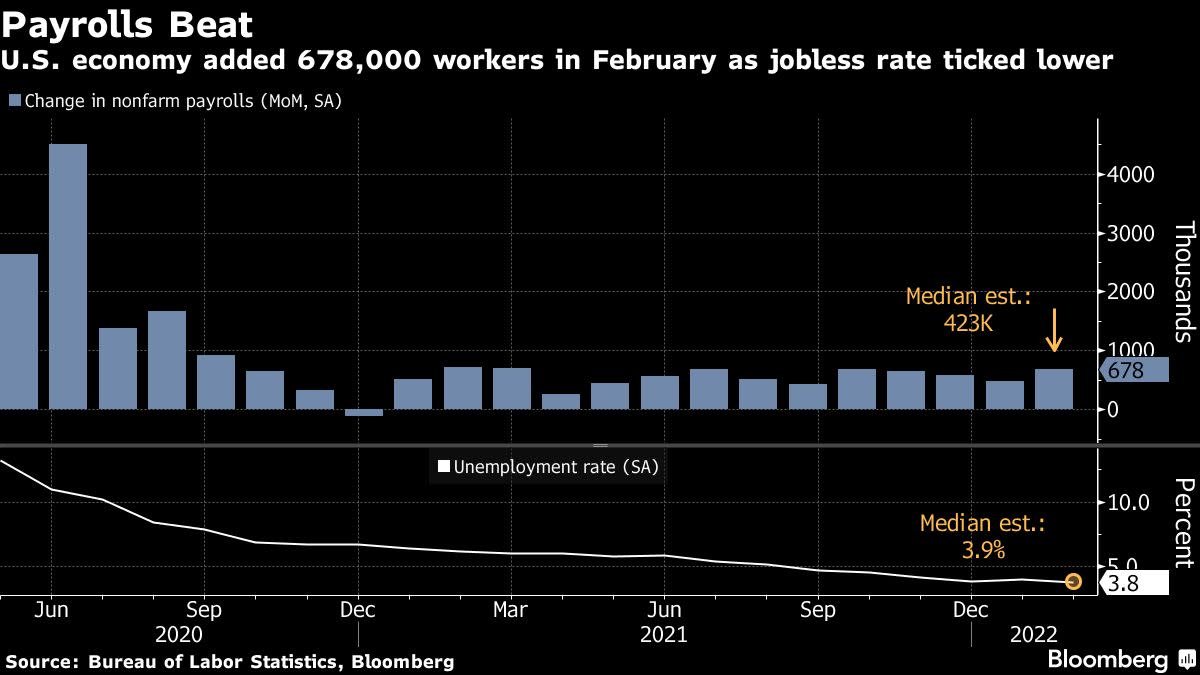 The Federal Reserve kicked off a tightening campaign that’s set to be the most aggressive in decades, as Chair Jerome Powell assured Americans that the economy won’t tip into recession.

After raising interest rates by a quarter point and signaling six more increases this year, Powell told reporters that inflation is too high, the labor market is over-heated and price stability is a “pre-condition” for the U.S central bank as it tackles the hottest price pressures in 40 years.

“As I looked around the table at today’s meeting, I saw a committee that’s acutely aware of the need to return the economy to price stability and determined to use our tools to do exactly that,” Powell told reporters Wednesday following a two-day meeting of the Federal Open Market Committee. “The American economy is very strong and well positioned to handle tighter monetary policy.”

Policy makers voted 8-1 to lift their key rate to a target range of 0.25% to 0.5% after two years of holding borrowing costs near zero to insulate the economy from the pandemic. They forecast a sequence of rate hikes, finishing this year at 1.9% and then to about 2.8% by the end of 2023, which would be considered restrictive to growth.

Seven policy makers want an even faster pace of increases this year, which raises the prospect of a half-point move in future. Indeed, St. Louis Fed President James Bullard dissented at this meeting in favor of such an step.

“The Fed has now waged a war on inflation,” said Diane Swonk, chief economist at Grant Thornton. “They want to bring inflation down with the most aggressive surge in rates in decades.”

The Fed said that Russia’s invasion of Ukraine had had “highly uncertain” implications for the U.S. economy that create near-term upward pressure on inflation while weighing on economic activity.

U.S. central bankers face the arduous task of securing a soft landing for the world’s largest economy, a very rare outcome. Tighten too slowly and it risks allowing inflation to run out of control, requiring even tougher action. Shift too quickly and the central bank could roil markets and tip the economy into recession. Complicating the job: The war has sent the cost of fuel, food and metals racing even higher, raising fears of 1970s-style stagflation by posing threats to prices, growth and financial-market stability.

“FOMC participants have backed up Chair Powell’s hawkish words. They are serious about controlling inflation, and are willing to hike rates faster and higher than previously expected.”

Still, Powell played down the risk of recession and repeatedly stressed that the U.S. economy is “very strong” while emphasizing the need for price stability.

“They saw the light,” said Stephen Stanley, chief economist at Amherst Pierpont Securities LLC. “They have been underestimating the persistence and intensity of inflation pressures for at least a year. They have finally realized they have a serious problem on their hands and have to act. There is a whatever-it-takes kind of mentality” now.

The U.S. economy roared into the first quarter with employers adding more than 1 million jobs in the first two months and job openings near a record high. Strong demand sustained price increases and consumer inflation rose by 7.9% for the 12 months through February. The Fed’s 2% inflation target is based on a separate gauge, the personal consumption expenditures price index, which rose 6.1% in January.

Powell and his colleagues have pivoted rapidly from the gradualism of just three quarter-point hikes they penciled in for 2022 when they met in December to seven now, including Wednesday’s increase. The aggressive swerve is punctuated the risk of losing a grip on price increases now, which would require higher costs to the economy later to get it back under control.

For more than two decades, Fed officials have locked down inflation to around 2%, cementing public expectations that price volatility was no longer an issue for economic decisions. Achieving that required a punishing recession engineered by former Chairman Paul Volcker who pushed borrowing costs into the double digits. This year, Fed officials forecast that pandemic supply-chain problems would subside, and they still do, but Wednesday’s statement noted that price pressures are spreading beyond the logistics knots at a time of wage increases.

Now they are betting that a policy tilt toward a series of steady increases will keep inflation expectations anchored. But the risk is that the war in Ukraine, which has sent energy and commodity costs soaring, delivers another impetus to price pressures even while the U.S. jobs market remains too tight.

Powell was clear that if inflation doesn’t calm down, the policy committee will hammer it even harder.

Notwithstanding the projected rate increases, the Fed’s forecasts show very little increase in unemployment, which stays around 3.5% for the next three years. Economists said that sort of happy outcome rarely happens in real life.

“The history of being able to guide inflation down from 40-year highs with maximum employment suggests a smooth landing is very difficult to achieve,” said Matthew Luzzetti, chief U.S. economist at Deutsche Bank Securities Inc. “At some point they will face the tradeoff between pushing unemployment higher or accepting higher inflation.”

Despite the rosy outlook for the labor market in the forecasts, Powell made clear that it is running too hot in his view.

“There is misalignment of demand and supply, particularly in the labor market, and that is leading to wages that are moving up that are not consistent with 2% inflation over time,” Powell said. He said job openings near record highs point to a labor market that is “tight to an unhealthy level.”

“That is a pretty extreme thing to say,” said Derek Tang, an economist at LH Meyer/Monetary Policy Analytics. “That is saying too many people have jobs and people are getting wages that are too frequent. He is really putting his thumb down on the scale now.”