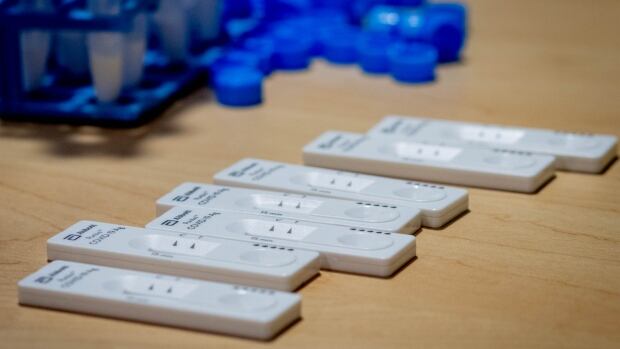 The Ontario government has announced a single Ottawa pop-up location where people can pick up a free COVID-19 rapid antigen test or take a test on site over a four-day period this week.

Rapid antigen test kits have become a hot commodity in recent weeks as people seek to screen themselves and their family members ahead of holiday gatherings — which are limited to 10 people indoors.

Unlike the gold standard PCR tests which are offered through assessment centres, hospitals and other health-care settings and have to be sent to a lab for analysis, rapid antigen tests offer a quick way to detect a potential infection.

Rapid tests — similar to at-home pregnancy tests — are a do-it-yourself version that shows results in around 15 minutes.

Earlier this week, the province announced a “holiday testing blitz” in which it plans to give out nearly two million rapid tests from now to mid-January at malls, city centres and LCBOs.

Just over 200,000 rapid test kits — each containing five tests, and therefore totalling just over one million tests — were quickly gobbled up by visitors at participating LCBOs on Friday.

More tests are expected to be dispersed over the coming days, including at 10 sites in Ottawa.

While the full list of Ottawa locations has yet to be confirmed, the province’s holiday testing page was updated Saturday to include the Minto Recreation Complex at 3500 Cambrian Rd., in Ottawa’s west end.

Tests will be offered at the centre starting at 7 a.m. between Tuesday and Friday.

It remains unclear how many of those 10 million tests will go to the holiday blitz meant for the general public versus prioritized settings such as schools, vulnerable workplaces and health-care settings.

In an email to CBC on Saturday, a spokesperson for the Ministry of Health said the government recognizes there is significant demand for rapid tests.

“That said, Ontario has a limited supply of rapid tests and every single test the province has received from the federal government is out the door to thousands of workplaces, hospitals, home and community care settings, long-term care homes, schools and child-care centres on top of the many pop-up sites across the province,” the spokesperson wrote.


The chairman of global banking giant Credit Suisse, Antonio Horta-Osorio, has resigned with immediate effect after an internal company probe.

He was reportedly found to have broken the UK’s Covid-19 quarantine rules.

The former boss of Lloyds Banking Group joined Credit Suisse after a series of scandals at the Swiss bank.

Now, Mr Horta-Osorio, who was the chairman of Credit Suisse for less than a year, has been replaced by board member Axel Lehmann.

“I regret that a number of my personal actions have led to difficulties for the bank and compromised my ability to represent the bank internally and externally,” Horta-Osorio said in a statement issued by the bank.

“I therefore believe that my resignation is in the interest of the bank and its stakeholders at this crucial time,” he added.

Last month, it was reported by the Reuters news agency that a preliminary investigation by Credit Suisse had found that Mr Horta-Osorio had breached Covid-19 rules.

He reportedly attended the Wimbledon tennis finals in July at a time when the UK’s Covid-19 rules required him to be in quarantine.

Speaking to the BBC, a spokesperson for Credit Suisse said that the bank would give no further details on Mr Horta-Osorio’s resignation other than those in its statement.

They also said that there were no plans to release the findings of the investigation.

He was brought in to lead Switzerland’s second-largest bank to help clean up a corporate culture marred by its involvement with collapsed investment company Archegos and insolvent supply chain finance firm Greensill Capital.

In February 2020, then-Credit Suisse chief executive Tidjane Thiam resigned after a scandal revealed the bank had spied on senior employees.