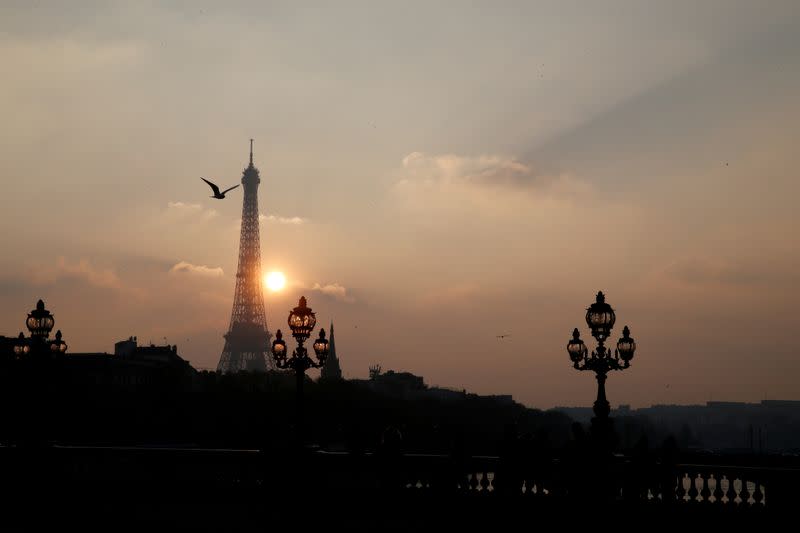 By Leigh Thomas and Howard Schneider

PARIS/WASHINGTON (Reuters) – Real-time data on everything from sit-down restaurant meals to job hirings shows American business and consumers leaping to take advantage of a fast vaccine rollout even as their European counterparts languish in extended lockdowns.

And while some U.S. health experts express concern at the loosening or outright dropping of COVID-19 restrictions by many states, the outcome for now is that it is widening the U.S. head start in the post-pandemic recovery.

Even after an uptick this month for the first time since January, new U.S. infections at 131 per 100,000 over seven days are lower than those in Germany, France and Italy, the top three euro economies, the Reuters COVID-19 Global Tracker shows.

Coupled with a faster vaccine rollout than any in Europe aside from Britain’s, that has prompted a tangible return of activity across a U.S. economy already forecast by the International Monetary Fund to return to pre-pandemic health months before the euro area can.

Take restaurants and retail. Diner visits recorded on the OpenTable State of the Industry site show, unsurprisingly, that numbers have continued to flat-line in Germany since late 2020 when lockdown measures were introduced.

While many European countries still have stringent travel restrictions in place – and some are considering additional ones – the number of U.S. air passengers screened topped 1.5 million this month for the first time in a year.

With some states open for leisure travel despite federal guidance to the contrary, U.S. airline executives see concrete signs of a domestic leisure travel recovery and are optimistic about the summer season.

The buoyant mood is reflected in job postings recorded on the Indeed website, with the U.S. tally having now since January pushed strongly past its February 2020 level while those in France and Germany remain below it.

Such snapshots of economic behaviour must be interpreted carefully. OECD economist Nicolas Woloszko noted for example that drops in mobility over the past two to three months were having smaller effects on activity as firms and households adapted to the new conditions.

Yet the overall picture, combined with faster U.S. vaccine rollout and new Biden administration stimulus of $1.9 trillion, is already enough for many forecasters to start pencilling in a widening of the growth gap between the United States and the euro zone in the first three months of this year. (Graphic: U.S. bank deposits have soared on stimulus payments, https://graphics.reuters.com/EUROZONE-USA/DIVERGENCE/xlbpgxxwrvq/chart.png)

Already, the Federal Reserve’s projection of a 6.5% growth rate for the United States in 2021 compares with a mere 3.7% forecast for the European economy.

Worse, economists such as Gilles Moec at AXA Group see the euro area battling with further restrictions in the second quarter too until vaccine campaigns start to accelerate and cap new infections as promised by European Union officials.

“What is in balance is the fate of the third quarter, since at the current pace of vaccination reaching collective immunity by the summer definitely is a challenge,” Moec noted.