“Canadians are very sensitive about the commercialization of this sacred holiday,” independent retail analyst and consultant Bruce Wintertold CTVNews.ca in a phone interview. “Certainly in Canada it’s been taboo to have any type of sale on Remembrance Day, for the obvious reason that we’re remembering our fallen soldiers.”

Lenovo’s Canadian-facing site says that “Our biggest Remembrance Day sale ever is coming in 2020,” and asks customers to sign up. Lenovo’s head office is in Beijing, and its operational headquarters is in North Carolina. 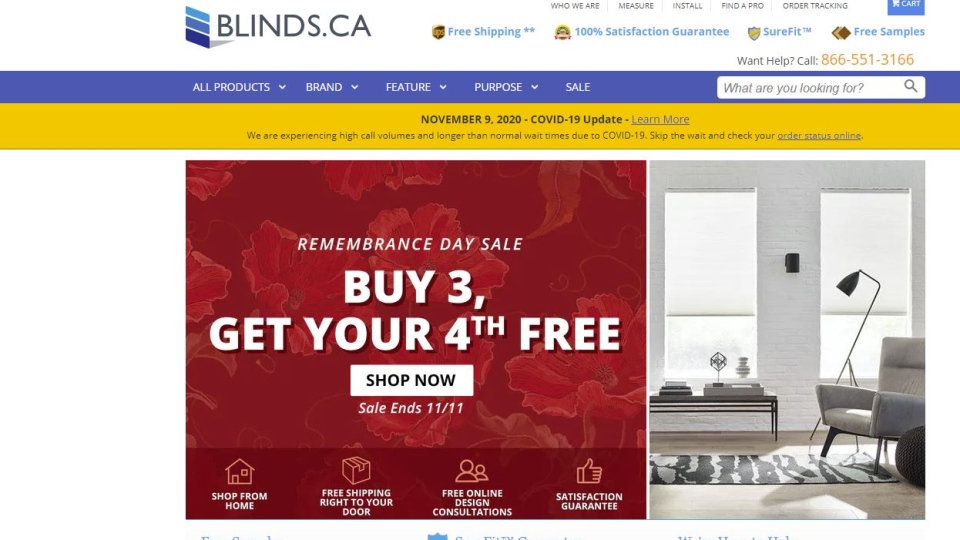 Customers of window blind retailer blinds.ca could get a fourth window blind free if they buy three under that company’s Remembrance Day sale, which was originally supposed to end Nov. 11.

“At Blinds.ca we have the utmost respect for military veterans, their families and their sacrifices,” wrote spokesperson Kathleen Hartnett, who is based in Houston. “We apologize to our Canadian shoppers for any disrespect that this has caused and we have removed the sale from our site.”

Lenovo did not respond to a request for comment.

Remembrance Day sales have been controversial in the past. Veterans and their organizations condemned similar sales by Eddie Bauer in 2010, and The Gap in 2014.

“While we are supportive of retailers who wish to show their thanks to our veterans, we would not want to see the actual commercialization of Remembrance Day, or of the remembrance period itself,” Royal Canadian Legion spokesperson Nujma Bond said in a written statement.

Winter, and Ryerson University historian Peter Vronsky, point out that Veterans Day sales are common in the U.S. around Nov. 11, and say that companies seem to have carried the concept into Canada without paying enough attention to cultural difference.

“In the United States traditionally, Memorial Day and Veterans Day are holidays in a strange way,” he says. “That’s their cultural tradition, But Remembrance Day was never really a holiday in that sense of the word here. This was a solemn memorial, a dark day. The Americans have a different approach.

“I think there’s a much more solemn sense of what Remembrance Day stands for – it’s not about going shopping, certainly.”

Winter says it’s an example of marketing practices being simply transferred from one country to another without enough attention to cultural difference, something he calls “a rookie mistake.”

“Sometimes companies just don’t do the due diligence,” he says, pointing out that “Canadians are very sensitive about the commercialization of this sacred holiday.”

“There are a number of companies that think that the way they market in their home country, they can use the exact same practices around the world. That’s something you learn the hard way, that you can’t do that – you have to be local. You have to think about local tastes and local holidays and local consumer sentiment and behaviour.”

Retail analyst Craig Patterson calls the sales “a big marketing fail” that would have been prevented by basic research that would have quickly shown previous years’ controversies.

“I would just shake my head and say: ‘You guys just need to do your research. Do your job. It’s not that hard to do a little bit of backgrounding. You’re operating in another country – you need to understand the cultural norms of that country.’ I don’t know that there are that many excuses.”

Bilquis Abdul-Qaadir, the trailblazing basketball player who set up an academy for girls and coached multiple sports at an Islamic school in London, Ont., has been denied permanent residency in Canada and will have to go back to the United States.

“We’ve been here for two years, my son is Canadian, and we would love to be part of this country, but we finally got the message from immigration that we were denied permanent residency. It’s very unexpected,” said Abdul Qaadir from her London home. “I’m at a loss for words. I’ve single-handedly brought sports to an underserviced community. It’s heartbreaking.”

Abdul-Qaadir and her husband, A.W. Massey, moved to London from Tennessee three years ago.

She said she hasn’t been able to work in Canada since August, when her work permit expired and wasn’t renewed by a Canadian border official.

“We’re still trying to figure out what we’re going to do. We aren’t sure. We’re angry and we’re tired. We put our heart and soul into this application. We felt like we checked all the boxes.”

Abdul-Qaadir led a four-year battle against the International Basketball Federation, which banned religious head coverings on the court. She won, but sacrificed her basketball career to do so.

She had been the leading high school point scorer for both boys and girls in Massachusetts, and went on to play for the University of Memphis in Tennessee, where she was the first woman to play in a hijab in NCAA Division 1.

Alongside her motivational speaking gigs, she teaches at the London Islamic School and has opened a basketball academy in London, but all that is now up in the air.

After waiting an entire year, my Canadian permanent residency application was refused because the <a href=”https://twitter.com/CitImmCanada?ref_src=twsrc%5Etfw”>@CitImmCanada</a>’s officer felt that my job duties as Athletic Director at the Mosque/Private School in London ON, wasn’t adequate work.

On Thursday, Abdul-Qaadir got a letter from Immigration, Refugees and Citizenship Canada (IRCC) that said she doesn’t “meet the requirements for immigration to Canada.”

She applied for permanent residency as an athletic director at the London Muslim Mosque, but her duties — including developing, managing and supervising the school’s physical education and athletic programs, as well as being the head coach for the basketball, volleyball and cross-country teams — are “inconsistent with the actions” of an athletic director.

“I am not satisfied that your stated duties is sufficient to indicate that your role involves plan, organize, direct, control and evaluate the operations of comprehensive fitness programs at this organization. I am also not satisfied that you performed a substantial number of the main duties for this [job classification],” IRCC wrote in her letter.

Abdul-Qaadir said she doesn’t know if she and her husband will fight the refusal.

Mastercard Inc said on Monday it would allow partners on its network to enable their consumers to buy, sell and hold cryptocurrency using a digital wallet, as well as reward them with digital currencies under loyalty programs.

The credit card giant said it would offer these services in partnership with Bakkt Holdings Inc, the digital assets platform founded by NYSE-owner Intercontinental Exchange.

Founded in 2018, Bakkt went public earlier this year through a $2.1 billion merger with a blank-check company. Shares of the company were up 77% at $16.19 on Monday.

Mastercard said its partners can also allow customers earn and spend rewards in cryptocurrency instead of loyalty points.

The company had said in February https://www.reuters.com/article/us-crypto-currency-mastercard-idUSKBN2AA2WF it would begin offering support for some cryptocurrencies on its network this year.

Bitcoin, the world’s largest cryptocurrency, touched a record high of $67,016 last week after the debut of the first U.S. bitcoin futures-based exchange traded fund. It has more than doubled in value this year.

(Reporting by Niket Nishant in Bengaluru; Editing by Ramakrishnan M.)

Meng, the daughter of Huawei’s founder Ren Zhengfei, completed three weeks of quarantine last week after returning to the southern city of Shenzhen where a crowd of well-wishers chanting patriotic slogans awaited her at the airport.

“Over the last three years, although we have struggled, we have overcome obstacles and our team has fought with more and more courage,” she said in a speech at an internal company event that was circulated online.

The extradition drama had been a central source of discord between Beijing and Washington, with Chinese officials signalling that the case had to be dropped to help end a diplomatic stalemate.

Meng was detained in December 2018 in Vancouver after a New York court issued an arrest warrant, saying she tried to cover up attempts by Huawei-linked companies to sell equipment to Iran in breach of U.S. sanctions.

She was allowed to go home after reaching an agreement https://www.reuters.com/technology/huawei-cfo-meng-appear-court-expected-reach-agreement-with-us-source-2021-09-24 with U.S. prosecutors last month to end a bank fraud case against her.