Angel investment reached a new record of $163.9 million in 2019, bringing angel activity to more than $1 billion in Canada over the last decade, according to a new report from the National Angel Capital Organization (NACO).

“To emerge from the economic crisis, Canada needs to activate increased angel capital by an order of magnitude.”
– Claudio Rojas, CEO of NACO

NACO’s 10th annual report spotlights angel investment activity and year-over-year trends to provide insight into the significance of angel investing in Canada’s innovation economy. The report defines angels as community-based investors that are the main source of early-stage capital for Canadian entrepreneurs.

“This report demonstrates the important role that angel investors have had in the development of the innovation ecosystem, marking a new milestone with $1 billion invested in support of Canada’s entrepreneurs,” said Claudio Rojas, CEO of NACO.

The record $163.9 million in funding was tracked across 299 investments in 2019. This is the highest annual amount invested in the last decade, an increase of approximately 15 percent from 2018 figure and exceeding 2017’s previous record. NACO determined that every dollar of angel investment results in $156 in revenue for angel-backed companies. 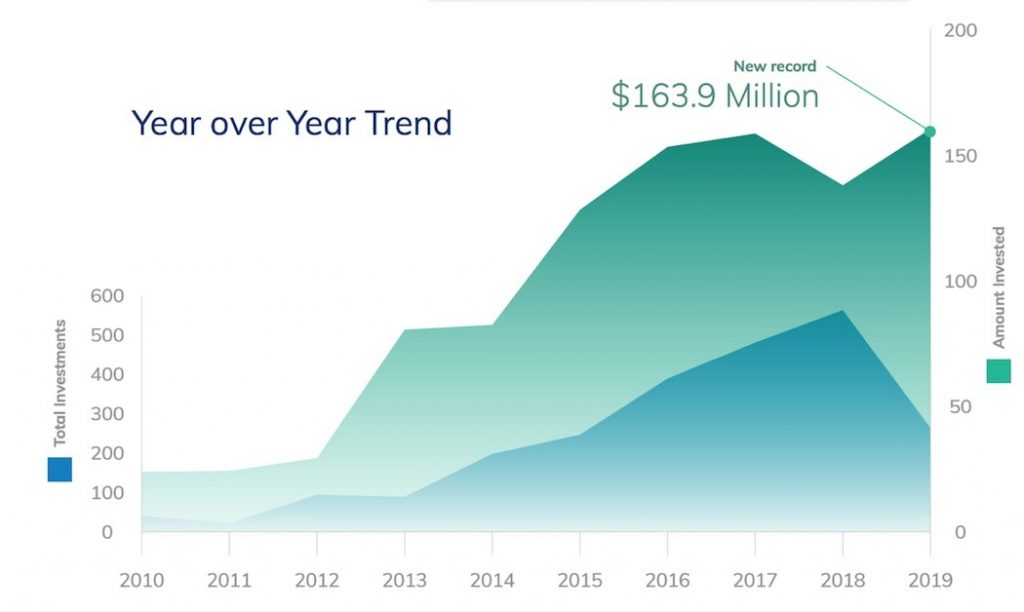 Women represented less than one-fifth of angel group members last year, which NACO noted was “consistent” with 2018’s numbers. This indicates that women participation in angel investing has not improved significantly over the last year.

Angel investment activity is also distributed unevenly across Canada, the report found. Central Canada, including Ontario and Quebec, accounted for 86 percent of investments, compared with 13 percent in Western Canada, and only one percent in Atlantic Canada.

The report noted that last year, angel groups primarily invested in small businesses with one to five or six to 10 employees at the time of the investment, accounting for 42 percent and 18 percent of investments, respectively.

“It was angel investors who believed in our mission and invested half a million dollars in our company and using that, we developed our technology and have moved into pilot trials with multiple companies,” said Julie Angus, CEO and co-founder of Open Ocean Robotics. “We would not have been able to scale our company without this early support and mentorship.”

NACO’s angel activity report made several recommendations to the federal government to support and stimulate angel investing in Canada. The first was to leverage angel investment by creating co-investment initiatives or “matching funds.” The second was to reduce risk by creating tax incentives for angel investors.

The third was to implement securities exemptions to increase the pool of potential angel investors. NACO’s fourth recommendation was to provide more support to the non-profit angel group network to give entrepreneurs centralized and coordinated access to capital and resources.

“To emerge from the economic crisis, Canada needs to activate increased angel capital by an order of magnitude or risk losing a generation of entrepreneurs,” Rojas said.

Why you should factor in your real estate when you make all investment decisions – TheChronicleHerald.ca

Bank of Montreal expects its earnings contribution from the U.S. to keep growing, even without any mergers and acquisitions, driven by a much smaller market share than at home and nearly C$1 trillion ($823.38 billion) of assets, Chief Executive Officer Darryl White said on Monday.

“We do think we have plenty of scale,” and the ability to compete with both banks of similar as well as smaller size, White said at a Morgan Stanley conference, adding that the bank’s U.S. market share is between 1% and 5% based on the business line, versus 10% to 35% in Canada. “And we do it off the scale of our global balance sheet of C$950 billion.”

Shares of GameStop Corp lost more than a quarter of their value on Thursday and other so-called meme stocks also declined in a sell-off that hit a broad range of names favored by retail investors.

The video game retailer’s shares closed down 27.16% at $220.39, their biggest one-day percentage loss in 11 weeks. The drop came a day after GameStop said in a quarterly report that it may sell up to 5 million new shares, sparking concerns of potential dilution for existing shareholders.

“The threat of dilution from the five million-share sale is the dagger in the hearts of GameStop shareholders,” said Jake Dollarhide, chief executive officer of Longbow Asset Management. “The meme trade is not working today, so logic for at least one day has returned.”

Soaring rallies in the shares of GameStop and AMC Entertainment Holdings over the past month have helped reinvigorate the meme stock frenzy that began earlier this year and fueled big moves in a fresh crop of names popular with investors on forums such as Reddit’s WallStreetBets.

Many of those names traded lower on Thursday, with shares of Clover Health Investments Corp down 15.2%, burger chain Wendy’s falling 3.1% and prison operator Geo Group Inc, one of the more recently minted meme stocks, down nearly 20% after surging more than 38% on Wednesday. AMC shares were off more than 13%.

Worries that other companies could leverage recent stock price gains by announcing share sales may be rippling out to the broader meme stock universe, said Jack Ablin, chief investment officer at Cresset Capital.

AMC last week took advantage of a 400% surge in its share price since mid-May to announce a pair of stock offerings.

“It appears that other companies, like GameStop, are hoping to follow AMC’s lead by issuing shares and otherwise profit from the meme stocks run-up,” Ablin said. “Investors are taking a dim view of that strategy.”

Wedbush Securities on Thursday raised its price target on GameStop to $50, from $39. GameStop will likely sell all 5 million new shares but that amount only represents a “modest” dilution of 7%, Wedbush analysts wrote.

GameStop’s shares rallied more than 1,600% in January when a surge of buying forced bearish investors to unwind their bets in a phenomenon known as a short squeeze.

The company on Wednesday said the U.S. Securities and Exchange Commission had requested documents and information related to an investigation into that trading.

In the past two weeks, the so-called “meme stocks” have received $1.27 billion of retail inflows, Vanda Research said on Wednesday, matching their January peak.

U.S. to work with allies to secure electric vehicle metals

The United States must work with allies to secure the minerals needed for electric vehicle batteries and process them domestically in light of environmental and other competing interests, the White House said on Tuesday.

The strategy, first reported by Reuters in late May, will include new funding to expand international investments in electric vehicles (EV) metal projects through the U.S. Development Finance Corporation, as well as new efforts to boost supply from recycling batteries.

The U.S. has been working to secure minerals from allied countries, including Canada and Finland. The 250-page report outlining policy recommendations mentioned large lithium supplies in Chile and Australia, the world’s two largest producers of the white battery metal.

President Joe Biden‘s administration will also launch a working group to identify where minerals used in EV batteries and other technologies can be produced and processed domestically.

The White House acknowledged China’s role as the world’s largest processor of EV metals and said it would expand efforts to lessen that dependency.

“The United States cannot and does not need to mine and process all critical battery inputs at home. It can and should work with allies and partners to expand global production and to ensure secure global supplies,” it said in the report.

The White House also said the Department of the Interior and others agencies will work to identify gaps in mine permitting laws to ensure any new production “meets strong standards” in terms of both the environment and community input.

The report noted Native American opposition to Lithium Americas Corp’s Thacker Pass lithium project in Nevada, as well as plans by automaker Tesla Inc to produce its own lithium.

The steps come after Biden, who has made fighting climate change and competing with China centerpieces of his agenda, ordered a 100-day review of gaps in supply chains in key areas, including EVs.

As part of the recommendations from four executive branch agencies, Biden is being advised to take steps to restore the country’s strategic mineral stockpile and expand funding to map the mineral resources available domestically.

Some of those steps would require the support of Congress, where Biden’s fellow Democrats have only slim majorities.

The Energy Department already has $17 billion in authority through its Advanced Technology Vehicles Manufacturing Loan program to fund some investments.

The program’s administrators will focus on financing battery manufacturers and companies that refine, recycle and process critical minerals, the White House said.

(Reporting by Trevor Hunnicutt in Washington and Ernest Scheyder in Houston; Editing by Mary Milliken, Aurora Ellis and Sonya Hepinstall)