Black holes are regions in space where gravity is very strong—so strong that nothing that enters them can escape, including light. Theoretical predictions suggest that there is a radius surrounding black holes known as the event horizon. Once something passes the event horizon, it can no longer escape a black hole, as gravity becomes stronger as it approaches its center.

Theoretical physicist Stephen Hawking predicted that while nothing can escape from within them, black holes spontaneously emit a limited amount of light, which is known as Hawking radiation. According to his predictions, this radiation is spontaneous (i.e., it arises from nothing) and stationary (i.e., its intensity does not change much over time).

Researchers at Technion- Israel Institute of Technology have recently carried out a study aimed at testing Hawking’s theoretical predictions. More specifically, they examined whether the equivalent of Hawking radiation in an “artificial black hole” created in a laboratory setting was stationary.

“If you go inside the event horizon, there’s no way to get out, even for light,” Jeff Steinhauer, one of the researchers who carried out the study, told Phys.org. “Hawking radiation starts just outside the event horizon, where light can barely escape. That is really weird because there’s nothing there; it’s empty space. Yet this radiation starts from nothing, comes out, and goes towards Earth.”

The artificial black hole created by Steinhauer and his colleagues was approximately 0.1 millimeters long and was made of a gas composed of 8000 rubidium atoms, which is a relatively low number of atoms. Every time the researchers took a picture of it, the black hole was destroyed. To observe its evolution over time, they thus had to produce the black hole, take a picture of it and then create another one. This process was repeated many times, for months.

“The rubidium is flowing fast, faster than the speed of sound, and that means that sound cannot go against the flow,” Steinhauer explained. “Let’s say you were trying to swim against the current. If this current is going faster than you can swim, then you can’t move forward, you are pushed back because the flow is moving too fast and in the opposite direction, so you’re stuck. That’s what being stuck in a black hole and trying to reach the event horizon from inside would be like.”

“A black hole is supposed to radiate like a black body, which is essentially a warm object that emits a constant infrared radiation (i.e., black body radiation),” Steinhauer said. “Hawking suggested that black holes are just like regular stars, which radiate a certain type of radiation all the time, constantly. That’s what we wanted to confirm in our study, and we did.”

Hawking radiation is composed of pairs of photons (i.e., light particles): one emerging from a black hole and another falling back into it. When trying to identify the Hawking radiation emitted by the analog black hole they created, Steinhauer and his colleagues thus looked for similar pairs of sound waves, one coming out of the black hole and one moving into it. Once they identified these pairs of sound waves, the researchers tried to determine whether there were so-called correlations between them.

“We had to collect a lot of data to see these correlations,” Steinhauer said. “We thus took 97,000 repetitions of the experiment; a total of 124 days of continuous measurement.”

Overall, the findings appear to confirm that the radiation emitted by black holes is stationary, as predicted by Hawking. While these findings apply primarily to the analog black hole they created, theoretical studies could help to confirm if they can also be applied to real black holes.

“Our study also raises important questions, because we observed the entire lifetime of the analog black hole, which means that we also saw how the Hawking radiation started,” Steinhauer said. “In future studies, one could try to compare our results with predictions of what would happen in a real black hole, to see if ‘real’ Hawking radiation starts from nothing and then builds up, as we observed.”

At some point during the researchers’ experiments, the radiation surrounding their analog black hole became very strong, as the black hole formed what is known as an ‘inner horizon.” In addition to the event horizon, Einstein’s theory of general relativity predicts the existence of an inner horizon, a radius inside black holes that delineates a further region closer to its center.

In the region inside the inner horizon the gravitational pull is far lower, thus objects are able to move around freely and are no longer pulled towards the center of the black hole. Yet they are still unable to leave the black hole, as they cannot pass through the inner horizon in the opposite direction (i.e., heading toward the event horizon).

“Essentially, the event horizon is a black hole’s outer sphere, and inside it, there’s a small sphere called the inner horizon,” Steinhauer said. “If you fall through the inner horizon, then you’re still stuck in the black hole, but at least you don’t feel the weird physics of being in a black hole. You’d be in a more ‘normal’ environment, as the pull of gravity would be lower, so you wouldn’t feel it anymore.”

The Mars rover Perseverance captured a photo on February 18, 2021, of its own descent stage crashing onto Mars’ surface and triggering a plume of smoke. Image via NASA.

One of the coolest shots we’ve seen from Perseverance on Mars so far came from the day of its successful landing, February 18, 2021. Minutes after landing, Perseverance managed to look off into the distance and capture an image of its own descent stage crash landing on Mars’ surface.

Perseverance is busy on Mars examining its environs and recording all that it sees. It reports its findings with an anthropomorphized – and adorable – Twitter account @NASAPersevere. Its tweet about the descent stage crash landing was one of its first.

A moment of respect for the descent stage. Within two minutes of safely delivering me to the surface of Mars, I caught the smoke plume on one of my Hazcams from its intentional surface impact — an act that protected me and the scientific integrity of my landing site. pic.twitter.com/bG4dekrbvJ 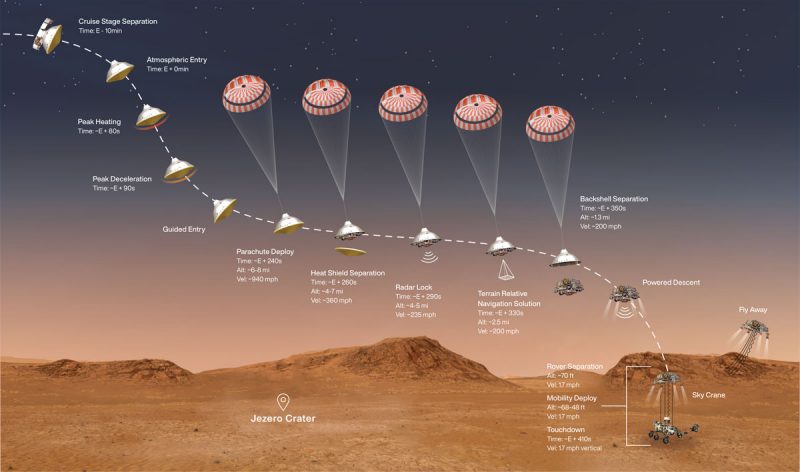 As you may have heard by now – or realized yourself – Mars is the only planet we know that’s populated by robots! A total of 18 spacecraft have been put in orbit around Mars, eight of which are still operating. Of the Mars’ rovers sent to Mars’s surface, five are still operational: Sojourner, Spirit and Opportunity, Curiosity, and Perseverance.

One Mars orbiter, the European Space Agency’s ExoMars Trace Gas Orbiter, also captured Perseverance on Mars’ surface, at its landing spot. It managed to find the rover and the pieces shed on descent, then tweeted an image:

There you are @NASAPersevere! I finally got the chance to take a photo of you in your new home ? #CountdownToMars
? @ExoMars_CaSSIS https://t.co/Zl2FhZ2Z8q #ExploreFarther #Mars pic.twitter.com/1CoOrs1r1S

The rover is near the bottom center of the image, with the heat shield a dark circular spot in the upper right, the descent stage to the left (and in the plume photo above), and the white parachute and back shell bright on the surface at far left. You can see from the overhead view the large ridge between the rover and the descent stage that the rover is looking toward in the top image.

Since 1960, nine countries have sent missions either to orbit Mars or attempt to land on its surface, and many of them have crashed and burned, quite literally.

February 2021 saw three missions successfully make it to Mars, both in orbit and on the surface. Perseverance was one. The other two were the UAE’s Hope mission and China’s Tianwen-1. 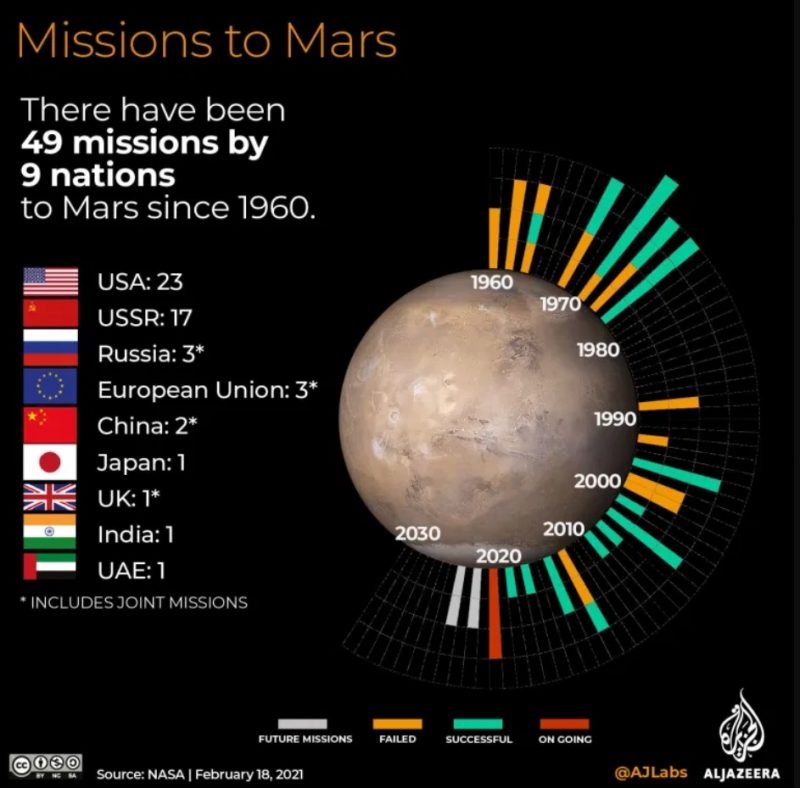 Many spacecraft have tried to land on Mars but few have succeeded. Image via Al Jazeera.

Bottom line: NASA’s Mars rover Perseverance tweeted a photo of the resulting plume of smoke from the impact of the descent stage.

If you witnessed a bright light flash across the sky Friday night in Chatham-Kent, you weren’t imagining things.

A fireball passed over the region around 10:07 p.m.

Peter Brown, a Western University professor, meteor scientist and planetary astronomer tweeted a video of the event. Brown described it as being “as bright as [the] full Moon.”

According to NASA, an initial analysis of the video shows that the meteor appears 90 km above Erieau on the northern shore of Lake Erie. It moved northwest at a speed of 105,800 km per hour as it crossed the Canada-U.S. border before ending 32 km above Fair Haven, MI.

“At its brightest, the fireball rivalled the quarter Moon in intensity,” read a statement on the NASA All Sky Fireball Network. “Combining this with the speed gives the fragment a mass of at least 2 kilograms and a diameter of approximately 12 centimetres.”

It’s believed that the meteor was caused by a fragment of a Jupiter family comet although an asteroidal origin is also possible. If you witnessed a bright light flash across the sky Friday night in Chatham-Kent, you weren’t imagining things.

A fireball passed over the region around 10:07 p.m.

Peter Brown, a Western University professor, meteor scientist and planetary astronomer tweeted a video of the event. Brown described it as being “as bright as [the] full Moon.”

According to NASA, an initial analysis of the video shows that the meteor appears 90 km above Erieau on the northern shore of Lake Erie. It moved northwest at a speed of 105,800 km per hour as it crossed the Canada-U.S. border before ending 32 km above Fair Haven, MI.

“At its brightest, the fireball rivalled the quarter Moon in intensity,” read a statement on the NASA All Sky Fireball Network. “Combining this with the speed gives the fragment a mass of at least 2 kilograms and a diameter of approximately 12 centimetres.”

It’s believed that the meteor was caused by a fragment of a Jupiter family comet although an asteroidal origin is also possible.