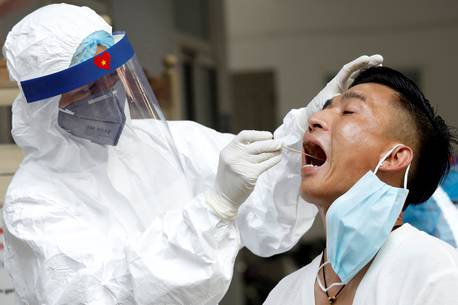 MOSCOW —
Russian authorities have given regulatory approval to a second coronavirus vaccine after early-stage studies, two months after a similar move prompted widespread criticism from scientists both at home and abroad.

Russian President Vladimir Putin made the announcement on Wednesday, during a televised meeting with government officials.

“We now need to increase production of the first vaccine and the second vaccine,” Putin said, adding that the priority was to supply the Russian market with the vaccines.

The peptide-based, two-shot vaccine, EpiVacCorona, was developed by the Vector Institute in Siberia and tested among 100 volunteers in early-stage, placebo-controlled human trials, which lasted more than two months and were completed two weeks ago. The volunteers were between 18 and 60 years old.

The scientists have yet to publish the results of the study. In comments to the media, scientists developing the vaccine said that it produced enough antibodies to protect the person who had it from the virus and that the immunity it creates could last for up to six months.

An advanced study involving tens of thousands of volunteers that is necessary to establish safety and effectiveness of the vaccine was scheduled to start in November or December.

Deputy Prime Minister Tatyana Golikova, who said earlier this week she took part in the early trials as a volunteer, said Wednesday that 40,000 people will take part in the advance studies of EpiVacCorona. It remained unclear whether the vaccine would be offered for a wider use while the trials are still ongoing.

Russia’s first vaccine, Sputnik V, was developed by the Moscow-based Gamaleya Institute and approved by the government on Aug. 11, after early trials among 76 volunteers were completed. Just like on Wednesday, Putin personally broke the news on national television and said one of his daughters had already been vaccinated, experienced slight side effects and developed antibodies.

As Russia boasted about being the first in the world to approve a vaccine, experts said that in line with established scientific protocol, much broader studies among tens of thousands of people were needed to ensure the safety and effectiveness of the vaccine before it is given widely.

Russian health authorities announced advanced trials of Sputnik V among 40,000 volunteers two weeks after it received government approval. Officials also said that vaccination of risk groups, such as doctors and teachers, will be carried out in parallel to the studies.

Golikova said Wednesday that 13,000 volunteers have so far enrolled in the studies of the Sputnik V vaccine.

The international criticism didn’t stop Russia from promoting Sputnik V abroad. Kirill Dmitriev, head of the Russian Direct Investment Fund that bankrolled the effort, said last month that the fund already has agreements with Mexico, India and Brazil, which ordered a total of 200 million doses, and dozens of other countries are interested in getting the vaccine.

Speaking at this year’s UN General Assembly, Putin offered to provide the Sputnik-V vaccine to UN staff for free. He described the offer as a response to popular demand: “Some colleagues from the UN have asked about this, and we will not remain indifferent to them.”

Russia has the world’s fourth largest coronavirus caseload with over 1.3 million infections. It has also reported over 23,000 deaths.

The outbreak in the country appeared to slow down in the summer, but the number of new infections started to grow rapidly last month. Over the past 11 days, Russian health officials have been reporting over 10,000 new cases every day. They registered a record number of 14,231 new cases on Wednesday.

Competition Bureau Canada watchdog may have to rely more on litigation after its proposed veto of a takeover was overturned, and this could make life harder for companies seeking to merge, the agency head said on Wednesday.

Secure then turned to the independent Competition Tribunal, which denied the bureau’s injunction and underscored “the high bar that needs to be met to prevent mergers … that we allege are anti-competitive,” he said.

The tribunal, he said, had acted so quickly that the bureau had not had time to present all its evidence, raising valid questions about the state of competition laws in Canada.

“This decision has significant implications for how we conduct future merger reviews, particularly in cases where there are competition concerns,” Boswell said in a speech to the Canadian Bar Association.

“This may mean that we must pursue a litigation-focused approach that is costly and less predictable for merging parties,” he added.

Secure relied on the so-called efficiencies defense, which is unique to Canada. Boswell said this procedure allowed the tribunal to allow an anti-competitive merger to proceed if the transaction was deemed to produce efficiency gains that were greater than its anti-competitive effects.

challenges for the Bureau to estimate and measure anti-competitive harm,” he said. “(We should) ask ourselves whether our competition laws are really working in the best interest of all Canadians.”

The bureau is an independent law enforcement agency set up to ensure fair competition. It investigates price fixing, bid-rigging and mergers, among other matters.

Canadian home price growth slows to near standstill in September

The Teranet-National Bank Composite House Price Index, which tracks repeat sales of single-family homes in 11 major Canadian markets, rose 0.1% in September from August, marking the fourth consecutive month in which the monthly price increase was lower than the previous month.

“The slowdown in price growth can be linked to the slowdown in housing sales reported in recent months by the Canadian Real Estate Association,” Daren King, an economist at National Bank of Canada, said in a statement.

Eight of the 11 major markets rose, led by a 1% gain for Winnipeg, while prices were stable in Montreal and fell in Vancouver as well as in Ottawa-Gatineau. It was the first time in seven months that gains were not seen in all 11 regions.

On an annual basis, the index was up 17.3%, decelerating after it notched record annual growth in August. It was paced by a 31.7% gain in Halifax and a 28.0% gain in Hamilton.

Crude prices have risen as supply has tightened, with the Organization of the Petroleum Exporting Countries maintaining a slow increase in supply rather than intervening to add more barrels to the market, and as U.S. demand has ramped up.

Globally, refiners have been boosting output thanks to high margins, one that can only be restrained by maintenance. U.S. refining capacity use dropped in the most recent week, but analysts noted that supply may continue to tighten if U.S. refiners also pick up processing again.

“Stronger demand and concerns about a drop in inventories when refiners were already running a low rate during maintenance season is making people concerned about what will happen when refiners have to ramp up production to meet what is very strong demand for gasoline and distillate,” said Phil Flynn, senior energy analyst at Price Futures Group in Chicago.

U.S. crude stocks fell by 431,000 barrels in the most recent week, the U.S. Energy Information Administration said, against expectations for an increase, and gasoline stocks plunged by more than 5 million barrels as refiners cut processing due to maintenance. [EIA/S]

U.S. stocks at the Cushing, Oklahoma delivery hub hit their lowest level since October 2018. Gasoline stocks are now at their lowest since November 2019, the EIA said, while distillate stocks fell to levels not seen since early 2020.

Oil prices have also been swept up in surging natural gas and coal prices worldwide in anticipation that power generators may switch to oil to provide electricity.

Saudi Arabia’s minister of energy said users switching from gas to oil could account for demand of 500,000-600,000 barrels per day, depending on winter weather and prices of other sources of energy.