REGINA —
The COVID-19 pandemic has impacted Saskatchewan’s economy with many people losing their jobs and small businesses closing, but according to an economics professor at the University of Regina, the province is in a strong position to recover after the pandemic.

“Over the last half of 2020, we saw economic activity pick up sharply, so that’s a good sign,” Jason Childs, associate professor of economics at the University of Regina, said.

The entertainment and service industries have been hit the hardest.

According to Statistics Canada, there are more than 22,000 fewer jobs than the previous year in the province.

“This has been a hard year for everyone but there are 23,000 people who are facing the additional hardship and stress of being out of a job,” Official Opposition Leader Ryan Meili said in a email. “The Sask Party keeps trying to paint a rosy picture about our economy but these numbers tell the true story.”

After seeing a sharp increase during the lockdown early in the pandemic, Saskatchewan’s unemployment rate was only one per cent higher in February, 2021 than the same month in 2020. 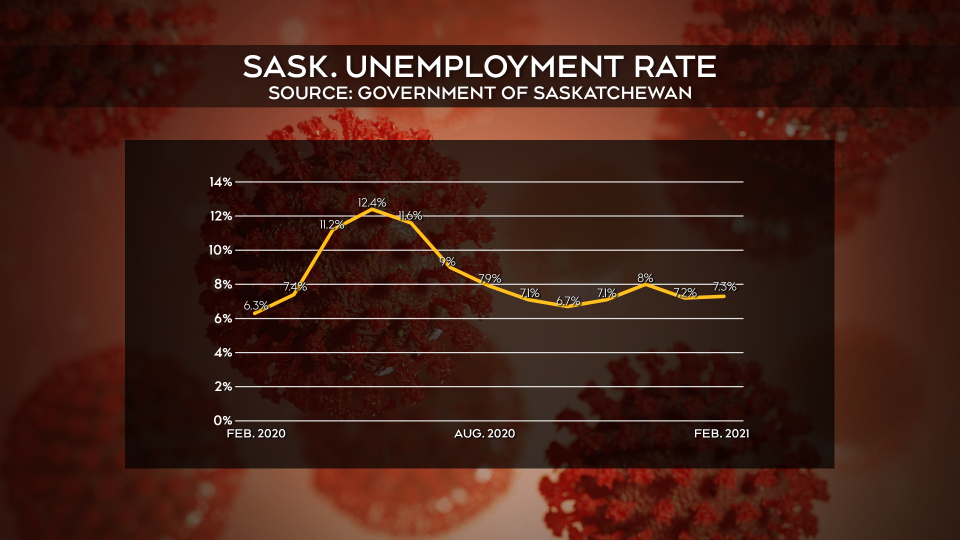 Merchandise exports were up 14.6 per cent year-over-year in January and retail sales also increased by 3.3 per cent in December, 2020 compared to the previous year.

“Our exports have held up really well, in fact, some increases have been seen in that sector and the agriculture sector did pretty well nationally last year, we don’t have the provincial numbers yet, but that looks pretty promising as well,” Childs said.

Saskatchewan chose to use less restrictions on the economy during the pandemic, allowing many personal services as well as restaurants and bars to remain open.

Childs said that appears to have given Saskatchewan an advantage with an end to the pandemic in sight.

“It appears to have helped employment in some sectors, particularly, the service industries where other jurisdictions you would have seen all those people be completely unemployed,” he said.

How long it takes for the province’s economy to truly recover remains unknown.

“This has never been done in recent history, we’ve never seen a government actively shut down an economy like this anywhere else in the world on this scale, so we’re gazing into our crystal ball for the future,” Childs said. “What we do know, what happened in the later half of 2020, when we started to see economic activity ramp up very quickly, so what that tells me is once the restrictions get lifted then we’re going to see a very rapid return to growth.”

Childs cautions against too much government stimulus, which he said could lead to inflation.

“If we see an introduction of a lot of new government programming, that can be a drag on the return to economic growth,” he said.