Linda Duvall thought her art had ended. Her artist’s practice had always involved collaboration and travel and people, and when COVID-19 hit, Duvall felt lost.

She started walking around her land, a nearly 32.5-hectare plot just south of Saskatoon.

“I just started walking the very first day, and I’d always walked a lot wherever I was but I had not spent a lot of time on the land. Some parts of it I’d never been on,” she said. “It was about five months later that it was like you know what, I think this is my art. This is it.”

She started taking pictures of what she saw and is now sharing that experience through photos sent out as postcards.

Artist Linda Duvall has spent the last several months immersed in nature. Every day she spends a few hours exploring her land – camera in hand – just south of Saskatoon. Lately she’s turned those photos into a creative project, pandemic style. We hear her in conversation with host Shauna Powers. 12:01

She said the more she walked, the more she noticed. On the open parts of her land, Duvall said she used to look over the prairie to the horizon. As she walked, she looked closer and closer at the details of the land.

“There is so much diversity on this land that I had no idea [about],” she said.

Duvall said she is very aware that she is sharing the land with other inhabitants: Cattle, deer, bugs, goats — and recently, an endangered American badger.

The badger has moved around on the land a bit and even came by the house to “visit,” Duvall said.

“I think part of me being here is trying to understand and respect what the different animals are doing,” she said. “I am very aware of first of all, not picking anything. Sort of caring for [the land].”

There are examples of interconnection everywhere, Duvall said, in nature and in life.

“I had found a way, through this project, to connect with people that form some part of my history, people that matter to me and that have mattered to me over the years in some way,” she said.

It was also, in a way, a form of grief. Duvall said she realized it was possible because of COVID-19 that she might never see some of these people again.

“As my world changed, eventually I realized how much that mattered to me that these people had contributed to my life in some way and I wanted to somehow reach out to them.”

The response so far has been great. Duvall said she wakes up almost every day to new notes from people near and far.

The Art of the Lie? The Bigger the Better – The New York Times

The Bateman Foundation hopes to harness the healing power of creativity with a series of free therapeutic art sessions.

Materials are provided for the free drop-in sessions, and an on-site art therapist will be available for assistance or mental wellness insight.

“It’s learning about art and nature and using those as tools for wellness,” says Lauren Ball, spokesperson for the Bateman Foundation. “We (wanted) to help people to feel a bit more powerful in their daily lives.”

In the summer of 2020 the foundation launched the Wellness Project, adapting its annual Nature Sketch program for the pandemic and providing it free of charge to small groups in the community.

The new drop-in therapeutic art sessions are an extension of that program, says Bell, and a direct response to the effects of the ongoing pandemic.

“Knowing that anxiety and depression are on the rise on this mass scale because of social isolation, we wanted to help in some way,” she said.

“It’s not about being a really great artist, it’s not necessarily about the final result of what you create, it’s about tapping into the creative potential and creative energy that exists within all of us, and using that to find some sense of joy, some sense of peace.”

Art therapist Kaitlin McManus will be on site to help participants who want to discover meaning in their artwork while they are creating.

All ages and experience level are welcome. Four people can participate simultaneously for 30 minutes each, unless there is no one waiting to join, in which case artists can stay longer. 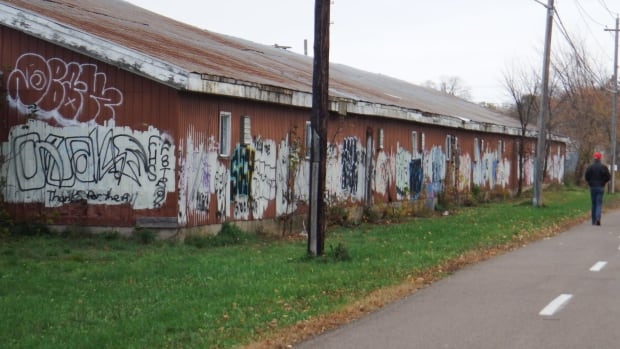 Artists, get out your spray cans.

The Fredericton Trails Coalition wants to revitalize part of the city trail between Rookwood Avenue and Smythe Street, near the New Brunswick Exhibition horse barns.

“It’s nothing but a big canvas,” said Stephen Marr, vice-president of the Fredericton Trails Coalition.

So, the group hopes to turn it into a huge mural and is looking for proposals.

The idea came about last year, when organizers were trying to come up with ways to celebrate the community trails — while following physical distancing rules because of COVID-19.

Bringing history and art together

“It’s something that’s happening all over Canada,” he said.

For years, the horse barns have been spray painted with bubble letters or funny looking smiley faces.

“Why not beautify it and put something meaningful on there that would actually become a destination for people on the trail?” he said.

The canvas is about 100 metres long and art applications are pretty open-ended.

“If you pigeonhole them you’re not going to allow them their creativity,” he said

There are a lot of people who pass by the area while cycling to work or out for a stroll with kids. So the group is hoping for something that focuses on community and its history.

“The topics are just too numerous to count.”

A call for artists was sent out in the middle of February.

The group has received about 28 applications so far. People have until the end of March to apply.

Then, the proposals will be evaluated by Fredericton’s art community, including gallery owners and art instructors.

Five artists will be selected in June. Then, they will be asked to do a mockup of the canvas.

The finalist will be announced on June 15, and will get to work after Canada Day. The artist will receive about $20,000 for the project and potential grants.

Marr said he isn’t worried about taggers destroying the artwork. He said there’s an unwritten rule between taggers that once a mural goes up, it’s off limits.

“It’s about community involvement and appreciation and inclusiveness on the trails.”

A one of a kind, out-door art experience is coming to the North.

For the first time, a projection show will be travelling to communities across the NWT, bringing short films by Indigenous artists from around the world to residents.

“A lot of the pieces are about how traditional knowledge and culture can be fluid and flow through different mediums,” says Davis Heslep, project technician for NACC.

Taking the art out of the theatre makes this more accessible, he adds.

The event is free and will be kicking off its first show in Inuvik on March 7 and closing in Fort Smith on March  20.

The show schedule is as follows:

This event is in partnership with GLAM Collective.

The show must go on

“We have to find money,” says Marie Coderre, executive director for NACC.

The financial situation has been tough for NACC since the pandemic started.

Coderre explains it was a scramble to put this event together as funding came through last minute.

Now the centre operates on a month-to-month basis, assuming they can secure funding.

Since COVID and suffering a revenue loss of $400,000, “everything fell apart,” she said.

“We just tried to find money anywhere we could.”

Luckily sponsorship was secured and the show can go on.

Until Coderre can secure funding, future NACC programs are unknown.

B.C. man wants your help to get aboard Japanese billionaire’s moonshot – Global News