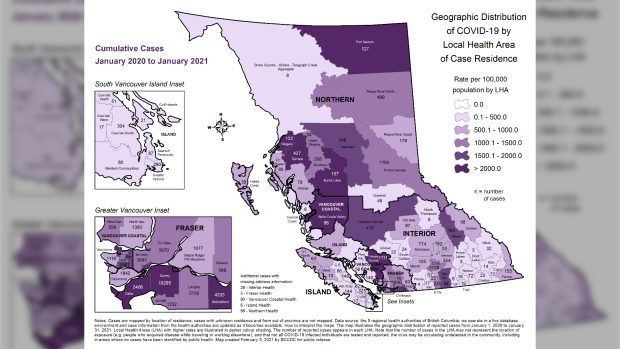 VANCOUVER —
A new map showing cumulative COVID-19 cases in B.C. since the start of the pandemic highlights significant surges in infection rates in certain regions over the last month.

B.C. added more than 15,000 new cases of the coronavirus to its cumulative total during the month of January, and many of them were outside the typical hotspots in the Lower Mainland, according to the most recent map from the B.C. Centre for Disease Control.

The map shows the total number of cases confirmed in each of the province’s “local health areas” from January 1, 2020 through Jan. 31, 2021, as well as the number of cases recorded per 100,000 residents of each region during that period.

On the latest map, several regions look dramatically different from how they looked just one month ago, when the BCCDC published its map of cumulative cases through the end of December.

Most of the new cases in the region are connected to a cluster of cases in Whistler. On Friday, Health Minister Adrian Dix said 547 cases were added in the resort municipality between Jan. 1 and Feb. 2.

“Almost all of the recent cases are associated with transmissions occurring within households and social settings, according to our contact tracing,” Dix said.

Howe Sound is not the only local health area that has seen its cumulative infection total double in the last month. Indeed, several regions have seen their totals grow by even greater multiples.

The Cariboo/Chilcotin local health area, which was also the site of a cluster of infections in January, recorded just 40 cases of COVID-19 in all of 2020. On the latest map, the region shows more than 10 times that many, with a cumulative total of 410.

Total cases in the Bella Coola Valley have also grown tenfold over the last month, from just 8 as of Dec. 31 to 86 as of Jan. 31.

In B.C.’s north, cumulative caseloads have spiked from 17 to 127 in the Fort Nelson local health area (a sevenfold increase), from 47 to 132 in the Nisga’a area (a nearly threefold increase) and from 167 to 427 in Terrace (an increase of more than double).

Each of these regions – Howe Sound, Cariboo/Chilcotin, Bella Coola Valley, Fort Nelson, Nisga’a and Terrace – has now recorded a number of cases equivalent to more than 2,000 per 100,000 residents.

That puts them on par with several regions in the Lower Mainland that have been hit hard by the pandemic.

As of Jan. 31, the local health area that includes most of the City of Surrey had recorded 19,295 cases of COVID-19, or roughly 28 per cent of all cases of the disease in B.C. to that point.

That said, Surrey’s share of overall cases has dropped by several percentage points over the last month. As of Dec. 31, the city accounted for roughly a third of all of B.C.’s cases.

Other local health areas in Metro Vancouver that have recorded more than 2,000 cases of COVID-19 per 100,000 residents include the City of Abbotsford, where 4,333 cases have been recorded overall, and the City of Delta, which had seen a total of 2,406 infections as of Jan. 31.

B.C.’s most-populous city, Vancouver, is divided into six different local health areas, only one of which – the one that includes most of the Downtown Eastside – has seen more than 2,000 cases per 100,000 residents.

Adding all of its local health areas together, the City of Vancouver has seen a total of 10,305 cases of COVID-19 since the pandemic began. That works out to roughly 15 per cent of all infections in B.C. as of Jan. 31.

If Needles Make You Nervous, How Do You Prepare For Your Coronavirus Vaccine? : Goats and Soda – NPR

The Manitoba government is taking action to see if people have cut in line to receive a dose of the COVID-19 vaccine earlier than they should have.

A new order under the Emergency Measures Act — which came into effect Wednesday — will allow Shared Health to investigate the eligibility of health-care workers who have been vaccinated, says a news release issued by the provincial government Friday.

“The emergency order announced this week establishes an audit process to determine if there may have been a notable volume of ineligible vaccinations,” a Manitoba government spokesperson told CBC News in a statement.

“Should this audit find such evidence, the order also establishes a process to take further action if warranted.”

The new order, which is in effect until April 15, applies to any vaccination applications made since Dec. 12, 2020.

Per the order, Shared Health can review information in a person’s vaccination application against other information it has in its possession, to make sure the information is accurate and that the person was eligible for vaccination.

Shared Health can disclose information to a regional health authority or department, so that agency can verify information. The agency receiving information must review the application versus other information in its possession, the order says.

If the agency finds that an individual was ineligible for vaccination, it must send all information it has about the person to Shared Health, the order says.

If Shared Health cannot determine whether someone jumped the queue, it can approach an employer, “other person or entity identified in a person’s vaccination application” to ask questions. The person or agency must share all of its information about the individual in question, upon request by Shared Health.

If the investigation confirms that someone gave false information in order to be vaccinated early, then that will be disclosed to the person’s employer, professional regulatory body, or a police service, the order says.

The auditing process to track potential queue-jumpers is still new, so the spokesperson said “it would be premature to speculate on its findings” thus far.

The cases were among 634 found across the province over the last 24 hours, health officials said in their final COVID-19 update of the week.

There are now 305 active cases of COVID-19 in the Vancouver Island region, including 17 people in hospital and two in critical care.

Island Health has identified the locations of 256 of the active cases. There are 139 in the Central Island, 62 in the North Island and 55 in the South Island.

Four more people have died of the virus in B.C., bringing the province’s death toll to 1,380. No deaths were reported in the Island Health region, where the death toll has reached 27.

“We offer our condolences to everyone who has lost loved ones to COVID-19,” said provincial health officer Dr. Bonnie Henry and Health Minister Adrian Dix in a joint statement.

The Island Health region has now confirmed 2,515 cases of COVID-19 since the pandemic began.

Health officials say the province’s vaccine rollout plan is gaining momentum, and remind British Columbians aged 90 and over that they can begin booking vaccine appointments on Monday.

Indigenous people over the age of 65 can also arrange for a vaccine appointment starting March. 8.

“In addition to our immunization program, we are regularly reviewing the public health restrictions to assess when we can safely ease them,” said Henry and Dix.

“We know many are keen to resume activities and we will open what we can when we have the confidence it is safe to do so.”

Mark Messier on Walter Gretzky: He made you ‘feel good about yourself’ – Sportsnet.ca

At home for a year, office workers complain of aches, pains and Zoom fatigue – CBC.ca