DAMASCUS, Syria — An attack on a passenger bus in southern Syria on Wednesday killed 28 civilians and injured others, according to the Syrian state news agency.

The state news agency SANA didn’t say how the attack was carried out, but called it a terrorist attack on the bus travelling in the Kobajjep area in southeastern Deir el-Zour province.

The bus was travelling between the central Homs province and Deir el-Zour to the east. The report offered no further details.

The area was once controlled by Islamic State militants, who despite losing territorial control in Syria, are still active in the desert and rural areas of eastern and southern Syria.

The Britain-based Syrian Observatory for Human Rights, a war monitor, said attackers ambushed three buses after setting up a checkpoint along the road. The Observatory’s director, Rami Abdurrahman, said the attackers were believed to be IS militants who laid explosive devices on the road and then opened fire at the buses. He said the assault killed 30, all of them soldiers returning home for the holidays.

The men’s Olympic triathlon suffered a rare and embarrassing false start on Monday as half the field dived in while the others were blocked by a media boat, leading to frantic action by a mini-flotilla of boats and jet skis to haul back swimmers.

Fifty-six men lined up on a pontoon in Tokyo Bay for the 06.30 local start but as the starter sent them away for the opening 1,500 metre swim leg, around a third found their way blocked by a camera boat.

Those left stranded on the pontoon watched as a mini-flotilla headed off those that had started swimming, with around half of them still ploughing on regardless despite the alert horn sounding repeatedly.

Eventually two jet skis combined to stop the leaders, who returned slowly to the start having undergone a more vigorous 200 metre warm up than they had expected.

After declaring an “invalid start” with no blame attached to any competitors, the race got underway safely around 10 minutes later.

Race winner Kristian Blummenfelt said that the chaos had not been a major problem.

“I saw the boat and found it quite strange,” the Norwegian said. “When I dived in I thought it would most likely be pulled back so I just kept to the left and went steady and tried to look at it as a positive, an extra warm up.” New Zealand’s bronze medallist Hayden Wilde was also phlegmatic – eventually. “I thought ‘I’ve had a blinder of a start here’ then realised that it was because hardly anyone else was around me and I felt pretty gutted,” he said.

“But then I tried to make a positive out of it – it was actually good to stretch the arms a bit after hanging around for a bit for 25 minutes before the start.”

Not everyone came out of it so well, however. Australian Jake Birtwhistle was kicked during the initial melee and suffered a broken nose, though he still went on to finish 16th.

“It was one of the roughest swims I have been in,” he told the Sydney Morning Herald. “It was a foot, it might even have been in the false start so it was all for nothing as well.”

Team mate Aaron Royle, who finished 26th, said: “I just had to laugh to myself as I was swimming back to the pontoon to think of all the races for that to happen it had to be the Olympics.

“I thought ‘well they’re not going to start the race because the boat is literally there’ and next minute…I guess, there was no communication between the starter and whoever was on the pontoon.”

A statement for world triathlon did not shed a great deal of light on how the mix up came about.

“At the start some of the athletes were blocked by an OBS (Olympic Broadcast Services) boat and as a result we had to start again the race due to an invalid start.” 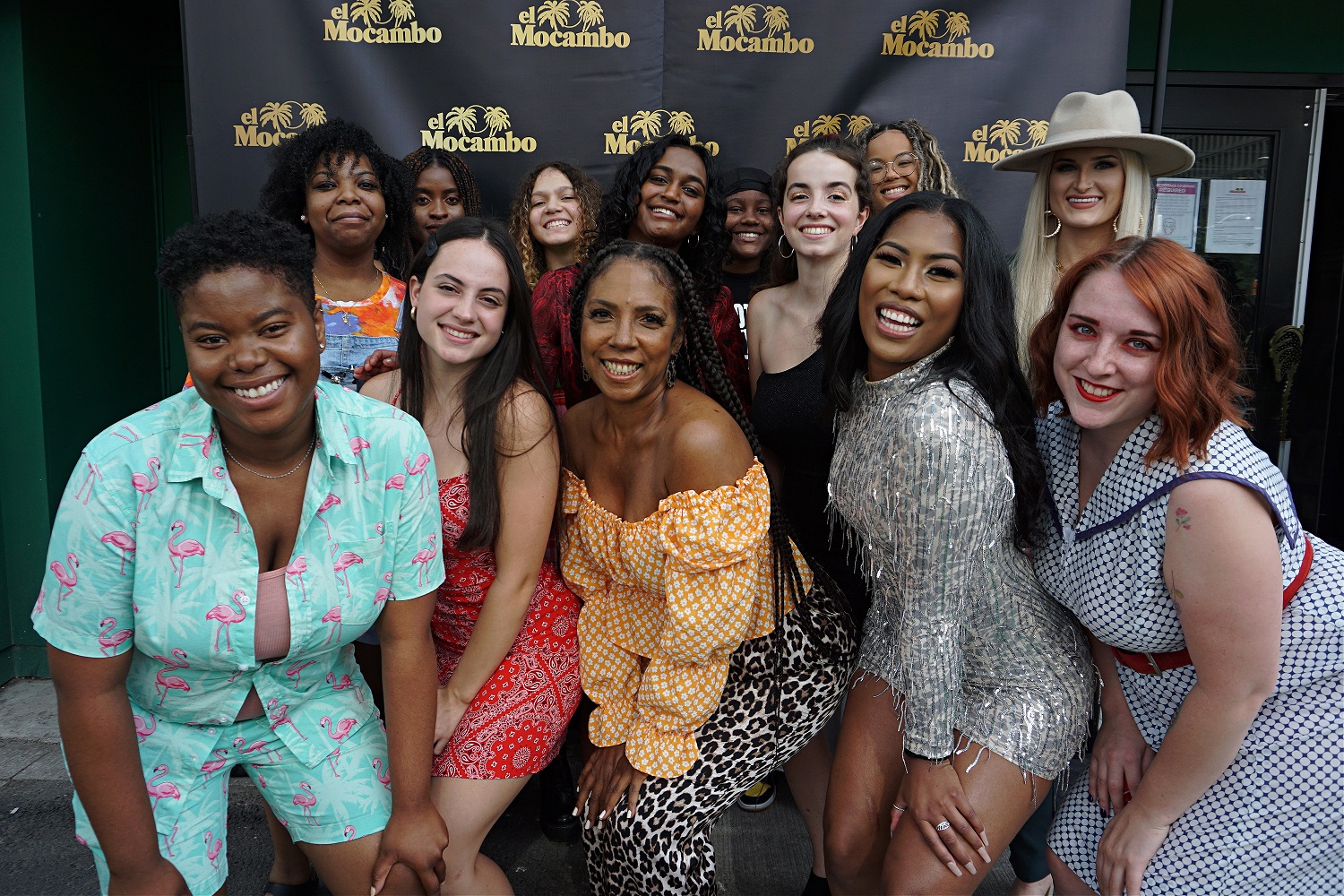 “We’re back!” exclaimed Honey Jam founder Ebonnie Rowe from the stage. “You didn’t think a little pandemic and a zombie apocalypse would stop us, did ya? Hell no.”

The event not only introduced the 17 artists who will be showcasing at the 26th annual event, live-streamed Aug. 12, with CBC Radio’s The Block host Angeline Tetteh-Wayoe as emcee, but announced a number of forthcoming pieces, as well as a recap of some accomplishments in spite of covid.

Rowe, the recent recipient of CIMA’s Trailblazer Award, told everyone how alum Jordan Alexander has a lead in Gossip Girl and landed the cover of Cosmo; Anjulie racked up a 100 million streams; and Savannah Ré won a 2021 Juno Award and got props from Timbaland who listened to her music on Instagram.

This year’s showcase is funded by Slaight Music, TD Ready Commitment, Ontario Creates, and FACTOR, and will feature artists from Ontario, Quebec, British Columbia, New Brunswick, Alberta and, for the first time, the Yukon. The online auditions, both live and submitted, were open to female-identifying talent, ages 14 to 25, in all genres.

CBC will air a Honey Jam radio special on Aug. 9 and a “Honey Jams” playlist, with songs past and current, will air live on CBC Music, starting Aug. 12, coincidentally Rowe’s birthday.

Honey Jam might’ve started 26 years ago as a showcase — Nelly Furtado was famously discovered at it — but it now presents many opportunities throughout the year to help the young women get their foot in the door.

Rowe rattled off many of them, including an upcoming trip to Nashville; a pre-recorded Flow 93.5 concert series from the Phoenix called Flow After Hours to be streamed at a later date; a workshop at Art House; a tour of Doc McKinney’s studio where The Weeknd’s House of Balloons was recorded; and attendance at SOCAN’s inaugural Creative Entrepreneur Summit.

Some of the alum, she said, also got brand deals with Adidas, Holt Renfrew and Ralph Lauren. And through their participating in Indie Week, export-ready Lu Kala and Nefe were invited to perform virtually for Brazil’s Music Pro Awards. The Artists for Social Change competition was also won by Megan De Lima.

“So we kept everybody pretty busy during the time leading up to it,” says Rowe, adding that one of her personal highlights this year was during a Q&A she did with Lennon Stella and JP Saxe for a VIP pre-Juno Awards experience for Honey Jammers.  “He said, ‘I didn’t know you were the lady who does Honey Jam? I love Honey Jam. Honey Jam’s a legend,’” she recounted. “I could barely speak.”

TOKYO — The Japan Olympics’ new gender equality monitor said Monday she’s been watching her country’s coverage of the Games and doesn’t like what she’s been hearing.

The Japanese media isn’t discriminating against female athletes, it’s just not taking them as seriously as the men.

“Many of the channels look at female athletes as ‘female’ or ‘girls’ or ‘wives’ or ‘mothers’ and not really as pure athletes,” Imoto said at the daily briefing run by the International Olympic Committee and Tokyo Games organizers.

Five of the eight medals Team Japan has won thus far were won by women, including three of the gold medals, according to the latest Olympics medal count.

Imoto, who competed for Japan at the 1996 Atlanta Olympics, did not specify which of Japan’s TV stations was using the sexist language. But in earlier interviews, Imoto noted that Japanese media covers golfers Hinako Shibune, who is a woman, and Hideki Matsuyama, who is a man, differently.

“Nobody talks about Mr. Matsuyama’s personal life and appearance,” Imoto said. “But for Ms. Shibuno, there are reports about her eating sweets and snacks and about her smile.”

Imoto also argued that it’s all too common in Japanese news headlines for female athletes to be described as “too beautiful.”

“You should see female athletes as athletes,” Imoto said. “In recent years, the number of gold medals in the Olympics has been higher for women. I want them to be treated equally. I would like to argue that it is strange to focus on things that are not related to competition, such as appearances and personal life.”

Imoto dove back into the sexism issue Monday as Japanese women have already scored significant successes at the Games.

Download the NBC News app for breaking news and politics

A quick survey of social media reactions to Imoto’s remarks suggested that support for more equal treatment of women and male athletes by the media was far from universal in Japan.

“I was surprised to hear that women are making noises saying that there was a gender inequality in the coverage of professional sports games,” one Twitter poster wrote. “Where do you think the money is coming from?”

Imoto was tapped to be the gender equality watchdog by the Tokyo 2020 Olympics organizers after the committee’s president, Yoshiro Mori, was forced out in February after he said female sports officials talk too much during meetings.

In an interview with Asahi Shimbun, one of the Japan’s biggest national newspapers, Imoto said she was shocked by Mori’s comments.

“Little has changed since my competition days,” Imoto said. “Things are too backward.”

Imoto, who works for UNICEF as an education specialist, said she hoped to “become a bridge” to the largely male-dominated sports industry.

Mori’s ouster also prompted some soul-searching by Japanese media and renewed calls for gender equality in the news business.

It was Topic A during a symposium in March organized largely by the Japan Mass Media Culture Information Workers’ Union Conference, Kyodo News reported.

“It’s embarrassing to find (mass media) organizations in a situation like this, even though they have been rapping Mr. Yoshiro Mori’s misogynist remarks,” said Mami Yoshinaga, who heads the Japan Federation of Newspaper Workers’ Union.

NBC News has reached out to the union for additional comment.

Kaori Hayashi, a journalism professor at the University of Tokyo’s graduate school, said at the conference the reason why Japanese media persists in promoting sexist stereotypes is because it’s “a man’s world.”

There were no women in the top news production positions at the six Tokyo-based commercial TV broadcasters as of last December, Kyodo News reported, citing a labor union survey.

And just three of the 159 people who sit on the boards of the four industry associations representing newspapers, commercial broadcasters or publishers were women.

“If decision-making positions are occupied by men, news articles, broadcast content and even the way news items are lined up will reflect a male perspective,” Hayashi said.

Japan is one of the world’s most advanced countries, but it consistently ranks low in the World Economic Forum’s gender gap rankings. It ranks 120 out of 156 countries in the 2021 survey, well behind the United States which came in 30th. Iceland was ranked number one.