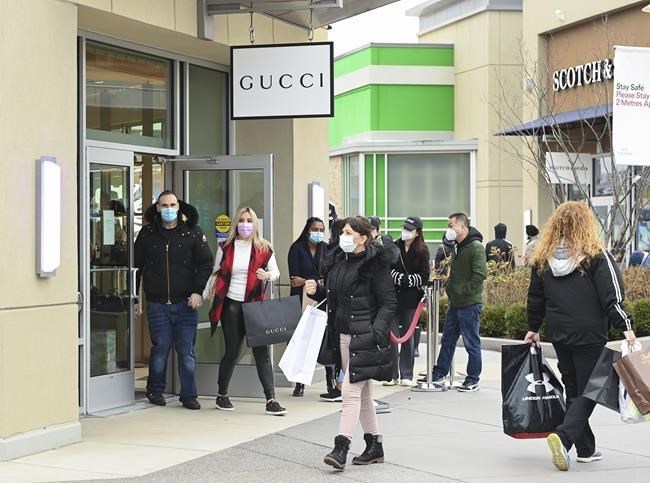 OTTAWA — Better-than-expected growth in November pushed the Canadian economy above pre-pandemic levels for the first time in nearly two years, but the Omicron surge in COVID-19 cases is expected to deal it yet another setback to start 2022.

Statistics Canada said Tuesday that real gross domestic product grew for a sixth straight month in November, as it posted a monthly gain of 0.6 per cent to bring it 0.2 per cent above pre-pandemic levels recorded in February 2020.

The growth fizzled though to end the year as the agency said its initial estimate suggests real GDP in December was essentially unchanged.

However, BMO chief economist Douglas Porter said the weakness could be short-lived.

He pointed to growth in November despite devastating flooding in British Columbia, and that the economy looks to have held its ground in December despite Omicron.

“We know that the economy can come back pretty quickly when things reopen,” Porter said.

“So, provided this latest, slight reopening that we’re seeing here at the start of February lasts, I would anticipate a pretty nice rebound in the economy through the rest of the quarter.”

The statistics agency also said its initial estimate is that the economy grew by 4.9 per cent for the full year. The result, which won’t be finalized until next month, is a turnaround from 2020 when the Canadian economy suffered its worst year on record as output shrank by 5.4 per cent.

Driving to the finish line of 2021, Statistics Canada estimated the economy grew at an annualized rate of 6.3 per cent in the fourth quarter, which, if it holds up, would mark the fastest quarterly growth last year.

Gains in November were seen in wholesale trade, which saw its largest monthly growth since July 2020, and manufacturing.

There was also growth in the finance and insurance sector that Statistics Canada attributed to atypically high trading activity in November as investors moved funds to safer assets because of the uncertainty linked to Omicron when it first emerged.

Accommodation and food services also saw increases in November with more travellers and looser restrictions on capacity limits in bars and restaurants in Ontario and Quebec.

Tu Nguyen, an economist with consulting firm RSM Canada, said the high vaccination rate across Canada has helped the recovery.

“That allowed us to fill up arenas, and theatres, and hotels, and restaurants, and we saw a significant uptick in in-person activity,” Nguyen said.

Despite the growth for restaurants and sporting events, Stephen Brown, senior Canada economist with Capital Economics, noted the arts and entertainment sector was 20 per cent below pre-pandemic levels, and accommodation and food services still far from its February 2020 mark.

The Bank of Canada warned last week that it expects Omicron to dampen spending in the first quarter, and slow growth to an annualized rate of about two per cent.

Whatever economic growth the country loses in the first quarter will be pushed to the second quarter of 2022, Nguyen said.

Despite an expected contraction in January, Royce Mendes, managing director and head of macro strategy at Desjardins, said he expects the central bank to look at the strong end of 2021 and go forward with a first rate hike in March.

This report by The Canadian Press was first published Feb. 1, 2022.

After a huge year for growth, the U.S. economy is about to slam into a wall – CNBC The resignation marked the biggest departure of President Alberto Fernandez’s government after infighting escalated within the ruling coalition. No replacement was immediately named.

The price of Tether measured in Argentine pesos jumped on major exchanges soon after the minister announced his resignation on Twitter, according to the CryptoYa website, which reports minute-by-minute prices. The coin fetched 257 Argentine pesos on the Binance exchange, up 6.6%. On the Lemon Cash exchange, prices jumped 11% to 279 pesos.

Crypto is the only market trading in Argentina on Saturday. While volumes are small, the moves could indicate unease, at least among some traders, over the growing rift within the ruling coalition and concern over the government’s ability to tackle rising inflation and other economic challenges.

Argentina is one of the nine countries with the highest adoption of cryptocurrencies, according to Chainalysis, a site specializing in crypto and blockchain. In a country with recurring currency crises and inflation running around 60% annually, two-thirds of Argentines who invest in crypto say they do so to protect their savings, according to a study by Buenos Aires-based Wunderman Thompson.

Charting the Global Economy: Factories Slow Down From US to Asia – BNN Manufacturing from the US to Asia is very much in a slowdown as factories continue to struggle with supply snarls, labor shortages and elevated materials costs.

A measure of US manufacturing activity weakened in June to a two-year low, and several regional Federal Reserve surveys indicated business activity shrank. Factory purchasing managers’ gauges across Asia eased, with South Korea, Thailand and India among those showing the biggest declines, according to S&P Global.

Consumer spending fell in May for the first time this year and prior months were revised lower, suggesting an economy on somewhat weaker footing than previously thought amid rapid inflation and Fed interest-rate hikes.

Regional Fed manufacturing surveys have taken on a grimmer tone, with four of five indicating business activity shrank in June. Separately, a measure of overall manufacturing slid to a two-year low as new orders contracted, restrained by lingering supply constraints and some softening in demand.

The pandemic housing boom is careening to a halt as the fastest-rising mortgage rates in at least half a century upend affordability for homebuyers, catching many sellers wrong-footed with prices that are too high.

Confidence in the euro-area economy slipped as households become more pessimistic amid fears a Russian energy cutoff will spark a recession. At the same time, they’re less worried about inflation than they were a month ago, though there’s a split between core and peripheral euro-area countries.

After suffering from unprecedented shocks in recent years, the UK is succumbing to more intractable problems marked by plodding growth, surging inflation and a series of damaging strikes.

China’s economy showed some improvement in June as Covid restrictions were gradually eased, although the recovery remains muted. That’s the outlook based on Bloomberg’s aggregate index of eight early indicators for this month. The overall gauge returned to the neutral level after deteriorating for two straight months.

Japan’s factory output shrank at the fastest pace since the height of the pandemic as the lagged impact of China’s virus lockdowns continued to disrupt supply chains and economic activity in the region. The weakness in manufacturing extended across Asia, particularly in South Korea, Thailand, India and Taiwan.

Colombia’s central bank delivered its biggest interest rate increase in over two decades. Policy makers are bracing for another spike in annual inflation that’s already above 9%.

Two years after Argentina emerged from its latest default, a debt crisis in brewing once again. This time, the immediate trouble is in the local bond market, where creditors have become reluctant to roll over maturing government bonds.

Zambia’s inflation rate dropped below 10% for the first time in almost three years in June, bucking a global trend of record consumer-price growth. Optimism over the nation’s economy since the election of Hakainde Hichilema as president in August, a potential debt restructuring and a $1.4 billion bailout package from the International Monetary Fund has seen a rally in the local currency, which has helped contain prices.

Differences in underlying inflation trends call for different policy outlooks among the world’s top central banks, according to Bloomberg Economics. The Fed will have to go well into restrictive territory, the Bank of England may go a little above neutral and the European Central Bank might not even get that far.