Inflation in Canada unexpectedly picked up in October, partly on the back of rising home ownership costs.

Annual inflation accelerated to 0.7 per cent, from 0.5 per cent in September, Statistics Canada reported Wednesday in Ottawa. That exceeded the 0.4 per cent anticipated by economists in a Bloomberg survey. An index of replacement costs for homeowners rose by the most in 30 years last month, the agency said.

Even with the increase, price pressures remain muted as the nation grapples with the aftermath of the pandemic and renewed restrictions. The Bank of Canada predicts persistent slack in the economy and labor market will keep inflation below its two per cent target until at least 2023, allowing policy makers to keep interest rates historically low for the foreseeable future.

“October marks a mild high-side surprise for Canadian inflation,” Doug Porter, chief economist at the Bank of Montreal, said in a report to investors. “But the big picture is that inflation remains below one per cent, and probably isn’t going far with the economy about to face some further near-term challenges amid renewed restrictions.”

The acceleration narrows gap between Canada and inflation in the U.S., which has been hovering around one per cent. 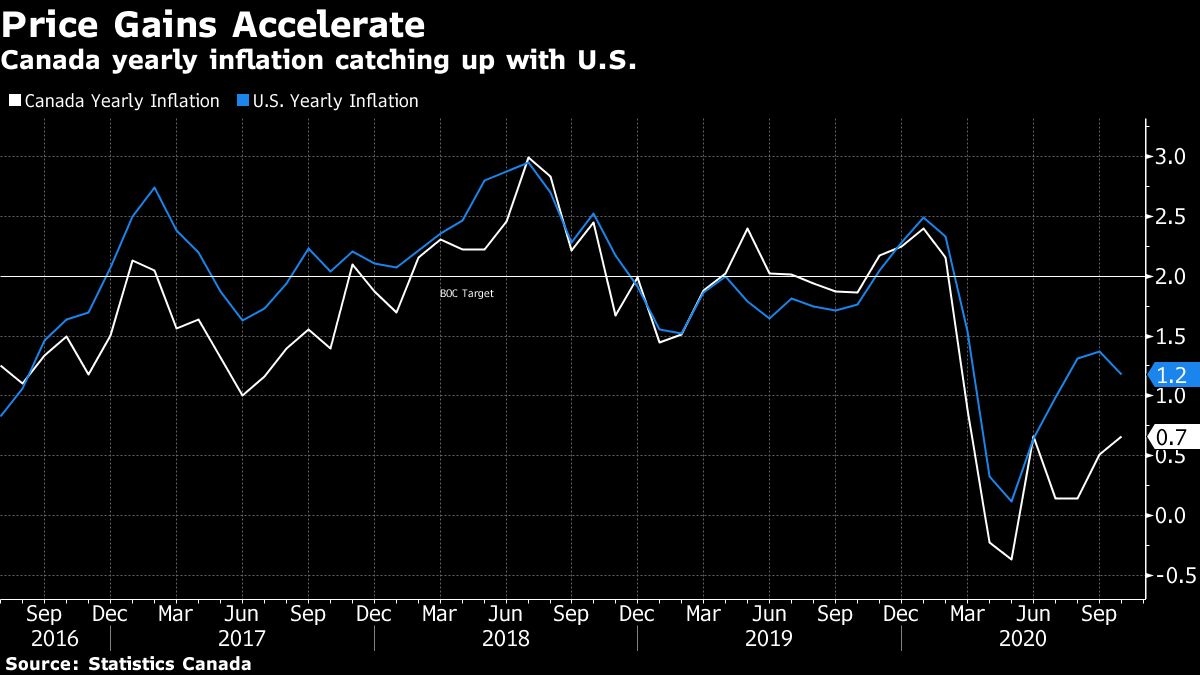 The homeowners’ index, derived from the price of new homes, rose 1.4 per cent, the largest monthly increase since June 1991, the agency said.

On a monthly basis, prices rose 0.4 per cent, compared with a 0.2 per cent median forecast in the Bloomberg survey. Food and shelter costs were the main upward contributors.

Core inflation measures — often seen as a better gauge of underlying price pressures — ticked up to an average of 1.77 per cent in October, the highest reading since February, from 1.7 per cent in September. Economists were forecasting core inflation at 1.73 per cent.

A former Vancouver resident is sharing his first-hand experience as one of the thousands of people who’ve agreed to participate in COVID-19 vaccine trials around the world.

Peter Wearing, who now lives in Arizona, is participating in the Stage 3 trial for the Oxford University-AstraZeneca vaccine.

The U.K.-based drug maker’s vaccine is seen as an important part of the vaccine solution, as it does not need to be transported at supercooled temperatures, and is being offered at a fraction of the price of its rivals.

Both elements make it particularly promising for the developing world.

“I felt that I was healthy and I’ve had vaccines in the past and never had adverse reactions, so I felt that I’ll do my part,” Wearing told Global News.

“My first visit I signed lots of paperwork, they took four vials of blood, I had a physical from a doctor.”

He was then given two shots, two months apart — the second just two days ago. Wearing isn’t sure if he’s getting the actual vaccine, or is in a control group getting a placebo.

He said some people do get reactions typical of a flu vaccine, such as rashes or fevers, but he did not.

“You don’t even really feel it going in, it’s that fine of a needle. The next day your muscle is a bit tender,” he said.

It later emerged that they’d discovered the half-dose advantage due to a manufacturing error that saw some people get a lower dose unintentionally. The company may conduct a future clinical trial specifically around the half-then-full dose program.

Wearing said it was important for him to participate because he still remembers an era when children commonly got polio. Vaccine development was critical to eradicating that disease.

“I have a lot of friends that are anti-vaxxers. I mean, they’re pretty serious about it, they’ve even challenged me on this,” he said.

“About five years ago I took the time to read what they said is their research, and then I read the counter-research. I’m a science guy, I like science, and in the end I came down on the side of traditional science.”

Wearing said he’s given a two-year commitment to the project, and doctors will continue to take blood samples to test Wearing for antibodies to the virus.

But he’s also been told that if he is, in fact, in the placebo group he will be given the actual vaccine if and when it wins approval in the U.S.

“The fact that this is coming out so fast, less than a year, is really exciting,” he said.

Canada has preordered 20 million doses of the AstraZeneca vaccine, but it is unclear when it could win regulatory approval.