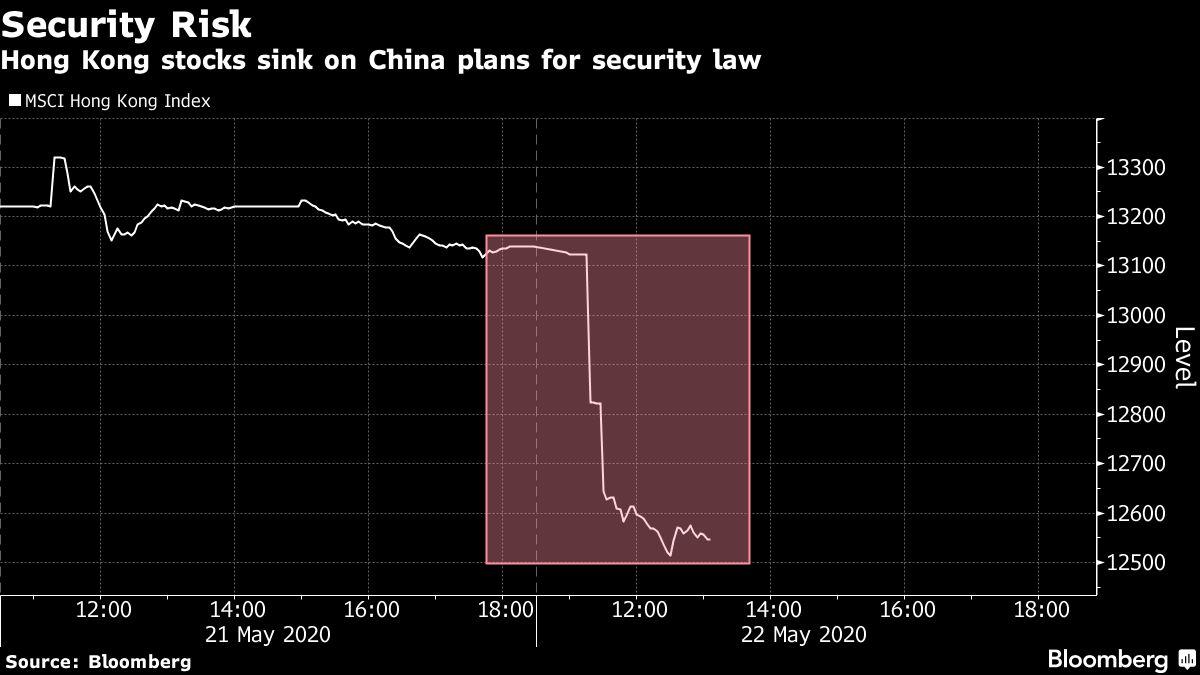 (Bloomberg) — Asian stocks fell Friday, with the bulk of losses coming in Hong Kong, as China announced plans to impose a national security law on the city, which threatened to further escalate tension between Washington and Beijing. Treasuries climbed with the dollar.

Hong Kong’s Hang Seng fell over 4%. Losses were more modest in Tokyo and Sydney, while equity futures in Europe and the U.S. retreated. The yuan was steady as China’s National People’s Congress began with pledges to sell bonds and omit a GDP target for this year due to uncertainties stemming from the pandemic. Indian bonds rallied after the country’s central bank cut its policy rate in an unscheduled move.

Earlier, the S&P 500 closed lower, with signs mounting that President Donald Trump Trump will make his tough-on-China stance a key element of his re-election bid. China responded to accusations from Trump, warning that it will safeguard its sovereignty, security and interests, and threatened countermeasures.

Investors are parsing through initial details to come out of the NPC, China’s biggest political event of the year. Beijing is also preparing to impose national security legislation in Hong Kong, a show of legal force that could exacerbate tensions and threatened to reignite violent protests.

“The geopolitical risks are meaningful,” David Riley, chief investment strategist at BlueBay Asset Management LLP said on Bloomberg TV. “It’s a concern for the market, is a potential source of weakness and a correction.”

Meanwhile, the Bank of Japan kept its main policy rate while saying it will start a new lending program next month. India’s central bank chief is due to speak later Friday.

These are some of the main moves in markets:

If you don’t have rock-solid finances, now is not the time to buy a home – The Globe and Mail

Photo: The Canadian Press
FILE – In this Thursday, Aug. 31, 2017, file photo, a flame burns at the Shell Deer Park oil refinery in Deer Park, Texas. Oil prices are plunging Sunday, March 8, 2020, amid worries that an OPEC dispute will lead a virus-weakened economy to be awash in an oversupply of crude.

OPEC and allied nations agreed Saturday to extend a production cut of nearly 10 million barrels of oil a day through the end of July, hoping to encourage stability in energy markets hard hit by the coronavirus-induced global economic crisis.

Ministers of the cartel and outside nations led by Russia met via video conference to adopt the measure, aimed at cutting the excess production depressing prices as global aviation remains largely grounded due to the pandemic. The curbed output represents some 10% of the world’s overall supply.

But danger still lurks for the market, even as a number of nations ease virus-related lockdowns, and enforcing compliance remains thorny.

Algerian Oil Minister Mohamed Arkab, the current OPEC president, warned meeting attendees that the global oil inventory would soar to 1.5 billion barrels by the mid-point of this year.

“Despite the progress to date, we cannot afford to rest on our laurels,” Arkab said. “The challenges we face remain daunting.”

That was a message echoed by Saudi Oil Minister Abdulaziz bin Salman, who acknowledged “we all have made sacrifices to make it where we are today.” He said he remained shocked by the day in April when U.S. oil futures plunged below zero.

“There are encouraging signs we are over the worst,” he said.

The decision came in a unanimous vote, Energy Minister Suhail al-Mazrouei of the United Arab Emirates wrote on Twitter. He called it “a courageous decision.”

But it is only a one-month extension of a production cut that was deep enough “to keep prices from going so low that it creates global financial risk but not enough to make prices very high, which would be a burden to consumers in a recessionary time,” said Amy Myers Jaffe, senior fellow at the Council for Foreign Relations.

Jaffe said improved oil demand in China and Asia and a gradual stabilization of demand in the United States and to some extent Europe, where there’s some cautious economic reopening, were encouraging for producers.

OPEC has 13 member states and is largely dominated by oil-rich Saudi Arabia. The additional countries involved part in the so-called OPEC Plus accord have been led by Russia, with Mexico under President Andrés Manuel López Obrador playing a considerable role at the last minute in the initial agreement.

Crude oil prices have been gaining in recent days, in part on hopes OPEC would continue the cut. International benchmark Brent crude traded Saturday at over $42 a barrel. Brent had crashed below $20 a barrel in April.

Earlier this year, when demand was down, Saudi Arabia was flooding the market with crude oil, helping to send prices down to record lows. That prompted the U.S. government in April to take the unusual step of getting involved in OPEC’s negotiations, pressuring members of the cartel to agree to cuts to help end the oil price free-fall.

At the time, President Donald Trump said the U.S. would help take on some of the cuts that Mexico was unwilling to make. And perhaps more importantly, a group of U.S. senators upset over the impact on U.S. shale production said at the time that they had drafted legislation which would remove American forces, including Patriot Missile batteries, from Saudi Arabia.

In a rambling Rose Garden speech on Friday, Trump took credit for the April deal. “People said that wasn’t possible but we got Saudi Arabia, Russia and others to cut back substantially,” he said. “We appreciate that very much.”

U.S. Energy Secretary Dan Brouillette tweeted his applause Saturday for the extension, which he said comes “at a pivotal time as oil demand continues to recover and economies reopen around the world.”


© Reuters. HSBC’s building in Canary Wharf is seen behind a City of London sign outside Billingsgate Market in London


(Reuters) – HSBC Holdings Plc (L:) Chairman Mark Tucker has warned Britain against a ban on networking equipment made by Huawei Technologies Co Ltd, claiming the bank could face reprisals in China, the Telegraph reported on Saturday.

Britain designated Huawei a “high-risk vendor” in January, capping its 5G involvement at 35% and excluding it from the data-heavy core of the network. It is looking at the possibility of phasing Huawei out of its 5G network completely by 2023, according to officials.

Disclaimer: Fusion Media would like to remind you that the data contained in this website is not necessarily real-time nor accurate. All CFDs (stocks, indexes, futures) and Forex prices are not provided by exchanges but rather by market makers, and so prices may not be accurate and may differ from the actual market price, meaning prices are indicative and not appropriate for trading purposes. Therefore Fusion Media doesn`t bear any responsibility for any trading losses you might incur as a result of using this data.

Fusion Media or anyone involved with Fusion Media will not accept any liability for loss or damage as a result of reliance on the information including data, quotes, charts and buy/sell signals contained within this website. Please be fully informed regarding the risks and costs associated with trading the financial markets, it is one of the riskiest investment forms possible.

(Reuters) – HSBC Holdings Plc (HSBA.L) Chairman Mark Tucker has warned Britain against a ban on networking equipment made by Huawei Technologies Co Ltd, claiming the bank could face reprisals in China, the Telegraph reported on Saturday.

Britain designated Huawei a “high-risk vendor” in January, capping its 5G involvement at 35% and excluding it from the data-heavy core of the network. It is looking at the possibility of phasing Huawei out of its 5G network completely by 2023, according to officials.

Reporting by Ismail Shakil in Bengaluru; Editing by Dan Grebler

No new coronavirus cases in Manitoba on Saturday – Globalnews.ca