Establishing a new contemporary art museum in Moncton or Dieppe could cost $38 million, according to a feasibility study presented to a meeting of representatives from both cities Wednesday afternoon.

The study by Lord Cultural Resources outlined potential costs, staffing and other aspects of how such a museum could work.

The museum would include works of art from the 1960s to the present featuring Acadian and other Atlantic Canadian artists. The study says there aren’t any major museums focused on contemporary art in Atlantic Canada and it would not  compete with other existing museums and art galleries.

No final decisions on whether to go ahead with the concept have been made, and it’s not clear when further decisions will be made.

“It’s still preliminary at this point,” Mayor Dawn Arnold said in an interview. “There’s still many, many more stages to go.”

She said there are lots of unknowns.

Let’s cross our fingers that there’s a future for this project.– Moncton Coun. Blair Lawrence

“We wouldn’t be here at this point in time if we weren’t interested in the project,” Dieppe Mayor Yvon Lapierre said during the meeting.

Daniel Chiasson, board chair of Atlantic(que) Image Art Inc., called it a “grand, crazy idea” that the group has been pursuing with both cities.

Chiasson said the concept could still be possible if one city opts not to go ahead, but suggested the communities work together on the idea.

“Let’s cross our fingers that there’s a future for this project,” Moncton Coun. Blair Lawrence said. The study did not consider any specific sites in either city or include conceptual plans.

“We don’t know yet where it’s going to be located because we have come to that part of the project yet,” Chiasson said.

The study’s cost estimate is based on a newly constructed building on purchased land, but it could be included in a mix-used structure or in an existing building that’s repurposed. It could include multi-use rooms and a café space.

Chiasson said the cost estimate would likely remain the same if an existing building is used because of renovation work.

The study calls for construction costs to be covered by the federal, provincial levels of government in addition to private sources.

It suggests a structure of about 50,000 square feet somewhere near the Petitcodiac River that would employ around 18 full-time staff. Moncton’s Resurgo Place museum is about 30,000 square feet.

The study pegs the estimated annual operating cost of the art museum at about $1.9 million, with up to $1.3 million of that coming from municipalities in the region and private sources.

The study suggests making construction funding from other levels of government contingent on municipalities agreeing to contribute to operating costs.

The collections would be donated or offered on loan from private sources.

“We don’t see any problem getting a hold of a very prestigious collection,” Chiasson said.

While Moncton staff earlier this year said the museum would focus on Acadian and Indigenous works, Chiasson said it would likely take a broader Atlantic Canadian view.

The study estimates the museum could draw about 48,000 visitors per year during its first two years, dropping to about 40,000 annually.

The study recommends free admission to those under 25 years of age.

“One of the objectives is to make this museum as accessible as possible to all people,” Chiasson said.

Alfredo Jaar makes art from the news – The Economist

Estevan's adjudicated art show for 2020 has been cancelled – Estevan Mercury

The Montreal Museum of Fine Arts continues to move ahead with big plans for new Inuit-focused exhibits.

That’s despite the challenges of organizing exhibits and then welcoming visitors under COVID-19 restrictions.

The museum intends to continue strengthening the links between the north and south of Quebec, said Lisa Qiluqqi Koperqualuk, a curator and mediator of Inuit art at the museum.

One of Koperqualuk’s goals is to renew the museum’s exhibition of its Inuit collection, which is now housed in a small room.

The planned reinstallation will allow for a larger display of works in the current collection, as well as the inclusion of new pieces from young artists, Koperqualuk said.

These are likely to be grouped around different themes related to Inuit culture, such as qaqqiq, or family—”the basis of our communities,” and sila—”the relationship with our environment,” she said.

“But nothing is definite yet because of the pandemic,” Koperqualuk said.

Still, Inuit can look forward to learning more about their culture through this art, which talks about shamanism and legends, she said.

“Through art you can gain a good understanding of things that are important and expressed through art,” Koperqualuk said. “Our storytelling was stopped by missionaries, but it continues through art. So even us, we can learn about ourselves.”

The museum has several exhibitions planned with a Nunavik connection, including an exhibition of acclaimed artist Matiusi Iyaituk of Ivujivik.

Other plans include the repatriation of a qajaq from Rennes, France.

This qajaq had been in the private collection of historian Christophe-Paul de Robien, who died in 1756. It’s thought to be the oldest intact Canadian kayak in the world, said former museum director Nathalie Bondi in June.

Under Bondi, who was dismissed this summer, the museum moved to align itself more closely with Inuit in 2018, signing an agreement with Nunavik’s Avataq Cultural Institute, which is based in Montreal.

Plans then included a move by Avataq from its present location in Westmount to museum-owned properties on Crescent St.

But Avataq now wants to move its head office to Nunavik, so this Crescent St. space may develop into more of a cultural centre, Avataq’s executive director Robert Fréchette told Nunatsiaq News earlier this summer. 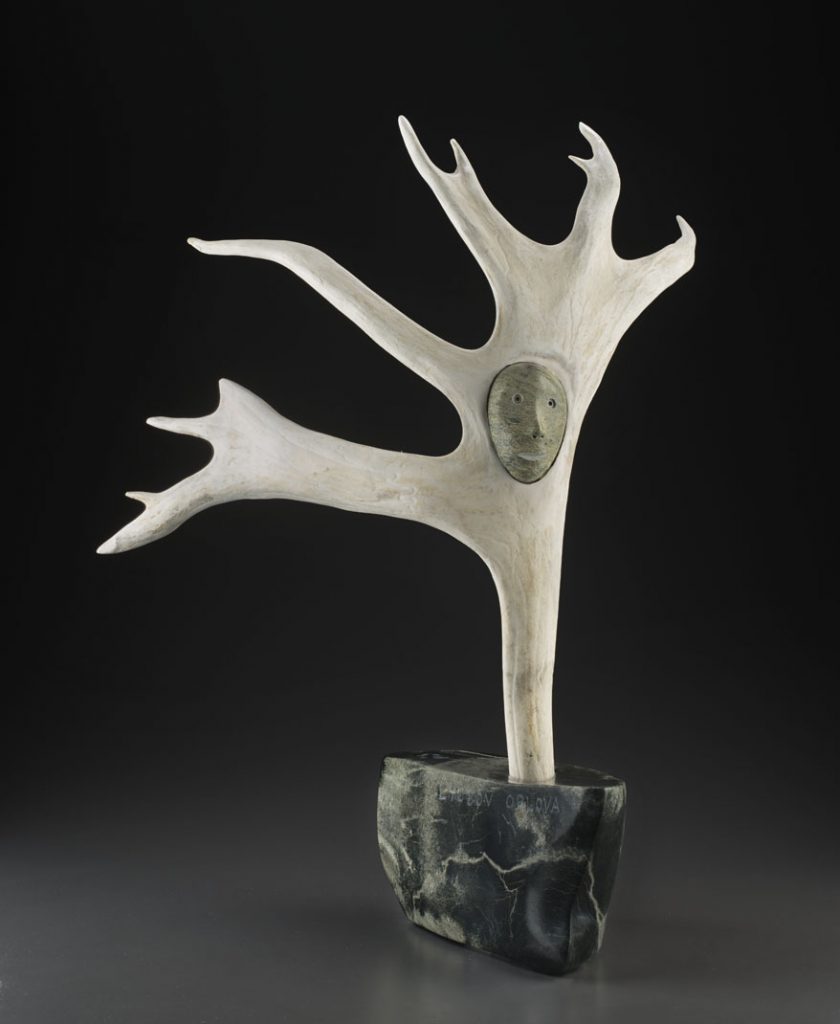 The museum’s collection of Inuit art includes this 2009 work by Mattiusi Iyaituk called “Self-portrait, My Visit to the Cruise Ship, Lyubov Orlova.” The museum is planning an exhibition devoted to Iyaituk’s work. (Photo courtesy of the MMFA)

For the art collector with everything, the $1.5 million COVID mask – TheChronicleHerald.ca 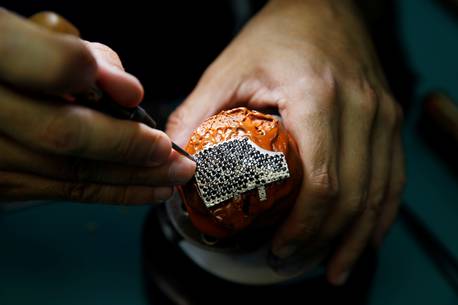 MOTZA, Israel (Reuters) – Art rather than ostentation is the rationale behind the world’s most expensive coronavirus mask, say the Israeli jewellers who are crafting the $1.5 million object for an unnamed U.S.-based client.

Made out of 18 carat gold and studded with 3,600 black and white diamonds, the mask will be fitted with an N99 filter to offer a high level of protection, said Isaac Levy, owner of the Yvel jewellery brand.

He described the client as a Chinese art collector living in the United States.

“He is a young-old customer of ours, very charming, very outgoing, very wealthy and he likes to stand out,” Levy said. The jeweller plans to deliver the mask personally when it is completed, in October.

The mask, which a team of around 25 artisans is working on, might be viewed a vulgar display of wealth during hard economic times, but for Levy it is above all a work of art.

“For a lot of people around the world it may be the most expensive mask in the world and maybe that’s a really big thing,” he said.

“For us, it’s a way to protect the positions of the people in the factory in order for them to be able to support their families.”

After a season without craft markets, it was time for artisans to shine at the Willow Point Summer Market.

Hosted by Crow’s Nest Artist Collective at its new location in Willow Point, the market had more than a dozen vendors.

Their wares covered the gamut: woodworking, clothing, spices, preserves, jewellery, natural products and more. Held over two days, the market was a chance for vendors who hadn’t had the opportunity to attend other outdoor markets this season due to COVID-19 restrictions, a chance to show their wares.

Vendors were spaced in the parking lot and a few were inside the art store with its giant garage door opened.

In-house potter Noella Duncan said visitors were very respectful about keeping their distance from one another and there were multiple hand-sanitizing stations around the market, as well as an outdoor hand-washing station.

“We’ve tried to treat people like adults,” she said. “I find people are doing much less touching and more just looking, which is great.”

The market kicked off Saturday evening and went until dark.

“People were shopping right until we were taking tents down in the evening,” she said.

It started back up again Sunday morning and ran until early afternoon with the hopes of attracting some of the Sea Walk pedestrian traffic.

While there’s no plans to offer any more craft markets this summer, the store is discussing potentially offering a market later on this year, though Duncan said it would have to be inside.

“We’re going to have to do some very strong thinking about it before we do that.”