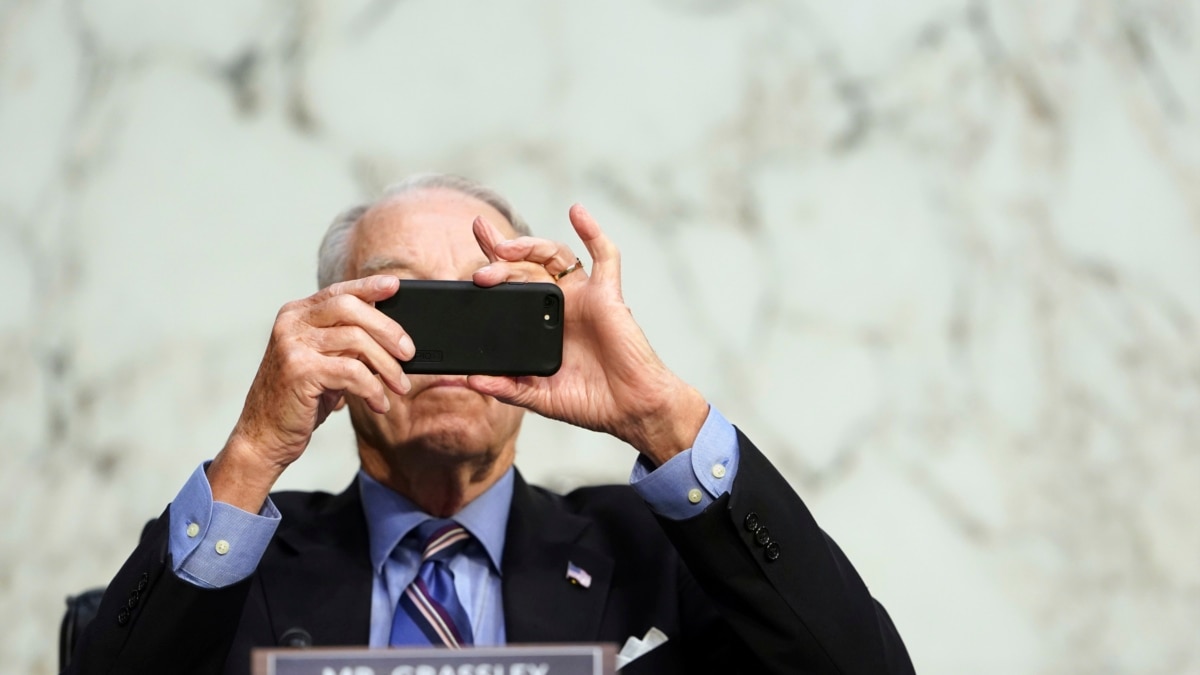 Researchers from the center, based in Riga, Latvia, paid three Russian companies for fake social media engagement. For around $368, researchers got 337,768 fake likes, views and shares of posts on social media, including Facebook, Instagram, Twitter, YouTube and TikTok.

Some of those fake likes, views, and shares appeared on the verified accounts of Senators Chuck Grassley and Chris Murphy. Verified accounts are those that social media companies have confirmed as owned and controlled by the individual or group named on the account.

Grassley’s office confirmed that the Republican from Iowa took part in the study.

Murphy, a Democrat from the state of Connecticut, said in a statement that he agreed to take part in the study. The senator said it is important to understand that even verified accounts are at risk of manipulation. It is easy to use social media as a tool to interfere with election campaigns and incite political unrest, Murphy said.

“It’s clear that social media companies are not doing enough to combat misinformation and paid manipulation…,” he said.

Sarts said that fake accounts are being employed to trick computer programs that decide what information is popular.

“That in turn deepens divisions and thus weakens us as a society,” he explained.

More than 98 percent of the fake engagements – likes, views, shares – remained active after four weeks, researchers found. And 97 percent of the accounts they reported for fake activity were still active five days later.

NATO StratCom did a similar test in 2019 with the accounts of European officials. They found that Twitter is now taking down fake content faster and Facebook has made it harder to create fake accounts.

“We’ve spent years strengthening our detection systems against fake engagement with a focus on stopping the accounts that have the potential to cause the most harm,” a Facebook company spokesperson said in an email.

Researchers said that for the study they pushed content that was not political. They wanted to avoid any possible interference in the U.S. election.

So, the researchers posted pictures of dogs and food.

Ben Scott is executive director of Reset.tech, a group that works to fight digital threats to democracy. Scott said the investigation showed how easy it is to manipulate political communication and how little social media companies have done to fix the problems.

In an email to the Associated Press, Yoel Roth, Twitter’s head of site integrity described the issue is an “evolving challenge.”

Roth added that the study shows the big “effort that Twitter has made to improve the health of the public conversation.”

YouTube said it has put in place safety measures to find fake activity on its site. It noted that more than 2 million videos were removed from the site recently for breaking its policies.

TikTok said it removes content or accounts that support fake engagement or other untrue information that may cause harm.

Erika Kinetz reported on this story for the Associated Press. John Russell adapted it for Learning English. Caty Weaver was the editor.

Words in This Story

fake – adj. not true or real

engagement – n. the act or state of being involved with something

content – n. the ideas, facts, or images that are in a book, article, speech, movie, etc.

detection — n. the act or process of discovering, finding, or noticing something

Jennifer Lopez and Ben Affleck have been pictured exchanging passionate kisses, apparently confirming weeks of fevered rumors that they have rekindled a romance that dominated celebrity media almost 20 years ago.

Paparazzi photos printed in the New York Post on Monday showed the two actors kissing while enjoying a meal with members of Lopez’s family at Malibu’s posh Nobu sushi restaurant west of Los Angeles on Sunday.

Representatives for Lopez, 51, declined to comment on Monday, while Affleck’s publicists did not return a request for comment.

Lopez and “Argo” director Affleck, dubbed “Bennifer,” became the most talked about couple in the celebrity world in the early 2000s in a romance marked by his-and-her luxury cars and a large 6.1-carat pink diamond engagement ring. They abruptly called off their wedding in 2003 and split up a few months later.

The pair have been pictured together several times in Los Angels and Miami in recent weeks, after Lopez and her former baseball player fiance Alex Rodriguez called off their engagement in mid-April after four years together. Monday’s photos were the first in which Lopez and Affleck were seen kissing this time around.

Celebrity outlet E! News quoted an unidentified source last week as saying Lopez was planning to move from Miami to Los Angeles to spend more time with Affleck, 48, and was looking for schools for her 13-year-old twins Max and Emme.

Max and Emme, along with the singer’s sister Lydia, were also photographed walking into the restaurant in Malibu on Sunday.

Lopez married Latin singer Marc Anthony, her third husband, just five months after her 2004 split with Affleck. Affleck went on to marry, and later was divorced from, actress Jennifer Garner.

After noticing a new female voice narrating the videos on the popular video-sharing social networking service, users of TikTok were baffled as to why. It actually turns out that the Canadian actress behind the old voice filed a lawsuit against the platform for copyright violation as her voice was apparently being used without her permission.

Bev Standing, a voice actor based in Ontario, is taking China-based ByteDance to court. TikTok’s parent company has since replaced her voice with a new one, with Standing reportedly finding out over email after a tip-off from a journalist. On the matter, Standing said: “They replaced me with another voice. I am so overwhelmed by this whole thing. I’m stumbling for words because I just don’t know what to say.”

TikTok is said to be considering a settlement for Standing outside of the courts, but nobody knows whether or not this is true. According to legal experts, the fact TikTok now has a new voice on the popular social media app suggests they acknowledge Standing’s case and potentially understand that she may have suffered as a result of the company’s actions.

Thanks to the emergence of the powerful smartphone devices of today, alongside taking high-quality images for Instagram, getting lost down YouTube wormholes, and accessing popular slots like Purple Hot, people are turning to relatively new platforms like TikTok. The service has 689 million monthly active users worldwide and is one of the most downloaded apps in Apple’s iOS App Store. This latest news could harm the platforms future, although many of its younger users potentially aren’t aware that this type of scenario is unfolding.

For Bev Standing, the ordeal is a testing one. She wasn’t informed of the voice change, there is no mention of it in TikTok’s newsroom online, and the development is news to her lawyer also.

This all comes after her case was filed in a New York State court in early May after the voice actor noticed a computer-generated version of her voice had been seen and listened to around the world since 2020. Speculation is rife as to how TikTok managed to obtain the recordings but Standing believes the company acquired them from a project she took part in for the Chinese government in 2018.

The Institute of Acoustics in China reportedly promised her that all of the material she would be recording would be used solely for translation, but they eventually fell into the hands of TikTok and have since been altered and then exposed to a global audience.

According to Pina D’Agostino, an associate professor with Osgoode Hall Law School at York University and an expert in copyright law, the fact that the hugely popular social media platform has now changed Standing’s voice could result in a positive outcome for the distraught voice actor. She said: “It’s a positive step in the way that they are mitigating their damages. And when you’re mitigating, you’re acknowledging that we did something wrong, and you’re trying to make things better.”

When assessing social media etiquette and how both companies and users should act, this type of news can only do more harm than good. Not only does it make the company look bad, but it could have an effect on revenues and, ultimately, TikTok’s reputation.

With a clear desire to move on and put this whole process behind her, Bev Standing is eager for the case to be resolved and get back to the daily work she loves and has been doing for a large part of her life. TikTok has until July 7 to respond to her claim.

Nigeria orders broadcasters not to use Twitter to gather information

Nigerian television and radio stations should not use Twitter to gather information and have to de-activate their accounts, the broadcast authority said following the move to suspend the U.S. social media giant in Africa’s most populous country.

Nigeria’s government on Friday said it had suspended Twitter’s activities, two days after the platform removed a tweet by President Muhammadu Buhari that threatened to punish secessionists. Nigerian telecoms firms have since blocked access to Twitter.

International diplomats responded with a joint statement in support of “free expression and access to information as a pillar of democracy in Nigeria”.

Buhari, who was Nigeria’s military ruler in the 1980s, has previously been accused of cracking down on freedom of expression, though his government has denied such accusations.

Twitter has called its suspension “deeply concerning” and said it would work to restore access for all those in Nigeria who rely on the platform to communicate and connect with the world.

The National Broadcasting Commission, in a statement dated June 6, told broadcasters to “suspend the patronage of Twitter immediately”.

“Broadcasting stations are hereby advised to de-install Twitter handles and desist from using Twitter as a source of information gathering,” it said in the statement, adding that “strict compliance is enjoined”.

The statement comes two days after the attorney general ordered the prosecution of those who break the rules on the ban.

The foreign minister on Monday held a closed door meeting in the capital, Abuja, with diplomats from the United States, Britain, Canada, the European Union and Ireland to discuss the ban.

It followed the statement by their diplomatic missions on Saturday in which they criticised the move.

“These measures inhibit access to information and commerce at precisely the moment when Nigeria needs to foster inclusive dialogue…. as well as share vital information in this time of the COVID-19 pandemic,” they said in their statement.

Nigeria’s information minister on Friday said the ban would be “indefinite” but, in a statement late on Sunday, referred to it as a “temporary suspension”.

The minister did not immediately respond to phone calls and text messages on Monday seeking comment on the altered language.