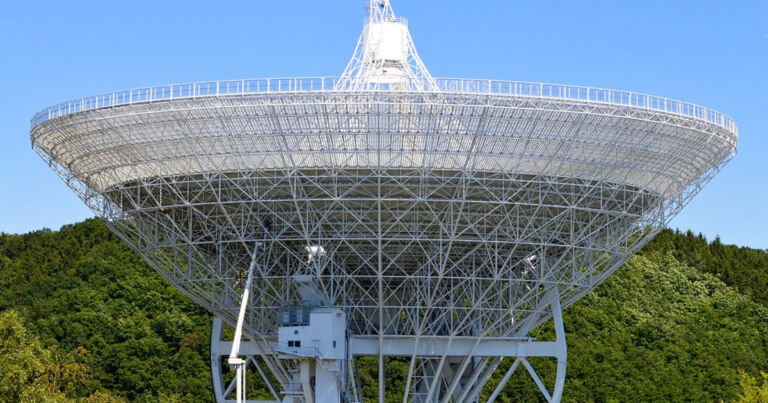 Over the last five years, researchers have been closely following a type of strange radio signal emanating from deep space.

Astronomers refer to these puzzling signals as “fast radio bursts,” or FRBs. They’re pulses of radio waves that only last fractions of a second — and to this day, their origins remain a mystery.

Since the discovery of FRBs, researchers have found that one particular signal, dubbed FRB 121102, was repeating like clockwork, appearing for 90 days before going dormant for the following 67 days.

Astronomers found this roughly 157 day cycle to be repeating over and over again. And that gave them the ability to predict when it would be coming back.

And just as predicted, a team of astronomers led by Marilyn Cruces of the Max Planck Institute for Radio Astronomy detected the FRB 121102 signal again, as detailed in a preprint uploaded to the preprint archive arXiv earlier this month.

The mysterious signal has captured the attention of multiple teams of scientists, as Science Alert reports. A team in China also monitored it using the 500 meter Aperture Spherical radio Telescope at the National Astronomy Observatory of China.

READ MORE: A mysterious radio burst from space is back, right on schedule [CNET]

More on FRBs: A Dead Star Gave Off Something Scientists Have Never Seen Before

There’s a new branch on the tree of life and it’s made up of predators that nibble their prey to death.

These microbial predators fall into two groups, one of which researchers have dubbed “nibblerids” because they, well, nibble chunks off their prey using tooth-like structures. The other group, nebulids, eat their prey whole. And both comprise a new ancient branch on the tree of life called “Provora,” according to a paper published today in Nature.

Like lions, cheetahs, and more familiar predators, these microbes are numerically rare but important to the ecosystem, says senior author Dr. Patrick Keeling, professor in the UBC department of botany. “Imagine if you were an alien and sampled the Serengeti: you would get a lot of plants and maybe a gazelle, but no lions. But lions do matter, even if they are rare. These are lions of the microbial world.”

Using water samples from marine habitats around the world, including the coral reefs of Curaçao, sediment from the Black and Red seas, and water from the northeast Pacific and Arctic oceans, the researchers discovered new microbes. “I noticed that in some water samples there were tiny organisms with two flagella, or tails, that convulsively spun in place or swam very quickly. Thus began my hunt for these microbes,” said first author Dr. Denis Tikhonenkov, senior researcher at the Institute for Biology of Inland Waters of the Russian Academy of Sciences.

Dr. Tikhonenkov, a long-time collaborator of the UBC co-authors, noticed that in samples where these microbes were present, almost all others disappeared after one to two days. They were being eaten. Dr. Tikhonenkov fed the voracious predators with pre-grown peaceful protozoa, cultivating the organisms in order to study their DNA.

“In the taxonomy of living organisms, we often use the gene ’18S rRNA’ to describe genetic difference. For example, humans differ from guinea pigs in this gene by only six nucleotides. We were surprised to find that these predatory microbes differ by 170 to 180 nucleotides in the 18S rRNA gene from every other living thing on Earth. It became clear that we had discovered something completely new and amazing,” Dr. Tikhonenkov said.

On the tree of life, the animal kingdom would be a twig growing from one of the boughs called “domains,” the highest category of life. But sitting under domains, and above kingdoms, are branches of creatures that biologists have taken to calling “supergroups.” About five to seven have been found, with the most recent in 2018 — until now.

Understanding more about these potentially undiscovered branches of life helps us understand the foundations of the living world and just how evolution works.

“Ignoring microbial ecosystems, like we often do, is like having a house that needs repair and just redecorating the kitchen, but ignoring the roof or the foundations,” said Dr. Keeling. “This is an ancient branch of the tree of life that is roughly as diverse as the animal and fungi kingdoms combined, and no one knew it was there.”

The researchers plan to sequence whole genomes of the organisms, as well as build 3D reconstructions of the cells, in order to learn about their molecular organization, structure and eating habits.

Culturing the microbial predators was no mean feat, since they require a mini-ecosystem with their food and their food’s food just to survive in the lab. A difficult process in itself, the cultures were initially grown in Canada and Russia, and both COVID and Russia’s war with Ukraine prevented Russian scientists from visiting the lab in Canada in recent years, slowing down the collaboration.

In recent decades it’s become clear that the universe is teeming with planets and astronomers have begun to catalog them by the hundreds. Most of the worlds we’ve discovered so far are remarkably inhospitable and the closer we look at some, the more hellacious they seem to appear.

Case in point is 55 Cancri e, also known as 55 Cnc or by its nickname, Janssen. This world orbits so close to its star, known as Copernicus or 55 Cnc, that a year on its surface passes in only 18 hours and temperatures can soar over 4,000 degrees Fahrenheit.

Enduring such extreme conditions for so long has led scientists to suggest that the scalding world could have an interior full of diamonds, covered by a surface ocean of molten lava.

There’s a reason that we keep spotting so many relatively hot planets next to their stars. Call it an inherent bias of our existing tech: it’s just easier to see planets orbiting close in to their stars.

In fact, most exoplanets discovered and cataloged so far have a very good chance of being so-called “hot Jupiters” — giant planets orbiting close-in. Being massive and next to your local source of light makes you especially easy to spot.

So 55 Cancri e is actually an important exoplanet as one of the first small, rocky planets found orbiting extremely close to its star.

Now researchers have made use of a new tool called EXPRES (for EXtreme PREcision Spectrometer) at the Lowell Discovery Telescope in Arizona to make ultra-precise measurements that helped them determine the orbit of this hellish world in more detail.

They found that the planet orbits Copernicus right along the equator of the star and that it likely originally orbited further out and was slowly pulled into its current alignment by the gravitational pull of the star and other objects in the unusual star system.

The system is located only 40 light years from Earth and consists of main-sequence star Copernicus paired with a red dwarf star. The binary duo also count at least five exoplanets that all have very different orbits among their cosmic family.

The new research, led by Lily Zhao at Flatiron Institute’s Center for Computational Astrophysics and published in Nature Astronomy, posits that the interactions between these oddball family members shifted Janssen to its current, insufferable orbit.

Although it was pushed, pulled and prodded into its current position, Zhao says that even in its original orbit, the planet “was likely so hot that nothing we’re aware of would be able to survive on the surface.”

What a waste of so much diamond.

On Wednesday (Dec. 7), skywatchers around the world were treated to a celestial show as the full moon eclipsed Mars in the night sky.

The rare event, known as a lunar occultation, refers to one celestial body — in this case, Mars — appearing to disappear or hide behind another — in this case, the moon. This occultation was particularly noteworthy because Mars was at opposition, meaning Earth was directly between it and the sun, making the Red Planet appear particularly bright in the night sky.

Last night’s occultation of Mars by the full moon produced some gorgeous images from observers around the world. The Griffith Observatory in California had a great view of the moon and Mars joining up on Dec. 7 and caught a time-lapse of the Red Planet disappearing behind Earth’s celestial companion as seen in the video above.

In addition, skywatchers around the world have been posting gorgeous images of the lunar occultation of Mars on social media, offering a look at one of the year’s most-watched celestial events.

This is the moment Mars peeked out from behind our moon after being hidden for an hour. This shot was captured using my largest telescope and a special high-speed camera. Seeing another planet rising on the horizon of our moon was such a surreal experience. pic.twitter.com/8IctbVXuUMDecember 8, 2022

Spaceflight photographer John Kraus caught a stunning shot of Mars (opens in new tab) as it appeared behind the moon following occultation:

Amateur astrophotographer Tom Williams produced a gorgeous image of the moon and Mars by combining multiple photographs, and offered an explanation of how he made the image (opens in new tab) on Twitter.

The 2022 Lunar #Occultation of #Mars!This is a crop of a wider image, and shows the red planet on it’s descent behind the eastern lunar limb captured last night from home. Sinus Gomer is central with Syrtis Major at top. See thread for processing. What an event!#astrophotography pic.twitter.com/IBNiW8mA9cDecember 8, 2022

#Mars rising above the lunar limb. This is a stack of 15 frames captured within a 2s interval during the end of the occultation by the #Moon. Captured with a C9.25 Edge HD and ASI678mc. pic.twitter.com/xrDiI3d7keDecember 8, 2022

Astronomer and science communicator Phil Plait caught Mars creeping behind the moon (opens in new tab) just prior to occultation.

The Moon and Mars a few minutes before #occultation. I shot this through my bedroom window using my spotting ‘scope and a phonecam (that’s why there’s a strong Moon reflection to the upper left). Look at the color contrast! The occultation was cool, taki… https://t.co/lpxYVpmbmi pic.twitter.com/SUISrvttx7December 8, 2022

The lunar occultation of Mars by the full Cold Moon was particularly noteworthy because the Red Planet only appears at opposition every 26 months, so the next opposition won’t occur until January 2025.

Mars was also especially close to Earth during this event, which occurred while the planet was at perigee, or its closest point to Earth in its orbit. The record for closest approach between Mars and Earth was set in 2003 at just 34.8 million miles (56 million kilometers); according to NASA, Mars and Earth won’t be this close for another 265 years, until 2287.

Editor’s Note: If you snap a great photo of either Mars at opposition or the lunar occultation and would like to share it with Space.com’s readers, send your photo(s), comments, and your name and location to spacephotos@space.com.