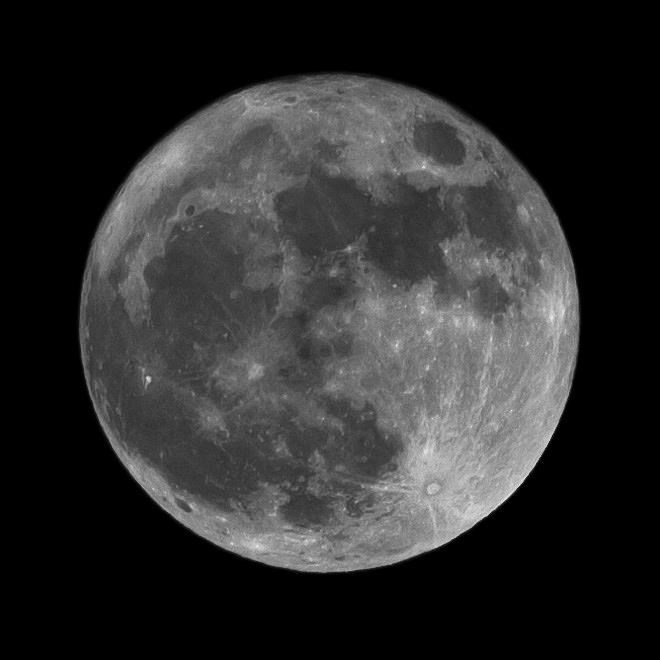 The current drought for planetary observing continues with everything but Mars either too close to the sun or the horizon. So, this month’s topic will be some esoteric facts about our moon.

The current prevailing theory of the moon’s origin is that early Earth was struck by a Mars-sized body about half the diameter of the proto-Earth and about one-tenth its mass.  A glancing blow would likely leave a debris field in orbit around Earth, which would have accreted to form what is now our satellite. This hypothesis would help explain the 23-1/2 degree tilt of Earth’s axis and our resultant seasons.

The ratio of oxygen isotopes in lunar samples is essentially identical to terrestrial rocks, which suggests the moon formed from Earth’s post-impact debris field.

Although the moon is now about 385,000 km (240,000 miles) from Earth, it formed much closer to Earth and slowly moved farther away. This was due to the tidal interactions between Earth and moon, which cause both to bulge towards the other.  While the ocean clearly rises and falls depending on the moon’s location, Earth itself does too, although to a lesser extent. Earth’s rotation tends to carry this bulge with it, with the result that the bulge, being slightly closer to the moon, adds a slight forward component to the attraction of Earth’s gravity. This slightly pulls the moon in the same direction as Earth’s rotation, slowly pulling the moon into a higher orbit while at the same time slightly slowing down the Earth’s rotation – a transfer of angular momentum from Earth to moon.

The moon’s orbital radius is increasing by about 38 mm (about an inch and a half) per year, meaning that when Neil and Buzz walked around up there the moon was about their average height closer to the Earth.

The same thing happened to the moon: whatever rotation it had was slowed by the force of Earth’s gravity on its tidal bulge, so that it is now tidally locked to Earth and its rotational period equals its orbital period.

Eventually, Earth’s rotation will slow until it, too, is locked to the moon’s orbital period.  At this point, Earth will still be rotating faster than it orbits the sun and the smaller tidal bulge due to the sun’s gravity will continue to slow Earth’s rotation.

Earth’s tidal bulge will then begin to lag the moon’s orbital motion, the pull will be acting in reverse and the moon will slowly start to spiral back towards the Earth.

The moon will move ever closer until it reaches 18,470 km (11,470 miles) above the Earth, a point known as the Roche limit. This is the radius inside which the tidal forces pulling objects apart exceed their mutual attraction due to gravity.

Ultimately, our moon will begin to fragment and we’ll have a ring like Saturn.

This forecast of Earth – moon orbital interactions was a couple of lectures in a fascinating Astrophysics course I took about 50 years ago. I can’t remember whether this would occur before or after the Sun turns into a red giant and fries us in about five billion years from now but I think I’m safe in saying that at my age I don’t have to worry about it.

The Royal Astronomical Society of Canada at: www.rasc.ca has a number of observing programs, among them “Explore the Moon,” one for telescope use and another for binoculars: www.rasc.ca/sites/default/files/EtM_Binoculars_V1.pdf  Either is highly recommended.

At 7:00 p.m. on April 10, 2021, the Sunshine Coast branch will hold its monthly Zoom meeting online to present Dr. Janok P. Bhattacharya, Susan Cunningham Research Chair in Geology at the School of Earth, Environment and Society (SEES), McMaster University, Hamilton, ON, whose topic will be The Origin of Life and Martian Possibilities. Details are available at: sunshinecoastastronomy.wordpress.com

NASA’s Europa Clipper will start its journey to Jupiter’s icy moon aboard a Falcon Heavy rocket built by SpaceX. NASA will pay SpaceX $178 million to launch the vehicle in October 2024.

The Europa Clipper got the green light from NASA in 2015. It will fly by the moon 45 times, providing researchers with a tantalizing look at the icy world, believed to have an ocean lurking under its icy crust. The Clipper is equipped with instruments that will help scientists figure out if the moon could support life.

For years, the Clipper was legally obligated to launch on NASA’s long-delayed Space Launch System (SLS). But with the SLS perpetually delayed and over budget, NASA has urged Congress to consider allowing the Europa Clipper to fly commercial. Switching to another vehicle could save up to $1 billion, NASA’s inspector general said in 2019.

The SLS has powerful allies in Congress, who have kept the costly program alive for years, even as it blew past budgets and deadlines. The first flight of the SLS was originally supposed to happen in 2017. That mission — launching an uncrewed trip around the Moon — has since been pushed to November 2021, and keeping to that new schedule remains “highly unlikely” according to NASA’s Office of Inspector General, a watchdog agency.

SpaceX first launched its Falcon Heavy rocket in 2018, and started flying satellites in 2019. Earlier this year, NASA selected the rocket as the ride to space for two parts of a planned space station orbiting the Moon.

Jared Decker, a fourth-generation cattle farmer, has been aware of cattle suffering from health and productivity problems when they are moved from one location to another. The shift is from a region where they had spent generations to another place with a different climate, grass, or elevation.

Decker, as a researcher at the University of Missouri, looks at the chances of using science to resolve this issue, thereby serving a dual purpose to enhance the cattle’s welfare and sealing the leak in an almost $50 billion industry in the United States.

When I joined MU in 2013, I moved cattle from a family farm in New Mexico to my farm here in Missouri. New Mexico is hot and dry, and Missouri is also hot but has much more humidity. The cattle certainly didn’t do as well as they did in New Mexico, and that spurred me to think about how we could give farmers more information about what their animals need to thrive.

The study was published in the journal PLOS Genetics on July 23rd, 2021.

Decker and his research team have revealed the proof exposing the fact that cattle are losing their key environmental adaptations. The researchers regard this as a loss due to the lack of genetic information available to farmers.

After assessing the genetic materials dating back to the 1960s, the team determined particular DNA variations linked with adaptations that could someday be used to develop DNA tests for cattle. These tests could help educate the farmers regarding the adaptability of cattle from one environment or another.

We can see that, for example, historically cows in Colorado are likely to have adaptations that ease the stress on their hearts at high altitudes. But if you bring in bulls or semen from a different environment, the frequency of those beneficial adaptations is going to decrease. Over generations, that cow herd will lose advantages that would have been very useful to a farmer in Colorado.

The research team included then-doctoral student Troy Rowan who had examined 60 years’ worth of bovine DNA data from tests of cryo-preserved semen produced by cattle breed associations. They observed that, as time runs, the genes related to higher fertility and productivity increased as a result of careful selection by farmers. Also, many genes relating to environmental adaptations have decreased.

According to Decker, the farmers are not to be blamed as there are no affordable methods available at present to identify the suitability of cattle for a specific environment. The study also proposes easy-to-use cattle DNA tests that focus on the particular adaptations identified in the study.

Such adaptations include resistance to vasoconstriction, which is a process of blood vessel narrowing that takes place at high elevation and puts excessive stress on the heart. Also creating resistance to the toxin in the grass can result in vasoconstriction and tolerance for increased temperature or humidity. All these factors tend to decline over generations when the cattle are shifted from the associated surroundings.

Sometimes, natural and artificial selection are moving in the same direction, and other times there is a tug of war between them. Efficiency and productivity have vastly improved in the last 60 years, but environmental stressors are never going to go away. Farmers need to know more about the genetic makeup of their herd, not only for the short-term success of their farm, but for the success of future generations.

The first widely adopted genetic test for cattle was developed at the University of Missouri in 2007. Decker and Rowan are looking forward to giving further details of the development. Both the researchers grew up on farms with a desire to use research to help farmers to balance farm traditions of America with the requirement for eco-friendly business practices.

“As a society, we must produce food more sustainably and be good environmental stewards. Making sure a cow’s genetics match their environment makes life better for cattle and helps farmers run efficient and productive operations. It’s a win-win,” concluded Decker.

Canada could avoid the worst of a 4th wave — but we're not out of the woods yet – CBC.ca