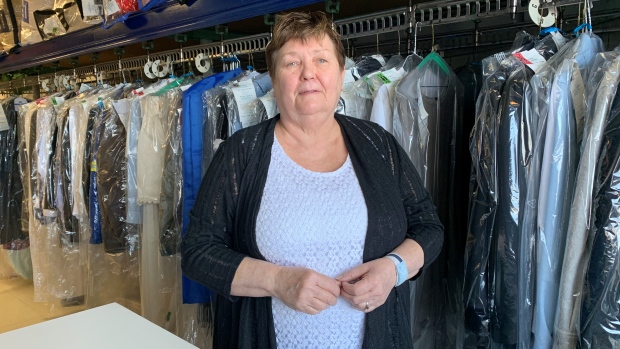 SASKATOON —
Margaret Reddekopp who runs the Clean Shoppe in Saskatoon, a family-owned dry cleaning business that’s been around for 25 years, said she was she was forced to lay off most of her staff when the COVID-19 pandemic first hit.

She said she has only been able to hire a few back to work part-time.

“There’s not enough work to go around and we can’t pay somebody if it’s not coming in, so we’re doing everything ourselves,” Reddekopp told CTV News.

She said that’s because most people are still working from home and events like weddings, graduations and funerals have been cancelled or postponed.

Other businesses are also being forced into tough decisions.

A recent Statistics Canada report shows Saskatchewan’s unemployment rate for 2020 was 8.4 per cent – the highest since 1976, and a massive increase over the 2019 rate of 5.6 per cent.

The 2020 rate is even higher than in the mid-1980s and early 90s when Saskatchewan saw unemployment rates in the 7 to 8 per cent range.

“In the 60s when I started working, that was about where it was at. It was hard to get a job and we’re back to that,” Reddekopp said.

In a news release, the Saskatchewan government said employment in the province increased slightly in January 2021.

The unemployment rate fell to 7.2 per cent – the lowest among the provinces and well below the national average of 9.4 per cent, the province said in a release.

In a tweet, Premier Scott Moe calls it “great news.”

Our province recorded the lowest unemployment rate in Canada at 7.2 per cent – well below the national rate of 9.4%.

In addition, Saskatchewan led the country in export growth in 2020, with a value of over $30 billion. pic.twitter.com/foFBwIU2CC

He said Saskatchewan led the country in export growth in 2020 with a value of over $30 billion.

He also said the province has 76 per cent of small businesses fully operational, exceeding the national average of 47 per cent.

“I think that the spin that we’re hearing about it being better, that our numbers are in good shape is a little deceiving because I think we’ve lost thousands and thousands of jobs in our job market, in our province since the beginning of the pandemic,” she said.

Johb said the hospitality, service and events sectors have taken the largest hit. She adds that women have also been disproportionately impacted and worried that some jobs may never come back even after the pandemic ends.

Meanwhile, Reddekopp said she plans on hiring back all the staff she had to lay off when business picks back up and it is safe to do so.

“They really need to come back to work because how long can you survive on unemployment? Like really,” she said.

“They’re waiting at home, waiting for me to phone.”

Matthews practices with Maple Leafs, 'not ruled out' against Oilers – NHL.com