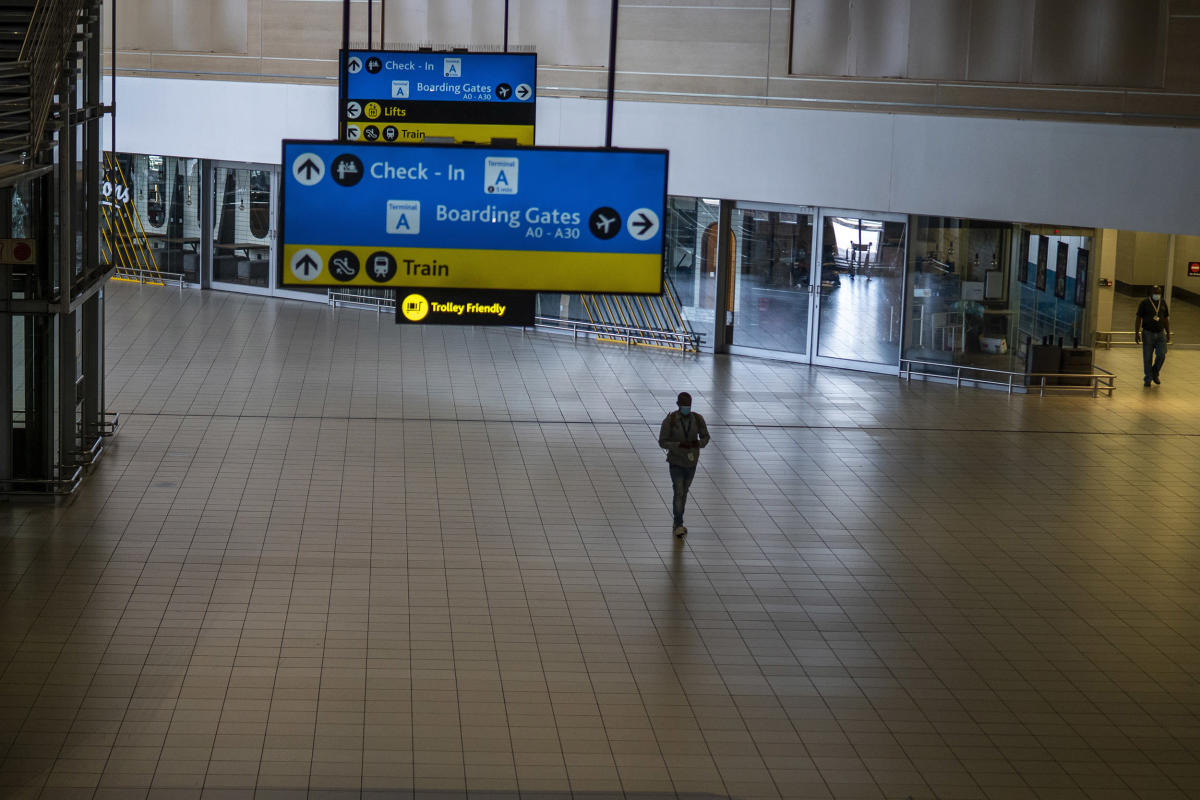 When Jeremy Kamil got his first look at B.1.1.529, the coronavirus variant that would soon be named omicron, it didn’t take long to see the differences.

More than 30 mutations made the variant’s spike proteins, which cover the outside of the virus and are the main targets of vaccines and the body’s immune responses, different from those of the virus that first emerged in late 2019.

The World Health Organization has identified and tracked more than 20 variants. Yet unlike with others that popped up around the world before they mostly fizzled out (including the lambda variant, which was first documented in December in Peru, or the mu variant, which was detected a month later in Colombia), there were early signs that the omicron variant’s cocktail of mutations made it different and worthy of swift action — even overreaction — experts say.

While it’s too soon to know what the mutations mean for the effectiveness of vaccines or how sick people could become from the variant, the emergence of the omicron strain also highlights the frustrating reality of the Covid pandemic: Variants will continue to pose serious threats until countries around the world have more equal and ready access to vaccines, experts say.

“It’s definitely sobering,” Kamil said. “It’s an exaggeration to say we’re back at square one, but this is not a good development.”

It was the kind of quick and intense development reminiscent of early stages of the pandemic, prompting some concern that governments were overreacting before enough about the omicron variant was known.

But even before it was given the “omicron” designation, the variant quickly gained attention among Covid researchers.

South Africa was the first to report clusters of cases involving the omicron variant last week. Days before, data about the newly identified variant had also been uploaded to GISAID, an online database for disease variants, by a research team in Hong Kong, followed by more early sequences from scientists in Botswana.

The number of mutations observed with the omicron variant hasn’t previously been seen with other strains, Adalja said. There are concerns that specific mutations to the spike protein could make the omicron variant less vulnerable to the so-called neutralizing antibodies generated by vaccines or natural immunity from previous Covid-19 infections.

“There’s a very good chance this variant will be very resistant to neutralizing antibodies, but we can’t yet say with any degree of certainty how resistant,” said Theodora Hatziioannou, a virologist at Rockefeller University in New York City.

Researchers have been preparing for this possibility.

In lab experiments with a virus that was genetically altered so it didn’t pose a threat to humans, Hatziioannou and her colleagues produced myriad combinations of spike protein mutations and tested how well they were able to evade Covid-19 antibodies.

One of their more worrisome outcomes was observed in a lab-produced spike protein that carried 20 mutations — more than had been observed in any other known variant at the time but fewer than in the omicron variant. It was largely resistant to neutralizing antibodies from both vaccines and natural immunity.

More research is needed to understand how the omicron variant behaves in real-world settings, but Hatziioannou said many of the variant’s mutations correspond to the types of changes she and her colleagues studied in the lab.

“Nature essentially reproduced our experiment, only at a much larger scale,” she said.

Scientists around the world are racing to characterize the omicron variant, focusing in particular on whether it is more contagious, causes more severe disease or can evade the protection of vaccines. Those open questions may awaken anxieties from early in the pandemic, but Carl Bergstrom, a professor of biology at the University of Washington, said drug therapies and the vaccines still offer crucial advantages.

“We have a whole bunch of tools now that we didn’t have before,” he said. “But it’s disappointing, for sure. There was kind of this general feeling that we’re coming off this delta wave, we’re triple-boosted, and it could almost be like 2019 again.”

Adalja said the emergence of the omicron variant should spur people to get vaccinated or to get booster shots. Countries should also increase testing for Covid-19 to track where — and how quickly — the variant is spreading.

Since omicron was designated a “variant of concern,” more than 40 countries have banned travel from southern Africa.

Hatziioannou said such sweeping measures, which may have been a “knee jerk reaction” to the most recent devastating wave of delta infections, are largely ineffective.

“The variant is likely already here,” she said. “Closing the barn door after the horses have bolted is useless.”

“When you have a virus like this, it almost invariably is ultimately going to go essentially all over,” he said Saturday on NBC’s “Weekend TODAY.”

President Joe Biden, who said Monday that people should get fully vaccinated or get booster shots, tried to allay fears about the threat of the new strain.

Kamil similarly said it’s too early to know what impact the omicron variant may have in the U.S. and around the world. He added, however, that it underscores the importance of vaccine equity and the need for wealthy countries to help provide that access.

“A booster shot in America has a far smaller effect of preventing variants than the first dose that someone gets in Chad or Benin or Togo,” he said. “If we do not protect other nations, we are all going to sink together.”

A convoy of truckers started their march from Vancouver on Sunday to the Canadian capital city of Ottawa protesting the government’s COVID-19 vaccine mandate for truckers, which the industry says would create driver shortages and fuel inflation.

Truckers under the banner Freedom Convoy 2022 had raised C$2.7 million ($2.2 million) by Sunday through a gofundme campaign to fight the mandate. The funds raised would be used to help with the costs of fuel, food and lodgings, the gofundme page said. The convoy is expected to reach Ottawa on Jan. 29.

The trucking industry is vital to ensure smooth flow of goods since more than two-thirds of the C$650 billion ($521 billion) in goods traded annually between Canada and the United States travels on roads.

But as many as 32,000, or 20%, of the 160,000 Canadian and American cross-border truck drivers may be taken off the roads due to the mandate https://www.reuters.com/business/canada-us-supply-chain-still-could-face-disruptions-due-vaccine-mandates-2022-01-13, the Canadian Trucking Alliance (CTA) estimates.

The CTA, however, said in a statement on Saturday it does not support any protests on public road ways and the only way to cross the border on a commercial truck is by getting vaccinated.

Canada imposed the vaccine mandate for the trucking industry from Jan. 15, under which unvaccinated Canadian truckers re-entering Canada from the United States must get tested for COVID-19 and quarantine themselves.

Prime Minister Justin Trudeau has resisted industry pressure to delay the mandate since it was first announced in November.

P.E.I. has announced announced another death related to COVID-19, raising the province’s total to six.

The person was over age 80, according to a release from the Chief Public Health Office on Sunday. No further details were released about the death.

The number of people hospitalized for COVID-19 increased to nine as of early Sunday. One person is in intensive care.

Four other people in hospital for other reasons have also tested positive for the virus.

The province has declared a new outbreak at the Summerset Manor long-term care facility in Summerside.

There are 209 new cases and 214 recoveries in Sunday’s update. On average, 279 cases per day have been reported over the last week.

Hundreds of vaccination appointments are still available this week, according to the release, including dedicated appointments for children.

In a news release Sunday, public health reported there are a total of 126 people hospitalized with COVID-19 in the province. Ten people are currently in intensive care.

Of those currently hospitalized, 74 were admitted for reasons other than COVID-19.

Of those in hospital, 101 are 60 or over, and six people are on a ventilator. Public health said Sunday that three people 19 and under are currently hospitalized.

The province said the rate of people hospitalized and in ICU continues to most greatly impact people who are unvaccinated and those who are over six months from their second dose.

Officials are urging parents and guardians to book a COVID-19 vaccine appointment for their child’s first or second dose if they have not yet done so.

Children aged five to 11 who have already received their first dose of the vaccine are eligible to receive their second dose once eight weeks have passed since their first dose.

“Children are expected to return to in-person school by the end of the month and will benefit greatly from vaccination,” said Dr. Jennifer Russell, chief medical officer of health in a news release Sunday.

The New Brunswick government is encouraging those eligible for a booster dose of a COVID-19 vaccine to book their appointment to help slow the spread of the virus.

Booster doses are available to everyone 18 and older, as long as five months have passed since their second dose.

To date, 62.3 per cent of the eligible population of people 50 and older have received their booster dose.

Appointments can be booked online at vaccination clinics offered through the Vitalité and Horizon health networks.

Many pharmacies across the province are also offering vaccine clinics. Appointments can be made by contacting a participating pharmacy directly.

Those unable to book an appointment online, or who otherwise need assistance booking through a health authority clinic or pharmacy, may call 1-833-437-1424.

Since Jan. 10, more than 44,000 appointments have been booked for booster doses of an mRNA vaccine.

New Brunswick is currently in Level 3 phase of the winter plan to manage COVID-19.

Premier Blaine Higgs said Friday that vaccinating more children against COVID-19 and ensuring more adults receive their booster dose over the next week will help New Brunswick return to Level 2 of the winter plan on Jan. 30 at 11:59 p.m.