There were three deaths related to COVID-19 reported on Friday in Saskatchewan.

There were two deaths reported in the 70 to 79 age group, one in Regina and one in South Central, the other death was reported in the 50 to 59 age group in the Saskatoon zone. The number of deaths related to COVID-19 in the province is currently 401.

There were 176 new cases of COVID-19 reported in the province on Friday.

North Central 2, which is Prince Albert, has 40 active cases.

The recovered number now sits at 28,528 after 131 more recoveries were reported.

There were 2,692 doses of COVID-19 vaccine administered yesterday in Saskatchewan bringing the total number of vaccines administered in the province to 98,571.

Province finds community transmission of variants of concern in Regina

The province is highlighting increasing transmission of COVID-19 variants of concern.

Most of the variants are the UK strain. Only six are the South African strain. It’s been previously reported that five of those six were in the North Central zone.

The province is recommending that people over the age of 50 remain with their household and not increase their bubble to include two to three other households.

They’re also being asked to limit travel and hopping to essential trips only and stay home with even the mildest of symptoms or if they’ve been in contact with anyone with mild symptoms.

“Saskatchewan Health Authority is implementing increased testing and contact tracing and case management,” they said in a press release.

The variants of concern have been shown to be more transmissible than the original COVID-19 strain. Vaccines are also less effective against some of the variants, though vaccines still enjoy solid efficacy rates against the UK variant.

Vaccine eligibility options will be expanded again tomorrow, Saturday March 13 at 8 a.m., to include individuals 76 years of age and older.

Why Canada's confusing COVID-19 vaccine guidelines could be leaving seniors at risk – CBC.ca

OTTAWA (Reuters) – The COVID-19 pandemic and its damaging impact on women has underlined the need for a national childcare plan, which would also help the economic recovery, Finance Minister Chrystia Freeland said on Thursday.

Since taking up her job in August, Freeland has repeatedly spoken about a “feminist agenda,” and has said childcare will be part of a stimulus package worth up to C$100 billion ($79.6 billion) over three years. She will unveil details in her April 19 budget.

“I really believe COVID-19 has created a window of political opportunity and maybe an epiphany … on the importance of early learning and childcare,” Freeland told a online convention of Canada‘s ruling Liberal Party.

The budget is set to be a springboard for an election that Liberal insiders say is likely in the second half of the year.

Canadian governments of various stripes have mused about a national childcare program for decades but never acted, thanks in part to the cost and also the need to negotiate with the 10 provinces, which deliver many social programs.

Freeland said a childcare program would help counter “an incredibly dangerous drop” in female employment since the start of the pandemic.

“It is a surefire way to drive jobs and economic growth … you have higher participation of women in the labor force,” Freeland said. “My hope … is that being able to make that economic argument as well is going be to one of the ways that we get this done.”

Freeland, who is taking part this week in meetings of the Group of Seven leading industrialized nations and the International Monetary Fund, said U.S. Vice President Kamala Harris and Treasury Secretary Janet Yellen had told her they saw early learning and child care as a driver for economic recovery.

To check and see if you are eligible to receive a COVID-19 vaccine in Ottawa, click here.

The COVID-19 screening tool for students heading back to in-person classes can be found here.

Ottawa’s top doctor warns it’s “more likely than not” that all elementary and secondary schools in Ottawa will be closed for in-person learning after the April break.

“I am now thinking the probability that schools will close to in-person learning after the spring break is higher than the probability the COVID-19 situation will improve in time to keep schools open,” said Dr. Vera Etches, Ottawa’s medical officer of health.

“My heart is heavy because I know how important schools are to the health of our community.”

Etches says Ottawa Public Health will make a decision by next Wednesday on whether schools will reopen or close after the April Break.

Ottawa Public Health reported 242 new cases of COVID-19 in Ottawa on Friday, the highest one-day case count in the capital during the COVID-19 pandemic.

The surging numbers prompted the city’s medical officer of health to issue a rallying cry to Ottawa residents, saying the city has reached a key point in the COVID-19 “marathon.”

“We are tired. We’re fatigued. We want this to be over. And this is the point in our COVID marathon where we’re hitting the wall,” Dr. Vera Etches told reporters Friday. “This is our defining moment. It’s a moment where we’ve got to break through that wall.”

Residents aged 50 and over in three hot spot postal code areas in Ottawa can now book an appointment to receive a COVID-19 vaccine, but the city warns it doesn’t have enough vaccine supply to vaccinate everyone.

On Friday, Ontario opened vaccine appointments at community clinics to residents born in 1971 or earlier who live in certain “hot spots.” In Ottawa, the hot spots have been identified as postal codes K1T, K1V, K2V.

A memo from Dr. Vera Etches and Ottawa’s general manager of emergency and protective services Anthony Di Monte said residents 50 years of age and older living in the provincially identified “hot spots” of K1T, K1V and K2V are eligible for vaccine appointments at community clinics.

Residents living in the high-priority neighbourhoods of Emerald Woods – Sawmill Creek and Greenboro East and Ledbury – Heron Gate and Ridgemont will have the option to book at either a community clinic or at a pop-up clinic. 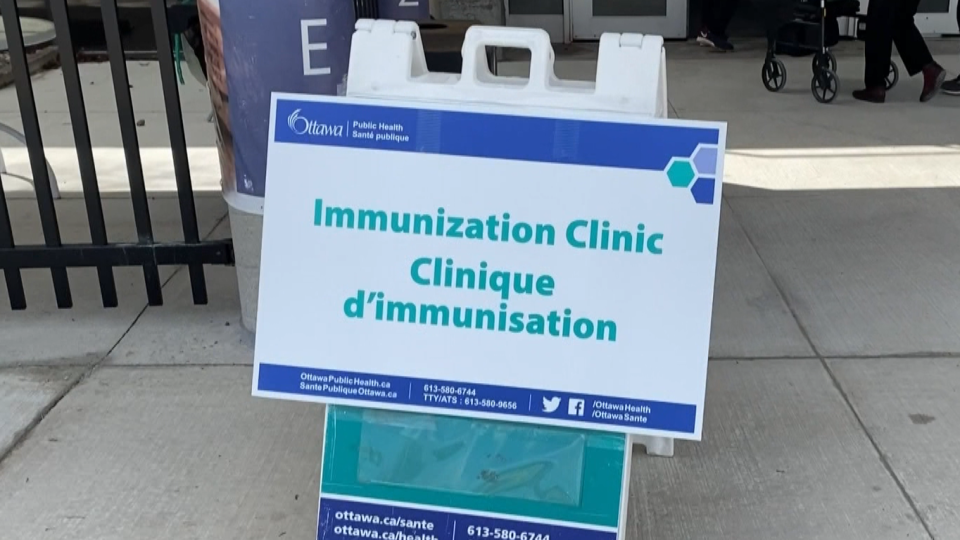 One day after a COVID-19 outbreak was declared in Kingston’s University District, the city is closing the popular Breakwater Park until the end of the university school year to prevent large gatherings.

Mayor Bryan Paterson has issued an emergency order to close Breakwater Park for the next 10 days.

“This timeline coincides with students move-out, but can be extended if needed. As one of our most popular community parks, closing it is a last resort,” said Paterson in a statement

“Yesterday, however, we saw troubling instances of overcrowding, which is especially concerning given the current outbreak in the nearby University District.”

Pictures on social media showed dozens of people in the popular park along the waterfront on Thursday.  During the provincewide shutdown, outdoor gatherings are limited to a maximum of five people. 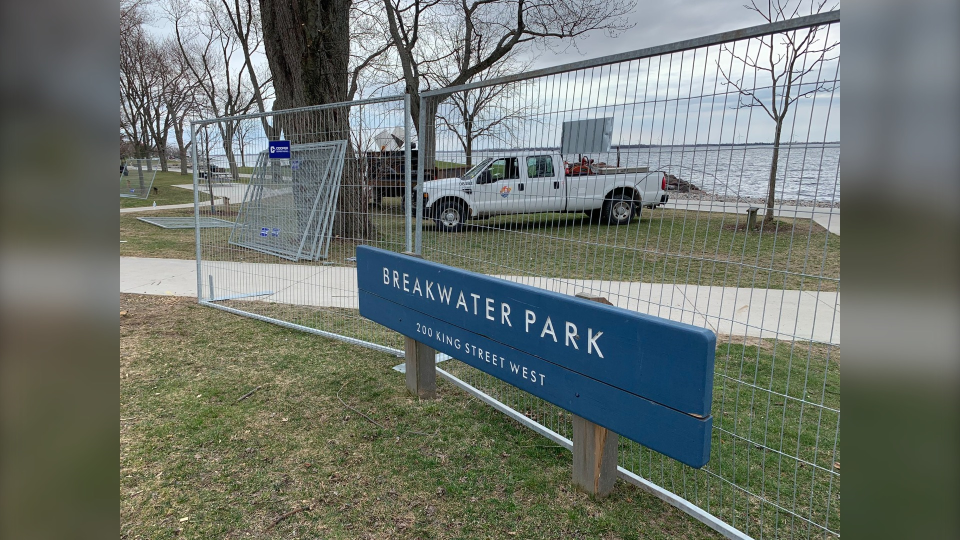 Average age of Quebec COVID-19 patients has dropped by 10 to 15 years, doctors say

Harry Miller
MONTREAL — Over the past two to three weeks, Dr. Francois Marquis, head of intensive care at Montreal’s Maisonneuve-Rosemont hospital, says he started noticing the average age of COVID-19 patients dropping.People arriving at the hospital are on average, about 10 to 15 years younger than earlier patients in need of medical care after contracting COVID-19, he said in an interview Wednesday.

“We are starting to see what was very unlikely during the first wave: 30 or 40-year-olds without any previous medical history, people in good health,” Marquis said.

“Many of them deteriorate quite quickly and have to be admitted to the ICU,” she said.

Dr. Gaston De Serres, an epidemiologist with Quebec’s public health institute, said the proportion of Quebecers over 80 in hospital with COVID-19 has been declining since mid-March — largely due to vaccination.

He said it’s not just the proportion of hospital patients who are younger that’s increasing, the overall number of younger patients is rising as well. De Serres said there were 40 people between 50 and 59 years old who were hospitalized the week of March 7. During the week of March 28, there were 54.But hospitalizations are still not rising significantly among people under 30. “It’s younger,” he said of the average age of patients. “It’s not young.”

Ten people between 20 and 29 years old were hospitalized with COVID-19 in Quebec the week of March 28, up from five two weeks earlier, De Serres said.

“If you have more cases, you will clearly have more hospitalizations, but the proportion of all hospitalized cases will remain small because these younger age groups are very low risk of being hospitalized.”

De Serres said he thinks more younger people are getting sick because the coronavirus variants of concern are more transmissible and they lead to more severe illness more frequently.

Mike Benigeri, director of the data bureau at the Institut national d’excellence en sante et services sociaux, a Quebec government health-care research institute, said that over the past two weeks, there has been a 40 per cent increase in the number of people aged 40 to 69 who have been infected with COVID-19. He said the percentage is even higher among people aged 18 to 30.

Marquis said older people and those with other medical conditions may notice a COVID-19 infection sooner. People who are healthier may not seek medical attention until they’re very ill, he added.

“They will push the limits of endurance up to the point when they say, OK, it’s enough, I really need to go to the hospital,” he said.

Despite the odds of dying being low among younger people, that doesn’t mean the consequences among the small group who do get severely ill are any smaller, he said.

Quebec Premier Francois Legault has repeatedly said that with vaccination protecting older people, the province will be able to tolerate more COVID-19 cases.

Dr. Quoc Nguyen, a gerontologist at the Universite de Montreal hospital centre, said while that may be true when it comes to deaths, it may not be the case for ICU capacity.

“When we look at one case in December versus one case in March, it seems that for a single case we have more intensive care than we used to before, but we don’t necessarily have more hospitalization,” he said.

It’s ICU capacity that worries Marquis. His ICU is supposed to have 24 beds, but because staff members have left the health-care system — particularly nurses — it now has a capacity of 14: seven beds dedicated to COVID-19 patients and seven for everyone else.

“I am really afraid that in two weeks we’re going to be in the same place as Ontario is right now and I don’t think that we can deal with that many patients,” he said.

Ontario Premier Doug Ford has imposed a four-week stay-at-home order after a third wave of COVID-19 started to overwhelm the health system.

This report by The Canadian Press was first published April 8, 2021.