Look out for an Andy Warhol retrospective, Elias Sime at the ROM, Contact Photo Fest’s 25th anniversary and more

© 2020 The Andy Warhol Foundation for the Visual Arts, Inc. / Licensed by SOCAN.

Toronto art galleries are hesitantly stepping into the new year.

2020 brought many ups and down for Toronto art gallerists, art lovers and artists. Due prohibitive lockdowns and reduced capacity when things were permitted to reopen, COVID-19 threw a colossal wrench into the Toronto art scene.

Of course, there were highlights, as the arts resiliently adapted to the new measures. But, things didn’t really feel the same.

The shows we are anticipating for 2021 are big and larger than life odes to Studio 54, an Andy Warhol retrospective announced early last year, the city’s year-long programming devoted to public art and more.

We will update this story as more exhibitions are announced. 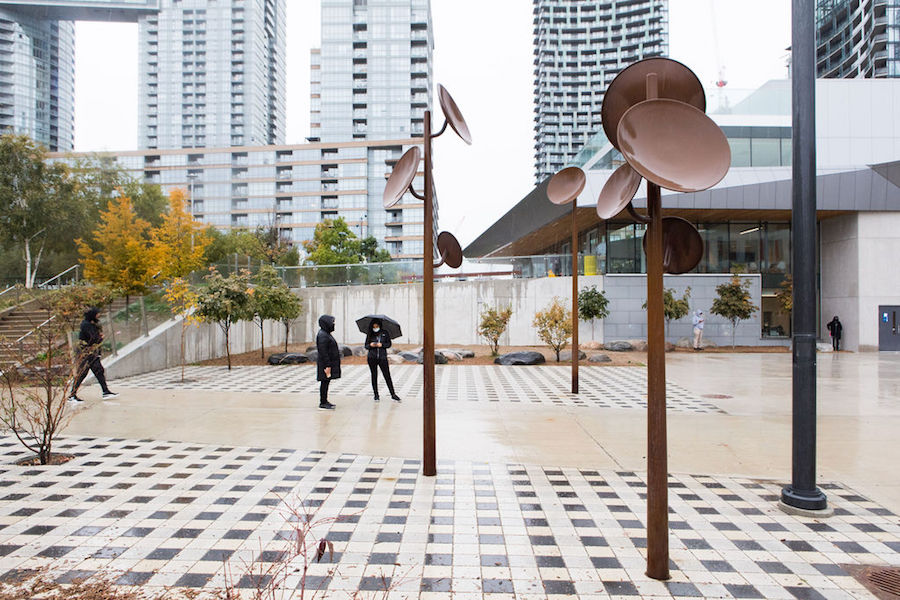 Toronto will shine a well-timed spotlight on public art in 2021. Pictured: Listening Ears by Georgia Dickie.

How fitting is it that 2021 is the city’s Year of Public Art. As we deal with the after effects of this year and the vaccine rolls out, outdoor art will still remain de rigeur. This program kicks off the city’s 10-year public art strategy. One important aspect of the project is that it has a commitment to advance “reconciliation in Toronto through Indigenous place-making,” specifically acknowledging the Indigenous history, present and future of the land public artworks are on.

Something you may have missed in mid-December was Toronto History Museums’ new program Awakenings. Set to continue in 2021, it’s a series of video works accessible on the city’s website. The virtual art series is entirely by Black, Indigenous and artists of colour. In one program called We Were Always Here, Director X (aka Julien Christian Lutz) mentors 10 filmmakers, each tasked with connecting the current space of one of Toronto’s 10 history museums, with its historical past. 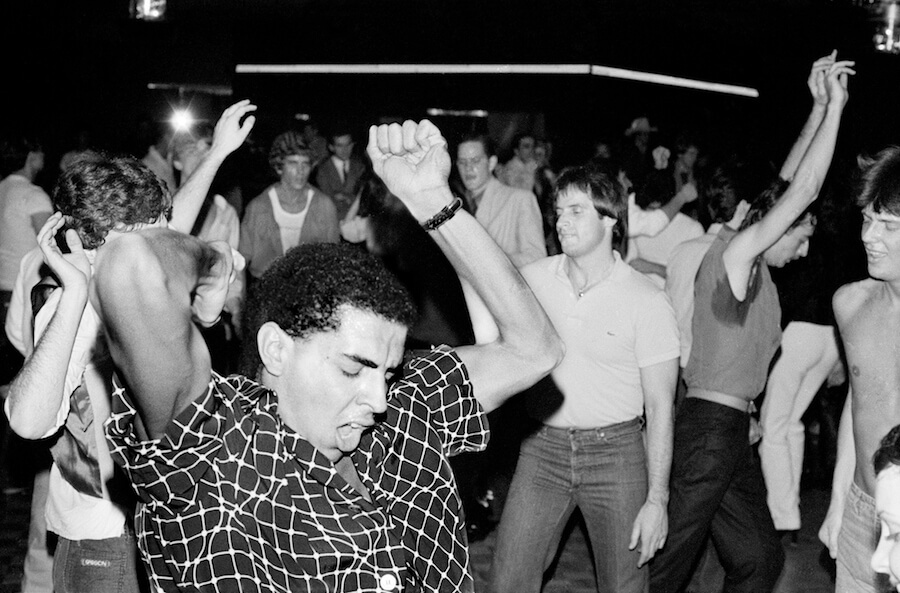 For a club that was only open for the last three years of the 1970s, Studio 54 left an indelible mark on culture. The AGO’s exhibition, originally organized by the Brooklyn Museum, attempts to bring visitors back to that heyday of hedonism, when the New York City night club became a haven for the sexually-liberated and revolutionary. It’s comprised of hundreds of photographs, film, sketches and designer fashions, after all, Studio 54 was as much about the looks as it was about the disco music.

Sime repurposes salvages circuits, keyboards and other technological detritus to create vibrant tableaus. Twenty-eight of the Ethiopian artist’s woven and layered pieces will be on display in this show collecting a decade’s worth of work. Sime’s work toes the line – or hesitantly walks the tightrope – teetering between the rampant technological advancement of our modern age and its detrimental impact on our environment. 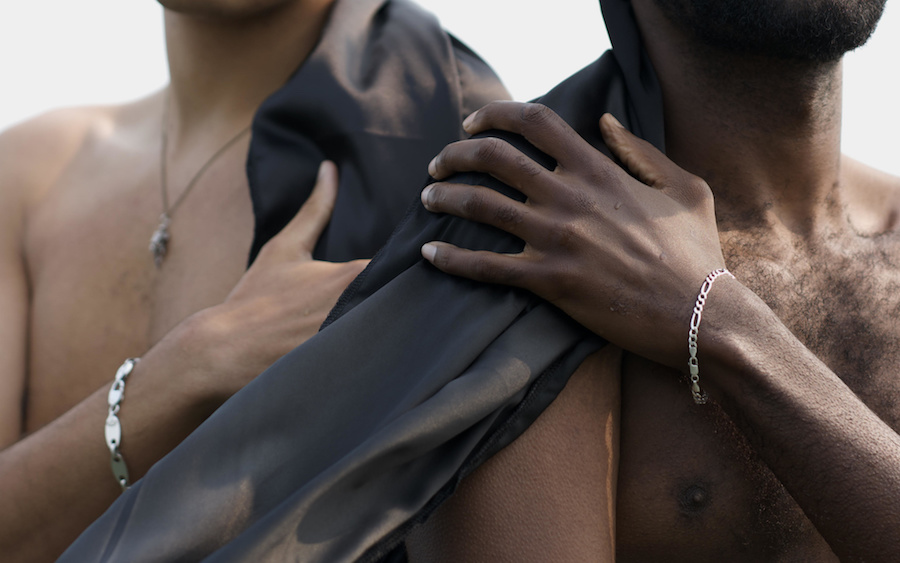 Esmaa Mohamoud, The Brotherhood FUBU (For Us By Us) (production detail, mural), 2020.

COVID-19 derailed the 2020 edition of CONTACT, so here’s hoping the slate of exhibited artists for the 25th anniversary aren’t stuck in limbo, too. As always, artists from across Canada and around the world will exhibit lens-based works on building facades, inside galleries and on billboards. Since this milestone year coincides with the city’s Year of Public Art, many site-specific and outdoor exhibitions are planned. Dana Claxton, whose photos of Indigenous women adorned in beaded jewellery and regalia wowed at the 2019 Toronto Biennial, and Toronto sculptor (and former NOW cover star) Esmaa Mohamoud are set to exhibit.

A career retrospective of the godfather of Pop Art, Andy Warhol, is coming to the AGO in May. The exhibition places his work within the context of the personal, social and political backdrop that influenced Warhol’s art. It’s a joint show between the Tate Modern in London, Museum Ludwig in Cologne and the AGO.

The annual international Black Portraiture[s] Conference will touch down in Toronto in October 2021. It’s the first time the ongoing conference will take place in Canada since launching in 2013. It will bring scholars and artists together for conversations about imagining the Black body in art. It will be hosted at Ryerson University.

Kelsey Adams is an arts and culture journalist born and raised in Toronto. Before covering food, life and culture for NOW Magazine, she wrote about music, art and film for several publications, including the Globe and Mail, The FADER, Complex CA and Canadian Art.

During the age of COVID-19, do you believe we’ll see more online art fairs worldwide in the future?

Online fairs were very important last year, but we already feel a weariness. Collectors do not visit all online viewing rooms. Some collectors said they are already tired of it. Since the ’60s, fairs and their success rely on the possibility to gather galleries, collectors, curators, press and artists. Nothing will change the physical perception of a work and meeting all the different actors of the art world. If in 2021, international art fairs cannot be organized, there will be less online visits. Nevertheless, it will strengthen local business in galleries in New York, Paris and London.

How has the pandemic and subsequent lockdowns worldwide affected the way in which you support your artists, collectors, curators and visitors, instituting new online content?

Until now and since March, we are lucky as this period went well. We sold several artworks online and at the gallery thanks to loyal collectors. We will have to adapt to a longer, and therefore structural change: less travels, less art fairs, less exhibitions of non-European artists, as they cannot come to France. We will focus on artists living in Europe.

Will you continue to participate in as many art fairs as before (whether physical or digital), or reduce the number?

Why did you decide to participate in the physical edition of Art Paris 2020 last September, after the fair had been postponed then canceled?

Nothing will replace a meeting at a booth and a collector looking at an artwork. Nothing replaces an exchange, a spontaneous discussion in front of a work or around art. It is also an opportunity to meet many people that we have not seen for months. We were very happy about Art Paris, which was a test. We learned to work wearing a mask for 10 hours and to recognize our collectors despite that. We concluded more than 20 sales, mostly to French collectors. That is a good sign and means that we have collectors in France despite what we usually hear. A third of our sales were made to new collectors.

How has your vision of the future of the art world changed? Does COVID-19 spell the end of massive physical art fairs, or do you believe that they will be able to survive now and in the future and remain relevant?

Already before the pandemic, there was a sign of the system of fairs running out of steam: too many, too large. On one hand, we saw the big global international fairs like the three Art Basels, the three Friezes and the FIAC being organized, and already the energies of some of these big fairs were starting to run out because too many exhibitors put forward globalized international art. On the other hand, smaller boutique fairs like Art Genève, or more specialized like African art in 1-54, are becoming more interesting and will now perhaps be those that will be possible to organize and that will have more visitors.

A new exhibition at a city art gallery features works by more than 20 London-area artists exploring their experiences during the pandemic.

Westland Gallery is hosting the annual gallery artists’ group exhibition until Feb. 13 that includes works by artists who will be featured at the gallery this year.

“This year we encouraged our artists to submit artwork that reflected on their experiences during 2020,” said Danielle Hoevenaars, the gallery’s associate director.

“The artistic responses we received are as unique as each individual experience of this unprecedented year has been. Contrasting themes play a big role in this exhibition: loss of public spaces alongside reflections of the home, feelings of isolation alongside the pursuit of meaning, happiness and justice.”

I Wear A Mask For Sydney Mines is a series of digital portraits of people who live or work in Sydney Mines wearing masks, which are designed to reflect their personalities. Included with each portrait is a comment from the subject about why they wear a face mask or a little about their experience during the COVID-19 pandemic.

“It’s a project that’s meant to bring people together since we can’t get physically together,” said Higgins, who is in the art education program at the Nova Scotia College of Art and Design in Halifax.

“And it’s a project that can encourage people to wear a face mask as a way to help protect everyone during the pandemic, which I think is an important message.”

Created for a public art class Higgins is taking at NSCAD University, the Sydney Mines native received a Rising Youth grant so she could continue the project until March 1.

During the last week of February, she is planning a virtual livestreaming show of all the portraits she’s completed to this point. But the artist, who has a bachelor of fine arts degree from Mount Allison University in Sackville, N.B., plans to continue doing portraits until the end of the pandemic.

One participant who is a COVID-19 survivor living off-island wrote a statement that Higgins calls “powerful.”

In it, the woman said her health will never be the same again and that she wants to live in a world where people care about protecting people around them.

“Our cases have been pretty low here. So hearing from someone who has had it and is still suffering from the lasting effects is really powerful,” Higgins said.

Alex Cormier saw Higgins’s Facebook post looking for subjects for the I Wear A Mask series and the mother of two said she wanted to participate in the project because protecting others is a message that hits close to home.

“It’s affected our family directly, the COVID pandemic. My mother had COVID and now she suffers long-term effects from COVID. Her lungs are permanently damaged,” Cormier said about her decision to be a model in the series.

“If by helping promote the message that face masks work, if we can protect anyone else’s mother or grandmother or father or someone else in the community by wearing masks, then we should do what we can to get that message across.”

Each digital portrait takes about an hour and a half to complete and is done on an iPad with a special pen which allows the artist to draw right on the screen.

To date, Higgins has completed 40 portraits and hopes to finish at least 100 by the time the pandemic is over.

Anyone interested in being a model in the I Wear A Mask For Sydney Mines series can contact Higgins by email at [email protected], through Facebook messenger on the project page or by phone at 902-578-9444.

Nicole Sullivan is an education, enterprise and diversity reporter for the Cape Breton Post.

'It is totally irresponsible': union calls out Manitoba's health-care restructuring amid the pandemic – CTV News Winnipeg