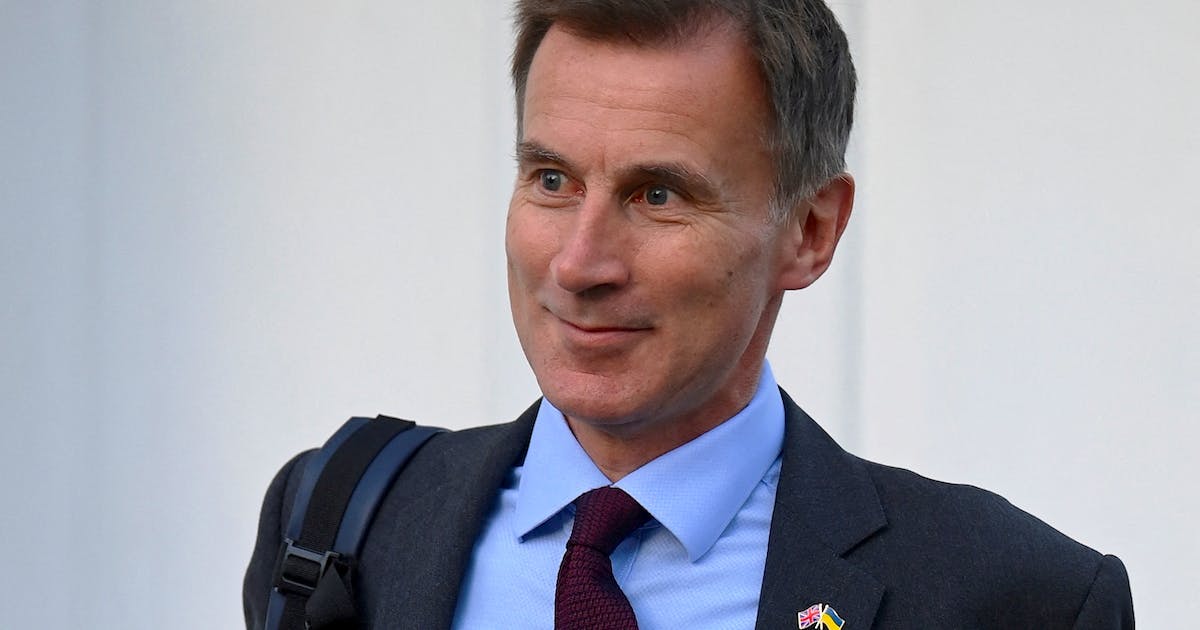 LONDON (Reuters) -British finance minister Jeremy Hunt said he will have to raise taxes in next week’s budget plan in order to fix the public finances and soften a potentially long recession, a newspaper quoted him as saying on Saturday.

Hunt is trying to restore Britain’s credibility among investors in the first budget plan since Rishi Sunak replaced Liz Truss as prime minister last month with a vow to undo her economic policy mistakes, chiefly a series of unfunded tax cuts.

Truss’s “mini-budget” in September set off a bond market slump that sent borrowing costs soaring and ultimately forced her to step down.

“This is going to be a big moment of choice for the country and we will put people ahead of ideology,” Hunt told the Sunday Times in an interview.

“You’re going to have a Conservative chancellor who is putting up taxes that, you know, go against the very reason that he went into politics,” he said, adding: “you have to do what is right for the country and the situation that we’re in and unfortunately that does mean tax rises.”

As well as more spending cuts, Hunt and Sunak are trying to prepare their Conservative Party for the tax increases which could reignite tensions in the party that forced out Truss and allowed Sunak to become Britain’s fourth Conservative prime minister since 2016.

The newspaper said Hunt planned to tackle a 55 billion-pound ($65.1 billion) hole in Britain’s budget by freezing thresholds and allowances on income tax, national insurance, inheritance tax and pensions for a further two years.

‘I WILL BE HONEST’

He also intended to halve a tax-free allowance for capital gains tax and lower the threshold for paying the additional rate of income tax to 125,000 pounds a year from 150,000 pounds, the Sunday Times said.

“What I can promise people is that I will be honest about the scale of the problem, and fair in the way that I address those problems, and yes, that does mean that people with the broadest shoulders will bear the heaviest burden,” he said.

Thursday’s budget plan will include forecasts similar to those of the Bank of England (BoE) which earlier this month warned of a long recession ahead.

“I think it’s very likely … the question is not really whether we’re in recession, but what we can do to make it shorter and shallower,” Hunt said in the interview.

Hunt said he would seek to work in cooperation with the BoE to control inflation and the global rise in interest rates, which is adding to the strains on Britain’s economy.

“The number one thing that I can do is help the Bank of England bring down inflation,” he said, adding he wanted to give confidence to businesses and households to invest and spend.

“If I can give them certainty that we have a plan to tackle inflation, to bring back stability to the economy then…that will be job done, as far as Thursday is concerned.”

The Times said Hunt was likely to commit only 20 billion pounds to extend the government’s energy bills cap for six more months after April, a third of its estimated 60 billion-pound cost in its first six months, meaning bills were likely to rise.

But Hunt was also considering a multi-billion-pound package of support to shield pensioners and benefit claimants from higher power bills, the newspaper said.

Pakistan’s Prime Minister Shehbaz Sharif has said that the government will have to agree to International Monetary Fund (IMF) bailout conditions that are “beyond imagination”.

Sharif’s comments on Friday came after an IMF delegation landed in Pakistan this week for last-ditch talks to revive vital financial aid which has stalled for months.

The government has held out against tax rises and subsidy-slashing demanded by the IMF, fearful of a backlash before elections due in October.

The global lender has set strict conditions before resuming the bailout programme for Pakistan, such as asking the government to allow a market-determined exchange rate for the local currency, ease fuel subsidies, and control circular debt in the power sector.

Pakistan’s economy has been in dire straits, stricken by a balance of payments crisis as it attempted to service high levels of external debt, amid political chaos and a deteriorating security situation. On Wednesday, year-on-year inflation had risen to a 48-year high leaving Pakistanis struggling to afford basic food items.

Before the IMF visit, Islamabad began to bow to pressure with the prospect of national bankruptcy looming and no friendly countries willing to offer less painful bailouts.

The government loosened controls on the rupee to rein in a rampant black market in US dollars, a step that caused the currency to plunge to a record low. Artificially cheap petrol prices have also been raised.

Letters of credit are no longer being issued, except for essential food and medicines, causing a backlog of thousands of shipping containers at a Karachi port stuffed with stock the country can no longer afford.

Sajid Amin, a senior official at the Sustainable Development Policy Institute, a research institute in Islamabad, said Sharif’s statement revealed the depth of the challenges facing the economy.

“Without any doubt, the economic situation is tough. Pakistan is facing multiple crises, including balance of payment crisis, political instability – issues which have delayed decision making from government,” he told Al Jazeera. Amin further said that the delays in the last few IMF reviews have led to increased uncertainty and panic in the market.

“Two of the major IMF conditions, market-determined exchange rate and petrol price increase, are majorly met already. The talks are now more focused on how to meet Pakistan’s circular debt target in the power sector. The fund has not accepted the government’s plan and has asked for a revised plan to deal with the circular debt problem,” he added.

Uzair Younus, director of the Pakistan Initiative at the Atlantic Council’s South Asia Center said that the major hurdle in the IMF negotiations seemed to be the scale and pace of actions required to reduce the fiscal deficit and circular debt. He noted that the IMF’s terms did not seem unreasonable, especially considering the number of times Pakistan has reneged on promises.

“A key issue that remains is the increase in electricity prices and a credible plan to reduce the circular debt. Pakistan has paused these increases for several months, citing floods and other challenges. The IMF wants a rapid increase in rates to reduce the circular deficit, but the government wants to stagger these increases,” the Washington, DC-based analyst told Al Jazeera.

It was no surprise that the IMF was not eager to agree to a staggered approach, given that Pakistan did not have much credibility left when it comes to following through on its agreements, Younus added.

Amin said that given the precarious economic situation in the country, the government must do whatever it takes to get the IMF on board.

“The government must understand, and I think it does understand to some extent, that inflationary pressure and other costs are much higher than the costs of IMF conditions. I think this statement, therefore, may be preparing ground and making people ready for tough measures that the government is going to take to meet the IMF conditions.”

The tumbling economy mirrored the country’s political chaos, with former Prime Minister Imran Khan heaping pressure on the governing coalition in his bid for early elections while his popularity remains high.

Khan, who was removed last year in a no-confidence motion, negotiated a multibillion-dollar loan package from the IMF in 2019.

But he reneged on promises to cut subsidies and market interventions that had cushioned the cost-of-living crisis, causing the programme to stall.

It has been a common pattern in Pakistan, where most people live in rural poverty, with more than two dozen IMF deals brokered and then broken over the decades.