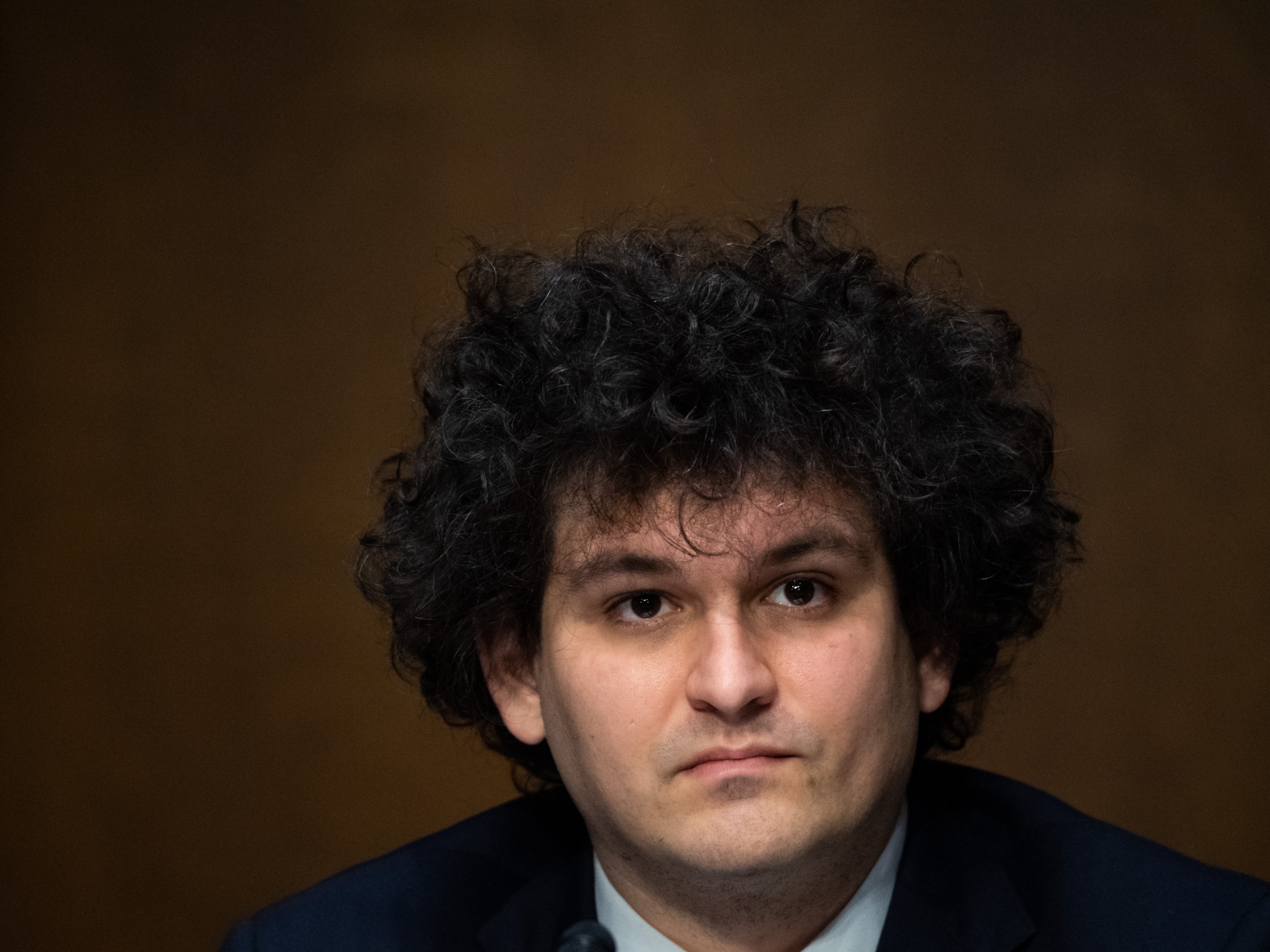 United States prosecutors allege Sam Bankman-Fried committed fraud and violated campaign finance laws, with the founder and former CEO of FTX also facing charges by US regulators, while a judge in the Bahamas has denied his petition for bail.

Bahamas Chief Magistrate JoyAnn Ferguson-Pratt denied the petition for Bankman-Fried to be released on bail, citing a “great” risk of flight and ordered the former CEO of FTX sent to the country’s department of corrections until February 8.

He had been arrested in the Bahamas on Monday.

US Attorney Damian Williams in New York said Bankman-Fried made illegal campaign contributions to Democrats and Republicans with “stolen customer money”, and that it was part of one of the “biggest financial frauds in American history”.

“While this is our first public announcement, it will not be our last,” he said, adding Bankman-Fried “made tens of millions of dollars in campaign contributions”.

Bankman-Fried faces a maximum sentence of 115 years in prison if convicted on all eight counts, prosecutors said, though any sentence would depend on a range of factors.

Williams declined to say whether prosecutors would bring any charges against other FTX executives and whether any FTX insiders were cooperating with the investigation.

The 30-year-old Bankman-Fried arrived at a heavily guarded Bahamas court on Tuesday for his first in-person public appearance since the cryptocurrency exchange’s collapse. He could be extradited to the US and he told the court he could fight the extradition.

Bahamian prosecutors have asked that Bankman-Fried be denied bail if he fights extradition.

“Mr. Bankman-Fried is reviewing the charges with his legal team and considering all of his legal options,” his lawyer, Mark S Cohen, said in an earlier statement.

In the indictment, prosecutors said Bankman-Fried had engaged in a scheme to defraud FTX’s customers by misappropriating their deposits to pay for expenses and debts and to make investments on behalf of his cryptocurrency hedge fund, Alameda Research LLC.

He also defrauded lenders to Alameda by providing them with false and misleading information about the hedge fund’s condition and sought to disguise the money he had earned from committing wire fraud, prosecutors said.

“We allege that the defendant conspired to defraud customers by misappropriating their deposits; to defraud lenders; to commit securities fraud and money laundering; and to violate campaign finance laws,” US Attorney General Merrick Garland said in a statement.

Both the US Securities and Exchange Commission (SEC) and the Commodity Futures Trading Commission (CFTC) alleged Bankman-Fried committed fraud in lawsuits filed on Tuesday.

“While he spent lavishly on office space and condominiums in The Bahamas, and sank billions of dollars of customer funds into speculative venture investments, Bankman-Fried’s house of cards began to crumble,” the SEC filing said.

Since at least May 2019, FTX raised more than $1.8bn from equity investors in a years-long “brazen, multi-year scheme” in which Bankman-Fried concealed that FTX was diverting customer funds to its affiliated cryptocurrency hedge fund, Alameda Research LLC, the SEC alleged.

While the public believed Bankman-Fried’s “lies” and sent billions of dollars to FTX, he improperly diverted customer funds to his hedge fund, the SEC said in a court filing. He continued to divert FTX customer funds even as it was increasingly clear that Alameda and FTX could not make customers whole, the SEC said.

Bankman-Fried has apologised to customers and acknowledged oversight failings at FTX but said he does not personally think he has any criminal liability.

Bankman-Fried founded FTX in 2019 and rode a cryptocurrency boom to build it into one of the world’s largest exchanges of the digital tokens. Forbes pegged his net worth a year ago at $26.5bn and he became a substantial donor to US political campaigns, media outlets and other causes.

A cryptocurrency exchange is a platform on which investors can trade digital tokens such as Bitcoin.

As legal challenges mount, the US Congress is also looking at crafting legislation to rein in a loosely-regulated industry.

FTX has shared findings with the SEC and US prosecutors and is investigating whether Bankman-Fried’s parents were involved in the operation.

FTX’s collapse was one of a series of bankruptcies in the crypto industry this year as digital asset markets tumbled from 2021 peaks.

FTX filed for bankruptcy on November 11, leaving an estimated one million customers and other investors facing losses in the billions of dollars. The collapse reverberated across the cryptocurrency world and sent Bitcoin and other digital assets plummeting.

Known in financial circles by his initials, SBF, Bankman-Fried was a prominent and unconventional figure. He sported wild hair, T-shirts and shorts on panel appearances with statesmen like former US President Bill Clinton and former United Kingdom Prime Minister Tony Blair.

Bankman-Fried became one of the largest Democratic donors in the United States, contributing $5.2m to President Joe Biden’s 2020 campaign.

Unlike other customers, Alameda was allowed to hold a negative account on FTX’s platform, the SEC said. Bankman-Fried directed code to be written that allowed this, the agency said.

VANCOUVER — Wine lovers have growing options on the shelf to enjoy their favourite beverage as producers in B.C. offer smaller container sizes.

Multiple British Columbia wineries over the last several years have begun offering their product in smaller, single-serve cans and bottles.

Along with making wine more attractive to those looking to toss some in a backpack or sip on the golf course, the petite containers leave wineries with options for a potential shift in mindset as Canadians discuss the health benefits of reducing alcohol consumption.

Vancouver-based wine consultant Kurtis Kolt said he’s watched the segment of the wine industry offering smaller bottles and cans “explode” over the last several years, particularly during the COVID-19 pandemic when people were meeting outdoors in parks and beaches and looking for something more portable to take with them.

“You’re not taking a hit on quality, you know? In fact, if someone is only going to be having a glass or two, you’re cracking a can and it’s completely fresh, guaranteed,” he said.

It’s also an advantage for people who want to drink less, he said.

“It’s much less of a commitment to crack open a can or a small bottle or a smaller vessel than it is to open a bottle,” he said.

“Then you have to decide how quickly you’re going to go through it or end up dumping some out if you don’t finish it.”

Last month, the Canadian Centre on Substance Use and Addiction released a report funded by Health Canada saying no amount of alcohol is safe and those who consume up to two standard drinks per week face a low health risk.

Health Canada has said it is reviewing the report.

Charlie Baessler, the managing partner at Corcelettes Estate Winery in the southern Interior, said his winery’s Santé en Cannette sparkling wine in a can was released in 2020 as a reduced alcohol, reduced sugar, low-calorie option.

“We’ve kind of gone above and beyond to attract a bit of a younger, millennial-type market segment with a fun design concept of the can and sparkling, low alcohol — all these things that have been recently a big item on the news,” he said.

Santé en Cannette is a nine per cent wine and reducing the alcohol was a way to reduce its calories, he said. The can also makes it attractive for events like a picnic or golf, is recyclable, and makes it easier for restaurants that might want to offer sparkling wine by the glass without opening an entire bottle.

“So the health is clearly one incentive, but I think more importantly, so was being able to enjoy a locally made product of B.C. from a boutique winery, dare I say, with a mimosa at 11 o’clock and not ruin your day,” he said.

Baessler said the winery has doubled production since the product was first released to about 30,000 cans a year, which they expect to match this year.

He said there’s naturally a market for the product but he doesn’t expect it to compete with the higher-alcohol wine.

“So this isn’t our Holy Grail. This is something that we do for fun and we’ll never compete, or never distract, from what is our core line of riper, higher-alcohol wine,” he said.

Jeff Guignard, executive director of B.C.’s Alliance of Beverage Licensees, which represents bars, pubs and private liquor stores, said the industry has seen a shift in consumers wanting options that are more convenient.

“It’s not a massive change in consumer behaviour but it is a definitely a noticeable one, which is why you see big companies responding to it,” he said.

Guignard said the latest CCSA report is creating an increased awareness and desire to become educated about responsible consumption choices, which is a good thing, but he adds it’s important for people to look at the relative risk of what they’re doing.

“If you’re eating fast food three meals a day, I don’t think having a beer or not is going to be the single most important determinant of your health,” he said.

“But from a consumer perspective, as consumer preferences change, of course beverage manufacturers respond with different packaging or different products, the same way you’ve seen in the last five years, a large number of low-alcohol or no-alcohol beverages being introduced to the market.”

“I don’t know if it’s reached its peak or if it will grow. I just expect it to be part of the market for now on.”

This report by The Canadian Press was first published Feb. 5, 2023.