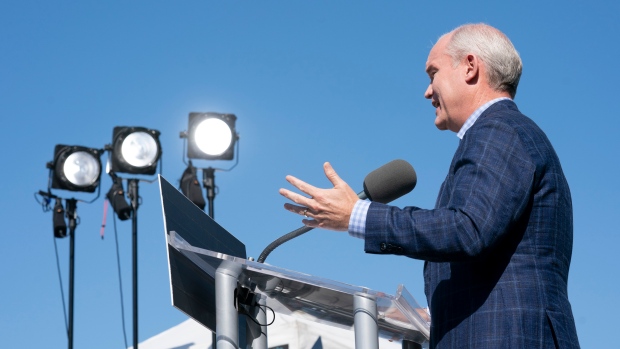 CAMBRIDGE, ONT. —
The issue of personal choice around getting vaccinated against COVID-19 continued to dog Canada’s Conservative leader Saturday as he spent the day vying for votes in seat-heavy Ontario, a crucial battleground for any possible election win.

As Erin O’Toole shifted his focus from making policy promises to cheerleading volunteers to get out the vote for Monday’s election day, he faced renewed questions about his decision not to require his candidates to be immunized. He did not answer queries Saturday about whether he knew how many of his party’s 336 candidates had received their shots.

“We have a rule that everyone that’s campaigning for us — candidates, people going door-to-door — have to use vaccines, and if someone is not fully vaccinated they must use a daily rapid test and follow all the public health guidance in the provinces they’re in,” he said at a small rally in Hamilton.

“We’ve said that from the beginning of the campaign and here’s something interesting, we’ve followed it.”

The issue is one that has dogged the leader over the course of the campaign, largely because the Liberals have raised it repeatedly and used it as grounds for numerous attacks. O’Toole is an outlier among the main party leaders for not requiring candidates to be fully immunized with two doses of vaccine before hitting the campaign trail.

At the heart of the matter is the party’s belief in personal freedoms, and its position of promoting vaccines without disrespecting the choices of those who don’t want one.

O’Toole is himself inoculated, and has committed to appointing a health minister who is fully vaccinated against COVID-19. But he didn’t say on Saturday whether he would be asking his candidates for their immunization status or how he would confirm who is or isn’t immunized.

“We need to encourage as many Canadians as possible to get vaccinated,” O’Toole said. “We’re not going to be doing that by wedging people, like Mr. Trudeau, always dividing people. Using even a health-crisis for his own benefit.”

Liberal Leader Justin Trudeau has called the crowds of protestors that have followed him throughout the campaign “anti-vaxxer mobs” for their resistance to his plan to make vaccines mandatory for federal workers and airline passengers. The protesters also oppose his support for vaccine passport systems used by a growing number of provinces.

Alberta and Saskatchewan recently joined the list of jurisdictions to adopt such a program after weeks of first opposing the idea and then changing their minds when a wave of cases driven by a more infectious virus variant filled hospitals with COVID-19 patients who are not fully vaccinated.

Before her province announced it would introduce such a system, Saskatchewan incumbent Conservative MP Cathay Wagantall posted a video to YouTube asking people to advocate against it.

“Right now, we, fortunately, are living in a province where our premier does not mandate passports and has not mandated vaccines. I encourage you to contact the premier and your MLA to thank them and to encourage them to continue to persevere in the face of pressure to implement such a passport that discriminates against those who choose not to take the current vaccines being offered by our federal government,” she said.

Wagantall said in a statement Saturday she was asking residents to thank their provincial representative for not introducing such a system, but now that it has, she respects that decision.

And this past week, incumbent Conservative Martin Shields told a federal candidates forum, “I’ve never been asked as a member of Parliament by my party whether I’m vaccinated.”

“It isn’t an issue in our party, it’s your choice, so I’ve never been asked,” the Alberta legislator said, adding he believes getting a shot against COVID-19 should be left up to an individual.

Neither campaign for Wagantall or Shields have returned a request for comment.

While also campaigning in Ontario, the Liberal leader attacked O’Toole for “protecting anti-vaxxers” in his caucus.

O’Toole started his second-last day of campaigning by jogging past a farmers market outside of Waterloo, Ont., without appearing to go inside to capitalize on one of his final chances to meet prospective voters.

During the day, he twice stopped to thank volunteers on different campaigns for a candidate in Waterloo, and then in Cambridge. At the latter location, he appeared to ignore a woman seen standing on a sidewalk near the patio where he had been bumping elbows with campaign workers and shouting questions about what he planned to do for the city and Indigenous Peoples.

Those decisions reflect the party’s overall campaign strategy, which has relied more on O’Toole answering questions from people through virtual townhalls in a broadcast studio in downtown Ottawa rather than pressing flesh in local communities.

He defended taking a more physically distanced approach by saying he’s met thousands more people this way and run a safer campaign than the Liberal effort, which has seen Trudeau appear in crowded rooms and at hospitals.

O’Toole also received an endorsement Saturday from retired vice-admiral Mark Norman, who was at the centre of a failed prosecution by the Liberal government in a politically heated case that ended his military career.

In a video clip the Conservatives shared on social media, Norman said Canadians have an important decision to make as to who should lead the country through the challenges it faces at home and abroad.

This report by The Canadian Press was first published Sept. 18, 2021.