SpaceX’s Crew Dragon spaceship is launching again this weekend – perhaps for its final flight before the capsule carries a crew of astronauts.

On Saturday morning, Elon Musk’s space company plans to conduct a crucial safety demonstration called an in-flight abort test. The goal: demonstrate to NASA that the spacecraft’s escape mechanisms that can jet astronauts away from a rocket in case an explosion or other emergency arises during their ascent. NASA requires this demonstration before it will allow SpaceX to fly its astronauts into space.

The test is slated to begin at 8 a.m. ET on Saturday, January 18 at NASA’s Kennedy Space Center in Florida. You can watch the action in real time via the YouTube video player below.

A major milestone for SpaceX and NASA

The goal of the Crew Dragon spaceship is to ferry astronauts to and from the International Space Station.

NASA hasn’t been able to transport astronauts on its own spaceships since July 2011, when its space shuttle completed its final flight. Since then, the agency has relied exclusively on Russia to ferry its astronauts to and from orbit in Soyuz spacecraft. To develop new American-made spacecraft, NASA launched the Commercial Crew program: a competition between private companies for billions of dollars‘ worth of government contracts. SpaceX and Boeing won.

On Saturday, the unmanned Crew Dragon will sit atop one of SpaceX’s Falcon 9 rockets. After 84 seconds, engineers will intentionally cut the rocket engines. By that point, it will be traveling so fast (nearly twice the speed of sound) that aerodynamic forces rip the rocket to pieces. The fuel tanks will rip open, and an explosion will ensue.

The Crew Dragon, meanwhile, will detach and escape as the rocket explodes by firing its own engines. If all goes well, the spaceship will get far enough away to stay safe, then deploy built-in parachutes and splash down somewhere in the Atlantic Ocean.

„We tried to design a way to save B1046, but not possible,“ Elon Musk wrote on Twitter, referring to the reusable first-stage rocket booster. He added that it would be „destroyed by dragon fire.“

SpaceX’s recovery ship, called GO Searcher, will be stationed nearby to retrieve it.

Crew Dragon has been in development since 2012. In March 2019, SpaceX launched it into orbit for the first time, carrying a dummy and a plush toy. Crew Dragon autonomously docked with the space station then later returned safely to Earth.

However, the following month, a Crew Dragon capsule exploded during a ground test – a different NASA safety check on its escape system. The company said the problem was due to a „leaky valve,“ which it called „an anomaly.“ 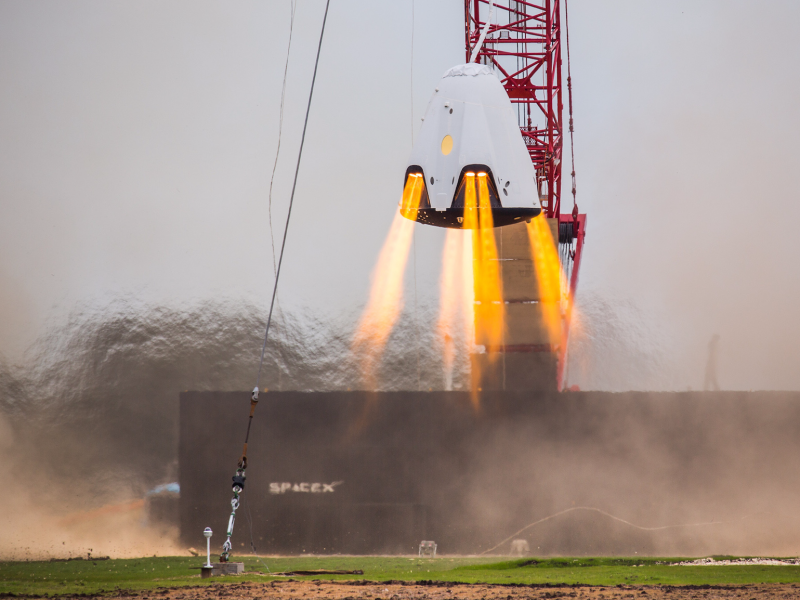 The weather forecast shows that Saturday should be clear and sunny. If the test needs to be postponed, there are additional windows set aside on Sunday and Monday.

If all goes smoothly on Saturday, SpaceX’s first crewed launch is expected later this year, with NASA astronauts Bob Behnken and Doug Hurley at the helm.

NASA and SpaceX will provide joint live coverage – watch below

Researchers say the blast is the biggest since the universe began. It occurred at the center of a galaxy cluster some 390 million light years away from Earth.

Astronomers have discovered the biggest explosion seen in the universe, originating from a super-massive black hole.

The blast, they said, is the biggest explosion seen in the universe since the Big Bang. The explosion reportedly released five times more energy than the previous record holder.

The blast occurred at the center of the Ophiuchus cluster of galaxies, some 390 million light years away. The cluster is a conglomeration of thousands of galaxies, hot gas and dark matter bound together by gravity.

“We’ve seen outbursts in the centers of galaxies before but this one is really, really massive, ” said Melanie Johnston-Holitt, a professor at the International Center for Radio Astronomy Research (ICRAR). “And we don’t know why it’s so big.”

Astronomers used NASA’s Chandra X-Ray Observatory to make the discovery, as well as a European space observatory and ground telescopes. Scientists picked up the first sign of the explosion in 2016.

Chandra images of the cluster revealed an unusual curved edge, but scientists ruled out a possible eruption given the amount of energy that would have been needed to create such a large cavity of gas. The curviture was later confirmed to be a cavity.

According to ICRAR, the lead author of the study, Dr Simona Giacintucci from the Naval Research Laboratory in the United States, compared the blast to the 1980 eruption of Mount St. Helens, which tore the top off the mountain.

“The difference is that you can fit 15 Milky Way galaxies in a row into the crater this eruption punched into the cluster’s hot gas,” she said.

The blast is believed to be over by now, and, according to the research team, more observations are needed in other wavelengths to better understand what occurred.

We made this discovery with Phase 1 of the MWA, when the telescope had 2048 antennas pointed towards the sky,” said Johnston-Hollitt. “We’re soon going to be gathering observations with 4096 antennas, which should be 10 times more sensitive. I think that’s pretty exciting.”

DW sends out a selection of the day’s news and features. Sign up for it here.

A Facebook post by Ukraine’s Ministry of Education and Science shows a research station on an island just off the coast of Antarctica’s northernmost peninsula covered in “blood snow.”

The gory-looking scene is not the result of a seal hunt gone wrong — it’s an astonishingly red-pigmented, microscopic algae called Chlamydomonas nivalis, which thrives in freezing water as the ice melts during Antarctica’s record-breaking warm summer.

When summer hits the polar regions, the algae bloom, staining the snow and ice around it in blood-resembling red, as Live Science explains. The phenomenon was first noticed by Aristotle thousands of years ago and is often referred to as “watermelon snow” thanks to its subtly sweet scent and color.

What makes the blooming algae red is the same stuff that give carrots and watermelons their reddish tint — carotenoids.

It’s a stunning display of a natural phenomenon — but it also creates a nasty feedback loop that causes the ice to melt faster. The red color causes less sunlight to be reflected off the snow, causing it to melt faster, as the Ukrainian team explains in its post. The accelerated melting then causes more algae to grow, completing the cycle.

It’s not the only surreal display in the world caused by such a feedback loop, as Live Science points out. Blooming algae caused sea foam to swallow up the coast of a Spanish town in January. Similar algae blooms even caused shores around islands in the East China Sea to glow blue.

More on algae: A New Bioreactor Captures as Much Carbon as an Acre of Trees

Scientists have detected evidence for a colossal explosion in space – five times bigger than anything observed before.

The huge release of energy is thought to have emanated from a supermassive black hole some 390 million light years from Earth.

The eruption is said to have left a giant dent in the Ophiuchus galaxy cluster.

Researchers reported their findings in The Astrophysical Journal.

They had long thought there was something strange about Ophiuchus galaxy cluster, which is a giant aggregation containing thousands of individual galaxies intermingled with hot gas and dark matter. X-ray telescopes had spied a curious curved edge to it.

The speculation was that this might be the wall of a cavity that had been sculpted in its gas by emissions from a central black hole.

Black holes are famous for gorging on infalling matter, but they will also expel prodigious amounts of material and energy in the form of jets.

Scientists at first doubted their explanation however, because the cavity was so big; you could fit 15 of our own Milky Way galaxies in a row into the hole.

And that meant any black hole explosion would have to have been unimaginably prodigious.

But new telescope data from the Murchison Widefield Array (MWA) in Australia and the Giant Metrewave Radio Telescope (GMRT) in India seem to confirm it.

“In some ways, this blast is similar to how the eruption of Mount St Helens (volcano) in 1980 ripped off the top of the mountain,” said Simona Giacintucci of the Naval Research Laboratory in Washington, DC, and lead author of the study.