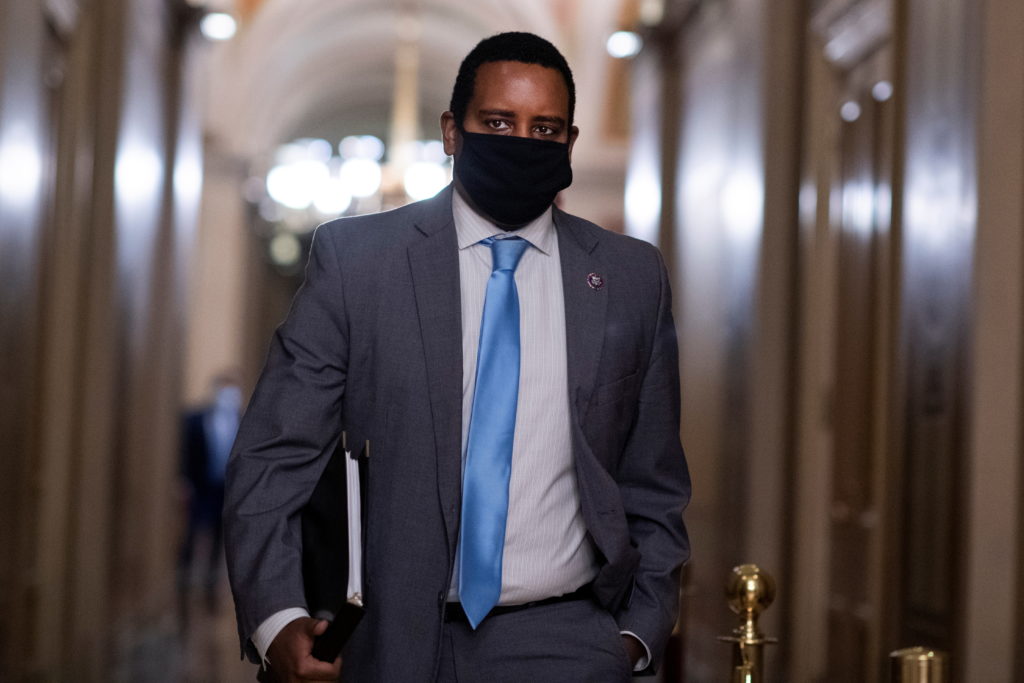 Watch Neguse’s remarks in the player above.

In the penultimate presentation of the Democratic prosecutors, Rep. Joe Neguse told Senators, “There are moments that transcend party politics, and that require us to put country above our party because the consequences of not doing so are just too great.”

“Senators, this is one of those moments,” he said.

Neguse said he fears that if the former president is not punished, “the violence we saw that day may be just the beginning.”

“Senators this cannot be the beginning. It can’t be the new normal. It has to be the end,” he said.

While most Democrats were expected to vote to convict the former president, acquittal appeared likely with a two-thirds majority required for conviction and the chamber split 50-50 between the parties.

The Week In Politics: 100 Angles On An Insurrection – NPR

YEREVAN, ARMENIA —
Political tensions in Armenia heightened Monday, with supporters of the embattled prime minister and the opposition each holding massive rallies at separate sites in the capital.

Prime Minister Nikol Pashinyan has faced opposition demands to resign since he signed a peace deal in November that ended six weeks of intense fighting with Azerbaijan over the Nagorno-Karabakh region. The Russia-brokered agreement saw Azerbaijan reclaim control over large parts of Nagorno-Karabakh and surrounding areas that had been held by Armenian forces for more than a quarter-century.

Opposition protests seeking Pashinyan’s ouster abated during the winter but intensified last week amid a rift between him and the country’s military leaders.

The spat was sparked by Pashinyan firing a deputy chief of the military’s General Staff who had laughed off the prime minister’s claim that only 10% of Russia-supplied Iskander missiles that Armenia used in the conflict exploded on impact.

The General Staff then demanded Pashinyan’s resignation, and he responded by dismissing the General Staff chief, Col. Gen. Onik Gasparyan. The dismissal has yet to be approved by Armenia’s largely ceremonial president, Armen Sarkissian, who sent it back to Pashinyan, saying the move was unconstitutional.

Pashinyan quickly resubmitted the demand for the general’s ouster, and the prime minister’s allies warned that the president could be impeached if he fails to endorse the move.

Sarkissian’s office responded with a strongly worded statement condemning “inadmissible speculation” about his move and emphasizing that his decision was “unbiased and driven exclusively by national interests.”

Addressing a rally of thousands of his supporters, Pashinyan voiced hope the president would endorse the dismissal of the General Staff’s chief for meddling in politics.

He blamed the country’s former leader who lost power in the 2018 “velvet revolution” for influencing the military brass and trying to “set the army against the legitimately elected authorities and the people.”

The prime minister also suggested calling a constitutional referendum in October to ask voters about expanding presidential powers to avoid future crises, although he didn’t spell out specific changes.

After an hour-long speech, Pashinyan led his supporters on a march across Yerevan under the heavy escort of police and security officers.

Amid the escalating tensions earlier in the day, a group of protesters broke into a government building in central Yerevan to press for Pashinyan’s resignation, but they left shortly afterward without violence. Later, thousands of opposition supporters attended a demonstration demanding that the prime minister resign.

Pashinyan, a 45-year-old former journalist who came to power after leading large street protests in 2018 that ousted his predecessor, still enjoys broad support despite the country’s humiliating defeat in Nagorno-Karabakh and the opposition calls for his resignation.

The prime minister has defended the peace deal as a painful but necessary move to prevent Azerbaijan from overrunning the entire Nagorno-Karabakh region, which lies within Azerbaijan but was under the control of ethnic Armenian forces backed by Armenia since a separatist war there ended in 1994. The fighting with Azerbaijan that erupted in late September and lasted 44 days has left more than 6,000 people dead. Russia has deployed about 2,000 peacekeepers to monitor the Nov. 10 peace deal.

Armenia has relied on Moscow’s financial and military support and hosts a Russian military base — ties that will keep the two nations closely allied regardless of the outcome of the political infighting.

Last week, the Russian Defence Ministry rebuked the Armenian leader for criticism of the Iskander missile, a state-of-the-art weapon touted by the military for its accuracy. The Russian military said it was “bewildered” to hear Pashinyan’s claim because Armenia hadn’t used an Iskander missile in the conflict.

In a bid to repair the damage to Armenia’s ties with Moscow, Pashinyan rescinded his claim Monday, acknowledging that he made the statement after being misled. 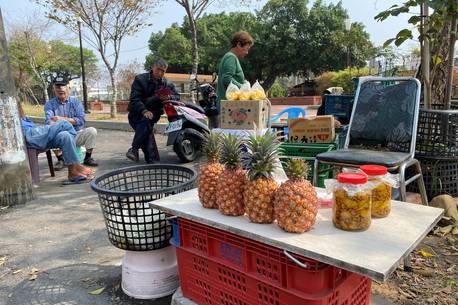 BEIJING (Reuters) – China on Monday denied accusations by Taiwan that a ban on pineapples from the island was about politics, saying it was purely a matter of biosecurity, in an escalating war of words that has added to existing tensions.

China announced the ban last week, citing “harmful creatures” it said could come with the fruit, threatening China’s own agriculture.

Taiwan, which China claims as its own territory, says there is nothing wrong with its pineapples and that Beijing is using the fruit as another way to coerce the island.

China’s Taiwan Affairs Office said the decision was “totally rational and necessary” and that customs had a responsibility to prevent diseases carried by plants from entering the country.

“The Democratic Progressive Party (DPP) authorities have deliberately misrepresented and maliciously interpreted technical issues, taking the opportunity to attack and discredit the mainland,” it said, referring to Taiwan’s ruling party.

The DPP has neither the will nor the ability to solve practical problems, and they can only evade their own responsibility by “slandering the mainland”, it added.

While Taiwan is best known internationally for exporting semiconductors, the sub-tropical island has a thriving fruit industry developed when it was a Japanese colony, and last year more than 90% of its exported pineapples went to China.

Politicians have rallied behind pineapple farmers, posting pictures of themselves in fields with farmers and tucking into the fruit on their social media pages, encouraging domestic consumers to pick up the slack.

The government has also been asking Taiwanese companies to make bulk purchases, and looking for alternative export markets.

President Tsai Ing-wen on Sunday visited a pineapple farm in southern Taiwan, where the bulk of the fruit is grown and where the DPP traditionally enjoys strong support.

China has ramped up pressure to get Taiwan to accept Chinese sovereignty, including regularly flying fighter jets and bombers near Taiwan or into its air defence identification zone.

Today’s Morning Brief is brought to you by GCT’s #BetterDeltaport campaign. The Port of Vancouver’s multi-billion-dollar, taxpayer-funded RBT2 project will create unneeded capacity, uncompetitive port rates and will cause damage that, according to Environment Canada, is “permanent, irreversible, and continuous.” Fortunately, there is a way to #buildbackbetter. Learn more.

You can listen to today’s brief here:

— Liberals accuse Tories of ‘playing politics’: Liberal MPs are accusing the Conservatives of blocking the government’s legislative agenda almost to the point of obstruction. While all parties say they do not want an election amid the pandemic, the Canadian Press looks at how the Conservatives might be pursuing a strategy that would give the Liberals reason to call one.

— Kady O’Malley looks ahead to the day in politics with iPolitics AM: “With daily Commons proceedings on pause until next Monday, Prime Minister Justin Trudeau will start his week with a virtual visit to Nova Scotia’s Eastern Passage, where, as per his official itinerary, he’ll join local MP Darrell Samson for a closed-door video chat with members of the Island View High School student council. Also on the prime ministerial to-do list today: A huddle with his front bench team, as well as other unspecified ‘private meetings.’”

— Blinken on two Michaels: The U.S. Secretary of State, Antony Blinken, says his country will continue to stand with Canada in its efforts to secure the release of Michael Kovrig and Michael Spavor from Chinese detention.

— Kremlin-linked Twitter accounts targeted Canada: Canada and Canadian political leaders were targeted more than 300 times by social media accounts that have now been shut down by Twitter due to their links to the Russian government or its proxies. Many tweets made by the now-suspended accounts were focused on undermining confidence in NATO, The Globe and Mail reports, citing data from DisinfoWatch.org.

— Woman behind Vance allegations speaks out: Maj. Kellie Brennan, the woman at the centre of allegations of inappropriate behaviour against Gen. Jonathan Vance, is calling for an independent investigation to fix systemic problems within the Canadian armed forces. Since sharing her story publicly with Global News a week ago, she says she has been flooded with messages from others who allege they have experienced misconduct in the military.

— Divorce Act changes take effect: New rules meant to put an end to the winner-loser mentality of family law come into effect today. Divorcing spouses now have a legal “duty” to use other channels, rather than the courts — such as negotiation, collaborative law, or mediation — “to the extent that it is appropriate to do so.” The aim is to avoid drawn-out court battles that could harm the children of separating parents.

— Coming up: Meng Wanzhou is due back in the British Columbia Supreme Court today. Her lawyers are expected to argue for admission of evidence to support their case.

— Protests in Hong Kong: Crowds gathered outside a courthouse in Hong Kong in the territory’s biggest protests in months. They demonstrated to support 47 pro-democracy activists charged with subversion under the national security law.

U.S. Secretary of State Antony Blinken called for the release of the campaigners in a tweet yesterday.

— Tehran rejects talks: Iran rejected proposed nuclear negotiations with the U.S., which the European Union had offered to broker. Tehran insists that the U.S. must lift all unilateral sanctions before the two sides can come to the table, while Washington says Iran must make the first move and return to compliance with the 2015 deal.

— U.S. House passes $1.9 trillion relief package: The stimulus bill is now headed to the U.S. Senate, after the House passed it early on Saturday.

— Myanmar military fires on protesters: Myanmar soldiers opened fire on protesters over the weekend, killing at least 18 people in the deadliest day of protests since the coup last month.

This morning, Aung San Suu Kyi appeared in court via a video link, the first time she’s been seen publicly since being detained in the coup.

CARTOON OF THE DAY

After North Korea closed its borders to trains as part of its COVID-19 measures, a group of Russian diplomats seeking to leave Pyongyang were forced to do so via a hand-pushed rail trolley.