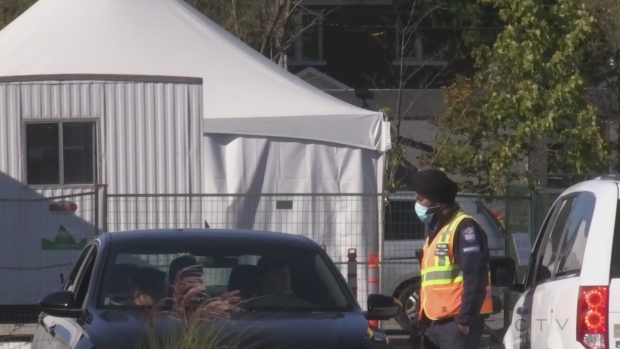 KITCHENER —
There have been 49 new cases of COVID-19 confirmed by the Region of Waterloo as the area prepares to move into the red restriction tier on Monday.

The Saturday afternoon update also showed the total number of cases increasing by 47, a number that can differentiate at times from new cases due to previous counting errors.

There were also 44 more resolved cases reported, the active case count increased by three, while the number of those hospitalized and COVID-related deaths remained the same.

Four new facility outbreaks have been declared in the area. Two different industrial workplaces each have three cases attributed to them, an unnamed food and beverage establishment has four cases connected to it, while a dance class at a sports and recreation facility is listed to two cases.

In Ontario, yet another single-day record was broken on Saturday with 1,588 cases confirmed.

This is the 16th straight day in which the province has reported case counts in the quadruple digits.

Two hospital systems gave Thanksgiving updates on their coronavirus caseloads, both saying that cases are rising in their hospitals but expressing confidence in their ability to deal with the increasing case load.

One hospital system said, the situation now is “nothing approaching what we experienced in March,” and another system echoing that saying they are “well within our ability to handle.”

Mt. Sinai healthcare system’s Chief Medical Officer, Dr. Vicki LoPachin, said in a note Wednesday, that coronavirus cases continue to rise across the Mt. Sinai health system but that the current number of cases “is still within our projections, and well within our ability to handle.”

“Our COVID-19 inpatient census remains at less than 10 percent of what we saw at the peak in the spring,” LoPachin said. “And we do not believe we will ever see anything close to those prior numbers.”

Dr. Craig Smith, chair of the department of surgery at Columbia University Irving Medical Center, which is also affiliated with NewYork-Presbyterian’s hospital system, said in a message Thursday that the new Covid-19 case curve is “unequivocally positive” but nothing approaching “what we experienced in March.”

Smith’s candid updates during the heat of the coronavirus crisis in New York gained a large following in the spring.

Smith said NYP and CU have a “meticulous plan” for staffing changes if the surge in cases increases quickly, and that at this time, the systems are not close to a level where non-urgent surgeries would need to be canceled in order to deal with an influx of cases.

Smith also said the institutions are in the process of planning “thorough plans” for vaccine distribution.

On Wednesday morning, the system had 157 Covid-19-positive patients admitted to their hospitals, 25 of whom were in critical care.

LoPachin warned Mt. Sinai healthcare workers to “relax, recharge and prepare for the work ahead” as coronavirus case numbers are expected to increase, as some ignore warnings against gathering for the Thanksgiving holiday.

“We know that many people will ignore the warnings and gather unsafely with their families tomorrow, and that the patients with new COVID-19 infections resulting from those gatherings will arrive in our hospitals in the next few weeks,” LoPachin said. “Your family needs you, your colleagues need you, and your patients need you, now more than ever.”