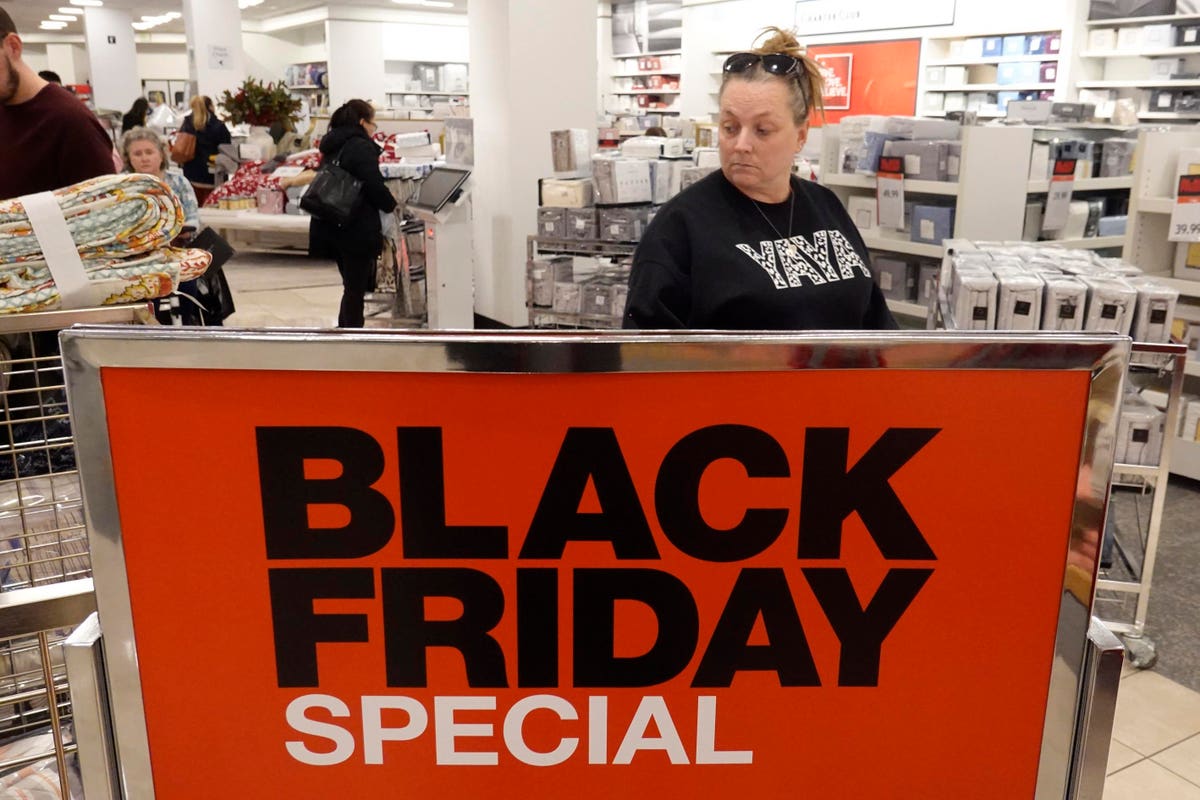 ‘Tis the time for massive volumes of numbers detailing the particulars of consumers’ responses to gift buying. This year, that also incorporates uncertainty, inflation, and supply chain issues. So far, the results aren’t crushing by any means for retailers and the overall economy (which, let’s remember, is about 68% consumer spending). But they’re not that exciting, either.

A warning: the data is provided by companies that offer systems and information for retail supply chain or marketing management. Figure that colors the presentations and assumptions.

JCI
, which itself is big in technologies for buildings, energy, retail, and some other sectors. Its preliminary data on in-store shopping on Black Friday suggested a 47.5% increase over 2020, which sounds good until you remember that during a tough time in the pandemic, many people weren’t all that excited about being in crowds.

Sensormatic also has data comparing 2021 to 2019, the previous “normal” year. Shopper visits were down 28.3% from then. Visits to stores on Thanksgiving Day were down 90.4% from 2019. Which doesn’t seem necessarily a bad thing. But, even if no one in the business is saying, this is likely freaking out many in retail who have been looking to regular patterns for the holidays.

ADBE
tracks online shopping and had expected spending on Thanksgiving Day to be between $5.1 billion and $5.4 billion, with the final coming in at the low end. Similarly, Black Friday, during which people spent $8.9 billion, was also at the low end of the predicted range and, interestingly, slightly lower than in 2020.

Both numbers are well up over 2019, with Black Friday hitting $7.4 billion and Thanksgiving Day, $4.2 billion.

A couple of possibilities speak to both the economy and many, though clearly not all, consumers worried about being in crowds, especially with news of the Covid omicron variant. An obvious one is to factor inflation into the analysis.

Costs have been rising, so is there any wonder that results might come in on the low side of estimates, especially when the practice of forecasting is to create an informational circus that the more comfortable can chew over? Using dollars as the measure, the numbers now mean smaller amounts of consumption than once might have happened. With the official measure of inflation, the consumer price index, running 6.9% since October 2020, maybe the number is more analogous to $5.1 billion less than 6.9%, or $4.74 billion. Then add another 1.2% of inflation in 2020, so a total now of 8.1%. That makes the $5.1 billion more like $4.68 billion, so much closer to 2019, with much of the growth due to inflation and not organic expansion.

Another possibility is that many people are still hurting financially from the pandemic crash. The worlds of finance and media often focus on medians or averages. If they seem to be in acceptable shape, then the prognosis is a strong economy.

Except, averages are usually top weighted, meaning that the fortunes of the financially fortunate at the apex of the socioeconomic mountain are so large that they pull the results up. Describe the economy by the average and you almost always automatically put lipstick on a rogue swine. Use the median instead and too easily people forget that half of the population does worse and half better.

Statistics can be powerful and useful, but still limited if people don’t pay attention to the distribution—the picture of how fortune, and the machinations of humankind, allot outcomes, good and not, among everyone.

Millions struggle with meeting rents that rise far faster than their incomes. At the end of September, consumers paid 10.5% more than the year before to obtain meat, poultry, fish, and eggs. It is expensive to just live for a large portion of the country.

Tracking of spending at the holidays ignores that issue. Granted, business affects jobs which have an impact on everyone. But public fascination is another distraction from what a broader view of the economy would provide. And that says quite a bit about where we are, fiscally and morally.

Looser monetary policy in China won’t be sufficient to stabilize the economy and a faster increase in government spending is needed, according to a former adviser to the central bank.

“Under the current economic situation, the role the PBOC can play is limited,” said Yu Yongding, a member of the monetary policy committee of the People’s Bank of China in the mid 2000s, adding that he would “emphasize the importance of fiscal policy.”

While worries about Evergrande seem to have quieted, none of this means there’s nothing to learn from what happened. The Chinese real-estate giant is a useful reminder of how politicians and bureaucrats have no ability to prop up or grow any economy. None at all.

This is worth bringing up as news out of Beijing signals alleged economic support from China’s leadership. In a recent front page piece (“Beijing Moves to Cushion Economy As Risks Worsen”) at the Wall Street Journal, Stella Yifan Xie reported that “China’s leaders” cut “two key interest rates” in “response to the impact of pandemic restrictions and a property-market slump.” At best, these machinations will achieve less than nothing. And the reasons why are obvious.

Most obvious is that market interventions don’t work. By definition. Markets aren’t political or inclined one way or the other. Markets quite simply are. They’re a reflection of what’s known in the here and now. They’re an ideology-blind verdict. Please keep this in mind with government interventions meant to “Cushion Economy As Risks Worsen.” The translation of the latter is that Beijing’s leaders will lean against the truthteller that is the market itself. The markets are signaling dismay with pandemic restrictions, and they’re similarly signaling mistakes made by investors in the allocation of capital toward property.

In which case Beijing is aiming to reshape reality. Even if it succeeds (it won’t) in overwhelming the message of the market, such a move will not enhance China’s economy. We know this because restrictions on human action are by their very name a growth depressant, and China’s leaders are trying to paper over their own freedom-limiting errors. Just as harmful would be attempts to limit the market’s message about property mis-allocations. This is the equivalent of Congress intervening in the failure that was Warren Beatty and Dustin Hoffman’s Ishtar as a spur for the stars to make Ishtar II. Massive federal support (buying tickets for empty theaters) could have theoretically created a blockbuster that was otherwise a flop, but doubling down on bad is rarely good. The movie industry is bolstered by its failures precisely because failure teaches it how to succeed. Applied to China, how will it aid the property market and the economy more broadly if bad decisions are subsidized?

To which some will say an ability to limit the pain of bad decisions is evidence that government interventions do in fact work. Precisely because government can spend in order to mitigate the pain of bad, so can it soften the blow of Evergrande’s collapse by propping up same. The latter is a very debatable presumption (see below), but the presumption only speaks to what’s visible as is.

What’s not visible is what intrepid investors could achieve if able to acquire properties or resources on the fire-sale cheap. Economic growth is a consequence of investment in frequently unknown, untested, and potentially transformative ideas, but what’s unknown, untested and potentially transformative is generally expensive. It’s risky. This is important in consideration of bailouts. They limit the potential fall in prices, thus making it more challenging for the purchasers of troubled assets to take big risks. Investors quite simply have a lot more leeway to make audacious bets if they can buy distressed market goods for .25 cents on the dollar versus .75.

Worse, all businesses and entrepreneurs eager to rush a different, more vibrant future into the present must have access to precious resources (capital) in order to take the giant steps. Except that if government is providing an alleged “cushion” for a weakening economy, it’s by definition keeping precious capital in the hands of those who’ve abused it or misused it, as opposed to those interested in treating it better.

Stated simply, bailouts are always and everywhere an economic wet blanket. It’s been said here since 2008, but eventually it will be conventional wisdom that the interventions overseen by the George W. Bush administration and the Ben Bernanke Fed didn’t avert a crisis, rather they were the crisis. Absent their naïve meddling, 2008 is presently a year instead of an adjective.

Which brings us back to Evergrande. There’s more to its story than simple debt troubles. To see why, consider the currency denomination of so much of its debt. It’s in dollars. This speaks volumes, and most crucially does about the globalization of capital. While Evergrande is based in China, it’s apparent that the financing of its business endeavors is globalized.

On its own the above is a positive statement of the growing interconnectedness of the world economy, but it also speaks to the folly of “Beijing” attempting to cushion China’s economy. Good luck.

Indeed, assuming China’s economy is really contracting, rest assured that global capital intermediaries will pull from China’s commercial sector much more capital than Beijing can add. There’s no stimulus to speak of here. Money goes where it’s treated well, and if the markets have decided that Chinese producers are overextended, no amount of meddling by Chinese bureaucrats will alter this truth. All the leadership can do is slow economic growth by subsidizing what market actors will not.

Conversely, assuming the markets are wrong about growth prospects in China, rest assured that globalized financiers will know this far sooner than the high functionaries in Beijing. Put more simply, if there’s abundant potential for progress in China, copious funds from around the world will be there to finance it. Government cannot make great what isn’t.