Health officials are calling on British Columbians to treat each other with compassion while also encouraging those around them to follow public health orders and help get the second wave of COVID-19 under control.

“The COVID-19 pandemic has put a strain on all of us, but with kindness, compassion and care for those around us, we will see it through,” they said in a written statement.

“Most people in B.C. are doing the right thing, and we encourage everyone, in turn, to support friends and family to also continue to take precautions in their daily lives.”

As of Wednesday, there are 232 people in B.C. hospitals with COVID-19, including 63 in intensive care, out of 4,150 active cases across the province.

On Wednesday, Dix said the province is expecting to receive 50,000 doses of the Pfizer vaccine this week, after it was delayed by a couple of days due to cold weather.

“We’ve delivered all of the immunizations really that we can in B.C. given the supply that’s been provided by the federal government,” said Dix, adding: “Hope is on the horizon.”

Confused about the COVID-19 rules for school kids in Ottawa? A guide to screening, isolating and testing – Ottawa Citizen 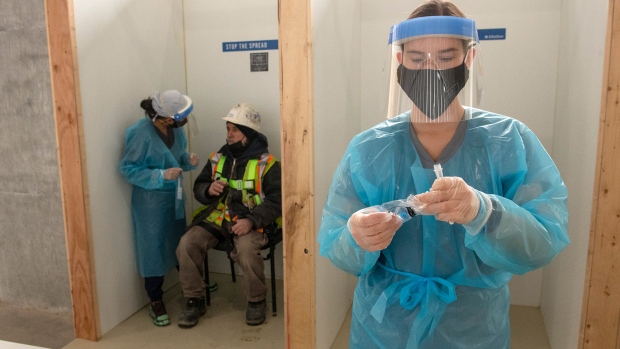 The seven-day rolling average of daily cases now stands at 1,063, down from 1,084 on Wednesday.

Provincial labs processed 65,643 test specimens in the past 24 hours, generating a positivity rate of at least 2.1 per cent.

Another 42,723 specimens remain under investigation.

Using whole genomic sequencing, labs also confirmed another 92 new coronavirus cases involving variants of concern over the past day, bringing the total confirmed number of variant cases to 678, including 644 cases of the more highly contagious B.1.1.7 variant.

Ontario’s Ministry of Health says the number of patients in hospital due to COVID-19 fell over the past 24 hours.

They say there were 649 patients in hospital receiving treatment on Thursday, down from 668 on Wednesday. Of those, 281 were in intensive care and 183 were breathing with the help of a ventilator.

But data from Critical Care Services Ontario obtained by CP24 on Thursday showed there were 326 people in intensive care on Thursday.

The Ministry of Health says 784,828 doses have now been administered, and 268,100 people have completed a full two-dose inoculation.

Going forward, growth in the number of full inoculations may slow as Canadian provinces move to space out doses of COVID-19 vaccines up to four months apart.

Future vaccine modifications that respond to new variants of COVID-19 to be made available quickly to Canadians without compromising safety, efficacy or quality

OTTAWA, ON, March 4, 2021 /CNW/ – Health Canada announces new guidance issued today by the Access Consortium—a coalition of regulatory authorities from Canada, the U.K., Australia, Singapore and Switzerland. The guidance, developed by Health Canada in consultation with its Access partners, lays out what information regulators would need to approve any modifications to authorized COVID-19 vaccines, should virus mutations make them less effective at preventing COVID-19. With this guidance, authorized COVID-19 vaccines that are modified in response to new variants will need to be reviewed and authorized.

According to the guidance, vaccine manufacturers would need to provide evidence that the modified vaccine produces an immune response in a sufficient number of people, but clinical studies would not be needed since they do not add to the regulatory understanding of a vaccine’s safety, efficacy or quality.

This is because researchers are now better able to measure protection by looking at antibodies in the blood following vaccination, reducing the need to determine whether people in a trial develop the disease. This would reduce the length of time needed for a modified vaccine to be ready for use.

Along with data on the immune response, the vaccine manufacturer would also be expected to provide evidence of the modified vaccine’s safety and quality. Data from the original clinical trials and the ongoing studies on real-world use in millions of people can be used to support any decision by the regulators.

This approach is based on established regulatory processes used for seasonal flu vaccines, for which annual modifications are needed to match the strains circulating each year.

The Access Consortium began as the Heads of Agencies Consortium in 2007. Health Canada was a founding member of this group. The Consortium’s goal is to maximize international cooperation between partners in the Consortium, reduce duplication and increase each agency’s capacity to ensure patients have timely access to high quality, safe and effective therapeutic products, including vaccines, drugs and medical devices.

The European Union is planning to extend its export authorization scheme for COVID-19 vaccines to the end of June, two EU sources told Reuters on Thursday, in a move that could reignite tensions with countries who rely on shots made in the EU.

The mechanism was set up at the end of January as a reaction to vaccine makers’ announcements of delays in the deliveries of COVID-19 vaccines to the EU.

Read more:
EU to propose ‘digital green pass’ as proof a person has been vaccinated

It is due to expire at the end of March, but the European Commission wants to extend it through June, the two officials said.

“The Commission will propose its extension into June. And that was greeted by the member states with approval, not necessarily enthusiasm, but there is a feeling that we still need that mechanism,” one senior EU diplomat said.

The second official added that at a meeting with EU diplomats on Wednesday, many countries supported the measure, including heavyweights Germany and France.

The EU Commission was not immediately available for comment.

Italian Prime Minister Mario Draghi has also called for sanctions on companies that do not respect their contractual obligations with the EU.

When the EU’s export control mechanism was introduced in late January it triggered an outcry from importing countries who feared their vaccine supplies might have been hampered.

Under the scheme, companies must get authorization before exporting COVID-19 shots and may have export requests denied if they do not respect their supply commitments with the EU.

However, the EU has authorized all requests for export since the scheme’s debut on Jan. 30 to Feb. 26, which amounted to 150 requests for millions of shots to 29 countries, including Britain, the United Arab Emirates and Canada, an EU Commission spokeswoman said.

She added, however, that at least one request was withdrawn by an exporting company. She declined to elaborate.

Export requests mostly concern the Pfizer-BioNTech vaccine which is manufactured in Belgium. AstraZeneca and Moderna shots have also been exported from the EU.

Since Jan. 30 more than eight million vaccines were shipped from the EU to Britain, a third EU source said.

Britain has so far prevented the export of AstraZeneca vaccines to the EU, using a U.K.-first clause in its supply contract with the Anglo-Swedish firm, EU officials have said.