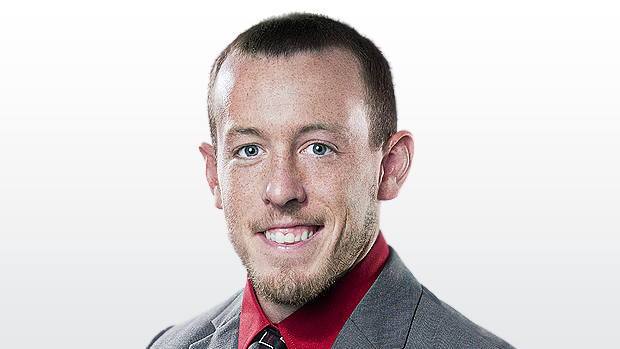 During what would prove to be Peel’s final game, he was caught on a hot mic discussing a planned penalty call against the Nashville Predators.

An embarrassing moment for the league and for Peel, unquestionably. The veteran official was caught saying the quiet part out loud, and the league is understandably concerned about the perception of fairness and integrity within the sport. Doubly so considering recent ventures into the world of sports betting.

But the aftermath of Peel’s removal may end up being the bigger issue for the league. There are two important pieces to this discussion – the first being how “fairness in officiating” is adjudicated, and the second being what the league envisions from its officiating teams.

On the first point, let’s be perfectly clear: NHL officiating in the modern era is set up to balance penalty calls. The moment you go down that path is the moment you start to lose integrity in the rule book.

Balancing entertainment and game flow with good-faith officiating is a battle I think everyone is sympathetic to, but it is obviously paradoxical for the league to have a formalized rule book that is only intermittently enforced.

There are plenty of ways to illustrate this. We can start with a very simple example – consider the first two penalties called in every regular-season game this season, non-offsetting, and the order in which they were called. 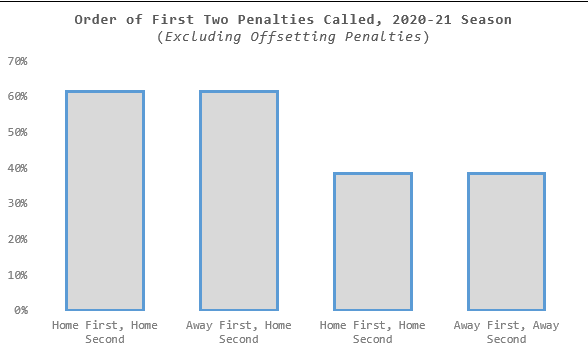 It matters not whether a team is home or away. If your team drew the first penalty, you have a greater than 60 per cent chance at taking the second penalty, creating immediate balancing. If your team took the first penalty, you have a less than 40 per cent chance at drawing the second penalty. This is not a sampling of data from 10 or 20 years ago – we are talking exclusively about the 2020-21 season in this data set.

What becomes apparent very quickly is that the theme of NHL officiating is to balance out penalty calls. Michael Lopez, who has done extraordinary work in this area over the years, showed an important secondary effect. In the event officials have to make consecutive calls against the same team, the incentive to find a corresponding neutralizing penalty increases: 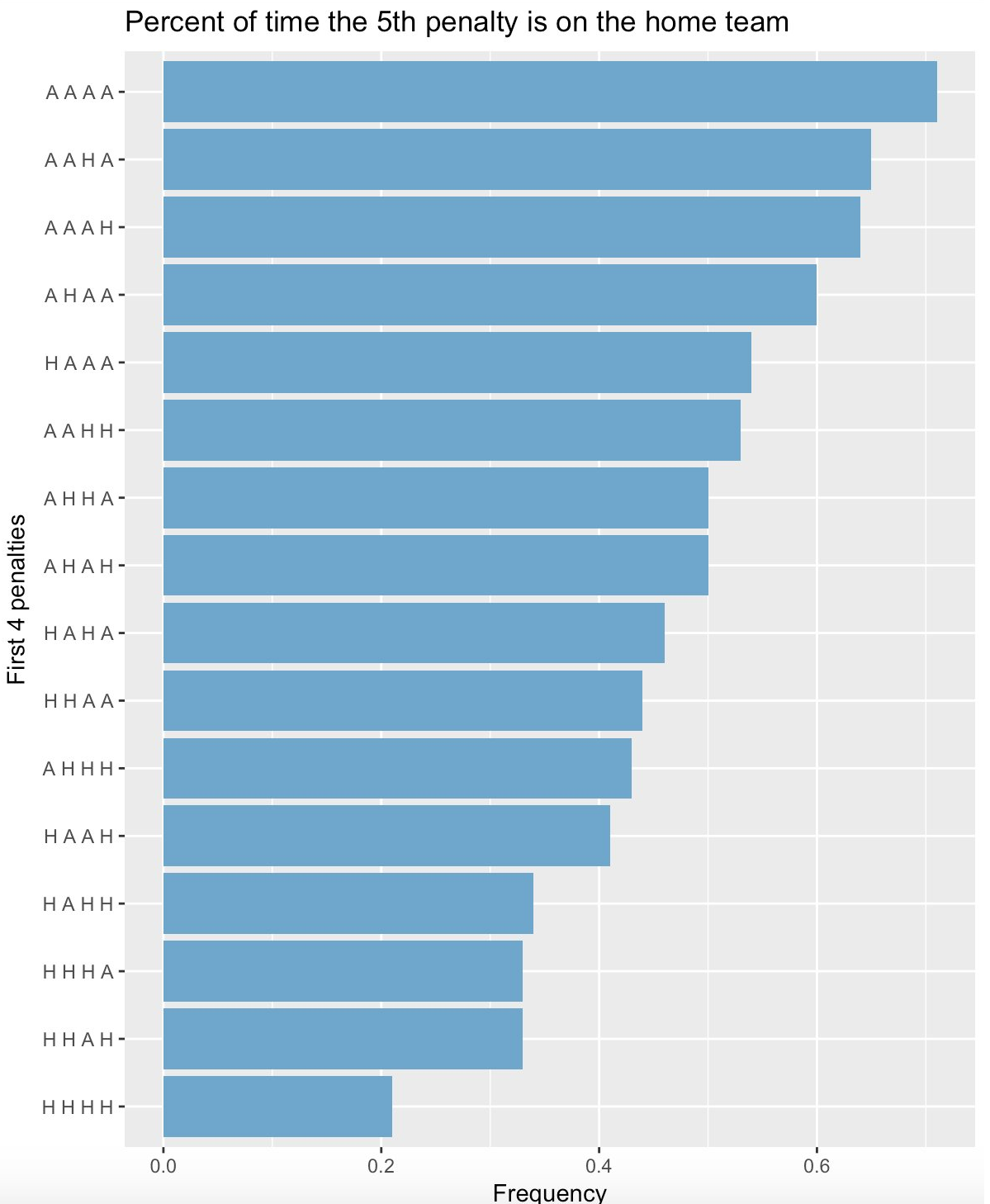 Game management through balanced penalty calls is not theory, it is fact. Previous calls bias what the next call will be, and there is a compounding effect as penalties accumulate on one of the two teams.

That brings us to the second, and perhaps more important question. Should we care, and did Peel really do anything wrong?

Johnson: The conversation about ‘game management’ is necessary and overdue

TSN Hockey analyst Mike Johnson and TSN Hockey Insider Frank Seravalli join James Duthie to discuss the Tim Peel incident, and whether or not this should be the starting point for a greater conversation about how NHL games are being refereed.

This is not a situation of league officials going rogue and merely trying to make their job easier – in fact, I have no doubt that everyone involved is trying to strike the right balance on this issue.

The reality is this type of game management strategy is tacitly accepted by the league. TSN’s Bob McKenzie pointed out that Peel was not fired, will still continue to be paid, and that the NHL may not have an appetite for changing policy on how games are officiated.

Following onto that, TSN Hockey Insider Darren Dreger noted that the caretakers of the sport are reticent to marginalize officiating judgment as a factor in the sport, a bearish signal for something like increased video review.

To that end, it’s impossible to be frustrated with Peel – the only differentiating factor between Peel and his officiating colleagues is that his comments went public, and the league had to react. But absent Peel no longer working games, what really will change?

It seems to me that game management through officiating is here to stay in the NHL, for better or worse. There are no doubt benefits to this type of approach – game flow may improve, and plausibly empty arguments about officiating bias are reduced.

But it’s not without cost. The NHL rule book almost feels mythological at this point – a general guide to what constitutes a penalty, but not one seriously employed in practice. And because of that, the integrity of the rule book comes under fire, and so too do the officials in their futile attempts to enforce the rules on the ice.

This is a highly complex problem for the league, one that will invariably rise again to the Board of Governors level. Maybe the answer will still be that implied fairness is the single most important factor to maintain. It’s unfortunately coming at the cost of the rule book itself, which seems headed for a reckoning.

Toronto Maple Leafs goaltender Petr Mrazek exited after the second period of a 3-2 loss to the Ottawa Senators on Thursday with what the team called a groin injury. The team had no further update on his status after the game.

Mrazek went down awkwardly on the final shot of the period from Ottawa’s Victor Mete, then hobbled down the tunnel at the end of the period. Mrazek made 26 saves but allowed three first-period goals. Jack Campbell came on for the Leafs in goal to start the third period.

Mrazek, 29, was making his debut with the Leafs after signing a three-year deal in the offseason.

Of course the epic National League Division Series between the Los Angeles Dodgers and San Francisco Giants would finish in controversy.

The Giants’ Wilmer Flores struck out on what many believed was a blown check-swing call by first base umpire Gabe Morales. The out preserved the Dodgers’ 2-1 victory in Game 5 on Thursday, allowing the team to advance to the National League Championship Series against Atlanta.

The chances of a Giants rally appeared dim at the time. The count was 0-2, there were two outs, a runner on first, and three-time Cy Young Award winner Max Scherzer was pitching. Not to mention that Flores had never gotten a hit off Scherzer before, the San Francisco Chronicle noted.

But the anticlimactic ending to the momentous playoff clash between the historic rivals angered fans. Reporters and Major Leaguers, including the New York Mets’ Kevin Pillar (a former Giant), chimed in, too.

Check out the reactions of what some called “the check swing heard round the world.”

This article originally appeared on HuffPost and has been updated.

The undefeated Arizona Cardinals have added another weapon to their arsenal.

The Cardinals, who are the only 5-0 team in the NFL, acquired three-time Pro Bowl tight end Zach Ertz from the Philadelphia Eagles on Friday for cornerback Tay Gowan and a 2022 fifth-round draft pick.

Ertz played with the Eagles since they selected him in the second round of the 2013 NFL Draft. He set an NFL record for most receptions by a tight end in a single season with 116 catches and also had a career-high 1,163 yards during the 2018 season. Ertz, who was selected to the Pro Bowl three consecutive years from 2017-19, caught the game-winning touchdown during Super Bowl LII to help the Eagles defeat the New England Patriots 41-33 and capture their first Super Bowl.

“Zach Ertz built a special legacy in Philadelphia,” Eagles chairman and CEO Jeffrey Lurie said in a statement. “Talented, tough, and passionate, he helped to establish our team’s culture and played a vital role in our success over the years.

“Zach created so many memories that will live on forever, from setting numerous franchise and league records, to reaching across the end zone for the game-winning touchdown in our first-ever Super Bowl championship. He will always be a member of the Eagles family, not only because of what he accomplished on the field, but also because of the wonderful person, dedicated leader, and exemplary role model that he was for nine seasons in Philadelphia. We wish Zach and Julie nothing but the best.”

The 30-year-old Ertz has 18 receptions for 189 yards and two touchdowns in six games this season. Philadelphia lost 28-22 Thursday night to the Tampa Bay Buccaneers with Ertz hauling in a touchdown catch.

The Cardinals play the Cleveland Browns on Sunday.

Bill Clinton to remain in hospital overnight, his health is improving -spokesman

Apple worker says she was fired after leading movement against harassment