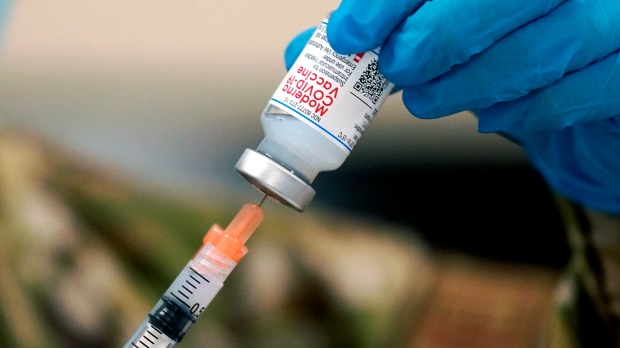 REGINA —
Saskatchewan’s first doses of the Moderna COVID-19 vaccine will be sent to northern Saskatchewan, the province announced Wednesday.

Health Minister Paul Merriman said the vaccine will be administered to long-term care home residents and staff and other priority health care workers.

The Moderna vaccine is easier to transport and ship, making it an easier option for northern Saskatchewan.

The province said 4,900 doses of the the vaccine arrived in Saskatchewan on Wednesday.

“Initially this will be going to the far north central and far northwest parts of the province,” Dr. Saqib Shahab, Saskatchewan’s Chief Medical Health Officer, said. “This is where we have had high numbers of cases and high test positive rate.”

Dr. Shahab said the prioritization for the Moderna vaccine includes both Indigenous and non-Indigenous remote communities in the north.

“There’s ongoing communications with local leadership to facilitate notification of clinic dates, locations at the community level and information about vaccine safety and efficacy, as well as radio spots in English, Cree, Dene and Michif,” Shahab said.

The government anticipates the Moderna vaccine will begin being administered in the weeks of Jan. 4 and 11.

As of Dec. 29, Saskatchewan has administered 2,942 doses of the Pfizer COVID-19 vaccine.

Of the initial 1,950 doses delivered to Regina, 1,834 have been administered. The province said the remaining vaccines will be given to long-term care staff at Regina Pioneer Village and Santa Maria care homes.

A COVID-19 outbreak was declared at the Santa Maria care home on Dec. 29. There are four positive cases between staff and residents.

In Saskatoon, 3,900 doses of the Pfizer vaccine were received on Dec. 21, along with an additional 975 this week. A total of 1,108 doses have been administered to date.

Prince Albert will be receiving its first doses of the Pfizer vaccine on Jan. 4.

The province said priority health care workers will start to receive the vaccine upon delivery of the doses.

Further deliveries of the Pfizer vaccine will begin in Saskatchewan in January, with 6,825 doses expected to be delivered during the weeks of Jan. 11, 18 and 25.

Merriman said the province is looking for clarity from the federal government on how many vaccines Saskatchewan will be receiving moving forward.

The province said there are currently five ultra-low temperature freezers in place in Saskatoon, Regina and Prince Albert, which are used to store the Pfizer vaccine. Another four freezers are expected to be delivered.

With an expected limited supply of vaccine doses available in early 2021, Dr. Shahab said the general public will likely not have access to the vaccine until at least the midpoint of the year.

“Supplies are very limited in January, February and March, and they are being directed to the persons who are most vulnerable,” he said.

Shahab however said he is hopeful there will be more supplies of both the Pfizer and Moderna vaccines starting in April and May. He added that additional options, such as the AstraZeneca vaccine that was approved in the U.K. on Wednesday, would also bring Saskatchewan closer to a wide-spread rollout of vaccines.

“We hope to see that vaccine available – as well as potentially other products available – especially starting in April, and that’s when I think there’ll be broader supply,” Shahab said.

“That’s when the vaccine will be opened up to younger age groups with underlying health conditions, and then to the general population. I would estimate June, July onward.”