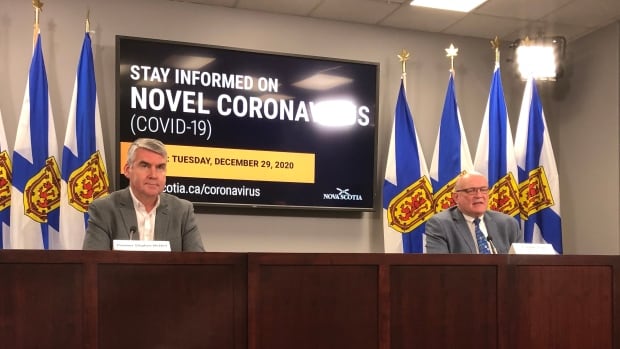 Nova Scotia’s chief medical officer of health said Tuesday he is encouraged by the continued low number of COVID-19 cases in the province, but reminded people they must stay home if they feel sick after an uptick in potential exposures in recent weeks.

“In a couple of our recent cases, people kept going to work and were going out in the community even while they had symptoms,” Dr. Robert Strang said.

“So I have to take some time today to stress how important it is for people who feel unwell, even if they think they have mild cold symptoms, that they need to stay home or go home quickly.”

He urged anyone with symptoms to isolate from other people and do an online self-assessment to get tested.

Strang also asked employers to ensure staff can stay home if they feel sick or if they have been to a location where there’s an exposure notice and require isolation until they get a test result.

Nova Scotia reported two new cases of COVID-19 on Tuesday and one person is now in hospital.

Strang said 33 new cases have been identified since the last briefing on Dec. 21. On Monday, Nova Scotia reported a combined total of 13 new cases of COVID-19 between Dec. 25 and 28.

Of that total, 18 have been close contacts of known cases, 10 have been travel related and five are still under investigation.

There are currently 30 active cases in Nova Scotia.

Nova Scotians have ‘stepped up’

Strang said the low daily case numbers are encouraging and makes it appear that Nova Scotians “stepped up” to follow the protocols over the holidays.

But he did say the next week will be critical to determine whether or not cases will spike in Nova Scotia.

New household gathering limits across Nova Scotia that came into effect ahead of the holidays require gatherings to be limited to 10 people total, including household members. Strang also said Tuesday he heard reports some households were doing multiple, rotating groups of 10, which is against the rules.

Nova Scotia RCMP issued one ticket in the past week. A woman in Aylesford, N.S., was fined $697.50 on Dec. 26 for failing to comply with orders under the Emergency Management Act.

Halifax Regional Police did not issue any summary offence tickets in relation to gatherings over the Christmas holidays.

Strang said if case numbers continue to be low into January, he and the premier will consider lifting COVID-19 restrictions that were extended earlier this month.

Canada halted flights from the United Kingdom early last week after a new strain of the coronavirus was found in southeast England.

“We know that there are many strains of the coronavirus already. A new one is not actually unexpected,” Strang said at a briefing last week.

The new variant has been identified in Ontario, British Columbia, Quebec and Alberta. Strang said as of Tuesday, there is no evidence that the new variant is in Nova Scotia.

Strang said vaccinations were paused over the holidays but clinics are operating once again.

So far, 2,290 Nova Scotians have been vaccinated.

Nova Scotia is expected to receive 3,700 doses of the Moderna vaccine this week.

Cases in the Atlantic provinces

When will you be eligible for a COVID-19 shot? Ontario lays out plan for mass vaccination campaign – CBC.ca