NEW YORK — Don’t ask Jewish philanthropist Ronald S. Lauder to choose a favorite from his vast art collection. He can’t. That’s because for the past several decades he’s collected only those pieces he really, really likes.

When acquiring a piece, Lauder, the youngest son of the cosmetics giants Estée and Joseph Lauder, uses what he calls the “Oh-My-God Formula.”

“It goes like this: There is the ‘Oh,’ which means that when I see the piece, it is just not that important. Then there is the ‘Oh My,’ which means it’s a good piece, just not one of the artist’s best works. But then, there is the very rare ‘Oh My God,’ which is one of the artist’s truly great pieces,” Lauder wrote in an introduction to “The Ronald S. Lauder Collection” exhibition catalog for an exhibition of a few of his favorite things at New York’s Neue Galerie.

“Those are the pieces, the Oh My God works of art, that I have collected over the course of 65 years. I will note here that an Oh My by a great artist will always remain just an Oh My. But an Oh My God (or OMG in today’s parlance) by a lesser artist could make that person a great artist someday.”

The public can now see some of Lauder’s OMG pieces at the Upper East Side’s Neue Galerie, which Lauder founded in 2001. In honor of the museum’s 20th anniversary, 500 pieces of Lauder’s personal collection are on display through February 13, 2023. 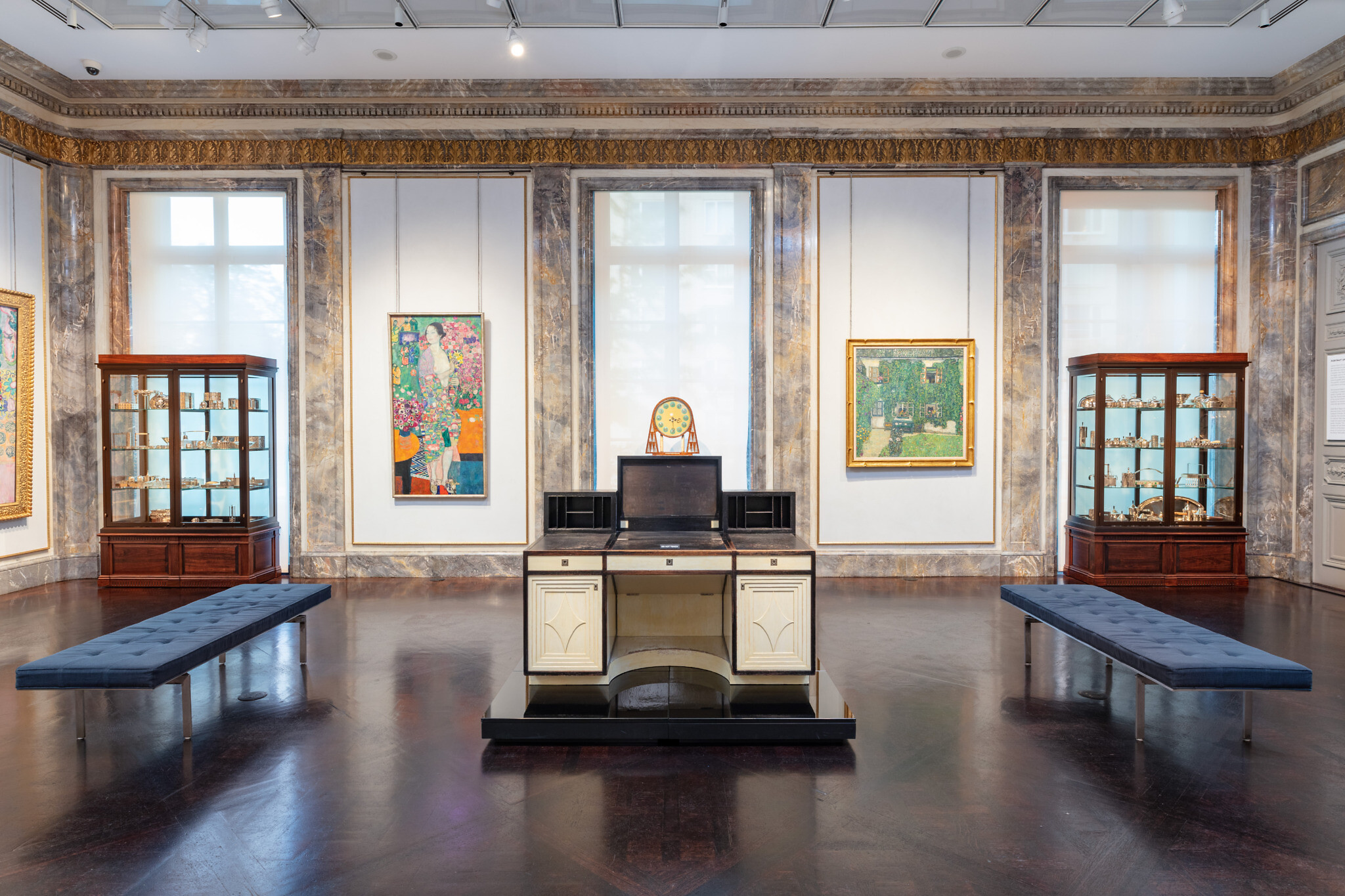 The collection of the 78-year-old former ambassador to Austria during the Reagan administration and current president of the World Jewish Congress is as diverse as it is impressive. There are several sterling silver kiddush cups, masterworks of Greek and Roman sculpture, and a number of Italian 13th- and 14th-century gold-ground paintings. 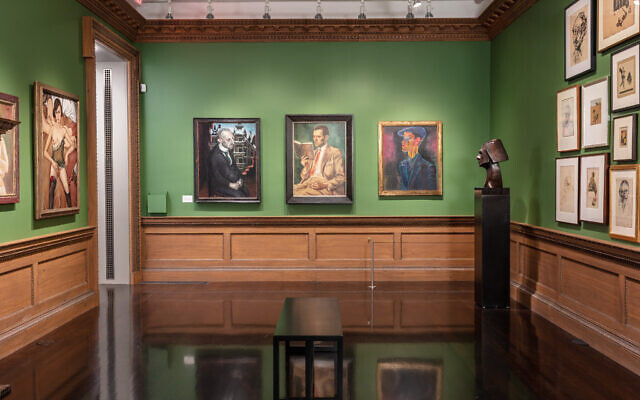 Beyond the dizzying array of treasures, what makes this show unique is the pains the museum took to transform its two gallery floors into a space evocative of Lauder’s home.

“He lives with his art and so we re-recreated his rooms. He, and we, invite the public,” said Neue Galerie director Renée Price.

“It’s a very eclectic and highly personal collection that reflects his lifelong passion and pursuit of art. There is nothing that equals this. It’s a once-in-a-lifetime exhibit,” said Price, nodding toward the gallery in which Medieval suits of armor stand sentinel. 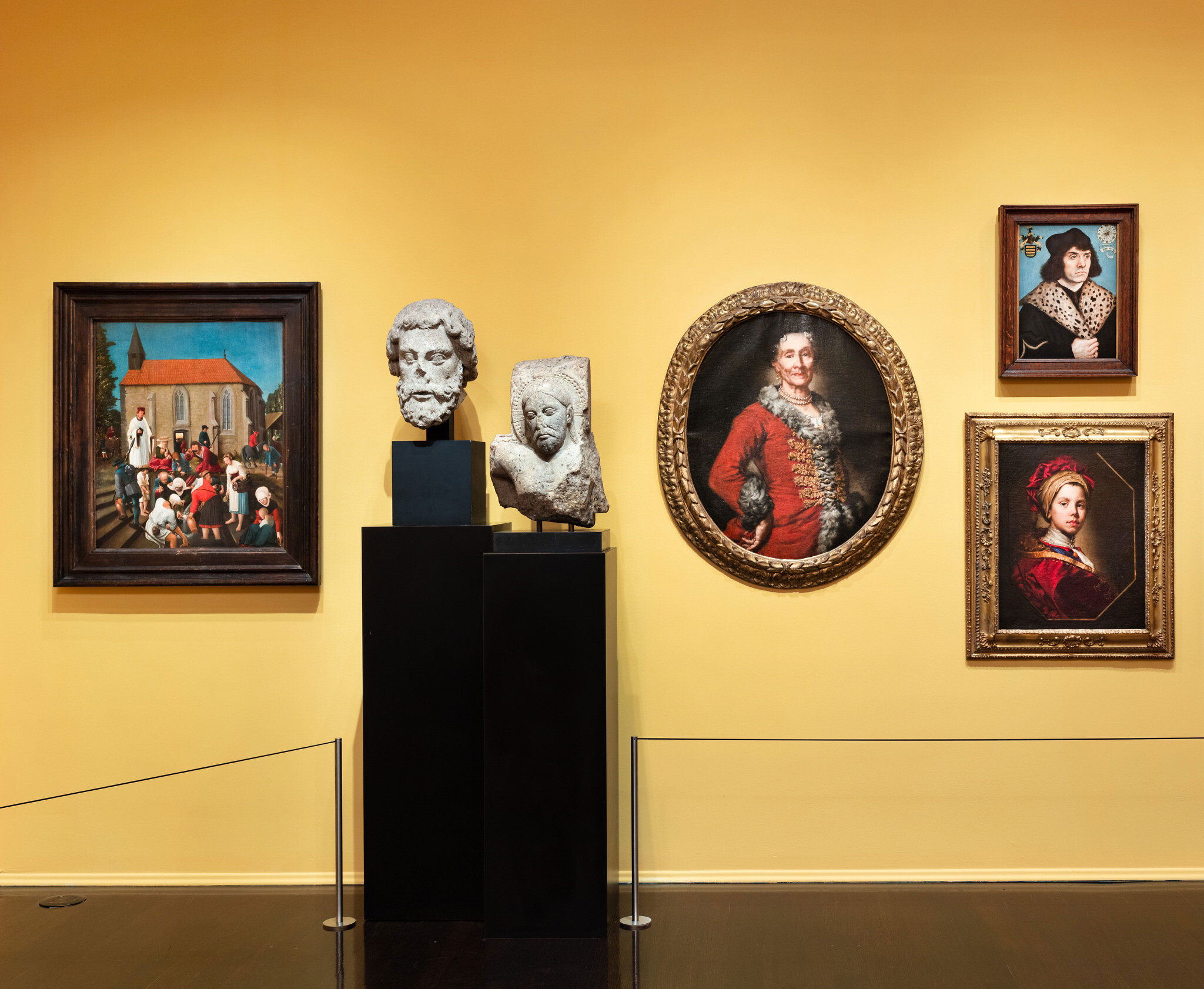 As one of the foremost collectors of Medieval and Renaissance arms and armor in the world, Lauder donated nine objects from his collection to the Metropolitan Museum of Art in December 2020. On display now at the Neue Galerie are complete suits of armor, shields, and mail shirts as well as daggers, crossbows and swords.

In one gallery, the wall is painted the exact shade of yellow as in his home. In another, one of the paintings Lauder treasures most — Erich Heckel’s 1908 “Bathers in a Pond” — hangs above an intricately carved wooden mantle. The mantle and the similarly carved wainscotting and molding in the room are reproductions of those in Lauder’s living room. 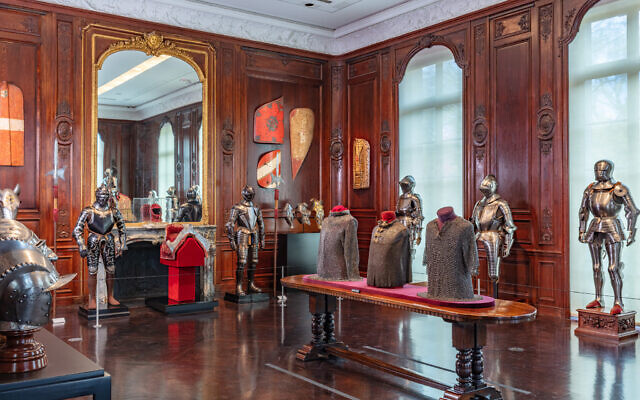 The knights who say ‘NY’

The exhibit was one of the museum’s more challenging. Because the Gilded Age mansion has no freight elevator, several pieces were hoisted through the building’s narrow windows. It’s no surprise that crowds gathered on the sidewalk and watched as medieval suits of armor and giant bubble-wrapped marble busts seemed to float through the air.

Since its wrought iron doors first opened, the museum has held nearly 50 shows highlighting Austrian and German art of the 20th century. However, the museum is best known for Gustav Klimt’s “Portrait of Adele Bloch-Bauer I,” which occupies a permanent space just past the sweeping staircase. 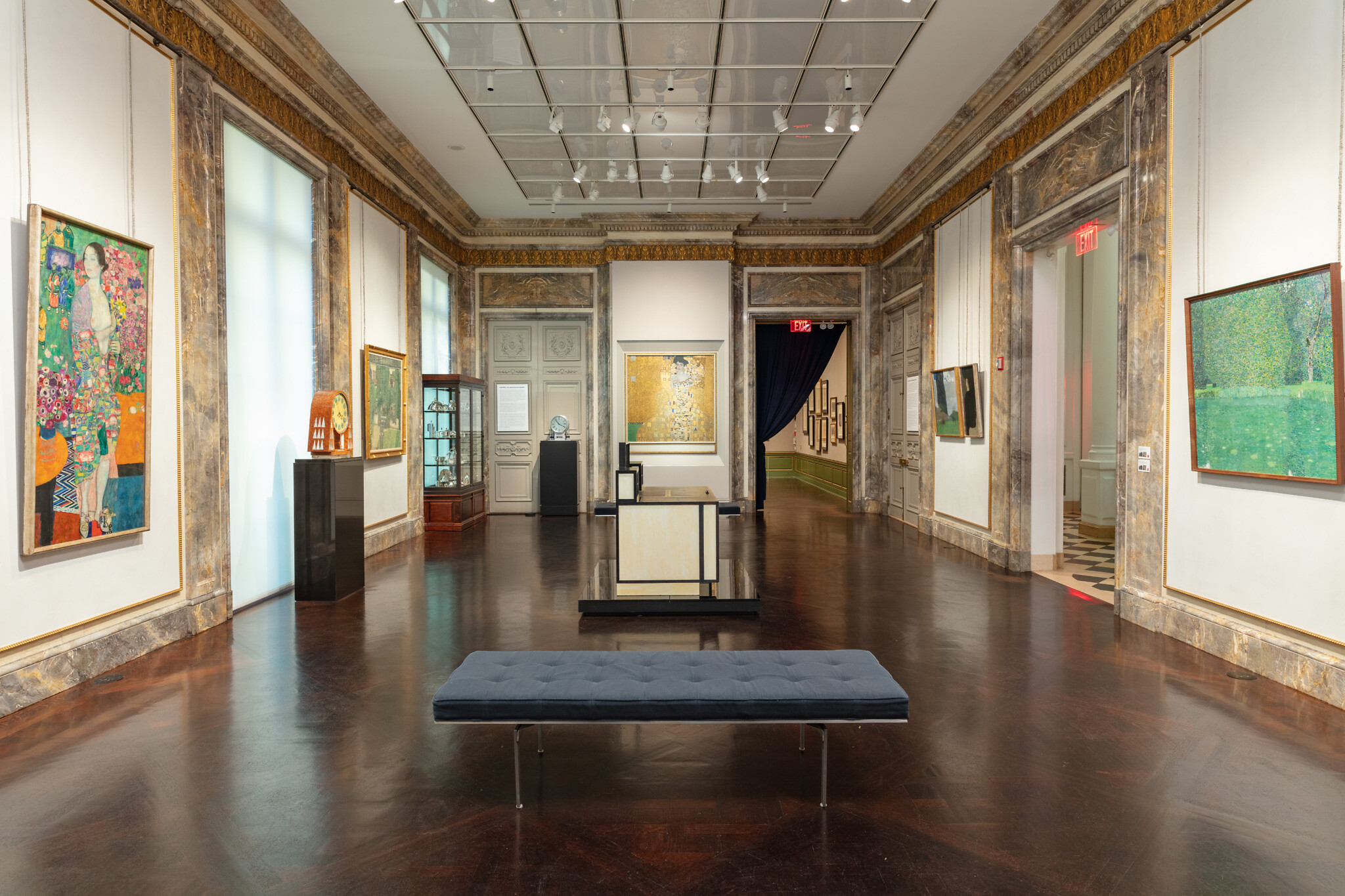 One of the most interesting pieces in the exhibition might not be an actual work of art — rather it’s the replica kunstkammer, or art cabinet, which holds an assortment of objects, including Jewish ritual objects such as a havdalah spice box and a Torah breastplate. The cabinet is fashioned after the one Lauder designed for his own home.

A creamy white-marble statue of Hermes from the second century CE occupies a corner designed to look like Lauder’s private office. Nearby is a head of a Greek goddess, dated 150 BCE. It normally sits on Lauder’s Art Deco walnut desk, which here in the exhibit has been left bare save for the Alberto Giacometti table lamp. 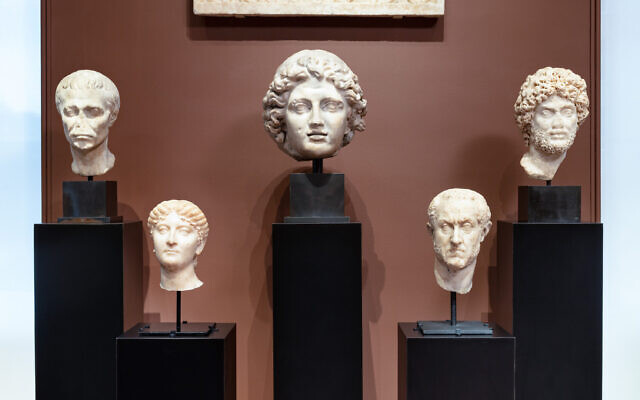 It is perhaps the small, corner gallery devoted to memorabilia from Lauder’s favorite film “Casablanca” that is as unexpected as it is relatable.

“As Time Goes By” performed by the pianist Dooley Wilson plays softly, and repeatedly, in the background. A bejeweled brass lamp sits atop a table, both of which are movie props for Rick’s Café. The original passports designed for actors Ingrid Bergman and Paul Henreid hang on the wall next to their transit papers. Among the dozens of framed vintage posters is one of Ingrid Bergman wearing an ice-blue silk gown and pink gloves. 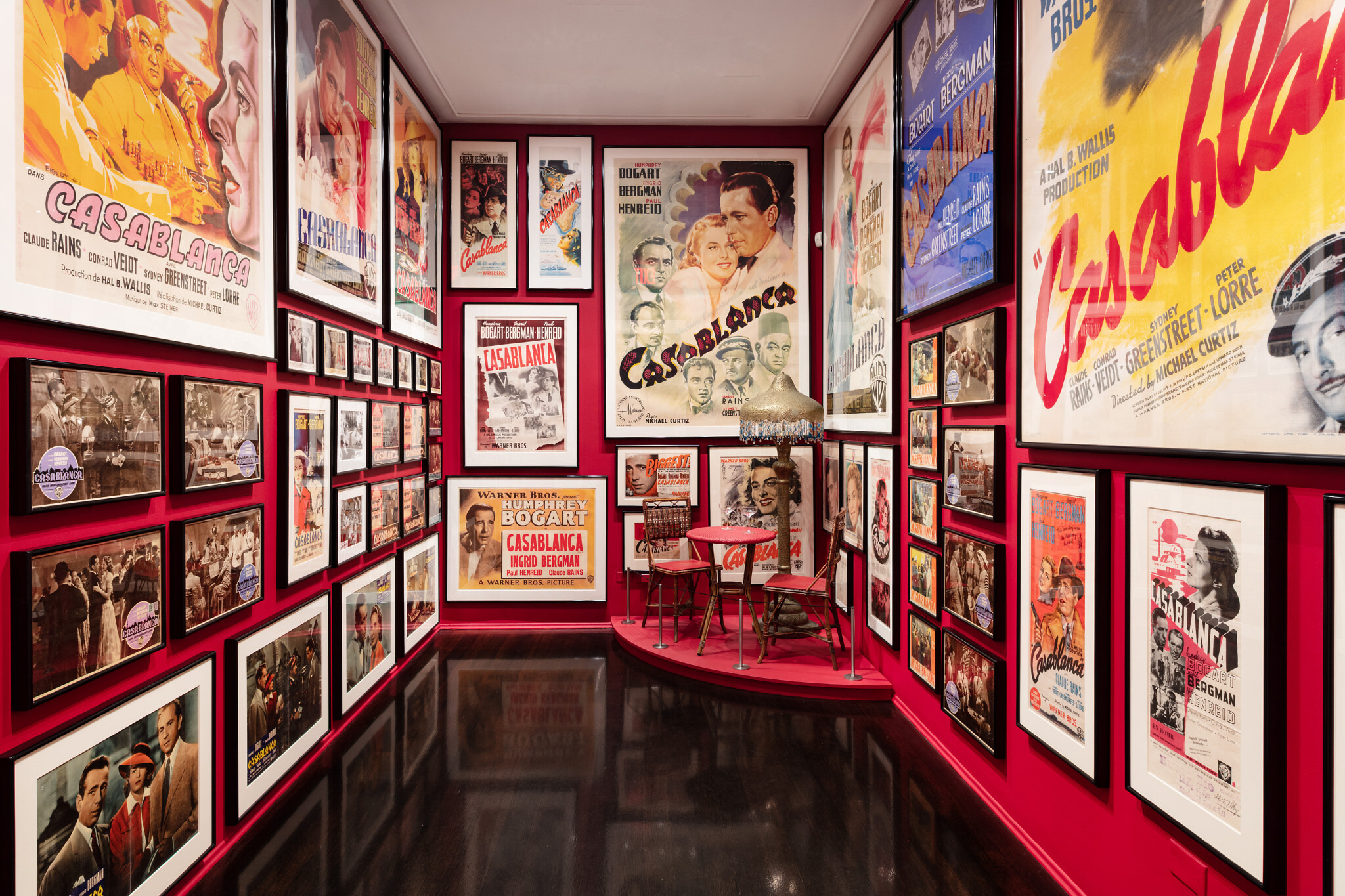 “I took them to see this work, their mother. They saw the passports. But to them it is just their mother,” Price said.

A Nightmare Face Is Haunting AI Art, And There’s A Reason We Shouldn’t Look Away