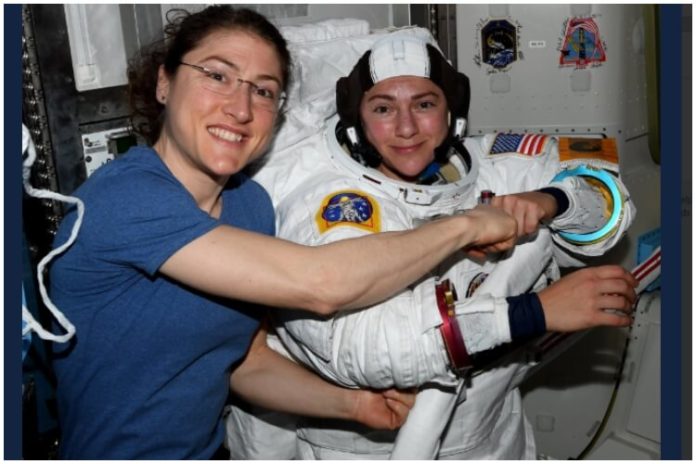 After making history last October by being the first women to walk in space, Jessica Meir and Christina Koch have opened 2020 with their second mission outside the International Space Station.

Meir and Koch left the station for the second time shortly before 7 a.m. EST last Wednesday with the goal of replacing the batteries for the solar panels on the outside of the ISS, CNN reported.

Despite an incident with the video camera on Koch’s hull, which resulted in a 30-minute delay in a mission scheduled to a long six hours, Meir and Koch proceeded to replace the nickel-hydrogen batteries with new lithium-ion batteries that store the energy generated by the solar panels in the station’s port shell, according to the American Space Association.

Meir is an astronaut, marine biologist, and physiologist with a long history of research on emperor penguins in Antarctica, and previously served as an assistant professor of anesthesia at Harvard Medical School at Massachusetts General Hospital in Boston. She followed a post-doctoral research in comparative physiology at the University of British Columbia.

After serving as an aquanaut on the NASA Extreme Environment Mission Operations 4 (NEEMO), she made her first space trip on September 25, 2019. She is expected to return to Earth in the spring.

Her first space trip was on March 14, 2019 to the ISS as a Flight Engineer, and she later joined Meir in the first all-female spacewalk.

According to NASA, since December 2019, Koch has been the woman who has spent the most time in space.

Prior to launching to the space station in September, Meir told Space.com: “I would absolutely love to be the first woman on the moon. That would be my ideal mission. It is time for us to go back to the moon, and I think that we will be able to do that in the near future and I would love to be the one on that mission.”

And it looks like her dream will come true.

Between NASA, U.S. commercial spaceflight companies, and other international partners like the European Space Agency (ESA), the Japan Aerospace Exploration Agency (JAXA), and the Canadian Space Agency (CSA), they have designed the so-called Artemis program, a plan in development to put the first woman on the moon by 2024.

A Second Planet May Have been Found Orbiting Proxima Centauri! And it's a Super Earth. – Universe Today 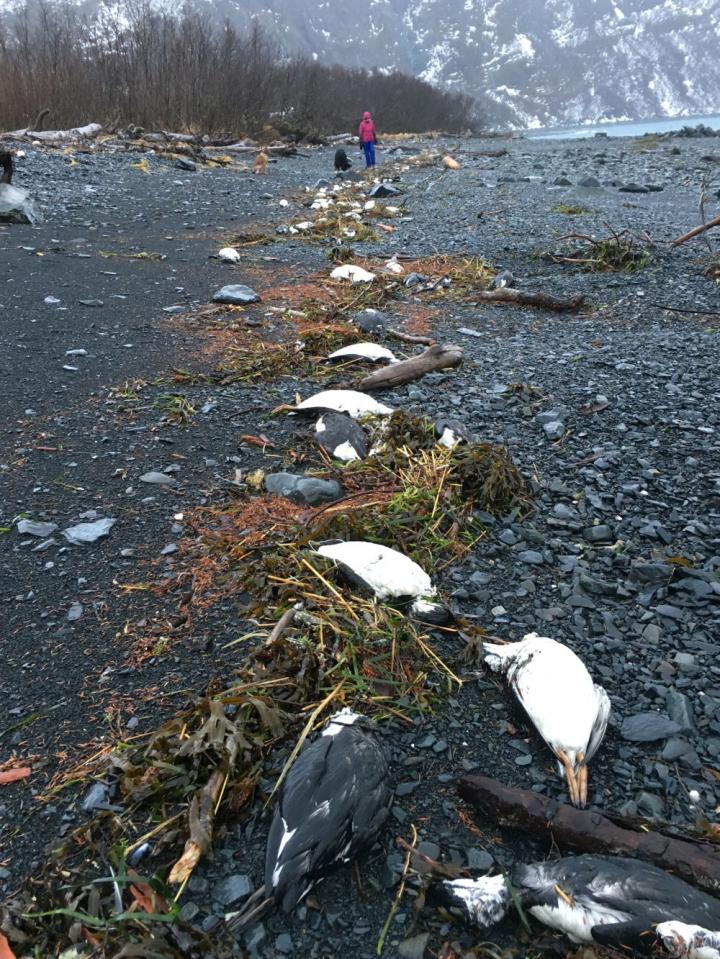 A new report suggests a warm “blob” of water could be behind the mass starvation of a North Pacific seabird.

According to a report published in the science journal PLOS ONE, about 62,000 dead or dying common murres washed ashore between California and Alaska between summer 2015 and spring 2016. Carcass recovery brings the death estimate up to around one million in total.

The report says there’s nothing to suggest the emaciated birds died from anything other than starvation.

Additionally, no murre chicks were born at breeding colonies between 2015 and 2017.

Researchers linked the deaths to a “large mass of unusually warm seawater” known as the “Blob” and the strong El Niño that followed, creating a “severe marine heatwave” stretching from California to Alaska between 2014 and 2016.

In a statement, authors said the mass deaths “raise a red-flag warning about the state of marine ecosystems on the continental shelf of western North America.”

The study links to previous research suggesting that warmer marine temperatures reduce both the quantity and quality of phytoplankton – reducing the health and numbers of fish who eat them and increasing the metabolic needs of larger fish that compete with murres for food.

Researchers hypothesize that the warm water ultimately led to the birds’ mass starvation and lack of reproduction.

The murre die-off revealed a major disruption in marine food webs, with alarming declines not only in murres, but in other seabirds, commercial fish and great whales between 2016 and 2019.

Researchers say they are only beginning to understand “the mechanisms and full magnitude of effects of the 2014-16 heatwave, and what it portends if such heatwaves become stronger and more frequent, as predicted.”

Powerful gases ripping a hole in the ozone

They were once abundant, in our hairsprays, bug sprays, and refrigerators. And then scientists figured out these substances ripped a hole in the ozone layer, leading to a 1987 plan to phase them out that over time would be agreed to by every country in the world.

More than three decades later, researchers have made a new discovery.

Ozone-depleting substances do more than just gnaw at Earth’s protective layer. They’re also greenhouse gases, so they contribute to the planet’s overall warming by trapping heat, too. And now we may know just how much these substances have contributed to Arctic warming, thanks to a study published in the science journal Nature on Monday.

Between 1955 and 2005, ozone-depleting gases caused half of Arctic climate change (and a third of overall global warming), the study finds. This is primarily due to their heat-trapping qualities, not their ozone munching. The Arctic has seen rapidly melting sea ice for years and is warming faster than the rest of the world. When the sea ice melts in the Earth’s northernmost region, sea levels rise across the globe leading to potential flooding.

Between 1955 and 2005, ozone-depleting gases caused half of Arctic climate change.

These ozone-depleting gases include chlorofluorocarbons (CFCs), which we’ve been cracking down on since the global agreement known as the Montreal Protocol was finalized 33 years ago. CFCs, which include propellants and refrigerants, have been around since the 1920s and 1930s. Their popularity peaked in the late 20th century and have been on the decline since the Montreal Protocol.

To quantify the climate impact of ozone-depleting gasses, scientists from Columbia University, the Institute for Atmospheric and Climate Sciences in Switzerland, and University of Toronto used climate models to run a variety of simulations. In one, they tested what would happen if stratospheric ozone and the pesky gases that hurt it stayed at 1955 levels. Research on CFCs’ climate impacts beyond ozone depletion is scant, even though they can trap more heat than climate change poster child carbon dioxide, the study notes.

The study’s findings not only give an extra gold star to the much-acclaimed Montreal Protocol, but also provide a bit of hope when so much climate change research focuses on doom and gloom.

“Our findings also have implications for the future because the phase-out of [ozone-depleting substances], which is well under way, will substantially mitigate Arctic warming and sea-ice melting in the coming decades,” the study explains.

Indeed, Cecilia Bitz, a climate scientist at the University of Washington in Seattle who was not involved in the study, told Nature, “It’s a very important paper because it has a little shred of optimism.”

Don’t get too excited just yet, though. More studies that replicate these findings need to be done to corroborate the evidence, Bitz, the study authors, and other scientists say.

Then there’s also the problem of CFCs still being used despite global crackdowns. For example, China is struggling to tamp down on illegal CFC production. In addition, we’ve just begun to tackle hydrofluorocarbons (HFCs), which air conditioner and refrigerator manufacturers turned to when they were blocked from CFCs, on a global scale. HFCs are less harmful for the ozone than CFCs, but like their loathed counterpart, they’re more powerful than carbon dioxide when it comes to trapping heat.

And to be clear, weakening the ozone is still a very bad trait to have. Scientists expect it’ll take another 50 years before the ozone hole over Antarctica is back to its 1980 level.

Sorry to be a downer.

Researchers named the dinosaur Wulong bohaiensis, which translates to “a dancing dragon.”
The dinosaur was about the size of a raven but double its length with a long, bony tail. Its entire body was covered with feathers, complete with two plumes at the tail’s end.
Despite its small size, it had a fierce, narrow face and a mouth full of sharp teeth. Like a bird, it had small, light bones and wing-like forelimbs. And there were also a number of feathers on its legs.
The fossil was initially discovered in the fossil-filled Jehol Province a decade ago by a farmer and was placed in China’s Dalian Natural History Museum.
Researchers, including Ashley Poust, a postdoctoral researcher at the San Diego Natural History Museum, later analyzed the fossil (at the time, Poust was still a student at Montana State University). 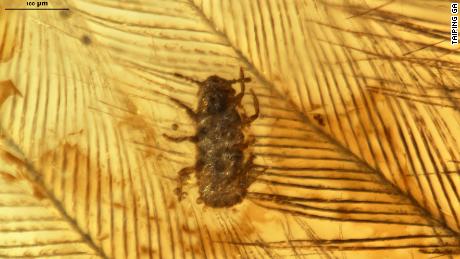 The findings were published last week in the journal The Anatomical Record.
“The new dinosaur fits in with an incredible [range] of feathered, winged animals that are closely related to the origin of birds,” Poust, the study’s author, said. “Studying specimens like this not only shows us the sometimes surprising paths that ancient life has taken, but also allows us to test ideas about how important bird characteristics, including flight, arose in the distant past.” 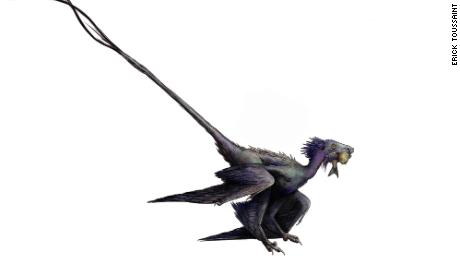 This dinosaur was a juvenile when it died, according to its bones, but its feathers resembled that of a mature adult. This suggests that the feathers grew quickly, unlike modern birds, which take time to grow their mature feathers.
“Either the young dinosaurs needed these tail feathers for some function we don’t know about, or they were growing their feathers really differently from most living birds,” Poust said. 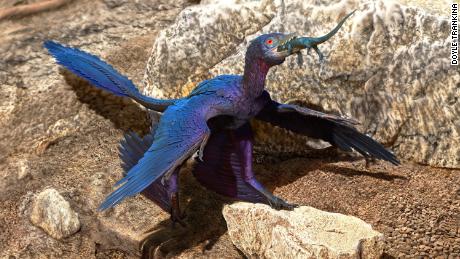 The dinosaur was an early relative of Velociraptors, which lived 75 million years ago. Its contemporaries would have been Microraptors, small feathered dinosaurs that resembled birds.
The researchers actually sliced into several bones from the fossil and studied them with microscopes to understand the different regions of the skeleton. They also compared it to a close relative that also appeared more mature, known as the Sinornithosaurus. 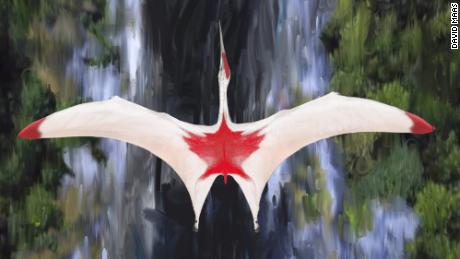 Surprisingly, that dinosaur was also still growing when it died. The researchers said that histology, or cutting up the bones, was the only way for them to truly know the life stage of the dinosaurs when they died. 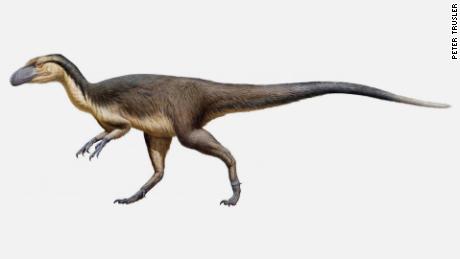 “We’re talking about animals that lived twice as long ago as T. rex, so it’s pretty amazing how well-preserved they are,” Poust said. “It’s really very exciting to see inside these animals for the first time.”
Fossils from the Jehol Province have painted a portrait of the diverse life that once flourished there. It’s an area in northeastern China full of exceptionally preserved fossil discoveries that has been studied for the past 90 years. 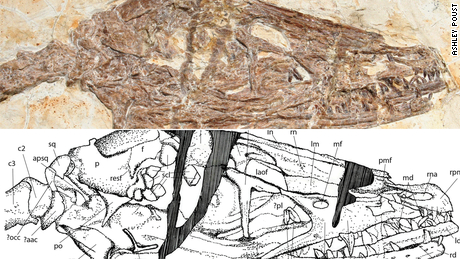 Researchers learned that birds, pterosaurs and bird-like dinosaurs all lived in the environment at the same time. This is also when flowering plants initially began to flourish.
“There was a lot of flying, gliding and flapping around these ancient lakes,” Poust said. “As we continue to discover more about the diversity of these small animals, it becomes interesting how they all might have fit into the ecosystem. It was an alien world, but with some of the earliest feathers and earliest flowers, it would have been a pretty one.”

In with Galaxy S20, out with the Galaxy S11? This is Samsung's chance to shake up the brand – CNET