Today the financial markets with the exception of bonds plunged. The Dow Jones industrial average lost almost 3000 points in trading. Analysts are citing the global COVID–19 (coronavirus) as the primary trigger for this selloff. There is also the question as to whether or not central banks including the Federal Reserve have any tools still available to help the global economy avoid a major recession.

Make no mistake this particular selloff presents a very different set of circumstances than the 2008 financial crisis. During the financial crisis the Federal Reserve along with other central banks were able to enable the global economy to begin a recovery. Most used quantitative easing as their primary tool to do this. This technique involves lowering interest rates and making money available by increasing the liquidity of banks.

During this crisis the actions of the Federal Reserve had the exact opposite effect. Rather than calming investors by lowering rates to near zero after the Fed’s surprise announcement yesterday. Instead of holding its planned FOMC meeting on March 18, it had an emergency rate drop of a full percentage point. 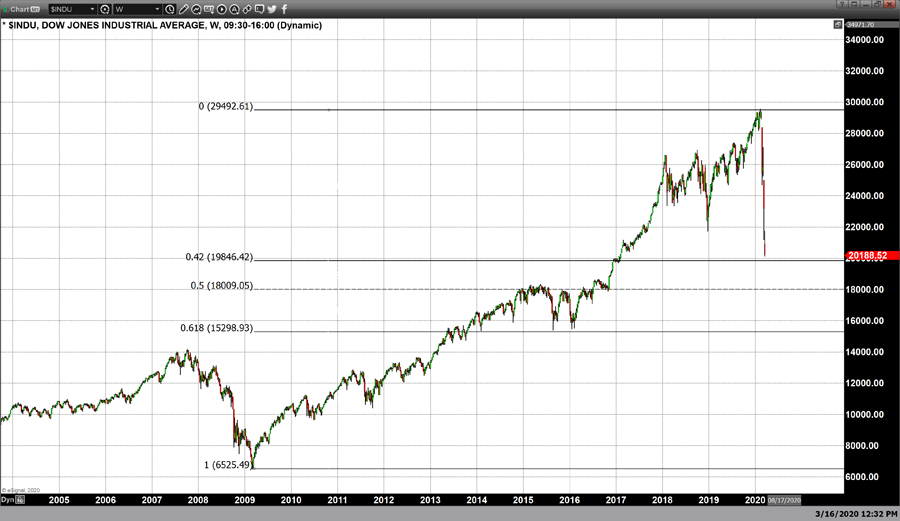 Monday morning in Australia gold gapped higher on the open. Considering that gold closed on Friday at $1517, and opened at $1563. At the same time Dow futures were predicted to open down by 2000 points and it seemed at first that there was a decoupling of the tandem downside correction evident in both gold and stocks. That was short-lived at best as gold turned south trading to a low of $1495.50 in trading today.

Gold is currently trading at $1508.80, which is $22 higher than the New York close. As reported in MarketWatch, Chintan Karnani, chief market analyst at Insignia Consultants said that traders were “exiting everything which is giving them profit, with a technical selloff triggered when gold fell below $1,500. However, gold’s inability to fall below key support at $1,440 resulted in short covering and subsequent buying in gold, including good physical demand in Asia.” 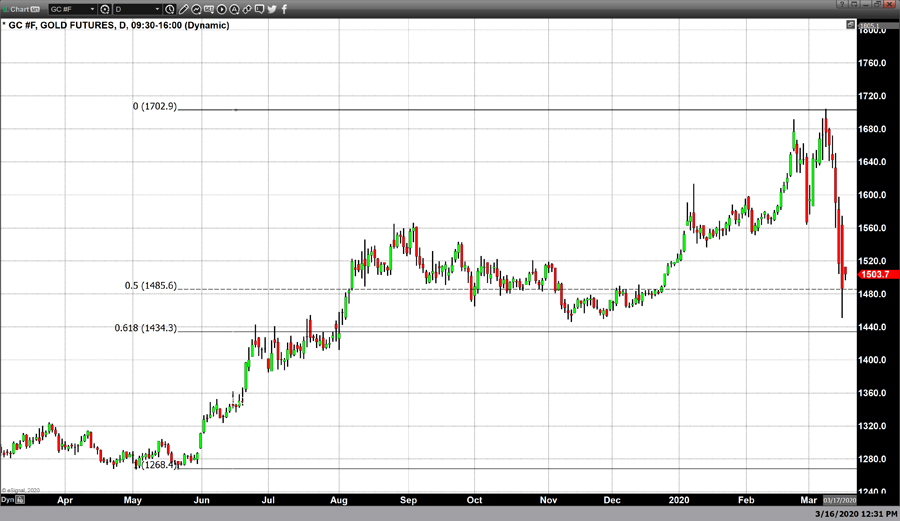 At some point this author believes that investors will once again begin to move investment capital back into a safe haven asset such as gold, however that is not occurring at this time.

For those who would like more information simply use this link.

Wishing you as always, good trading,

TORONTO —
No winning ticket was sold for the $70 million jackpot in Friday night’s Lotto Max draw.

However, five of the 19 Maxmillions prizes of $1 million each were won by ticket holders in the Prairies and in Newfoundland and Labrador.

The jackpot for the next Lotto Max draw on Apr. 7 will again be $70 million and there will be 20 Maxmillions prizes up for grabs.

I have been warning since January that the long-term ramifications of the ongoing coronavirus (COVID-19) outbreak on the oil industry could be significant and long-lasting. In March we saw significant impacts on price and demand. What we don’t know is how long this crisis will last.

But, I believe we are in the midst of an existential crisis for the oil industry as we know it. This will not be the same industry after this dark period ends. Only the strongest companies are going to survive the financial pain that lies ahead.

There are many variables in this equation, and they are constantly changing. Demand is plummeting, production and prices are following, and Saudi Arabia and Russia are jockeying to hold onto market share.

Vitol, the world’s largest independent oil trading company, has said that oil demand could slump as much as 20 million barrels per day (BPD) over the next few weeks, which would lead to an annual decline of 5 million BPD. Vitol CEO Russell Hardy said “It’s pretty huge in terms of anything we’ve had to deal with before.”

Goldman Sachs said it expected March demand to be down 10.5 million BPD, followed by a further decline to 18.7 million BPD in April. The company noted that this deep plunge would be beyond the ability of OPEC to counteract: “A demand shock of this magnitude will overwhelm any supply response including any potential core-Organization of the Petroleum Exporting Countries output freeze or cut.”

Related: U.S. Shale Ready To Fire Back In The Oil Price War

Meanwhile, benchmark prices have temporarily settled in the lower $20s, but local prices have dropped even further. In a story that warned of the largest idling of oil wells in the past 35 years, Oilprice.com reported that last week some crude prices were trading in the $1 per barrel range.

The oil and gas sector has been crushed, and there will be a great deal of collateral damage. It’s hard to see when the sector will emerge from this crisis, or what the supply situation will be when we do. But it’s inevitable that there will be fewer players in the sector when this crisis ends.

Late on Friday, Scotiabank said it would reduce credit card interest rates to 10.99% for personal and small business clients who have been approved for, or seek, payment deferrals.

Earlier, in separate statements, TD Bank said it will cut credit card interest rates by 50% for customers experiencing hardship, and Royal Bank said it will reduce the charges by the same extent for clients receiving minimum payment deferrals.

National Bank will allow credit card customers to defer minimum payments for up to 90 days and reduce annual interest rates to 10.9% for these clients, it said.

CIBC too will reduce interest rates to 10.99% on personal credit cards for users who request to skip a payment, Canada’s fifth-largest lender said. (https://reut.rs/3aHZM9Q)

Last week, Prime Minister Justin Trudeau said his government had urged banks to help alleviate the burden credit card interest rates placed on Canadians. Friday’s moves are the latest in a raft of measures announced by the banks to ease the impact of the coronavirus pandemic on customers.

Canada’s six biggest banks unveiled a mortgage-relief plan two weeks ago to allow homeowners to defer or skip mortgage payments for up to six months as businesses come to a grinding halt due to the pandemic.

National Bank said it will refund additional interest accrued on the deferred mortgage payments. The lender will also waive fees for transfers and stop payments on checks and pre-authorized debts, and will not charge overdraft fees on checking and high-interest savings accounts, it said.

Since the mortgage-relief plan was announced, the banks have received nearly half a million requests that have been completed or were being processed.