Alibaba Group Holding Ltd. warned that the coronavirus responsible for killing more than 1,300 people in China is exerting a fundamental impact on the country’s consumers and merchants, and will hurt its revenue growth in the current quarter.

Alibaba, the first major Chinese technology corporation to report results since the epidemic emerged in January, said the virus is undermining production in the economy because many workers can’t get to or perform their jobs. It has also changed buying patterns with consumers pulling back on discretionary spending, including travel and restaurants.

The Chinese e-commerce giant made the comments after reporting strong financial results for the quarter that ended in December. Revenue surged a better-than-expected 38% to 161.5 billion yuan ($23.1 billion), while net income rose 58% to 52.3 billion yuan.

But Chief Executive Officer Daniel Zhang and Chief Financial Officer Maggie Wu were clear about the fallout from the deadly virus on employees, suppliers and merchants. Many merchants that work with the company have not been able to return to normal operations because of a shortage of employees. Alibaba’s U.S.-listed shares slid as much as 2.4% Thursday morning.

“The epidemic has negatively impacted the overall China economy, especially the retail and service sectors,” said Wu in a conference call after the results. “While demand for goods and services is there, the means of production in the economy has been hampered by the delayed opening of offices, factories and schools after the Lunar New Year’s holiday.”

Asked about the affect on Alibaba, she voiced caution about giving estimates because it’s only halfway through the March quarter.

“Overall revenue will be negatively impacted,” she said, adding that the hit to growth could be “significantly” negative.

Zhang said that they are seeing relatively large changes in buying patterns. While food delivery is growing, areas like clothing and electronics are running into logistical problems. He warned that the core e-commerce business suffered a negative impact in the first two weeks after the holiday. Restaurant orders and travel bookings have also taken hits.

“It will present near term challenges to Alibaba’s businesses across the board,” he said on the conference call, adding that there will also be opportunities.

Alibaba is rolling out special programs to support merchants, including lowering the fees it charges and providing subsidies for delivery personnel. Zhang said the company is trying to keep its own staff safe, including having many work from home.

Zhang added that more workers are going back to work in Beijing, Guangzhou and Shenzhen. Many logistic companies are also recovering their capacity in the past 12 days.

Already, China’s most valuable corporation has struggled to sustain growth rates during an economic slowdown in its home market, and is now grappling also with the uncertainty of the coronavirus outbreak. While widespread home confinement is spurring demand for online services from grocery delivery to office apps to streaming entertainment, the disease is snarling nationwide transport and threatens in the long run to dent the consumer spending Alibaba depends on.

The disruption to Alibaba’s business from the virus “may be worse than feared,” wrote Bloomberg Intelligence analysts Vey-Sern Ling and Tiffany Tam in a report. “Alibaba’s sales may contract in its core China retail marketplaces and local services business in the coming quarter even if the coronavirus outbreak subsides, as logistic and production disruptions faced by merchants could take time to resolve.”

This week, the company declared a waiver of some service fees for merchants on its main direct-to-consumer Tmall platform to help those struggling with the fallout from the outbreak. That may further depress the top-line in 2020.

“It was always thought that Alibaba’s core commerce revenue would have the brakes applied to it either because of China’s macroeconomic condition, or slower user growth,” said Michael Norris, research and strategy manager at Shanghai-based consultancy AgencyChina. “But what this coronavirus event forces us to do is to consider a third scenario – where Alibaba’s revenue will take a hit from a reduction in merchant fees and advertising spend.”

Alibaba has shed 1.4% of its value since a broader Chinese selloff began in January, underperforming arch-rival Tencent Holdings Ltd., which as a mobile gaming and social media operator is better shielded in the short run from the epidemic. 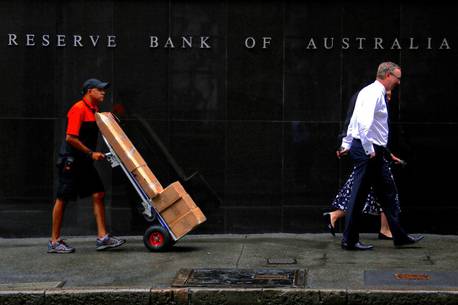 SYDNEY (Reuters) – Australia’s central bank held rates at all-time lows on Tuesday and sounded less gloomy as the economy gradually re-opens during what is likely to be the worst quarter since the Great Depression.

The Reserve Bank of Australia (RBA) left rates at 0.25% at its monthly policy meeting in a widely expected decision, and said the “accommodative approach will be maintained as long as it is required.”

In a short post-meeting statement Governor Philip Lowe said the RBA was prepared to scale up government bond purchases if needed to ensure three-year yields held around 25 basis points.

Australia’s A$2 trillion ($1.4 trillion) economy is experiencing its biggest contraction since the 1930s in the current quarter but “it is possible that the depth of the downturn will be less than earlier expected,” Lowe added.

A significant decline in new infections, earlier-than-expected easing of restrictions and signs that hours worked stabilised in early May auger well for a recovery.

“There has also been a pick-up in some forms of consumer spending,” Lowe added.

States and territories across Australia have been easing social distancing regulations at differing paces in recent weeks, slowly ending a partial lockdown ordered in March, having largely contained the COVID-19 pandemic.

Australia, which has about 7,200 coronavirus cases, has not reported a death from the disease for more than a week.

The country’s success in containing the virus has sent the Aussie dollar soaring to five-month highs. Yet, that is leaning against monetary stimulus and won’t be welcome by the RBA.

The central bank made no mention of the exchange rate in the statement.

Highlighting the depth of the pandemic-driven global economic downturn and the fallout on Australia, many economists expect interest rates to remain at record lows for at least two more years.

Some are even predicting negative interest rates, though Lowe has ruled it out.

“While we have also become more optimistic about the outlook for the economy in recent weeks, we still expect the unemployment rate to jump to nearly 9% by Q3,” said Capital Economics analyst Marcel Thieliant.

He expects the central bank to announce an expansion of its government bond buying programme at its August policy meeting.

“And we only expect the unemployment rate to fall below 7% by 2022. That would leave it far above the RBA’s estimate of the natural rate of 4.5%, underlining that the RBA will miss its full employment mandate for years to come.”

Other data out on Tuesday showed government spending also added to growth in the March quarter, while companies reported better sales and profits than many expected.

The figures led analysts to upgrade their forecast for first-quarter gross domestic product due Wednesday with some saying the economy might not have shrunk in the quarter as previously feared.

GDP had been forecast to show output contracted 0.3%, the first fall since early 2011.

“But the likely collapse in activity in the current quarter and accompanying impact on the labour market…is a sharp and deep shock through the whole economy with likely lasting ramifications.”

New data from Statistics Canada suggests Saskatchewan was already in a “mild recession” last year, even before COVID-19 and the latest oil shock began pummelling the province.

Saskatchewan’s gross domestic product (GDP), a measure of total economic output, shrunk from $82.2 billion in 2018 to $81.5 billion 2019 after factoring in inflation. That’s a decrease of 0.8 per cent, the worst number of all the provinces. The only other province to see its economy shrink last year was Alberta, which faced a contraction of 0.6 per cent.

Joel Bruneau, head of the economics department at the University of Saskatchewan, said the new data shows the province wasn’t even managing to tread water before COVID hit.

“We’ve averaged negative growth over four quarters, so I would call it a mild recession,” he said.

The data shows that most of the hit to Saskatchewan in 2019 came from goods-producing industries, rather than the service sector. Industrial production was down, as was mining and quarrying, while the energy sector was basically flat.

A group of economists studying how South Korea fought the COVID-19 outbreak without stay-at-home orders found that the country still experienced significant job losses in a pattern similar to that of countries that imposed lockdowns.

The study, from economists at Seoul’s Myongji University, Queen Mary University of London and St. Louis’s Washington University, also suggests that Canada’s slowly reopening economy may not go back entirely to normal as long as the virus is still prevalent.

“At most, half the job losses in the United States and the United Kingdom can be attributed to lockdowns,” the economists argue. Most job losses came from reduced hiring by businesses and a significant amount of non-participation in the labour market, rather than unemployment.

The same types of workers are feeling the effects, whether their country implemented a lockdown or not, the study claims. Less-educated workers, young people, workers in low-wage occupations and the self-employed lost were hardest hit, even when researchers controlled for industry effects that might over-represent these people.

“Lifting of lockdowns may lead to only modest recoveries in employment absent larger reductions in COVID-19 rates,” the paper warns.

The economists looked at labour-market effects in South Korea, where no lockdown was imposed, and compared the economic impact across different areas. One particularly bad local outbreak allowed the researchers to estimate that one additional infection for every thousand people causes a two to three per cent drop in local employment.

“The best way to revive the labour market is to eradicate the virus,” reads the paper by economists Sangmin Aum from the Myongji University in Seoul, Sang Yon Lee from Queen Mary University of London and Yongseok Shin from Washington University in St. Louis.

The study manages to untangle the many different factors in unemployment by concentrating on a localized outbreak in South Korea caused by a notorious event that spiked the transmission rate in the country.

In mid-February, the country had only 30 infections, but “Patient 31” attended a religious gathering in the city of Daegu. Ten days later, the country had more than 3,000 infections almost entirely clustered around Daegu. More than 60 per cent of them were traced back to that single gathering.

South Korea managed to quash the outbreak and maintains one of the lowest death rates in the world, mainly due to widespread testing, a robust contact-tracing regime and comparatively intrusive tracking measures, including monitoring quarantine-breakers with electronic wristbands.

The study is a working paper released for discussion by the National Bureau of Economic Research in the United States before peer review. Although working papers haven’t gone through the rigorous publication process, they are a timely way to compare the results of the COVID-19 outbreak around the world.

Countries that didn’t implement a lockdown have also suffered economic damage from the pandemic due to the disruptions in global travel and trade.

Sweden, which kept most schools, businesses and restaurants open after experiencing its own COVID-19 outbreak, is still expecting its economy to contract by seven per cent this year. Sweden’s exports depend heavily on demand from other countries, many of which went into full lockdowns.