Monday afternoon’s story of Zhùr, an ancient gray wolf pup, drew interest from 320 scientists and others from around the world who signed up for the talk.

It was presented through a video conference hosted by Grant Zazula, an ice age paleontologist with the Yukon government.

Several other scientists who had worked with the Pleistocene carcass or were involved in the research were also part of the video feed, as was Debbie Nagano, a representative of Dawson’s Tr’ondëk Hwech’ïn.

The video conference was the latest in the series of the science talks presented by the Yukon Beringia Interpretive Centre.

Results of the research were published Monday in the Current Biology Magazine.

The pup was named Zhùr, meaning wolf in the Han language.

The 57,000-year-old mummified pup was discovered in the Klondike gold fields by placer miner Neil Loveless in July 2016.

Loveless told the audience as a placer miner, he is no stranger to finding ancient bones from wholly mammoths, steppe bison, ancient horses and such.

But never has he come across the remains of a perfectly mummified animal.

While he was doing some hydraulic mining, he took a walk up the draw they were working at, as he usually does.

Loveless said when he first saw the pup, he thought it was a piece of moss, though upon a closer look he knew it was no piece of moss.

“When you find something like this, it is a totally different ball game,” he said.

Zazula said they suspect the pup was laying alone in its den, with its head resting on its outstretched front paws in typical dog fashion.

It’s likely the remains were frozen underground within weeks, resulting in a perfectly preserved carcass – fur and all.

“It’s a wonderful little wolf pup,” Zazula said. “It’s amazing to have so many people here today who were involved.”

The Yukon paleontologist said having such a well-preserved mummy has amazing powers to shed light on its history.

“When it came out of the permafrost, it looked like it died a couple of weeks ago.”

Judging by the development of its teeth and its size, it was likely around six weeks old and had probably been weened already.

Evidence indicates a substantial part of its diet, and therefore her mom’s diet, came from aquatic sources like fish and perhaps water birds, and not land animals.

The carcass was found in the vicinity of the Klondike River, which has a population of spawning chinook salmon today.

There was no evidence that Zhùr starved to death.

While it has the characteristics of a modern day gray wolf, it is not linked genetically to today’s gray wolves, suggesting there was a period of a regional die-off and replacement of the ancient gray wolves in northern North America.

Genetics show there was an ancient link to gray wolves in Russia and Europe, indicating there was connectivity between Russia and North Amercia with animals moving over the Bering Land Bridge.

So unusual is finding a perfectly preserved mummy of an ancient animal that paleontology professor Julie Meachen of Iowa’s Des Moines University said in her 20 years of studying ice age fossils, Zhùr was the first mummy she has worked with.

Zazula told the audience if they wanted to visit the territory to see Zhùr, it is on display at the Beringia Centre.

“One of the best things of 2020 for me is all this information coming out of the project,” he said.

The project involved academics from several universities in Canada and the U.S.

Zazula said the intent in the post-COVID-19 period is to tour Zhùr through the Yukon communities.

“We really want to make sure people get a chance to see this and have an opportunity to take part,” he said.

Researchers in the Faculty of Science have made an important contribution to new findings about Earth’s magnetic field and its role in shielding our planet from solar wind, the continuous stream of charged particles emanated by the sun.

In the discovery, published in Nature Communications, a team of Alberta-based scientists found that electromagnetic energy originating in the solar wind shows a clear preference to head toward Earth’s northern polar regions rather than their southern counterparts.

The new findings suggest that, in addition to acting as a shield from incoming solar particles, the magnetic field also actively controls how the energy is distributed and channeled into Earth’s atmosphere.

Using information from the European Space Agency’s (ESA)’s Swarm satellite constellation, researchers in the University of Alberta’s Department of Physics analyzed data from electric field instruments (EFIs) designed and operated at the University of Calgary by a team led by Dr. David Knudsen, PhD, and Dr. Johnathan Burchill, PhD, both in the Department of Physics and Astronomy. Lead author Dr. Ivan Pakhotin at the University of Alberta and co-authors at both universities discovered the “surprising” imbalance in how Earth’s magnetic field responds to space weather driven by the sun.

The high-calibre international partnership between the two universities and the ESA reflects the research excellence in space science in Alberta. The University of Calgary has been Canada’s most prolific university-based provider of space instrumentation, with more than 20 instruments developed and launched into space over the university’s 50-plus-year history, according to Knudsen.

While the terms “North Pole” and “South Pole” conjure images of polar bears and penguins, they refer to the north and south poles of our planet’s magnetic field, and loosely line up with Earth’s rotational axis. Earth’s magnetic field is visible in action when the aurora borealis — or northern lights — appear in the northern night skies, the result of its interaction with charged atomic particles from the sun.

While the dancing ribbons of light are a beautiful sight, they’re representative of a constant bombardment of charged particles in the solar wind, and can have significant impacts on some of our most important systems like communication networks and navigation systems (like GPS and satellites). In severe cases, solar storms can cause communication and electrical systems and even satellites to fail.

“Because the south magnetic pole is further away from Earth’s spin axis than the north magnetic pole, an asymmetry is imposed on how much energy makes its way down toward Earth in the north and south,” explains Pakhotin, the paper’s lead author and postdoctoral fellow in UAlberta’s Department of Physics.

While researchers aren’t yet sure what the effects of this asymmetry might be, the findings suggest that it could also point to an asymmetry between the aurora australis in the south and the aurora borealis in the north. Further, they suggest that the dynamics of upper atmospheric chemistry may vary between the hemispheres, particularly when geomagnetic activity is strong.

Knudsen and Burchill specialize in near-Earth space research, and have extensive experience in the development of space instrumentation. Knudsen serves as lead scientist for the EFIs on the Swarm satellites; Burchill has responsible for their operation since launch in 2013.

Each EFI contains two sensors known as thermal ion imagers. Initially developed at UCalgary with support from ESA and the Canadian Space Agency, and built by Ontario-based COM DEV Canada (now Honeywell), the thermal ion imagers use the same technology used in digital cameras — CCD detector technology — to detect charged particles. The sensors then produce precision measurements of ionospheric winds and temperatures. “This information is used to calculate the electric field, an important counterpart to the magnetic field,” Knudsen explains.

Understanding Earth’s electric and magnetic field environment helps scientists design better electrical grids and early warning systems when solar disturbances like mass coronal ejections or solar storms occur and affect Earth. However, the primary motivation of this research is to understand the fundamental behaviour of the charged-particle gases (plasmas) surrounding Earth, and the causes and consequences of the northern and southern lights, key aspects of which remain unexplained.

Swarm’s three satellites return information about how the magnetic field protects Earth from the dangerous particles in solar wind, along with how the field is generated and how the position of Earth’s magnetic north changes over time. 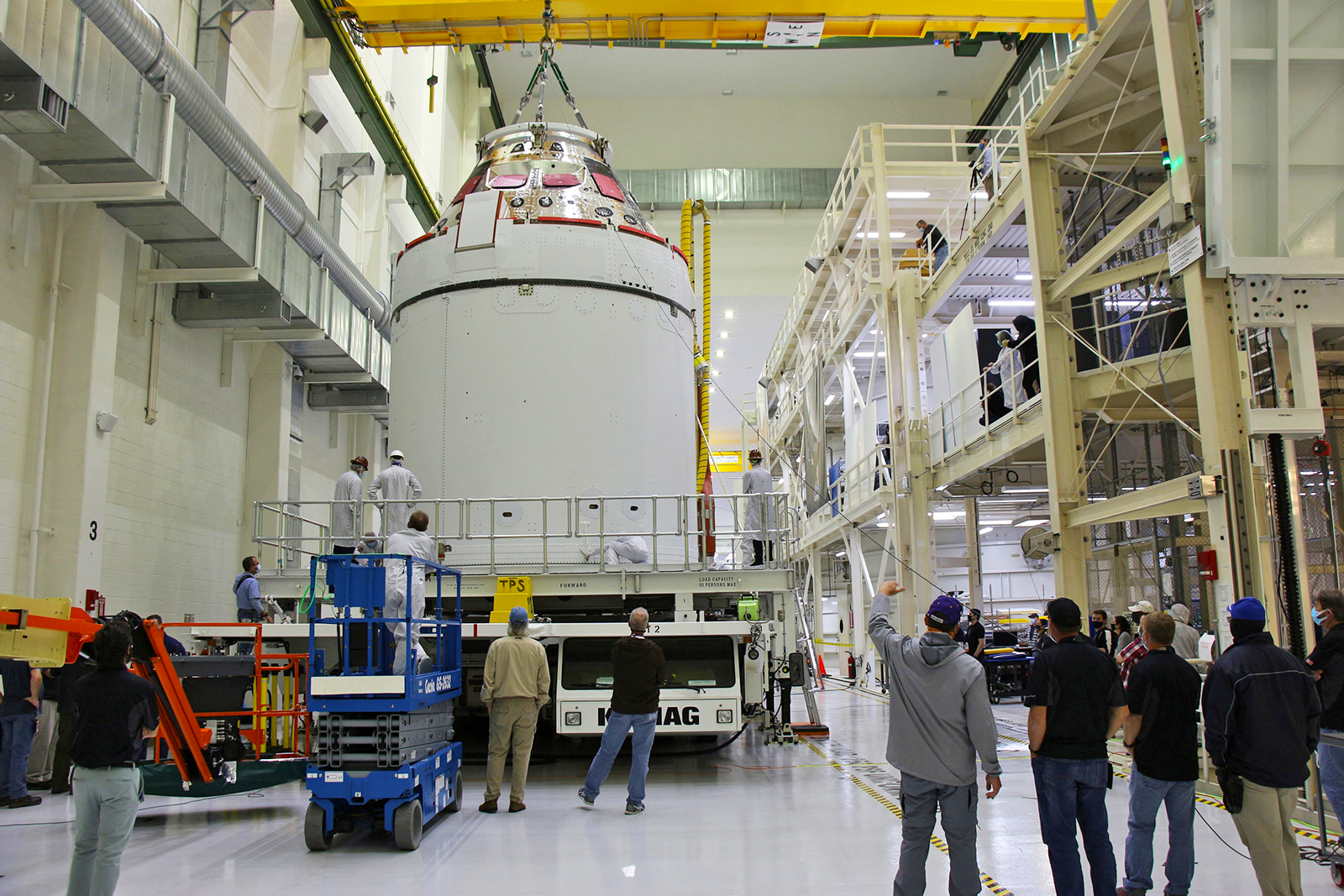 Perseverance lands Feb. 18 , carrying new science instruments and technologies, including the Ingenuity Mars Helicopter on its belly. Perseverance will use a drill on the end of its robotic arm to capture rock and regolith (broken rock and dust) samples in metal tubes, which will be deposited on the surface of Mars for a future mission to collect and return to Earth. The rover will seek signs of ancient life on the Red Planet as a primary goal.

Perseverance was built and managed for NASA by the agency’s Jet Propulsion Laboratory in Southern California .

Participating in the briefing are:

Media who would like to ask questions via phone during the event must provide their name and affiliation by noon EST Tuesday, Jan. 26 , to Rexana Vizza at rexana.v.vizza@jpl.nasa.gov .

Media and the public also may ask questions on social media during the briefing using #CountdownToMars.

To learn more about Perseverance, visit: