Andrew Bailey, head of Britain’s financial watchdog, will be the next governor of the Bank of England, where his top challenge will be navigating any choppy waters during the country’s departure from the European Union.

Treasury chief Sajid Javid, who announced the appointment Friday, said Bailey was the “clear front-runner” to replace Canadian Mark Carney. By the time Carney leaves on March 15, he will have been at the helm for nearly seven action-packed years.

Bailey, a deputy governor under Carney for three years until 2016, “is the right person to lead the bank as we forge a new future outside the EU and level up opportunity across the country,” Javid said.

Bailey will serve an eight-year term. The Bank of England, already an enormously powerful institution within Britain, will play a key role in the country’s first years outside the EU.

Following last week’s big win for Boris Johnson’s Conservative Party in the general election, Britain is due to leave the EU on Jan. 31 and then enter a transition period until the end of 2020. During that time, Britain will be in the EU’s economic arrangements but without a vote as the government seeks to negotiate a new trading relationship with the bloc. As a result, the Brexit uncertainty that marked Carney’s time at the bank will remain for Bailey.

Replacing Carney, the first non-Briton to take the top job at the 325-year-old institution, has been a protracted affair because of Brexit uncertainty and the election. To ensure a smooth transition, Carney has agreed to extend his time at the helm from Jan. 31 for six weeks.

Bailey left the bank in July 2016 to become chief executive at the Financial Conduct Authority. Bailey’s star was thought to have waned largely because of a few recent financial scandals, notably the collapse of investment funds run by Neil Woodford that raised questions over the FCA’s ability to regulate risky funds.

However, he remains well-respected across government and the financial community, largely because of his work during the global financial crisis a decade ago when he helped resolve a series of problems within the British banking sector. He played a key role in the state bailout of Lloyds Bank and Royal Bank of Scotland.

By far the steadiest under fire in the financial crisis. He won’t make waves unnecessarily. But his all round experience will help to steady economic policy at a challenging time for the U.K.– Nick Macpherson,  Treasury’s former top civil servant

Nick Macpherson, who was the top civil servant at the Treasury during those bailouts, said in a tweet that Bailey was “the most able and competent” Bank of England official he worked with: “By far the steadiest under fire in the financial crisis. He won’t make waves unnecessarily. But his all round experience will help to steady economic policy at a challenging time for the U.K.”

Bailey, 60, said it was a “tremendous” honor to be chosen as governor “particularly at such a critical time for the nation as we leave the European Union.”

“I will continue the work that Mark Carney has done to ensure that it has the public interest at the heart of everything it does,” Bailey said.

For his part, Carney said Bailey “brings unparalleled experience” and praised him for his role during the financial crisis.

“Andrew is widely and deeply respected for his leadership managing the financial crisis, developing the new regulatory frameworks, and supporting financial innovation to better serve U.K. households and businesses,” he said.

But Bailey was, according to Javid, the “standout candidate in a competitive field.” 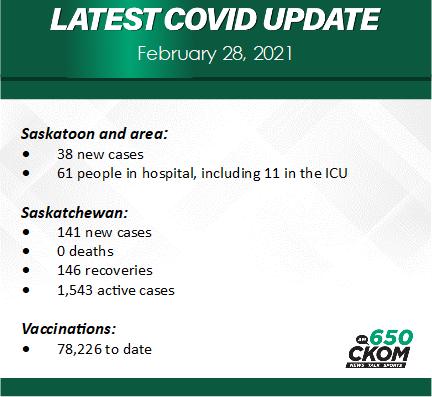 There were no new deaths related to the coronavirus reported in Saskatchewan Sunday.

In a news release, the Ministry of Health revealed that the death toll in Saskatchewan from the virus stayed steady at 385.

There was more positive news, as recoveries slightly outweighed new cases. There were 141 new cases reported, along with 146 recoveries. Those numbers slightly dropped the active case total to 1,543.

The locations for three previously reported cases were discovered to be the Regina (one), northwest (one) and north-central (one) areas.

There are 153 people in hospital across Saskatchewan. Of those, 19 are in intensive care in the Saskatoon (11), Regina (7) and northwest (one) regions.

Vaccinations took another jump Sunday, though not as significantly as Saturday’s record high.

Those doses raised the total number to 78,226. There are 26,418 people in the province who are fully vaccinated, thanks to having received both doses.

Mass COVID-19 vaccinations to begin in Montreal as province ramps up effort – Sudbury.com