A B.C. badger has dipped her toes into the world of art — quite literally.

Bloom, a 13-year-old female American badger, made her painting debut with the help of staff at Kamloops’ B.C. Wildlife Park, where she has lived since being found as an orphan in 2006.

Animal care manager Tracy Reynolds said keepers regularly encourage their animals to paint as a way to keep them stimulated and to create bonds with their human caretakers.

“We just put the paint on the paper, first, in little blobs, and the keeper encourages Bloom to come up on her lap…. then Bloom comes up and just smears it around with her hands.”

The end result is what Reynolds called a “bold” mixture of reds, greens and yellows, “kind of like a Rorschach.”

Reynolds said Bloom was primarily motivated by the food being offered to her while she painted, but thinks she enjoyed the process.

She said feeling the paint is a good sensory experience for the animals.

After consulting with fans on Facebook, the park has decided to auction off the painting to help pay for a new enclosure for another resident: Ranger, a flying squirrel who was found sick and dehydrated in August at an estimated age of four weeks old.

The park hopes to build Ranger a living space that simulates the night during the day and the day during the night so he’ll be active during park visiting hours.

Reynolds isn’t sure how much money Bloom’s painting will raise but hopes it attracts interest from animal and art lovers alike.

“I think it’s a pretty neat conversation piece,” she said.

Arts trailblazers to share stories, lessons on a career in the arts – GuelphToday

A year ago, on a dark October evening, Canadian art lovers got all dressed up, cracked open the Champagne, plated the nibbles and sat down at their computers to pretend they were attending the opening night of an art fair. Art Toronto, the annual fair that normally fills the Metro Toronto Convention Centre with 100 gallery booths and thousands of visitors, tried hard to offer a virtual version featuring viewing rooms and video interviews. There was a certain atmosphere – if you tried equally hard – but without the circulating crowds and the continuous chatter, it didn’t really feel like a fair.

This year, the chatter may be somewhat inhibited by masks but Art Toronto is back with an in-person event at the convention centre. More than 60 galleries are participating with physical booths as well as an online presence; another two dozen are offering simultaneous shows in their own premises for those who want to avoid any crowds.

You’ll need proof of vaccination to enter the convention centre and tickets are timed to the half-hour. Meanwhile, the swank opening-night preview, traditionally a fundraiser for the Art Gallery of Ontario, has been postponed until 2022.

Still, from Friday to Sunday, there will be real art in real physical spaces; for the digital skeptic or the neophyte collector, browsing is back.

And from all this, there emerges a theme too: Indigenous art. About a third of participating galleries happen to be showing work by Indigenous artists, from veterans such as the Anishinaabe artist Rebecca Belmore to mid-career figures such as Maria Hupfield, an Anishinaabe artist now working in Brooklyn, N.Y., or the Toronto artist Jason Baerg, who is Cree and Métis and teaches at the Ontario College of Art & Design University. This is coincidental, reflecting the interests of Canadian gallerists and collectors, rather than any specific direction from Art Toronto. It is a trend that includes fair stalwarts such as Montreal dealer Pierre-François Ouellette who has shown work by Meryl McMaster and Kent Monkman for years and the arrival of more galleries that specialize in First Nations art including the Indigenous-owned K Art from Buffalo, N.Y., and Vancouver’s Ceremonial Art.

It also happens to dovetail with the fair’s panel on decolonizing public collections, moderated by National Gallery of Canada curator Greg Hill. That is an online event, one of a series of interviews and discussions that can be watched at home. You can also visit the exhibitors online: Their VR booths on the Art Toronto website will remain up for a week after the physical event closes.

Another in-person option, however, is being offered by some of the participating galleries in Toronto who have banded together to produce a city-wide gallery week to coincide with the fair. Last year, photography dealer Stephen Bulger couldn’t stomach the idea of online-only and organized a small pop-up fair, inviting four galleries from across the country into his Dundas Street West headquarters and allowing masked visitors to step carefully inside. That idea has taken hold and, alongside Bulger, several more Toronto venues have visiting galleries in their spaces: the Olga Korper Gallery welcomes Calgary’s VIVIANEART; Robert Birch Contemporary hosts Montreal’s Art Mûr and Feheley Fine Arts has Vancouver’s Fazakas Gallery.

Although not officially affiliated with Art Toronto, the friendly art-week idea meshes with the cross-Canada scope of a fair that has always positioned itself as a national rather than metropolitan event. For example, this year, almost a third of the participating galleries are from Montreal. One of those galleries is Hugues Charbonneau’s, and that dealer is arriving already sold out of work by two artists, both of whom address issues of Black history and identity, the Haitian-Canadian Manuel Mathieu and the Congolese-Canadian Moridja Kitenge Banza.

You can’t really put a dollar figure on Art Toronto’s activity because sales are handled by the individual galleries: The barometer of its success is simply the number of galleries that choose to come back year after year. The pandemic may have hurt museums badly but as Charbonneau’s example shows the art market itself has prospered in recent months. In 2021 Art Toronto is exhibiting resilience.

Art Toronto runs Oct. 29-31 in person at the Metro Toronto Convention Centre and online to Nov. 7. See arttoronto.ca for details.

Exquisite European art has made its way to Greenville with Golden Butterfly Studios. Handmade, fine silk filigree artwork is presented by Alek Kocevski in a tradition that’s thousands of years old.

Filigree art was started in the Middle East millennia ago and has been a time-honored tradition throughout eastern Europe, including Kocevski’s home country of North Macedonia. It was there he first encountered the intricate craftsmanship and decided to learn the trade. Fascinated by both the art itself and the art of making the filigree pieces, Kocevski decided to apprentice with a master in Macedonia before returning to South Carolina.

A Greenville resident for the past 20 years, he realized the art form was unknown in the United States and sought to showcase such mastery in the Upstate.

“I thought this would be a great thing to bring to the United States and it was a side job while I was in undergrad at Clemson,” Kocevski said.

After majoring in Biomedical Sciences at Clemson, he had planned to go to medical school but found he was unable to attend. That, Kocevski said, led him to pursue his passion for beautiful art.

Traditionally, filigree is made with silver and gold wire, taking up to a month to make a single piece and costing thousands of dollars. At Golden Butterfly Studios, the pieces are made using fine silk instead.

“This newer version with silk gives you the same elegance … but it’s more cost-effective and quicker,” Kocevski said. 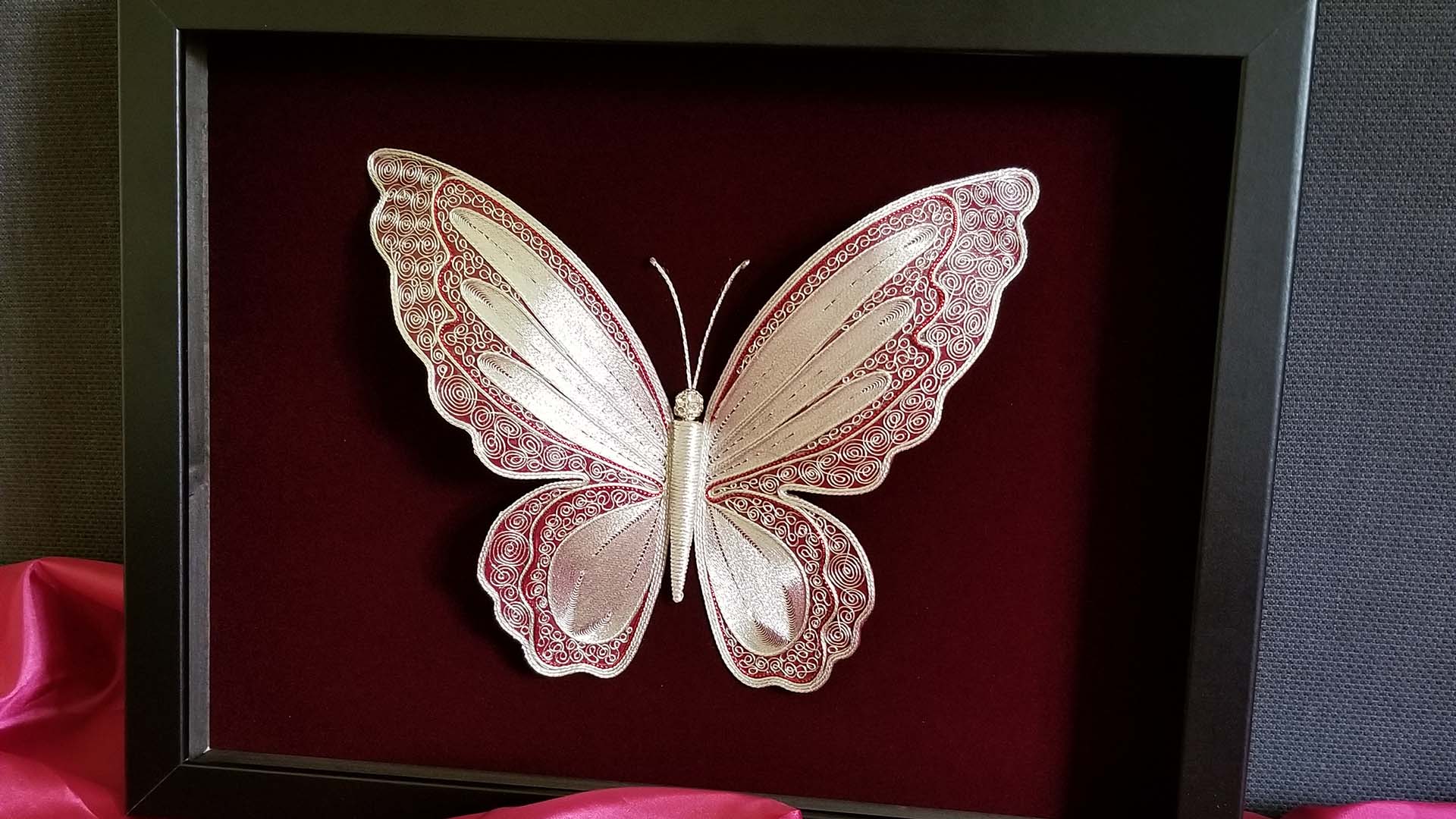 Smaller pieces can be done in under 24 hours with larger ones taking less than a week. It’s also less expensive, making this long-standing European art more attainable.

Each design is sketched by hand before silk ever gets laid over the template. Then the silk is laid out in a precise pattern requiring a steady hand and an eye for detail. After the artist has completed the design, it’s shaped to give it a more 3-D look and placed inside a shadowbox for display.

According to Koceviski, his studio offers exclusive designs in butterflies and flowers right now as they are traditionally timeless and beautiful. He likened the life of a butterfly to that of a person: Both go through similar changes and transformations in life and butterflies represent the fragility of life.

“Simply put, they bring a smile to your face,” he said.

While a permanent storefront is not available at this time, Golden Butterfly Studios offers their pieces at events and art markets around Greenville. More info can be found at goldenbutterflystudios.com or on their social media pages.

Canadian artist Jed Lind’s Gold, Silver & Lead art piece is located at the corner of Water Street and Cawston Avenue and consists of seven sculptural vehicles — all modelled after the 1979 Honda Civic — stacked on top of one another.

“Our hope is that it will become a landmark within the downtown public space and that it will stimulate lively conversations about the visual arts in our community,” said Nataley Nagy, the Kelowna Art Gallery’s executive director.

Originally presented at the Toronto Sculpture Garden’s 30th-anniversary exhibit in 2011, the sculpture was donated to the Kelowna Art Gallery in 2019. In the piece, the cars deteriorate and disassemble as they climb up the sculpture.

“Like a stack of stones marking a trail, it represents a fork in the road where humanity could’ve chosen a simpler existence, yet here we are today,” said Lind.

Lind said he got the idea for the sculpture over a decade ago when he stumbled across an old print ad that featured American architect Buckminister Fuller standing in front of a white geodesic dome and a white 1979 Honda Civic, with a tagline that read, “The man who simplified housing bought a Honda Civic. We make it simple.”

“It is a quintessentially American idea that the automobile as the embodiment of freedom, power and escape,” said Lind. “The Honda Civic became popular in America after the 1973 oil crisis when the idea that resources were finite became to take root in the culture.”

He added that he hopes that the sculpture will further conversations about the environment, consumption and collective responsibility.

“Amidst the social and cultural awakening, and the material shortages that we now face, I hope that some viewers see the piece as a reminder that our resources are not infinite, nor are our emotions,” he said.

Facebook to be called Meta in nod to its ‘metaverse’ vision