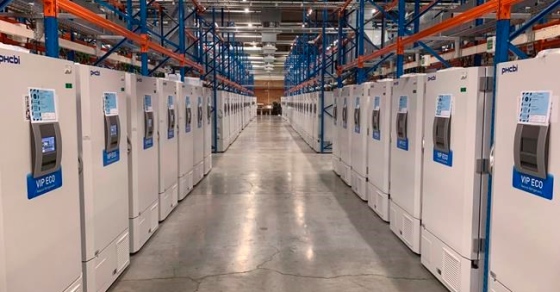 LONDON — One of the scientists behind the experimental coronavirus vaccine developed by BioNTech and Pfizer said Sunday that he was confident that it could halve the transmission of the virus, resulting in a “dramatic” curb of the virus’ spread.

Professor Ugur Sahin, chief executive of Germany’s BioNTech, said it was “absolutely essential” to have a high vaccination rate before next autumn to ensure a return to normal life next winter.

“If everything continues to go well, we will start to deliver the vaccine end of this year, beginning next year,” Sahin said. “Our goal is to deliver more than 300 million of vaccine doses until April next year, which could allow us to already start to make an impact.”

“I’m very confident that transmission between people will be reduced by such a highly effective vaccine — maybe not 90% but maybe 50%,” he said.

Pfizer and BioNTech said last week that interim results showed the vaccine was 90% effective in preventing people from getting ill from COVID-19, though they don’t yet have enough information on safety and manufacturing quality.

“What is absolutely essential is that we get a high vaccination rate before autumn/winter next year, so that means all the immunization, vaccination approaches must be accomplished before next autumn,” Sahin said.

The vaccine’s developers looked at 94 infections recorded so far in a study that has enrolled nearly 44,000 people in the U.S. and five other countries. 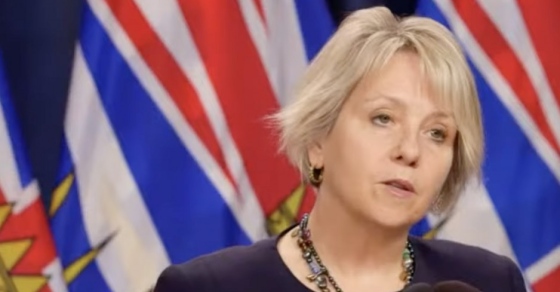 The number of British Columbians dying from COVID-19-related complications has started to ramp up, with 16 fatalities in the past 24 hours, and 58 deaths in the past four days.

The 16 deaths in a 24-hour period is a record, and it comes on the heels of 42 deaths in a three-day period, which was announced yesterday but not broken down by day. In total 457 people in B.C. have died from the virus.

Provincial health officer Bonnie Henry said November 30 that the surge in deaths was not directly linked to the record number of COVID-19 patients in intensive care units (ICU) because most of the deaths reported yesterday were seniors in long-term care homes who died in those facilities. It was not clear if that pattern continued today.

Some good news is that the number of people actively infected with the virus has fallen by 59, to 8,796.

There were 656 new COVID-19 infections identified in B.C. in the past day, including three epi-linked cases, which are presumed and not based on tests. That brings the total number of people infected by the virus in B.C., since the COVID-19 first arrived on January 28, to 33,894.

The breakdown of where the new infections are located is as follows:

One seniors’ facility, the Harrison at Elim Village in Surrey, which recently had an outbreak that was deemed to be over, once again is listed as having an outbreak.

Outbreaks at Holy Family Hospital in Vancouver and Jackman Manor in the Township of Langley are newly declared to be over.

Henry and Health Minister Adrian Dix said in their afternoon statement that there were no new community outbreaks.

There are 15 active outbreaks at seniors’ facilities in the Vancouver Coastal Health region, and they include:

The 33 outbreaks at seniors’ facilities in the ​Fraser Health region include:

Three outbreaks are at seniors’ living facilities in the Island Health region:

The Interior Health region has three seniors’ facility outbreaks, at:

Henry said that it can be hard to tell how the virus gets into seniors’ care facilities – whether the transmission starts with staff or with visitors.

“We’ve restricted visitors in long term care, as you know, because of the devastation,” Henry said yesterday. “We only have to look at this weekend to know what happens when the virus gets in.”

Interior Health has reported a record 83 new cases of COVID-19 over the past 24 hours.

The region now has 535 active cases with 18 people in hospital and four of those in critical care.

The new cases are part of 656 new cases announced by the province on Tuesday.

The province also reported 16 further deaths due to COVID-19, none of which occurred in the Interior Health region.

Active cases in the province now total 8,796, with another 10,123 people under active public health monitoring due to exposure to confirmed cases.

Elsewhere in the province, new cases include 140 in the Vancouver Coastal Health region, 408 in Fraser Health, 10 in Vancouver Island Health and 15 in Northern Health.

A cluster of cases in Revelstoke has now grown to 46 total cases, with 32 of those remaining active. The health authority is continuing its contact tracing efforts.

“This cluster illustrates that COVID-19 is in smaller rural communities as well as larger urban centres,” reads a notice from Interior Health sent to media Tuesday afternoon.

As some provinces push for clarity on when they will receive their share of Canada’s COVID-19 vaccines, one expert said Monday the government should be more transparent about the terms of its contracts with the companies making the shots.

Kerry Bowman, who teaches bioethics and global health at the University of Toronto, said it’s likely Ottawa doesn’t have the information the provinces are seeking regarding the timing and quantity of vaccine deliveries, particularly if its contracts with drugmakers are conditional.

But if that’s the case, he said, the federal government should state it clearly or risk eroding public trust in its system.

While news that COVID-19 immunizations could begin in some countries in a matter of weeks is good for Canada in the long term, it will lead to widespread frustration in the near future if the country is lagging behind, he added.

“There’s benefits to all of humankind, no matter who’s getting it,” he said.

Still, “if two weeks from now, the news is full of us watching people all over the world being inoculated, including the United States, and we’re not, there’s going to be some very unhappy Canadians.”

As well, he said, any delay in immunization translates to more COVID-19 cases and deaths, and mounting economic strain.

“People will die and other people’s lives will continue to be ruined until we pull out of it. And so, to me, whether it’s this month or that month (that we get the vaccine) is not irrelevant — it’s highly relevant,” he said.

Ontario Premier Doug Ford renewed his calls Monday for a clear delivery date for the province’s share of vaccines, stressing that “the clock is ticking” when it comes to fighting the novel coronavirus.

Ford said he was set to speak to Pfizer, one of the drugmakers that has entered into an agreement with Canada, on Monday afternoon but expected to be told the information must come from Ottawa.

The premier cited reports that other countries, such as the United Kingdom, are on track to start COVID-19 immunizations soon, adding Ontarians “need answers.”

Meanwhile, the American biotech company Moderna said Monday the first 20 million doses of its COVID-19 vaccine will be shipped to the United States next month.

The chairman of the American vaccine maker told the CBC on Sunday that Canada is near the front of the line to receive the 20 million doses it pre-ordered, confirming that the country’s early commitment to purchasing the shots means it will get its supply first.

Moderna is one of several companies to have already submitted partial data to a “rolling review” process offered by Health Canada. Rather than presenting regulators with a complete package of trial results, the would-be vaccine makers file data and findings as they become available. Canada has been looking at Moderna’s first results since mid-October.

The issue of when Canada will receive its orders came to the forefront last week when Prime Minister Justin Trudeau said the country will have to wait a bit because the first doses off the production lines will be used in the countries where they are made.

The federal government was pressed on the matter further during Monday’s question period, as some MPs called for greater transparency regarding vaccine rollout, noting other countries such as Australia have made their plans public.

Health Minister Patty Hajdu said the government has been working with the provinces and territories to ensure the plan is robust.

“Canada is well-served by the diversity of vaccines we have purchased early and in fact in great quantity. Canadians can be assured they too will have access to these vaccines that will bring us to the end of COVID-19,” she said.

VIDEO: B.C. planning for the rollout of COVID-19 vaccines in the first weeks of 2021

Ontario, Alberta and Quebec, reported 1,746, 1,733 and 1,333 new infections respectively. Together, the three provinces had 39 new deaths related to the virus.

In Manitoba, health officials stressed residents must limit their contact with others in order to bring down the numbers, as the province reported 342 new cases and 11 additional deaths.

The provincial government imposed strict measures on business openings and public gatherings more than two weeks ago, but officials said the test positivity rate remains at 13 per cent.

Nunavut, however, will begin to lift the lockdown measures it enacted in mid-November on Wednesday, as more people recover from the illness.

Only Arviat, which has 86 active cases, will continue to be in lockdown for at least another two weeks, with travel restrictions in place, Nunavut officials said.

In British Columbia, the province announced the highest number of deaths for a three-day period as it recorded 46 fatalities over the weekend.

Provincial health officer Dr. Bonnie Henry became emotional Monday as she expressed her condolences to families and thanked caregivers for their dedication.

“Health-care workers have been at the front lines, or maybe the last line of defence right now,” she says. “I know how challenging it is and I’m with you every single day, supporting you in admiration for the work that you’re doing.”

Out east, six new infections have been recorded in New Brunswick today, while Newfoundland and Labrador reported one.

On Sunday, the federal government announced it will extend a series of travel restrictions meant to limit the spread of COVID-19 into January, in light of the steady rise in case counts across the country.

Public Safety Minister Bill Blair and Hajdu said in a statement the measures, which were first enacted near the start of the global health crisis, would be in effect until Jan. 21, 2021, for travellers entering Canada from a country other than the United States.