The CST-100 Starliner astronaut capsule was successfully launched from Cape Canaveral in Florida, but an error in an automated timer prevented the craft from attaining the orbit that would have put it on track to rendezvous with the space station, NASA said.

Boeing could not immediately explain the error.

The Starliner’s debut launch to orbit was a milestone test for Boeing, which is vying with SpaceX, the privately held rocket company of billionaire entrepreneur Elon Musk, to revive NASA’s human spaceflight capabilities. SpaceX carried out a successful unmanned flight of its Crew Dragon capsule to the space station in March.

The Starliner setback came as Boeing, whose shares dropped 1.6 percent on the day, sought an engineering and public relations victory in a year punctuated by a corporate crisis over the grounding of its 737 Max jetliner following two fatal crashes of that aircraft.

The implications for any further design and testing requirements before Starliner is approved for its first crewed mission also remained unclear. The prospect that Boeing might need to repeat an unmanned orbital test flight could substantially delay NASA’s timeline and drive up costs.

The plan now is for the capsule to return to Earth on Sunday, about a week ahead of schedule, parachuting to the ground at its designated landing site in White Sands, New Mexico, said Boeing’s space chief executive, Jim Chilton.

The craft, though stable, has burned too much fuel to risk further maneuvers trying to dock with the space station at this point, NASA Administrator Jim Bridenstine said at a news conference.

Boeing officials said they were still seeking to pinpoint the cause of Friday’s glitch.

“The spacecraft was not on the timer we expected her to be on,” Chilton told reporters. “We don’t know if something happened to cause it to be that way.”

The spacecraft, a cone-shaped pod with seats for seven astronauts, lifted off from Cape Canaveral at 6:36 a.m. atop an Atlas V rocket supplied by the United Launch Alliance of Boeing and Lockheed Martin Corp.

Minutes after launch, Starliner separated from the two main rocket boosters, aiming for a link-up with the space station on Saturday 254 miles (409 km) above Earth. But difficulties ensued with thrusters designed to boost the capsule’s orbit to the proper altitude.

“When the spacecraft separated from the launch vehicle we did not get the orbital insertion burn that we were hoping for,” Bridenstine said.

Bridenstine said the timer error caused the capsule to burn much of its fuel too soon, preventing it from reaching the desired orbit. NASA and Boeing tried to manually correct the automated errors, but mission control commands sent across NASA’s satellite communications network were inexplicably delayed.

“The challenge here has to do with automation,” Bridenstine said, adding that astronauts on board would have been able to override the system that caused the malfunction.

Bridenstine said he would not rule out the possibility of allowing Boeing to proceed directly to its first crewed Starliner flight, depending on findings from the investigation of Friday’s mishap.

Nicole Mann, one of three astronauts slated to fly on Boeing’s first crewed flight test, told reporters, “We are looking forward to flying on Starliner. We don’t have any safety concerns.”

NASA astronaut Mike Fincke added, “Had we been on board, we could have given the flight control team more options on what to do in this situation.”

Friday’s test represented one of the most daunting milestones required by NASA’s Commercial Crew Program to certify a capsule for eventual human spaceflight — a long-delayed goal set back years by development hurdles at both Boeing and SpaceX.

The U.S. space agency awarded $4.2 billion to Boeing and $2.5 billion to SpaceX in 2014 to develop separate capsule systems capable of ferrying astronauts to the space station from U.S. soil for the first time since NASA’s space shuttle program ended in 2011. NASA has since relied on Russian spacecraft for hitching rides to the space station.

NASA initially had expected to begin crewed flights aboard the Starliner and the Crew Dragon capsules in late 2017. Both companies are currently aiming for next year, a time frame reinforced in a statement on Friday from the office of U.S. Vice President Mike Pence, who chairs the National Space Council.

“Vice President Pence was assured that NASA will continue to test and improve, in order to return American astronauts to space on American rockets in 2020,” it said.

In a message of sympathy for his Boeing rival, Musk said on Twitter, “Orbit is hard,” adding, “Best wishes for landing & swift recovery to next mission.”

Occupying one of Starliner’s astronaut seats on Friday was a mannequin named Rosie, outfitted with sensors to measure the pressure a real astronaut would endure on ascent to the space station and during hypersonic re-entry back through Earth’s atmosphere.

WASHINGTON – NASA’s Perseverance explorer will land on the red planet on Feb. 18, but the rover won’t be the only newly arrived robotic explorer. The wheeled robot carries the Mars Helicopter Ingenuity on its belly, and NASA has posted a handy list of things to know about this mission. Although, several of the six facts seem to drive home that NASA doesn’t really know if Ingenuity is going to work. In fact, it could still be seen as a success at the Jet Propulsion Laboratory even if it crashes on its first flight, Ryan Whitwam reports for Extreme Tech. Continue reading original article.

January 27, 2021 –The Mars helicopter weighs in at four pounds on Earth (and 1.5 pounds on Mars) and has rotors that come in at four feet tip-to-tip. It is powered by a solar panel that charges Lithium-ion batteries, which allows for one 90-second flight per Martian day. In that time, it can fly up to 980 feet at an altitude up to 15 feet. It will fly autonomously.

NASA’s Mike Hopkins and Victor Glover floated out early and headed straight to Columbus, one of the three high-tech labs at the orbiting outpost.

They hauled with them a fancy new antenna for Columbus that will provide faster communication with European researchers via satellites and ground stations. The boxy antenna is the size of a small refrigerator.

Danish astronaut Andreas Morgensen guided the spacewalkers from Mission Control in Houston, where controllers wore masks and were seated apart because of the pandemic.

The spacewalkers also needed to hook up power and data cables for an experiment platform for science research outside the European lab that’s been awaiting activation for almost a year.

SpaceX delivered the platform named Bartolomeo to the space station last spring. The shelf was installed with the station’s robot arm, but had to wait until Wednesday’s spacewalk to get hooked up and activated.

Airbus, which built and runs Bartolomeo, is selling space on the platform for private research projects. It’s Europe’s first commercial venture outside the station.

Hopkins and Glover will perform a second spacewalk on Monday to complete battery upgrades to the station’s solar power grid. The latest spacewalk was the third for Hopkins and first for Glover.

They are part of SpaceX’s second astronaut flight that launched in November. Their docked Dragon capsule was visible on NASA TV during the spacewalk. 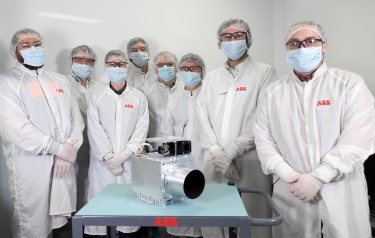 An optical sensor manufactured by ABB was deployed with the successful launch of satellite Hugo from GHGSat, the emerging leader in greenhouse gas sensing services in space.

The ABB supplied optical sensor can map methane emissions from space at a resolution that is 100 times higher than any other sensors. Whilst previously only larger regions could be surveyed, for the first time the new greater granularity now allows the identification of the source of emissions. An additional nine units are currently under manufacture at ABB to be launched by the end of 2022 ready to be on-board across the first private satellite constellation dedicated to emission measurement.

Space offers the ideal location to freely monitor emissions across jurisdictions and quantitatively report on improvements. The ABB sensors will provide valuable insights which will enable governments and industries around the world to meet their emission reduction targets and reduce the negative impact on global warming.

“We selected ABB for its ability to deliver world-class instruments while meeting the challenges of a new space company like ours,” said Stephane Germain, CEO of GHGSat. “We strive to innovate for the needs of the future, and we’re excited to work with ABB to achieve that.”

“ABB shares GHGSat’s goal of reducing emissions through the creation of their greenhouse gas sensing constellation. Our selection as the manufacturer for these advanced sensors demonstrates our competitiveness and strong fit with the private space sector requirements,” said Marc Corriveau, General Manager ABB Measurement & Analytics Canada.

“The space revolution is well underway and ABB with its heritage of unique space instruments and serial production of advanced measurement sensors for industrial applications is extremely well positioned to serve this emerging sector,” he continued.

GHGSat announced the constellation contract award with ABB in October 2020, with first deliveries in 2021. The unit launched by SpaceX was a single unit procured by GHGSat from ABB two years ago ahead of a selection for the constellation.

With its involvement in the Canadian SCISAT mission and the Japanese GOSAT series of satellites, ABB has been at the forefront of the field of greenhouse gas sensing from space for more than two decades. ABB optical equipment already in space cumulates more than 100 years of reliable operation. The SCISAT sensor tracks long-term subtle composition changes in the earth’s atmosphere down to parts per trillion of more than 70 molecules and pollutants since 2003. Weather agencies across the world base their predictions on ABB equipment flying onboard the US National Oceanographic and Atmospheric Administration (NOAA) weather satellites (NPP and JPSS), which saves lives by improving the timeliness and accuracy of weather forecasts for up to seven days.

ABB is also a global leader in earthbound continuous emission monitoring with over 60,000 systems installed in more than 50 countries worldwide. Continuous Emissions Monitoring Systems (CEMS) continuously record and evaluate emission data across all industries. They provide important information for the environmental and economic operation of production facilities. The range includes the ACF5000 that accurately and reliably monitors up to 15 gas components simultaneously.